Emmy-winning actress Robin Wright is a ‘force of nature’ who has taken full charge of the show after it was rocked by Kevin Spacey’s departure in disgrace, one of its stars tells DailyMailTV.

Cody Fern, who is to play a new role in the sixth series of the Netflix hit, said that Wright had brought a ‘let’s do it’ mentality to the set as she acts, directs and produces in parts of its final season.

And one of the show’s executives also revealed that its success is likely to be followed by spin-off series for two of its breakout stars. 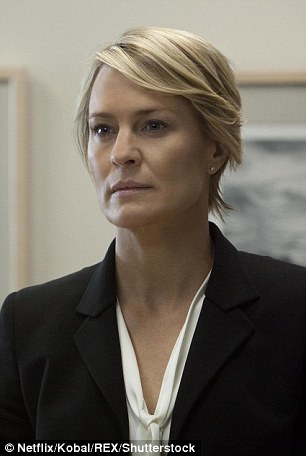 Robin Wright (pictured) has stepped up to lead the cast and crew of House of Cards after Kevin Spacey’s departure, says her new co-star Cody Fern. Wright, who plays Claire Underwood (Wright pictured right in character) on the show, acts, directs and produces in parts of the final season

Daniel Minahan, who was executive producer of the fifth season of the show, said that both Boris McGiver and Michael Kelly were likely to be given their own platforms.

Fern told DailyMailTV how the embattled team on the troubled Netflix drama is stronger and more united since the Spacey scandal and credited Wright for it.

The Australian actor, 29, said: ‘I think that Robin is really stepping up in a way that everybody is excited about. 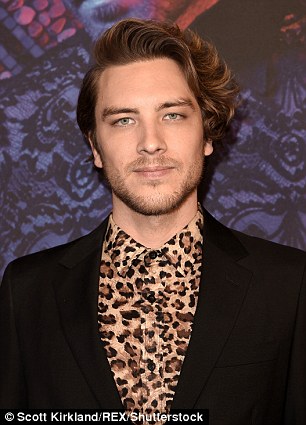 Cody Fern, who is to play a new role in the sixth series of the Netflix hit, said that Wright had brought a ‘let’s do it’ mentality to the set

‘I get to work with her and I am thrilled about it. So the energy on and off set is one of let’s do this… you know, let’s do this – let’s overcome this period of time where we are focusing on men and let’s jump into the women. And let Robin have that.

‘You can expect what you had always expected from Robin, which is phenomenal acting, absolute commitment and she is a force of nature.

‘That is thrilling. It is changing.’

Wright was understood to be the key reason Netflix bosses decided not to axe the series for good last November following Spacey’s departure amid a string of allegations of sexual misconduct.

Minahan added that under Wright, he has confidence the show will not skip a beat without Spacey as screen monster Frank Underwood.

‘I was really pleased to hear that they were going to continue for another season regardless of what has happened with Kevin,’ he said.

‘I feel like season five ended with the president in exile, and I feel that given everything else that is happening in the world right now, Robin Wright is the most compelling actress I have ever worked with.

‘And I am dying to see what she does with the final season. I have complete confidence in everyone at Netflix that they did the right thing.’ 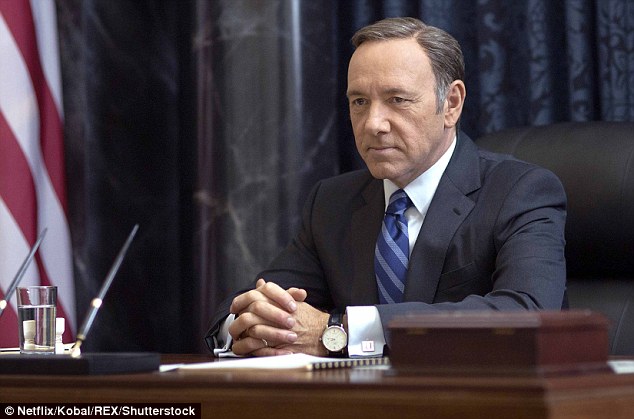 Wright was understood to be the key reason Netflix bosses decided not to axe the series for good last November following Kevin Spacey’s departure amid a string of allegations of sexual misconduct. Pictured above, Spacey in his role as Frank Underwood in the show

Minahan gave a hint that the end of House of Cards will not be the end of all its character.

‘I don’t want to get into trouble but I kind of feel that Boris McGiver who plays the journalist at the Washington Post will be the most likely spin off character, he is one of the most wonderful actors they have there,’ he said. 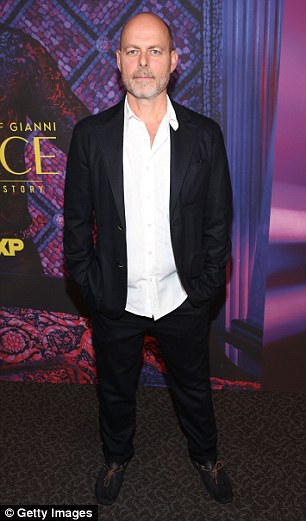 Daniel Minahan, who was executive producer of the fifth season of the show, said there could be spin-offs on the show

He also suggested that Doug Stamper, Spacey’s sinister fixer who is played by Michael Kelly, could make a similar spin-off success.

‘Michael Kelly created an amazing character. I would be happy to work with Michael and Boris,’ he said.

Fern and Minahan spoke as they attended the FYC Red Carpet Event for ‘The Assassination of Gianni Versace: American Crime Story’ at the Directors’ Guild in Los Angeles.

In January Netflix content chief Ted Sarandos opened up about the studio’s decision to immediately fire Spacey – essentially confirming that Spacey had acted inappropriately on set.

He said: ‘I think it gave us all an opportunity to soul search right away and I love that we were able to very quickly come to the conclusion that when it comes to having a workplace that is safe, where people are equal and respected and are judged by the quality of their work and not who they are, not to be in a position to be taken advantage of by people of power.

‘The best way to set that environment is, no matter who it is, they’ve got to go.

‘We have to be able to set a very hard line in the sand. We treat people at Netflix in our offices with great professional respect and dignity and I need our sets to feel like an extension of that work culture.’ 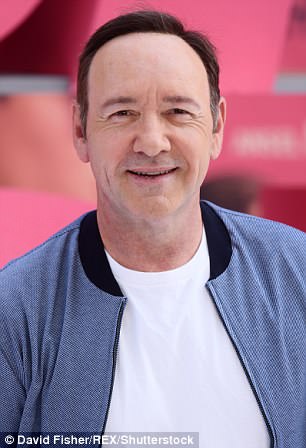 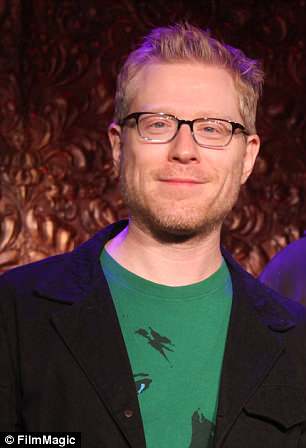 Spacey (left) was fired from all Netflix projects, including a biopic of writer Gore Vidal, as his sex shame emerged. The star has been accused by several men, including many who were underage at the time, of sexual harassment and assault, including Adam Rapp (right)

Sarandos refused to leak details on how Spacey’s departure will be explained, but he said the network was committed to not letting the production team suffer because of one person’s bad behavior.

Spacey was fired from all Netflix projects, including a biopic of writer Gore Vidal, as his sex shame emerged.

The star has been accused by several men, including many who were underage at the time, of sexual harassment and assault.

Eight people who worked on House of Cards have also reportedly accused Spacey of sexual harassment or assault.

The actor’s reps said that Spacey will ‘seek evaluation and treatment’ following the series of sexual misconduct allegations against him.

In November DailyMail.com revealed the star checked into a luxury $36,000-a-month rehab center in the Arizona desert to receive treatment for sex addiction.

The American Beauty actor’s public apology to actor Adam Rapp, who said Spacey made a sexual advance on him at age 14, sparked outrage when he chose to come out as gay in the same statement.

Days earlier Netflix announced that the sixth season would be its last.