An artificial intelligence-equipped robot named ‘Curly’ beat one of the world’s best curling teams by quickly adapting to changes in the ice, its developers claim.

Curling is a sport in which players slide stones on a sheet of ice towards a circular target, with the aim of the stones come to a rest as close to the centre as possible.

Curly throws the stone but doesn’t do the job of brushing away loose ice in front of the stone as it moves, known as ‘sweeping’.

It was developed by researchers from Korea University, who said this development narrows the gap between computer simulators and the real world.

It’s hoped the deep learning techniques developed for Curly could be applied to other robots that need to work ‘in the real world’ and adapt to changing conditions. 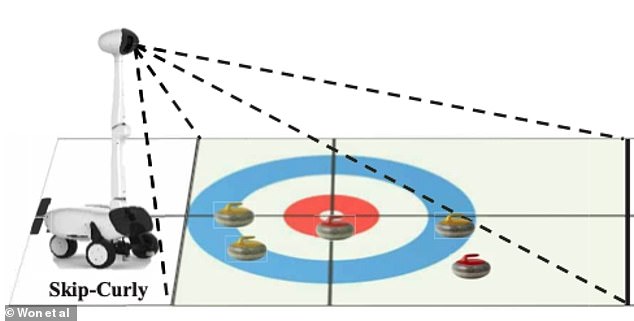 An artificial intelligence equipped robot named ‘Curly’ beat one of the world’s best curling teams by adapting to changes in the ice, its developers claim. It is able to scan the ice and the playing field, analyse the results and adapt its next throw

One of the world’s oldest sports, curling originated in the 16th century in Scotland, where games were played during winter on frozen ponds and lochs.

‘Curly’ brings the sport firmly into the 21st century and it is all thanks to an artificial intelligence system in its ‘brain’, built by Dr Dong-Ok Won – a brain engineer.

The researchers used a technique called deep reinforcement learning (DRL) that is based on trial and error to enable Curly to compensate for uncertainties in the game.

Artificial intelligence-driven machines have already beat world champions at games like Chess and Go; this brings the machine competitors into the world of physical sports.

Prof Won said: ‘Curling has been described as a combination of bowling and chess. It is a turn-based game in which two teams play alternately on the ice sheet, requiring a high level of strategic thinking and performance.’

The AI works by capturing information about changing conditions on the ice sheet through the robot’s mistakes in previous throws.

The system meant Curly only needed to complete a couple of calibration moves beforehand to detect changes in the ice.

‘The game of curling can be considered a good test bed for studying the interaction between AI and the real world,’ said Won.

‘In curling, the environmental characteristics change at every moment, and every throw has an impact on the outcome of the match.

‘Furthermore, there is no time for relearning during a curling match due to the timing rules of the game. 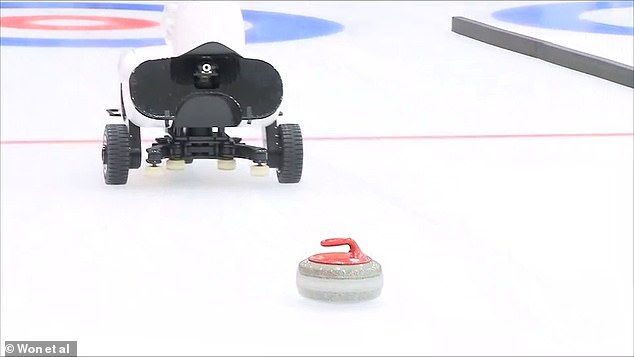 The robot was developed by researchers from Korea University, who said this development narrows the gap between computer simulators and the real world

‘Here, we report a curling robot that can achieve human-level performance in the game of curling using an adaptive DRL framework.’

Curling became popular in South Korea when it hosted the 2018 Winter Olympics, with its women’s team – known as the ‘Garlic Girls’ – winning the silver medal.

The study, published in the journal Science Robotics, closes a phenomenon dubbed the ‘sim-to-real gap’ – where robots that perform well in simulations fail in the unpredictable and difficult-to-model conditions of the real world.

‘Applying AI technologies to the real world is a challenging problem,’ said Won. 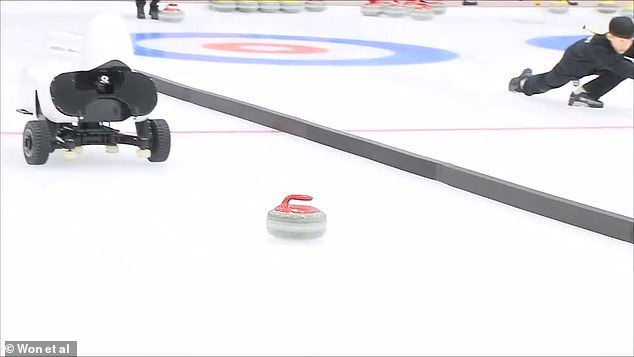 ‘Operating beyond the confines of a laboratory means dealing with unknown factors, such as an environment that varies over time, that can have an effect on the performance of an AI system.

‘Moreover, the real world offers many uncertainties which may be too complex and ill-defined to be modelled with sufficient accuracy.

‘So it’s necessary to incorporate uncertainty into modelling efforts and to measure and approximate changes in real-world environments.’

The method is also transferable to a range of other complex applications, said the researchers, including having robots solve tasks on a human level.

The findings have been published in the journal Science Robotics.