How I cured my panic attacks: Grantchester’s Robson Green reveals how crippling anxiety on set inspired his new series of bracing escapes

By Tim Oglethorpe For Weekend Magazine

When Robson Green suffered a terrifying anxiety attack on the set of ITV crime drama Grantchester a couple of years ago, two things happened. In the short term it made him question his career, and he sought an escape through cold water swimming, fishing and hiking.

In the longer term it was the catalyst for his new series, Robson Green’s Weekend Escapes, which sees him travel the North-East of England, trying everything from paddleboarding to sketching in the company of famous friends who are also from the area.

‘The series is made by my own production company, and it was in the brief to make a programme that aims to improve mental health,’ says Northumberland-born Robson, who narrates the 15-part series. ‘It’s mental health-lite – it’s more about people enjoying themselves in the great outdoors. But we do mention it to remind people how important it is.’

Robson, 58, says his own mental health was in a poor state when filming Grantchester, in which he plays DI Geordie Keating, during the pandemic in 2020. ‘I need to make a connection with the people I’m working with, and wearing masks during rehearsals meant I couldn’t do that,’ he says.

‘I couldn’t hear what they were saying, everything was muffled. I started questioning what I was doing, but I had to carry on because I employ people through my production company. I didn’t want to let anybody down. But when I suffered a panic attack on set, which left me dizzy and with my heart rate through the roof, I realised I really did need to find a way out.’

If acting in masks is unnatural, Robson decided it made sense to do something entirely natural. So he went fishing, swimming and hiking in some of the UK’s most beautiful places. ‘It saved me,’ he says. ‘Had I stayed in that studio environment and only talked about the issues rather than dealing with them, it could have been… well, an interesting result.’

I felt dizzy and my heart rate was through the roof. I had to find a way out… the great outdoors saved me

The show kicks off with Robson cycling along the Northumberland coast and paddleboarding with ex-footballer Les Ferdinand, who as a Newcastle United player was a hero of Robson’s. The pair take several unwelcome dips in the cold North Sea, but those unscheduled plunges are about as risky as Robson’s adventures get, as the focus is firmly on enjoyment rather than danger and physicality. 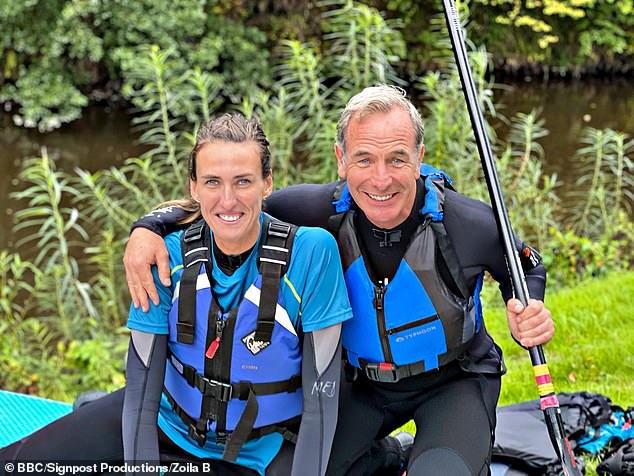 There’s plenty of fun when Robson and TV presenter Steph McGovern race kite buggies, and when he revives his singing career doing karaoke with England Euros football hero Jill Scott. ‘Jill was surprised at how good a singer I was,’ says Robson, who had three No 1 singles and two No 1 albums in the 1990s as half of Robson & Jerome. ‘She thought it was all autotune, so I replied, ‘I thought you were remote-controlled from the side of the pitch!’

The pace slackens when Robson is accompanied by his Grantchester co-star Tom Brittney on the world’s oldest railway in Co. Durham, and joins Shakespeare & Hathaway star Mark Benton for sketching in North Yorkshire. One idea that didn’t get off the ground, though, was for the opening sequence of the show.

‘I wanted to parachute out of a plane, and when the parachute opened it would say ‘Robson Green’s Weekend Escapes’. But I was filming Grantchester at the same time, so I can understand why executives said no. Losing the presenter of a documentary and one of the leading actors in a drama because his parachute failed would not have been the best outcome…’