DO rock the boat! Fans of Jon Bon Jovi can now sail around the Caribbean and Mediterranean with him

Bon Jovi fans will be able to sail around the Caribbean and Mediterranean with the rock band’s frontman.

Jon Bon Jovi is hosting two voyages on board Norwegian Cruise Line ships, billed as Runaway to Paradise, where passengers will be treated to performances and a Q&A session with the singer.

There is also the chance to meet Jon and pose for selfies – and everyone on the ship gets an autographed lithograph.

Bon Jovi fans will be able to sail around the Caribbean and Mediterranean with the rock band’s frontman, Jon Bon Jovi, who is hosting two cruises with Norwegian Cruise Line

The first sailing takes place next month from April 12 to 19, and starts in Miami with a stop off in Nassau in the Bahamas on board the Norwegian Jade, before heading back to the US.

Both cruises will also feature performances from bands including Kings of Suburbia and Slippery When Wet.

There will also be a Hart N Dagger shop selling items from Jon’s clothing line and a pop up of The Soul Kitchen, the singer’s restaurant in New Jersey.

Wine tastings will be available via Hampton Water, the wine brand owned by Jon and his son Jesse. 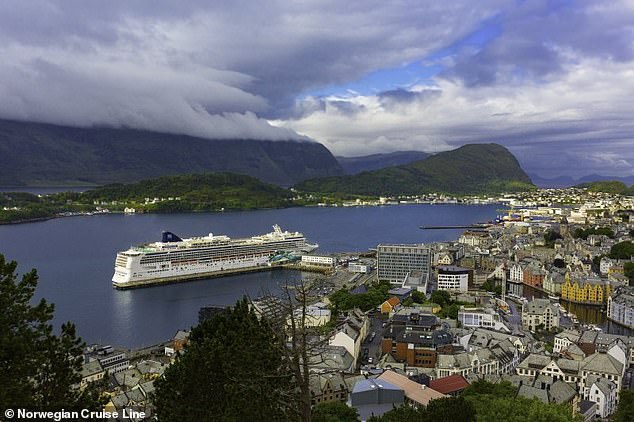 The first of the sailings will take place next month from Miami to the Bahamas and back on board the Norwegian Jade, pictured

Prices for the Caribbean cruise start from $739 (£566) for an interior cabin based on four people sharing and for the Mediterranean voyage they start at $950 (£725).

But Jon Bon Jovi isn’t the only celebrity making an appearance on a cruise.

This year, rapper Cardi B announced plans to play on a ship, while Oprah Winfrey hosts sailings on the Holland America line.

Next year, a cruise themed on classic TV comedy on The Golden Girls will set sail from Miami.