Roger Federer practices among the public at Central Park

Roger Federer may be a multi-millionaire and arguably the greatest tennis player of all time, but that doesn’t mean he’s too good to use public courts.

On Wednesday, the Swiss tennis star gave New Yorkers a treat when he turned out to practice at the public courts in Central Park.

After the afternoon practice session, Federer tweeted some pictures of him playing on one of the center’s three hard courts.

‘When in Central Park,’ he said in another post.

Roger Federer gave New Yorkers a treat on Wednesday, when he practiced at the public tennis courts in Central Park 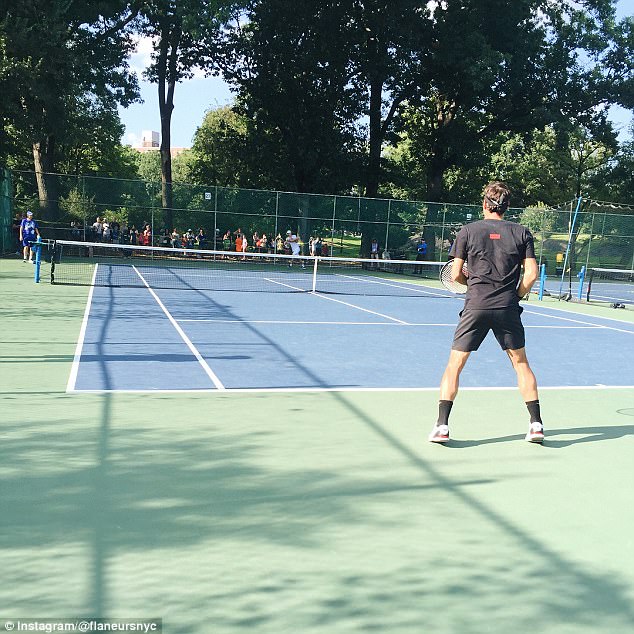 The Swiss tennis star is currently competing in the U.S. Open. He decided to get his practice session in at Central Park, which is closer to his hotel, than drive out to the Billie Jean King National Tennis Center in Queens, where most of the players practice

Less than 24 hours before, Federer played his first round match at the U.S. Open at Arthur Ashe Stadium, narrowly defeating 19-year-old American Frances Tiafoe in a nail-biting five-setter.

While most players competing in the U.S. Open practice on site in Queens at the Billie Jean King National Tennis Center, Federer decided to opt out and practice on one of the hard courts at Central Park, which is closer to his hotel.

While the courts are open to the public, they aren’t free. Players must either have a yearly $100 permit or a $15 single play permit. Reservations cost an additional $15 and wait times can be excruciating long during popular hours in the summer.

The Central Park courts are considered some of the best in the city, and draw serious tennis players, but the 19-time Grand Slam champion quickly drew attention, and a crowd of fans started gathering around the court to watch him play with his hitting partner.

Inside Tennis’ Lucia Hoff reported that workers at the courts learned that Federer was going to drop by about an hour beforehand. He was accompanied by former ATP pro Eric Butorac and some extra security. Butorac has acted as Federer’s left-handed hitting partner in the past, suggesting that he’s already preparing for a match up against rival Rafael Nadal. 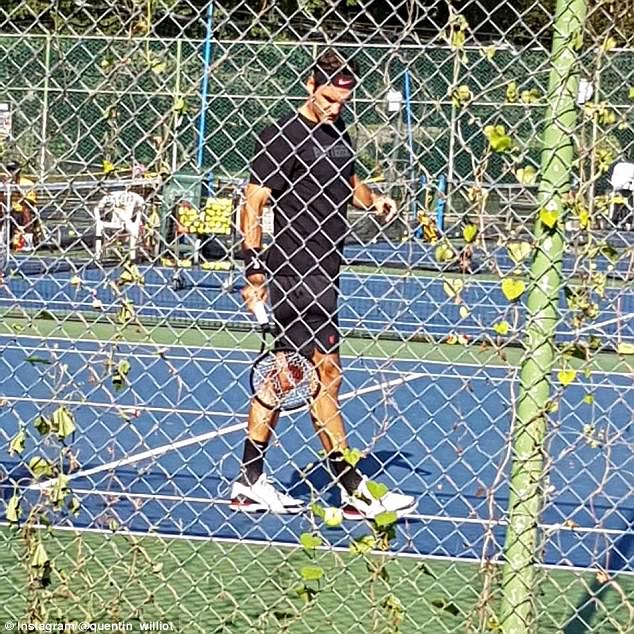 While the Central Park courts are some of the best in the city, and draw a serious tennis playing crowd, Federer stuck out like a sore thumb 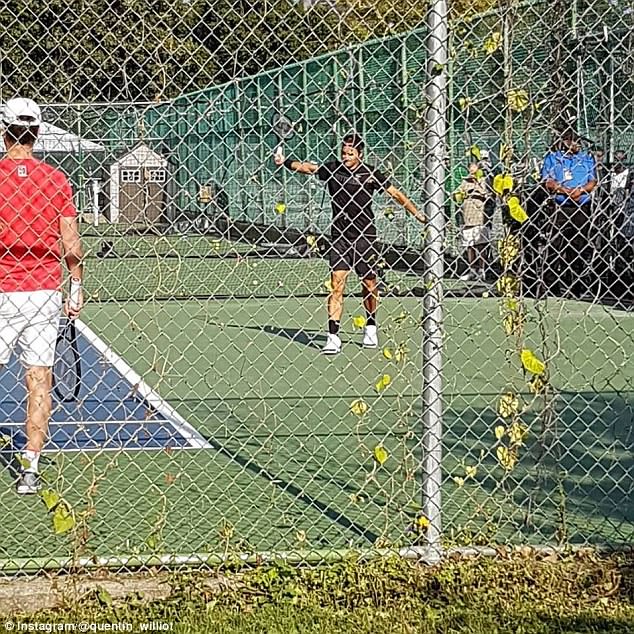 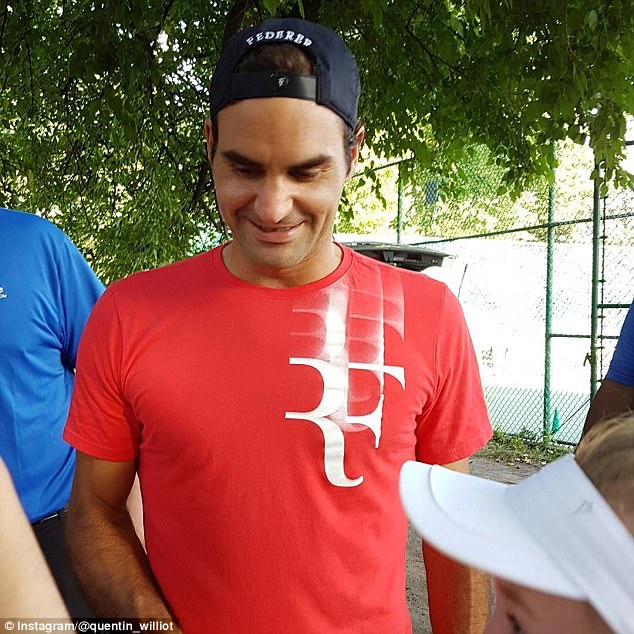 Federer was all smiles when he greeted fans outside the courts, signing autographs and stopping for pictures

If Federer keeps up his winning streak, he could face Nadal in the semi-finals – which, despite their long-standing rivalry, will actually be their first showdown at the U.S. Open.

Fans will no doubt be pretty much split between the tennis megastars if the two do in fact come head to head.

Federer is set to face Russia’s Mikhail Youzhny Thursday afternoon in the second round of the tournament.

If he wins, it will be his 80th victory at the Open, leaving him behind only Jimmy Conners in most victories at the American Grand Slam. Conners has 98 victories. 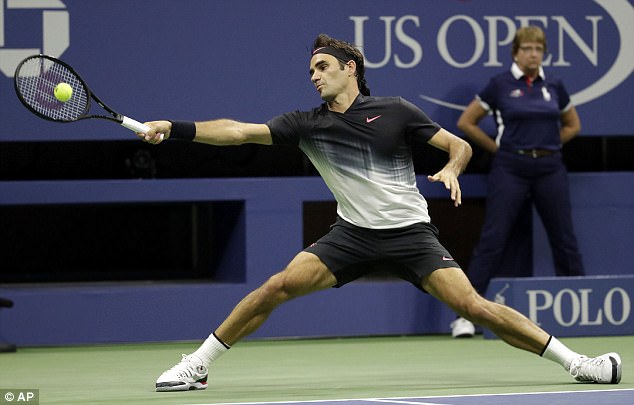 Federer’s practice session came less than 24 hours after his nail-biting first match against 19-year-old American Frances Tiafoe in the first round of the U.S. Open 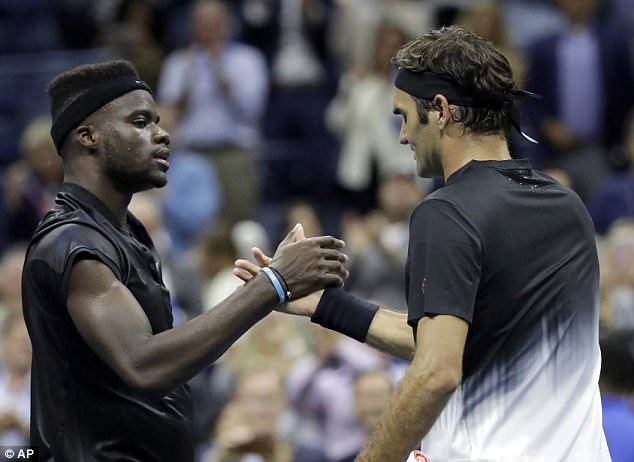 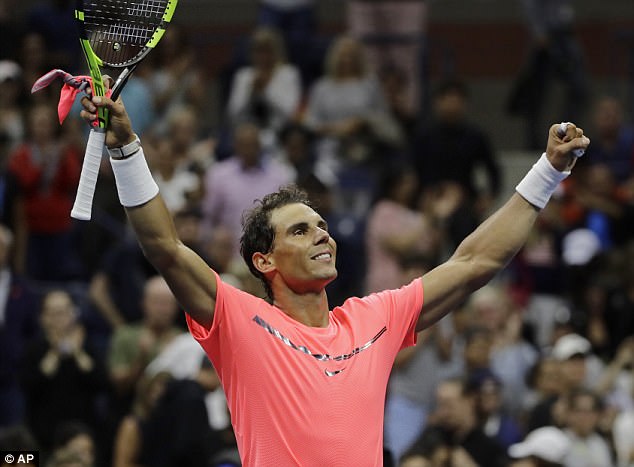 If Federer continues his winning streak, he could face Spanish rival Rafael Nadal (pictured Tuesday) in the semi-finals