Rolls-Royce shares plunged as investors fretted about the departure of chief executive Warren East and the group’s exposure to Russia.

East said he will step down as boss by the end of this year having taken the reins in 2015 and battled through the Covid crisis.

And as revealed by the Mail last month, Rolls confirmed it has kicked off the search for his successor. With war in Ukraine rattling financial markets, Rolls shares fell 13 per cent, or 15.32p, to 102.38p.

Exit: Rolls Royce boss Warren East (pictured) said he will step down as boss by the end of this year having taken the reins in 2015 and battled through the Covid crisis

Analysts described East’s departure as ‘a huge blow’ for the company. But the plunge in its share price also came amid concerns about Rolls’ exposure to Russia.

The engineer gets around a fifth of the titanium it uses for its jet engine rotor blades from Russia while its engines power some of the country’s commercial airliners.

East, 60, said it has been sourcing titanium from other suppliers in recent months.

‘Our assumption is that we won’t be taking titanium from Russia for some time,’ he said.

But its important aviation division could also be hit too – particularly following sanctions on Russian airlines including Aeroflot.

The money still needs to be transferred and the cost of transferring that money still has an effect on the Exchequer.’

East said the impact would probably be small on Rolls’ business.

The company supplies engines for Aeroflot planes. He added: ‘Sanctions are sanctions. I don’t think we’ll be servicing those engines any time soon.’

East made the comments as the FTSE 100 group returned to the black. It made a profit of £124million in 2021 having slumped to a £3billion loss in 2020 when it was hammered by lockdowns that grounded planes and brought international travel to a standstill for months at a time. 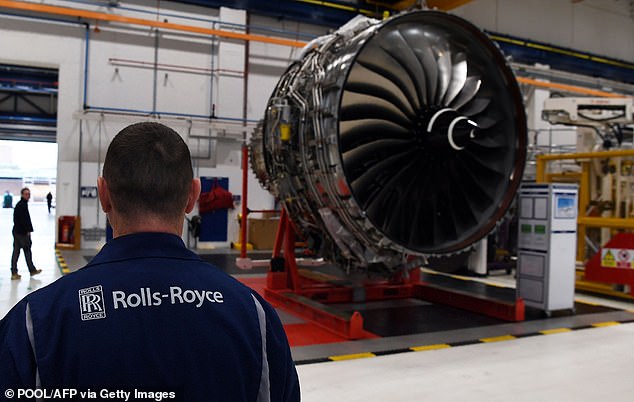 Key component: Rolls-Royce gets around a fifth of the titanium it uses for its jet engine rotor blades from Russia while its engines power some of the country’s commercial airliner

The company at that time made about half its income from servicing engines on big planes, but this now makes up around a third of its business.

It has been making progress with plans to build a fleet of mini nuclear reactors, which has received government backing. Rolls owns 80 per cent of the firm in charge of the project.

East steered the company through the worst of the pandemic by slashing 9,000 roles and raising fresh funds.

It was the third restructuring Rolls had seen in the space of five years. He took over in 2015 after a string of profit warnings under his predecessor John Rishton.

East said the task of leading the company had at times been ‘scary’ but added he was leaving as the company was ‘coming into the end of one phase’ and could move on.

Even though the company returned to profit, its forecast for only a slight improvement in revenue next year disappointed investors. It made £11.2billion last year.

He said: ‘East was a key component in the turnaround plan seen at the beginning of his tenure, and has been at the forefront of this latest one.

‘The last thing the business needs in choppy waters is for the captain of the ship to leave his post.’