Around 1,000 Roma fans queued overnight and in the rain to buy tickets for the Champions League semi-final second leg against Liverpool at the Stadio Olimpico in two weeks’ time.

Tickets for Roma’s biggest European game in 34 years went on sale at 10am on Wednesday and fans were desperate to ensure they did not miss out. Police provided coffee for the hardy supporters waiting in line.

Liverpool host Roma in the first leg at Anfield next Tuesday before the Italians get their chance to exact revenge for their defeat in the 1984 final when they meet again on May 2. 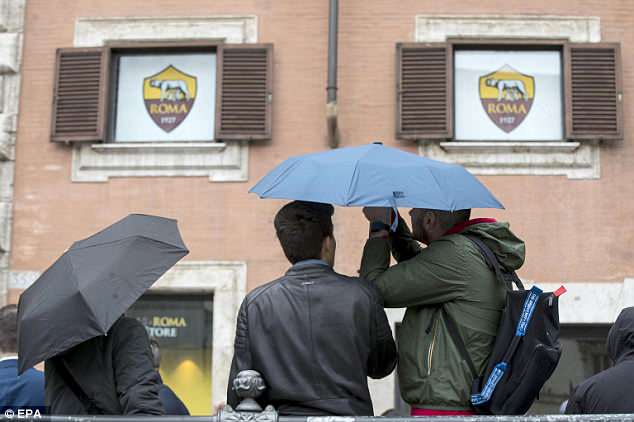 The Reds won their fourth European Cup by beating Roma inside their own ground in 1984. After a 1-1 draw, in which Phil Neal and Roberto Pruzzo scored, followed by extra-time, Liverpool won on penalties with Alan Kennedy famously slotting the winning spot-kick.

Roma went into European exile for nearly 20 years thereafter, and have not reached the semi-final of any European competition since the 1991 UEFA Cup, where they beat Brondby but lost to Inter Milan in the final.

‘I’ve got three generations of Roma fans at home and I hope we can gain our revenge [for defeat to Liverpool in the 1984 final] in this game,’ 85-year-old Vincenzo Ricci, among those waiting through the night, told Roma News.