‘Roma have set-pieces as well but they don’t play only set-pieces,’ Klopp said. ‘Their boys play sometimes on the ground and then you can play football.’

Virgil van Dijk struck a similar tone, admitting the manner of West Brom’s comeback provoked raised voices in the dressing room, but insisted it would be a different story in Tuesday’s Champions League semi-final.

‘They are fighting for their lives so in the end they are very direct, balls into the channel, work hard, trying to get fouls and free-kicks, and we didn’t deal with that how we should have,’ said Van Dijk.

‘Everyone gets upset. The way we conceded those goals is something to be angry about. We need to do better. You have to tell each other the truth. You cannot be nice and happy when we want to achieve so much as a team. But there is no reason to panic.

‘We shouldn’t even be talking in the same context. If we look at the goals it was just roles we had and didn’t follow. We need to switch on again and do the same things that we always did. I am not worried. There is no need to stress at all.’ 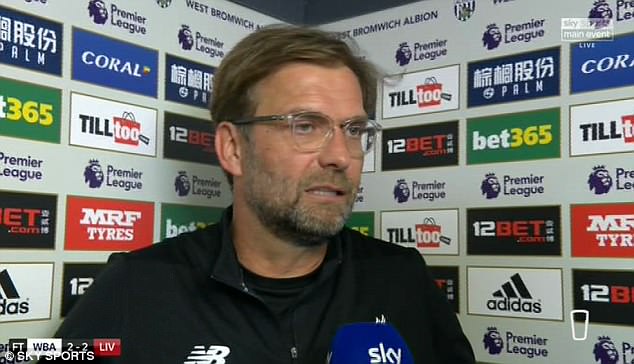 A big European night at Anfield focuses minds in a way that an afternoon at the Hawthorns when 2-0 up might not. And Liverpool’s usual defence was altered.

But the late strikes by Jake Livermore and Salomon Rondon, from a corner and free-kick respectively, will provide Roma with encouragement, and possibly even a map to goal that fits their approach. The Italians have unsettled Chelsea and Barcelona with a direct style that will test Liverpool’s defensive weakness.

So while Klopp somewhat bitterly described West Brom’s spirited response as ‘useless’ in reflection of their Premier League status, the Liverpool manager would be misguided to totally dismiss it when planning for this enormous match ahead. 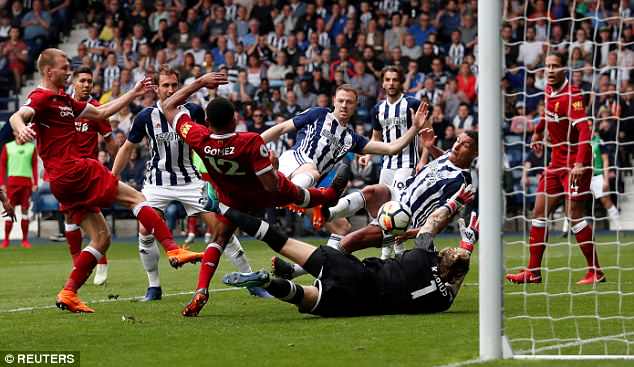 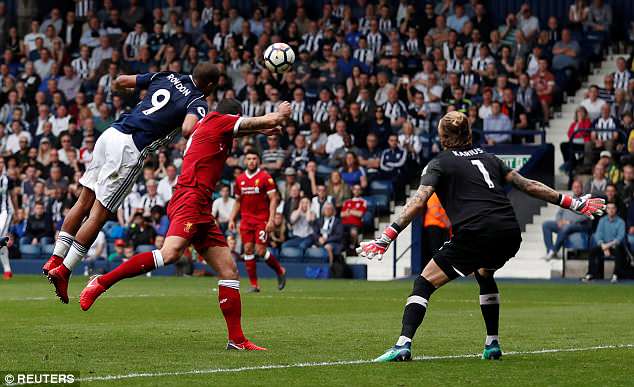 Livermore repeatedly blocked Loris Karius at set-pieces and, though European officials may penalise such a tactic, the Liverpool keeper did not look in command of his area.

Karius saved Craig Dawson’s shot but was unable to stop Livermore’s rebound. For West Brom’s second, Rondon lost Roberto Firmino and was played onside by Dejan Lovren, who had dropped deeper than his colleagues to try to rescue the situation. But the ball was too accurate and Rondon too strong.

After a first goal since October 2015 for Danny Ings and a 41st of the season by Mohamed Salah, Liverpool’s lapses were a shock.

Naturally, they will focus on what they do well in attack in the knowledge that Salah, Firmino and Sadio Mane can devastate any defence. ‘We have a massive game at Anfield and hopefully we can get a good result,’ said the Dutch defender. ‘It will be hard work and we need to be ready for anything. I don’t fear anyone.’

Despite the rousing finale, West Brom are destined for more mundane matters and Brunt conceded the coming months would be important for the club in trying to climb out of the Championship at the first attempt. ‘It’s going to be a big summer for everybody and a tough one for some people at board level,’ said Brunt. ‘People will come and people will go and we need to make sure we get the balance right.’