A rare Roman gaming-piece once used in the ‘Game of Mercenaries’ that was made from polished bone has been unearthed at a building site in Chester.

The lozenge-shaped ‘gaming’ artefact dates back about 2,000 years and is about 1.14 inches long, featuring a common Roman of a ring and dot motif.

The piece is from the game of Ludus Latrunculorum, or ‘Game of Mercenaries’, a two-player military strategy game played throughout the Roman Empire.

Archaeologists found the piece while assisting construction teams on the Chester Northgate development, which will house a new cinema and restaurants.

This piece is from the game of Ludus Latrunculorum, or ‘Game of Mercenaries’, a two-player military strategy game played throughout the Roman Empire – akin to draughts

Ludus Latrunculorum – the Game of Mercenaries – was a two player analogue to chess and draughts.

Few exact gameplay details have survived the passage of time but it is thought it was based on a Greek game.

It’s source was an earlier variant of a game called Petteia that involved two coloured pieces and the goal was to ‘take’ the other players pieces.

Roman writer Varro said: ‘At one time a white counter traps blacks, and at another a black traps whites.’

One theory of the rules suggest the game involves players ‘trapping’ one colour between two of their own.

The gaming artefact was found with a Roman comb, a possible spearhead and a pin or broach – the site for the cinema is believed to be near an ancient Roman barracks.

Chester was founded as a Roman fort in the 1st Century AD and is the only city in Britain to still boast a full circuit of Roman defensive walls.

Andrew Davison, Inspector of Ancient Monuments from Historic England, said the finds ‘will excite great interest’ in the Roman history of Britain.

‘Chester residents are unusually knowledgeable about the City’s heritage, including its archaeology,’ Davidson said of the location of the find.

‘They speak volumes about the quality of the archaeology we are dealing with at this significant site. I look forward to seeing more finds from the site as work continues.’

The various finds from this new development site, including the gaming piece and comb will be added to a collection of Roman relics at a local museum.

The gaming piece, which features a ring and dot motif on the front and sides was used in the Game of Mercenaries – an ancient analogue of chess or draughts.

It was a game of military tactics but a scarcity of written or archeological sources have made it difficult to reconstruct the exact rules – leaving many interpretations.

Roman author Varro – 116-27 BC – wrote about the game, describing part of play involving ‘white counter traps blacks, and at another a black traps whites’.

Chester was founded as a ‘castrum’ or Roman fort, during the reign of the Emperor Vespasian in AD 79 during a drive into the north of England.

It was named ‘Deva Victrix’ either after the goddess of the Dee or directly from the British name for the river that runs by the settlement.

The ‘victrix’ part of the name was taken from the title of the Legio XX Valeria Victrix – the English Twentieth Victorious Valeria Legion – which was based at Deva. 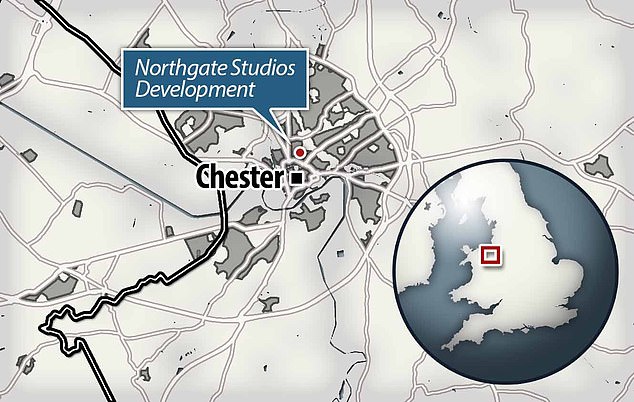 Archaeologists found the piece while assisting construction teams on the Chester Northgate development, which will house a new cinema and restaurants

In the early 3rd century the fortress was rebuilt by the legion, which remained at the fortress until the late 4th or early 5th century when it fell into disuse.

A civilian settlement grew around the fortess and it remained long after the Romans left ancient Britain – eventually becoming the present day city.

The finds were discovered in trenches being dug for new drains that will support parts of the new Chester Northgate development.

Chester Northgate is one of the most significant developments in Chester for decades and will feature a new market hall, cinema and restaurants that are due to open in two years. 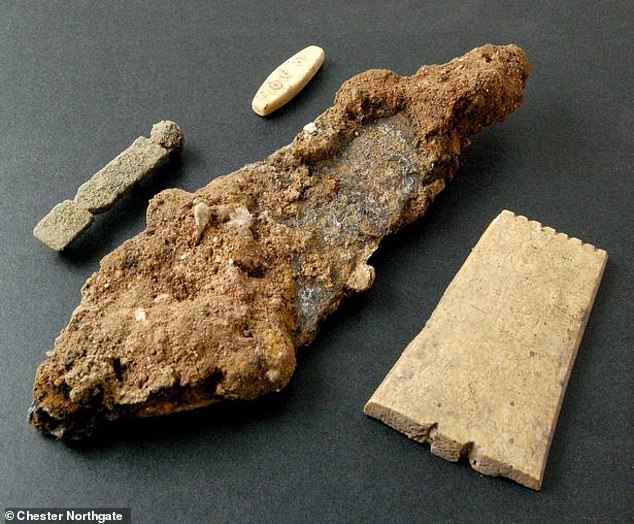 Several artefacts have been found at the site in addition to the gaming piece – including a comb, a possible spearhead and a pin or broach

Contractor VINCI Construction UK and archaeologists from private-firm Oxford Archaeology, have been carefully excavating the site for signs of Roman life.

‘It is pleasing to see such interesting artefacts unearthed as we begin the long-awaited construction at Northgate,’ Beacham added.

‘We will be treading very carefully to protect the sensitive archaeological remains on the site and will be adding anything we find to our impressive collection of Roman artefacts at the Grosvenor Museum.’

How England spent almost half a millennium under Roman rule

55BC – Julius Caesar crossed the channel with around 10,000 soldiers. They landed at a Pegwell Bay on the Isle of Thanet and were met by a force of Britons. Caesar was forced to withdraw.

54BC – Caesar crossed the channel again in his second attempt to conquer Britain. He came with with 27,000 infantry and cavalry and landed at Deal but were unopposed. They marched inland and after hard battles they defeated the Britons and key tribal leaders surrendered.

43AD – A Roman force of 40,000 led by Aulus Plautius landed in Kent and took the south east. The emperor Claudius appointed Plautius as Governor of Britain and returned to Rome. 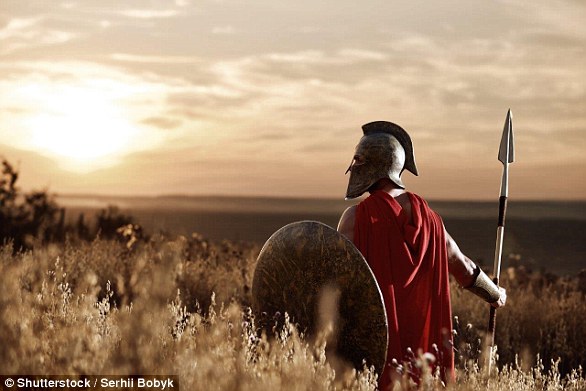 In 43AD, a Roman force of 40,000 led by Aulus Plautius landed in Kent and took the south east. The emperor Claudius then arrived in Colchester with reinforcements

50AD – Romans arrived in the southwest and made their mark in the form of a wooden fort on a hill near the river Exe.  A town was created at the site of the fort decades later and names Isca.

When Romans let and Saxons ruled, all ex-Roman towns were called a ‘ceaster’. this was called ‘Exe ceaster’ and a merger of this eventually gave rise to Exeter.