By Jennifer Newton for MailOnline and Press Association

The mayor of Rome has ushered in a permanent get-tough approach on boorish behaviour by tourists and Romans who exploit them.

Exasperated by visitors who frolic in Rome’s public fountains, vandalise its monuments and treat its landmarks as their own personal living rooms, the city famous for its artistic heritage and easy-going lifestyle has had enough.

The Italian capital’s first populist mayor, Virginia Raggi, presented a law banning bad behaviour including eating or drinking or climbing on monuments, walking around partially unclothed and wading through fountains.

The mayor of Rome has ushered in a permanent get-tough approach on boorish behaviour by tourists, including wading through fountains. Pictured is Trevi Fountain

Also banned is the popular practice of attaching ‘love padlocks’ to monuments and bridges and bouncing wheelie cases or pushchairs up and down the Spanish Steps.

According to the Telegraph, another rule decrees that tourists must not let their lips touch the metal spout of the city’s drinking fountains.

Locals have also been prohibited from dressing up as Roman centurions and aggressively demanding money from tourists who pose for selfies with them.

Disobeying these rules means local authorities can exile the badly behaved from the city’s historic centre for 48 hours. 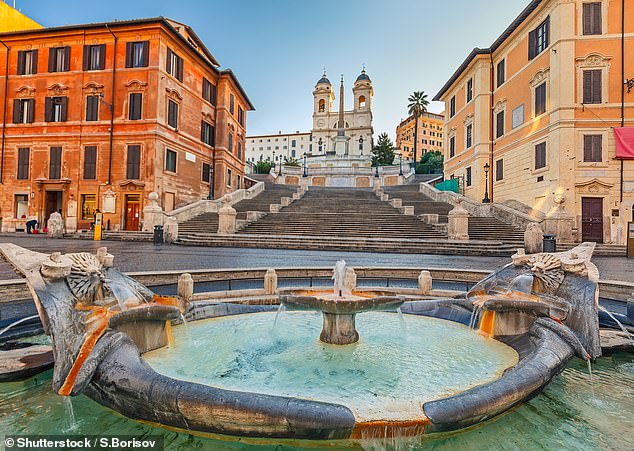 Ms Raggi, the highest profile mayor for the anti-establishment 5-Star Movement, boasted that for the first time since 1946, Rome had an ‘all-encompassing law’ ending decades of ‘temporary rules’.

‘We don’t want people to take a bath, or ruin or dirty monuments any more,’ she said from a terrace above her Capitoline Hill office overlooking the ancient Roman forum and Colosseum and their steady streams of tourists.

She also told reporters that she has started writing to foreign ambassadors whose citizens had been caught behaving badly.

Last week, police could be seen telling tourists near the Spanish Steps to put their shoes back on and stop drinking beer.

But the city faces an uphill battle.

On the grand staircase that leads to the Michelangelo-designed square outside City Hall, tourists nibbled on snacks, chugged down beer and fed seagulls bread as a traffic officer strolled by at the bottom of the stairs.

Elsewhere in Italy, tourists in Florence are warned they could face fines of up to £450 ($575/500 euros) for eating in the street.

The law bans snacking in four streets in the Italian city’s historic centre.

In Venice, stewards patrol the city looking for signs of uncouth behaviour such as sitting down on church steps and eating.

And in Milan last year, visitors were banned from taking pictures with selfie sticks.