Romford man who got stuck down a drain for THREE DAYS

A man fell down a drain and was trapped in a sewer for three days before he was rescued.

He is thought to have wandered through pipelines for up to 72 hours as he desperately tried to get out.

People working nearby eventually heard his pitiful cries for help coming from beneath the road.

According to witnesses, the first thing he said as he emerged into daylight was: ‘Does anyone have a fag?’

Police officers pull the man from the drain in Romford, east London. He claimed to have been trapped in the sewer system for three days

The unbelievable scene was captured by Sam Palmer, who heard the victim’s desperate cries for help from her workplace.

The man claimed he had fallen in up to six miles away on February 5 and could not get out of the manhole cover so began walking along the tunnel.

Officers were forced to pull a manhole cover off and haul the 48-year-old up out of the drain before he was rushed to hospital by paramedics.

Sam said the victim had told police he’d been stuck in the sewer for up to three days.

She said: ‘When he was pulled out, the first thing he did was ask for a spare cigarette.

He looked very dishevelled but at that moment, the crowd gave a sigh of relief as we knew he was okay. According to witnesses, the first thing he said as he emerged into daylight was: ‘Does anyone have a fag?’

‘Before that we had all been really worried. It was unbelievable, certainly something I will never experience again in my life.

‘Afterwards officers used the bathrooms at a nearby business to wash their hands following the mucky task in Romford, east London.

Sam was alerted to the unknown man’s plight after a neighbour heard his cries for help.

She added: ‘We could hear a faint cry for help and we began searching. But we were looking up and all around.

‘He just kept shouting “help” over and over again but he didn’t say that he was in a drain.’

‘Eventually we gave up and went back to work, but a while later, two police cars pulled up outside my workplace. 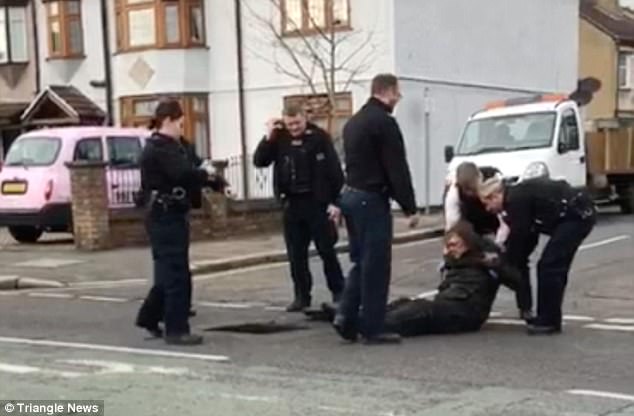 A man claimed he had fallen in up to six miles away on February 5 and could not get out of the manhole cover so began walking along the tunnel.

‘When they told me why they were here, I took them over to where we had heard him shouting.’

Lorraine Moss, from Romford, was on her way to work when she saw the man stuck in the drain.

‘Initially, I assumed that someone had been run over,’ she said. ‘However, as I got closer I could see a man standing in the drain.

‘Only the top half of his body was visible and he was covered in dirt. It took quite a few people to lift off the cover off and then there he was.’

Witness Stephanie Noe, 29, added: ‘It was so strange. The man was really dirty and I don’t think he was wearing any shoes. 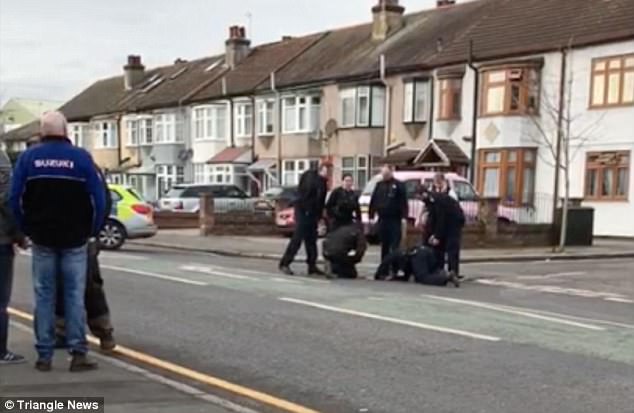 ‘He looked a bit bewildered and confused. He was saying that he’d been down there for a couple of days.

I don’t think he knew where he was.’

A spokesman from the London Ambulance Service said the man was treated for exposure to the cold and injuries to his feet after being pulled out last Thursday.

He said: ‘We were called by the Metropolitan Police at 12:58pm to Brentwood Road, Romford, to reports of a man found in a drain.

‘We sent an incident response officer and team leaders in an ambulance. We treated him at the scene for ankle injuries and for exposure to cold temperatures and water.’ 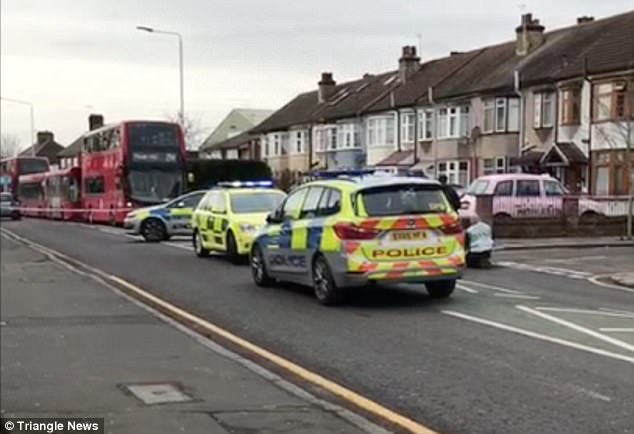 The unbelievable scene was captured by Sam Palmer, who heard the victim’s desperate cries for help from her workplace

But officials from Thames Water confirmed that following an investigation, they believe that the unknown man entered via an exit of the surface water system on a new housing estate, about a mile away.

A spokesman said an engineer checked but could not find any broken manholes that he could have fallen through, following a call from police.

The system carries rainwater from roads straight out to the River Rom so the explorer had not come into contact with toilet waste during his journey.

A spokesman for the Metropolitan Police said: ‘Officers attended and freed the 48-year-old man by removing the manhole cover.

‘He was taken to an east London hospital for treatment to injuries to his feet. His injuries are not life threatening.’

He added that the investigation had now been closed.