‘Like all great players, he is anxious for goals’: Cristiano Ronaldo is desperate to return to scoring ways after four-game slump, insists Maurizio Sarri

Juventus coach Maurizio Sarri believes that Cristiano Ronaldo will only be more motivated to reaffirm his greatness after his recent goal slump for the Italian champions.

The Portuguese returned from injury to start Juve’s 1-0 Champions League win over Atletico Madrid on Tuesday but the 34-year-old has hit a slump in form by his sky-high standards after failing to score in his last four games for the Turin giants.

Champions Juve, who host Sassuolo on Sunday as they look to maintain their one-point lead over Inter Milan at the top of Serie A, will have Ronaldo available – and Sarri would not be surprised to see a champion’s response from the Portuguese.

‘Players who are used to scoring are always anxious to score goals, they are used to finding the net regularly, so they are amazed when they don’t manage to for a few games,’ Sarri told reporters on Saturday.

‘It’s the same for Ronaldo, like all the great players. I think it’s a healthy attitude because it gives him motivation.

‘Clearly Ronaldo is not a player like all the others. It’s pointless to think that all the players are equal. 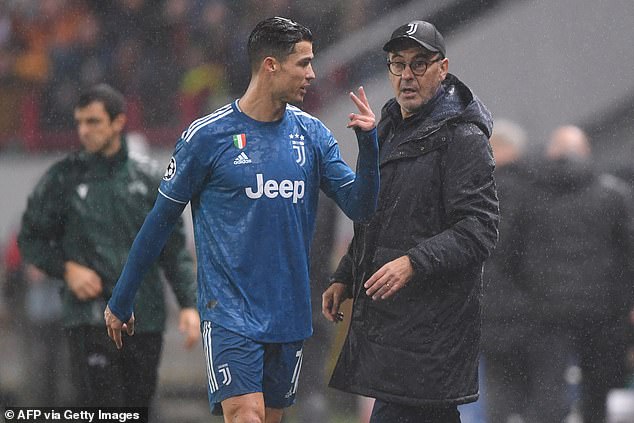 ‘If someone were to not accept that situation, it would be a problem for them and not for the team, but I see no such issues. Everyone is crystal clear.

‘Cristiano is an immense resource. He has stamina, but perhaps lacks a little in sharpness right now, which is only to be expected.

‘We have three forwards of enormous potential who are alternating, so we always expect a lot from them.’