Whether it’s the miniature bathroom toiletries, the in-room stationery or a robe and slippers – most guests are guilty of swiping items from hotels.

One swish hotel in New Orleans is all too aware of the thievery some of its guests commit – but has decided to get some PR out of it.

It is offering former thieving guests the chance to return what they’ve stolen over the years without fear of retribution. And the person who hands in the most ‘outrageous’ item will be rewarded with a $15,000 (£11,200) stay in its presidential suite.

The Roosevelt New Orleans, which is offering former thieving guests the chance to return what they’ve stolen without fear of retribution

The campaign, by The Roosevelt New Orleans, called the ‘Historic Giveback Contest’, is to celebrate its 125th anniversary.

When the contest ends in July, all of the returned items will be put on display in the hotel lobby in the hope they will tell the history of the building.

Already the hotel has received items such as a plate from the Blue Room restaurant, invoices from the 1940s, menus and postcards.

The person returning the most unusual item will win a seven-night stay in the Roosevelt’s presidential suite.

They will also get gourmet meals cooked by the hotel’s executive chef as well as luxurious spa treatments.

The hotel’s general manager, Tod Chambers, told Conde Nast Traveler: ‘We will accept any item from any time period in the building’s hotel history for our Historic Giveback Contest. We want to celebrate her entire past. And, we plan to display the items people send to us in window cases in the lobby. We will return items to their owners after a big ceremony in July, if they wish. 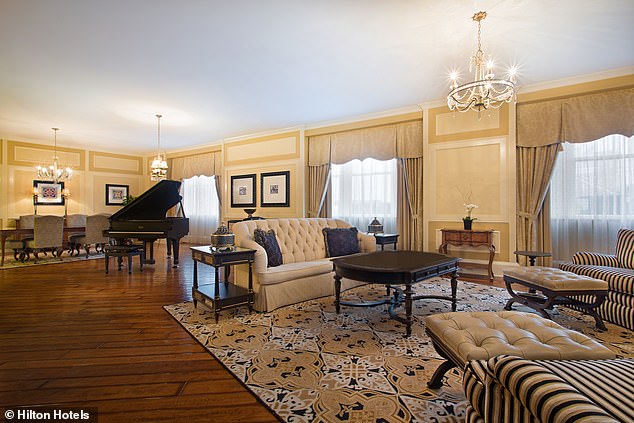 The person who returns the most outrageous or unusual item will be rewarded with a seven night stay at the hotel’s presidential suite (pictured), worth $15,000

‘In a way, knowing they have something that reminds them of our Roosevelt in their own homes? Well, that leaves us flattered.

‘This is letting us recapture a little history and have some fun doing it. We are getting a few items every week, and we expect that to rise as we roll toward July.’

Any unwanted items taken from the hotel can be returned in the mail or by dropping them off at the Roosevelt’s concierge desk. The winner will be announced in July.