While the world awaits the nuptials of Meghan and Harry it looks as though one bride was willing to give them a run for their money.

The guest list, which was seeping with socialites and celebrities alike, was treated to a ostentatious display of life size unicorns, a garden swing as well as real life Shetland ponies who acted as ‘flower girls’.

Guests took to Instagram using the hashtag #RohemiaRyan to share snaps of the couple’s big day, with the bride the subject of many.

Rosanna, who works as a Digital Strategist for Matthew Williamson, wore a dress of the British designer’s creation.

The floor-length ivory gown was made of a delicate lace and featured a cascading embroidery designs sweeping from the bride’s waist all the way to the end of her train.

While stunning the train would have certainly have presented problems when it came to dancing so Rosanna swiftly changed into a second dress for the evening do – not before posing atop of a life size unicorn sculpture.

For her second outfit the 32-year-old opted for a much shorter affair in the form of a green sequin mini dress, making her choreographer first dance a cinch. 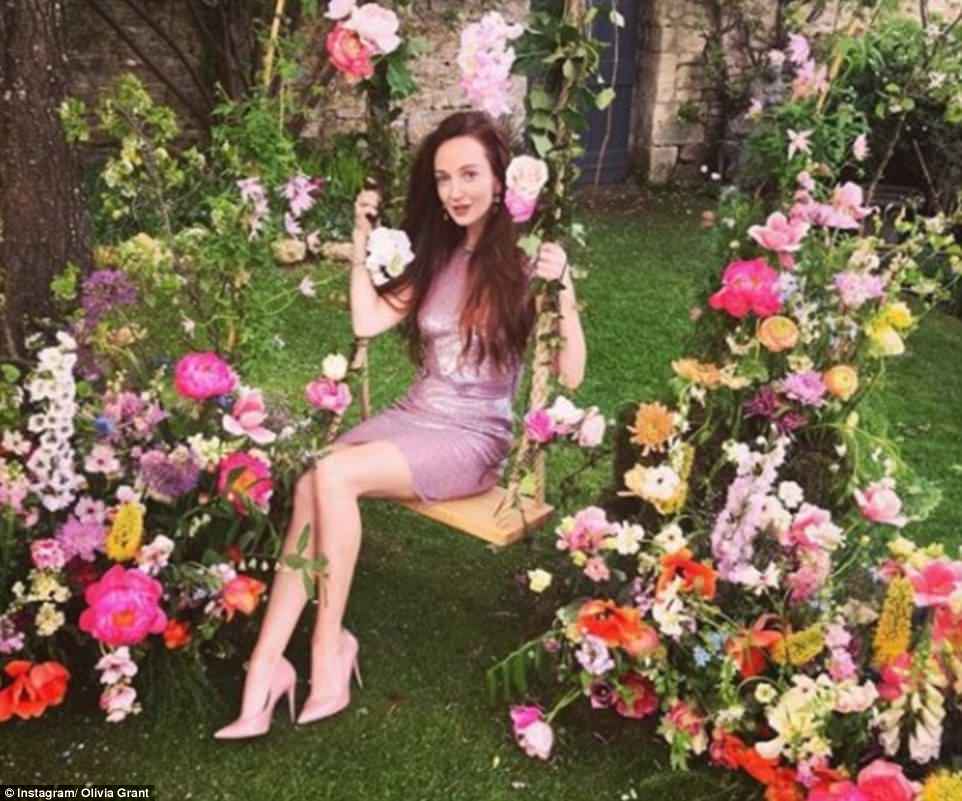 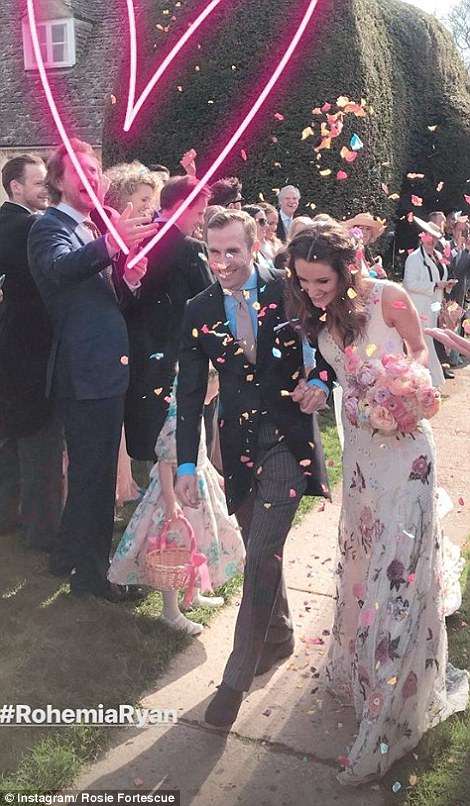 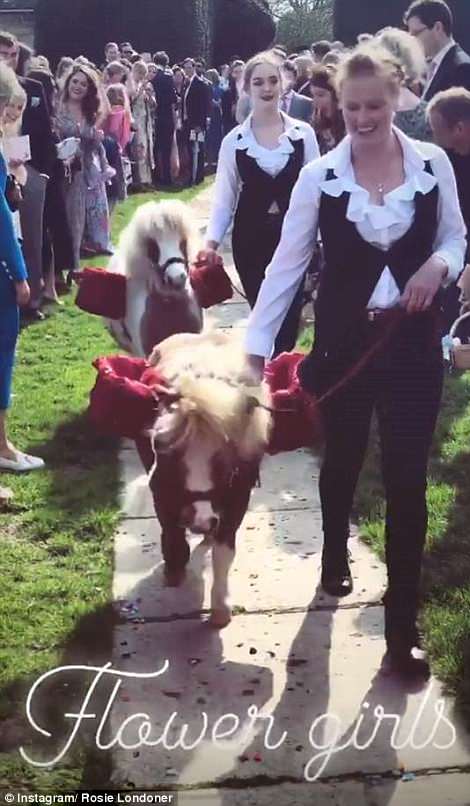 Rosanna wore a dress by Matthew Williamson and was followed down the aisle by two Shetland ponies who acted as ‘flower girls’, seen right

The wedding was held in the picturesque village of Painswick often referred to as ‘the Queen of the Cotswolds’ in the grounds of a sixteen-bedroom property The Painswick.

Guests received their inviations on illustrated cards designed by Ellie Vandoorne in what the bride describes as a ‘map of memories’.

Sharing a snap of the invites online she writes:  ‘Ellie and I met in the playground aged 8. She was the chic, cool Parisian (yes, she’s so Gallic she was born chic), I was never off a horse (until her teen house parties began).

‘She’s been there through the ponies, parties, heartbreak and happiness. It has been a joy to watch her create this story that will run through the wedding this weekend.’ 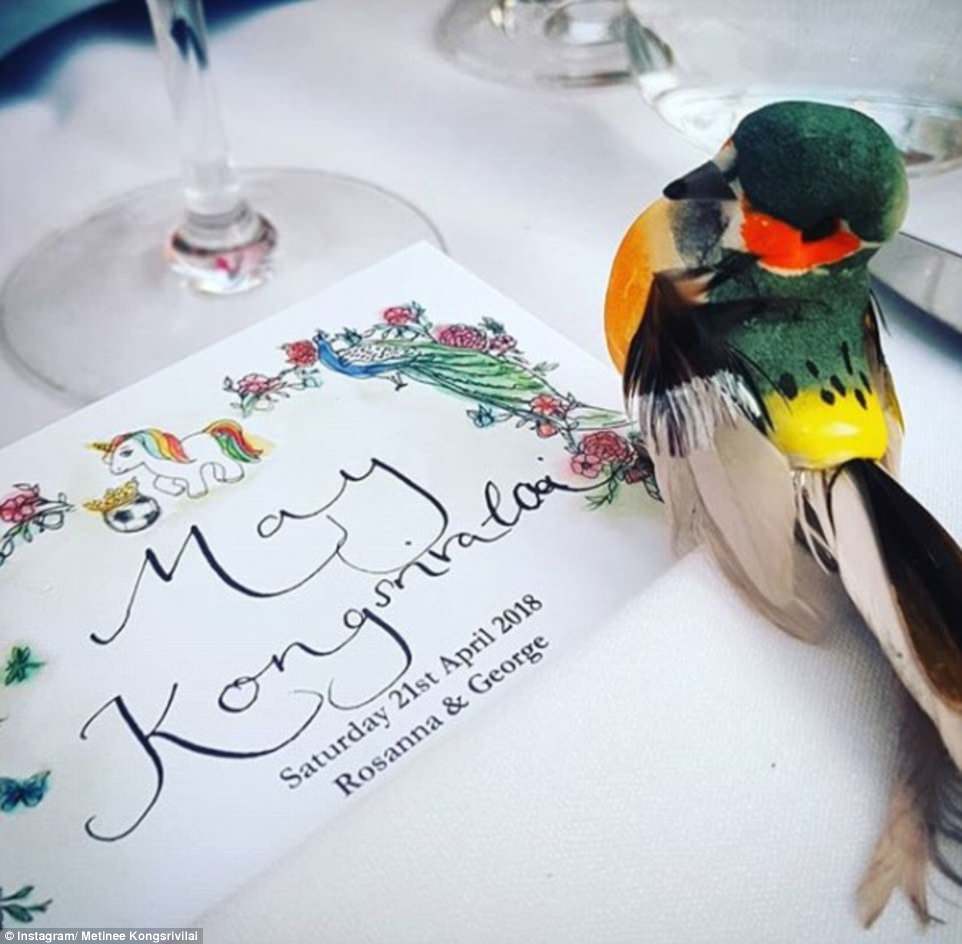 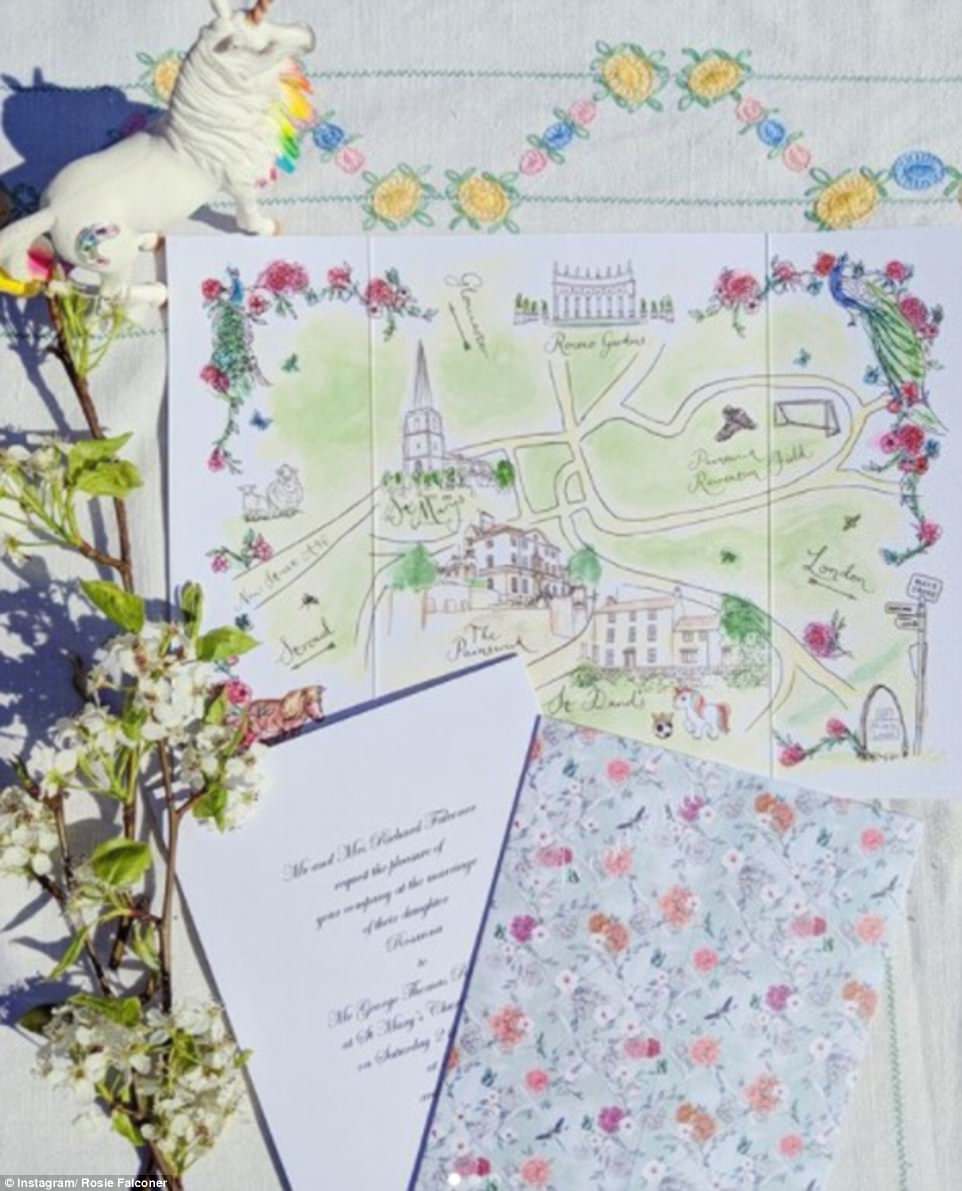 The guestlist itself read like the front row at fashion week featuring the likes of actress Olivia Grant, Rosie Fortescue and Matthew Williamson, who was seen sitting on top of the dining tables at the reception.

Following the ceremony which took place at Painswick Church sitting among the shadows of 99 Yew Trees, guests gathered in a glass greenhouse, reminiscent of that at Pippa Middleton’s wedding, which was decked out with fresh flowers and fairy lights.

Guest names were written on individual place cards, also the work of Ellie Vandoorne, accompanied by a small bird figurine. 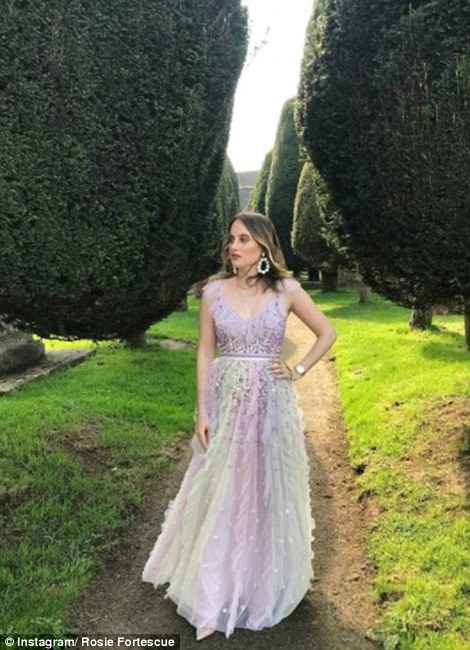 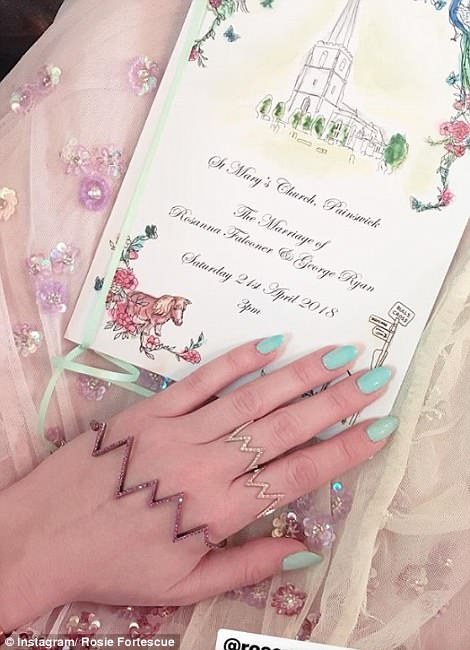 Made in Chelsea star Rosie Fortescue was also in attendance, dressed in a tulle gown by designer Needle and Thread 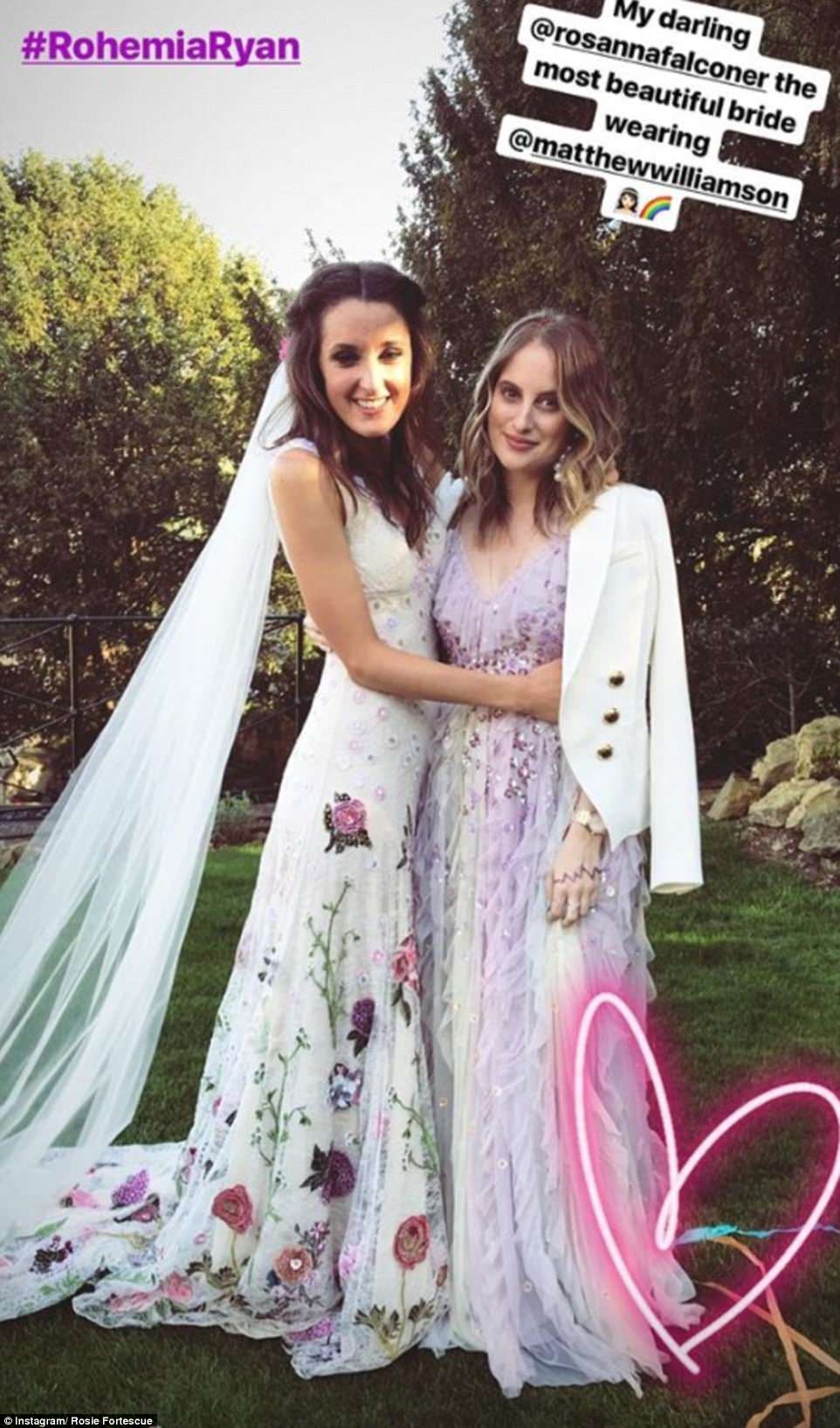 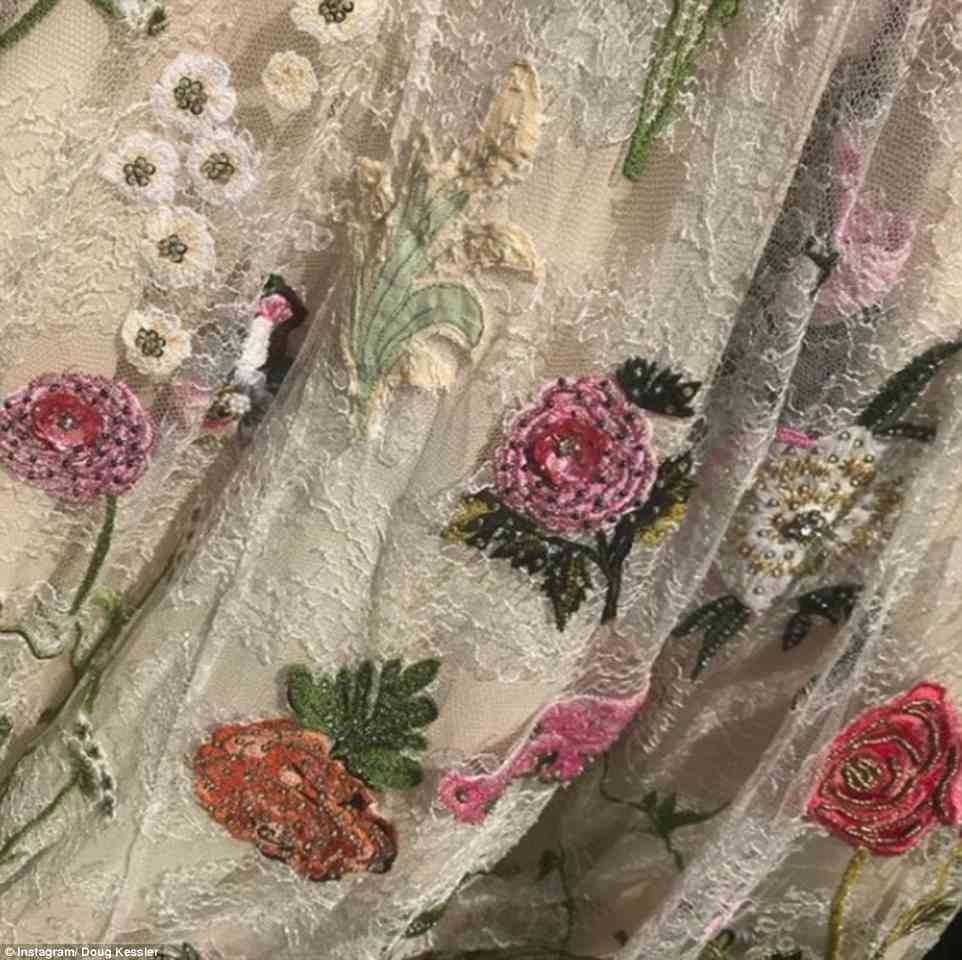 Dinner was the creation of the Painswick chef Jamie McCallum whose signature dishes include a Cotswold lamb and a beef Wellington and guests were served wine from a sommelier’s secret vineyards.

Following speeches, including one from the bride herself, who said her husband made her feel as though she ‘could achieve anything’, the couple had their first dance to ‘I want to dance with somebody’ by Whitney Houston.

For those who were still peckish there were popcorn stands and candy floss stalls on offer to push them through to midnight – which is when the venue calls curfew in respect of its neighbours.

It is thought that the bride and groom then retreated to the George’s suite, with ‘Romeo and Juliet balcony included’. 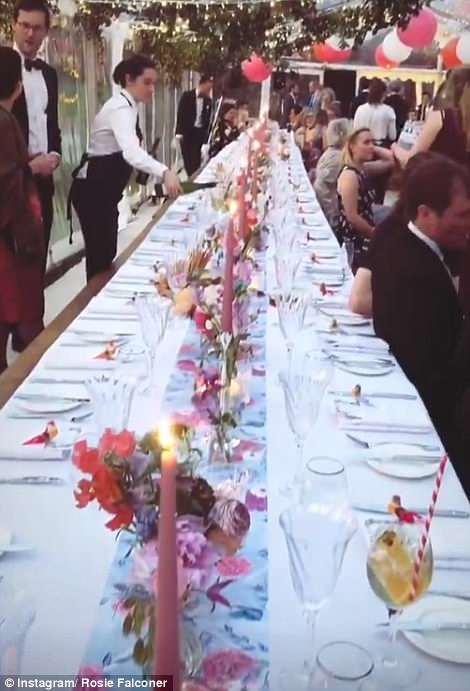 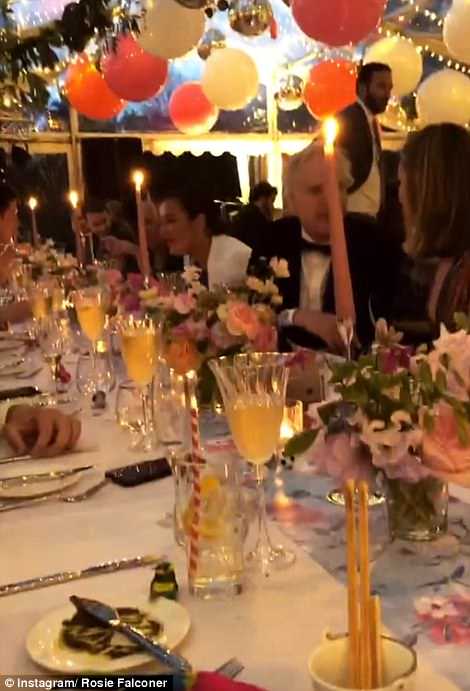 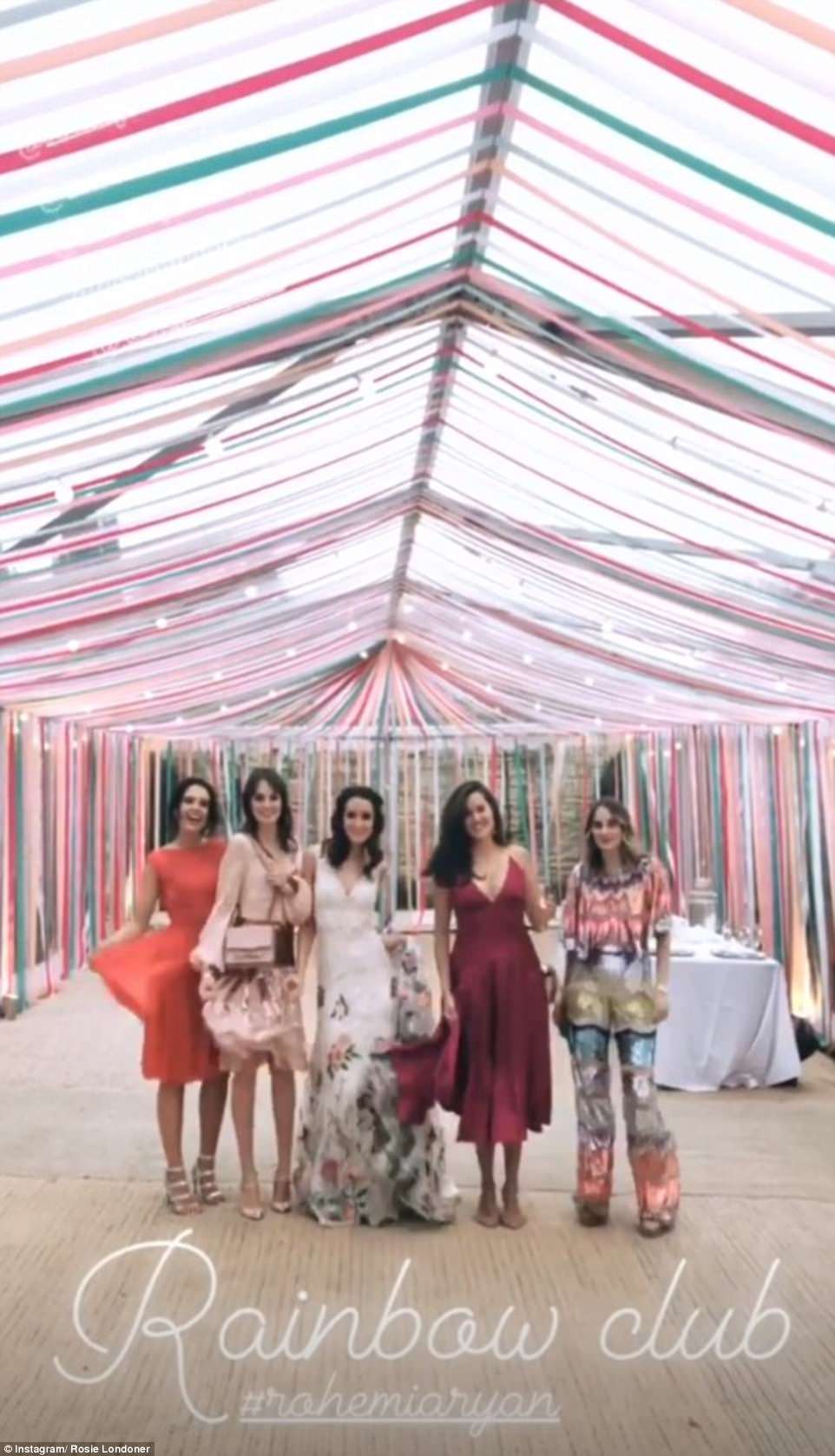 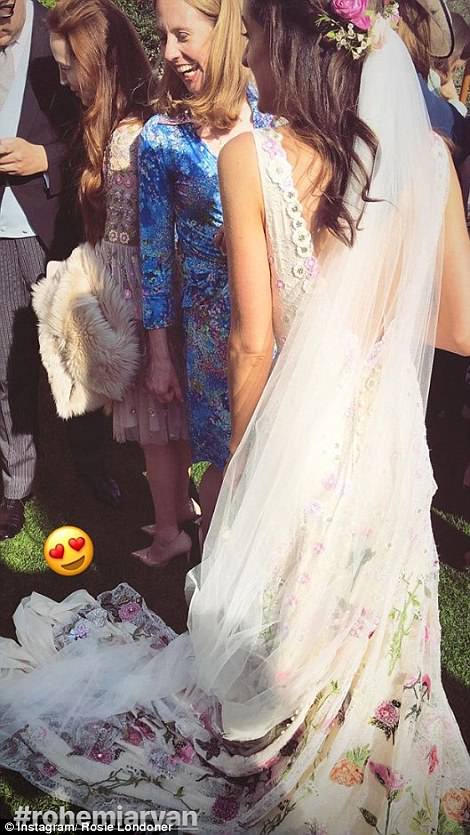 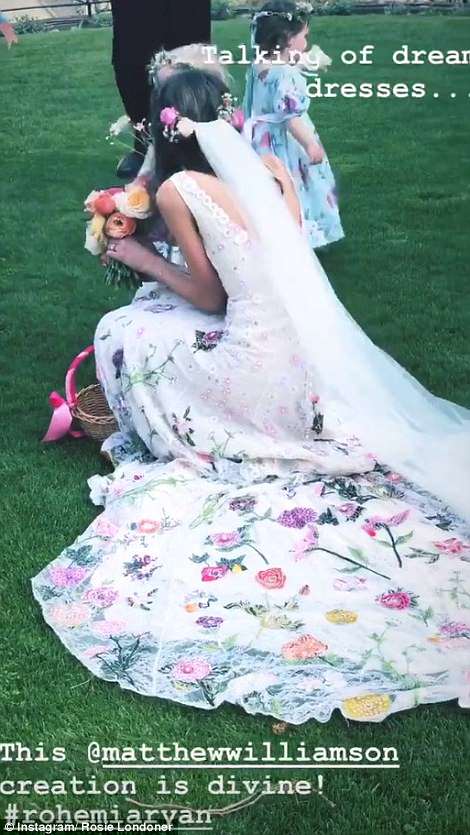 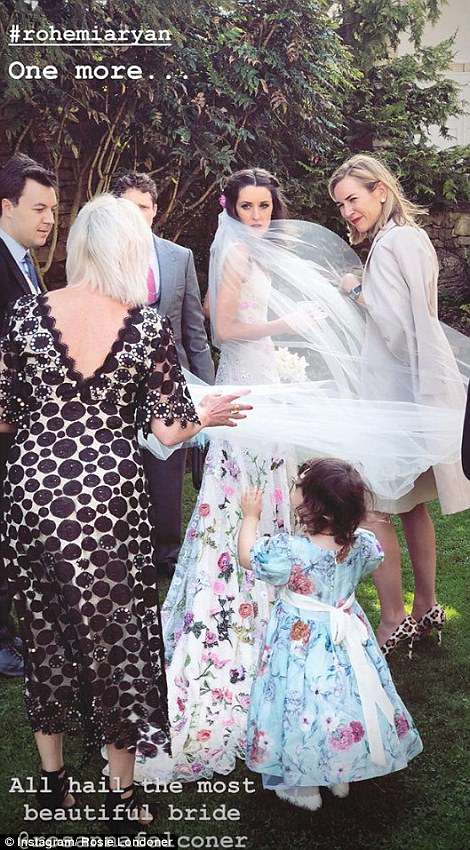 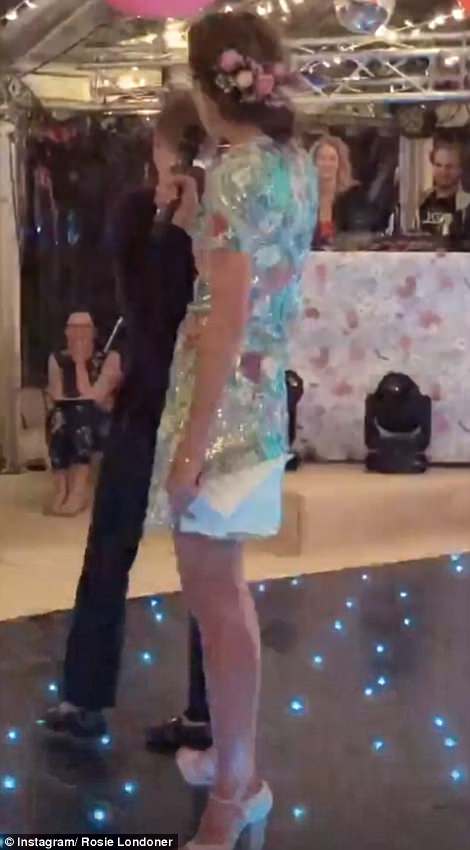 Guests took to Instagram using the hashtag #RohemiaRyan to share snaps of the couple’s big day, with the bride, who later changed into a second dress (right) the subject of many 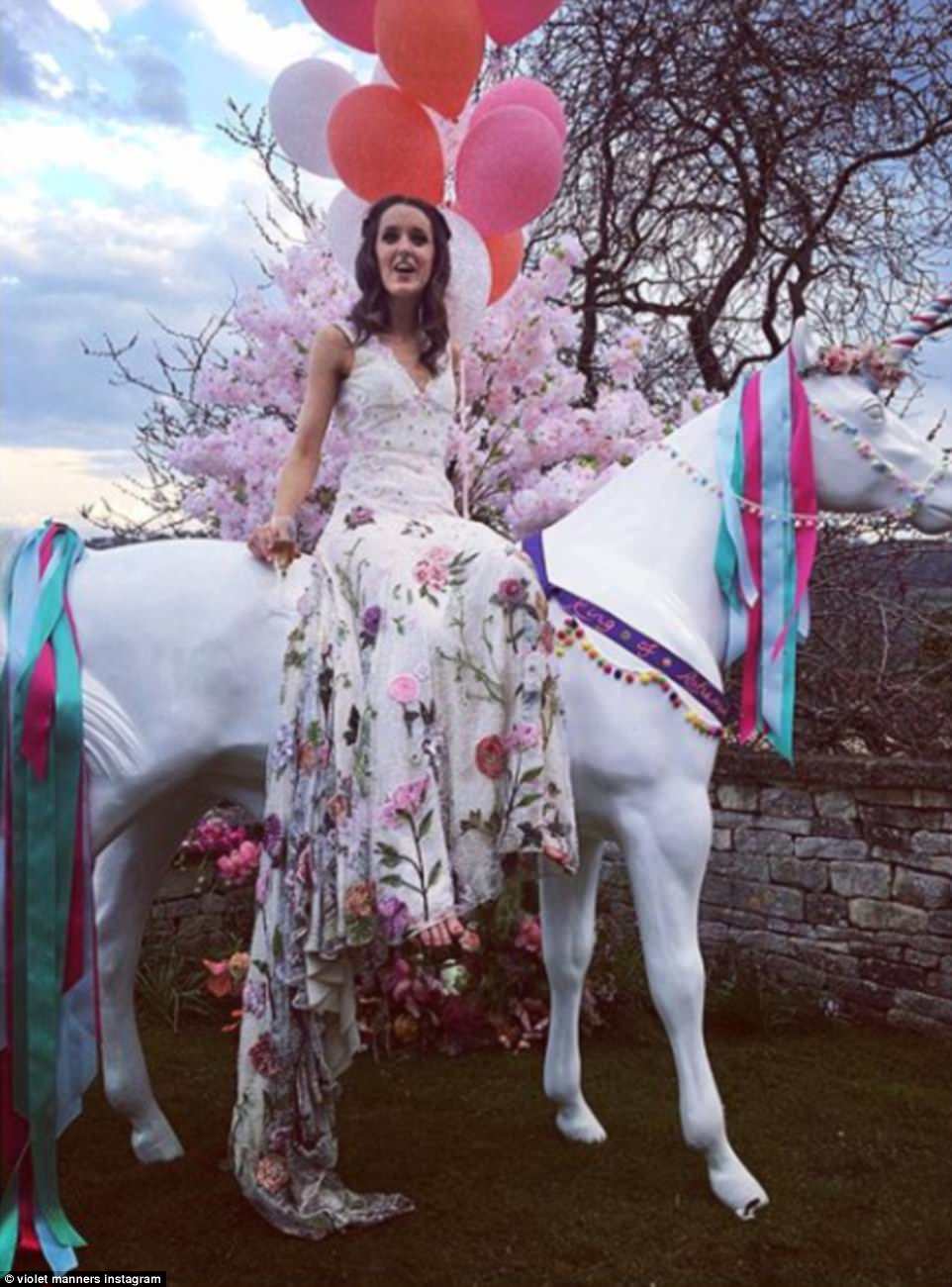 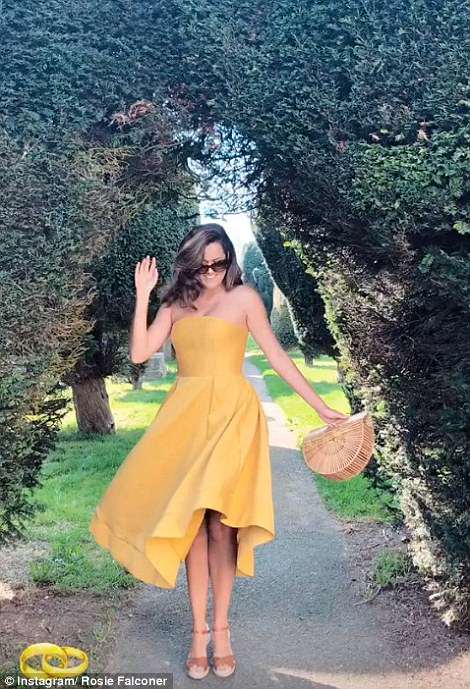 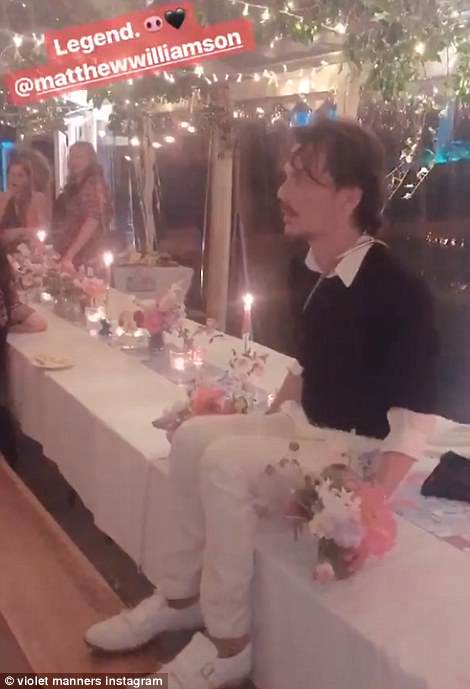 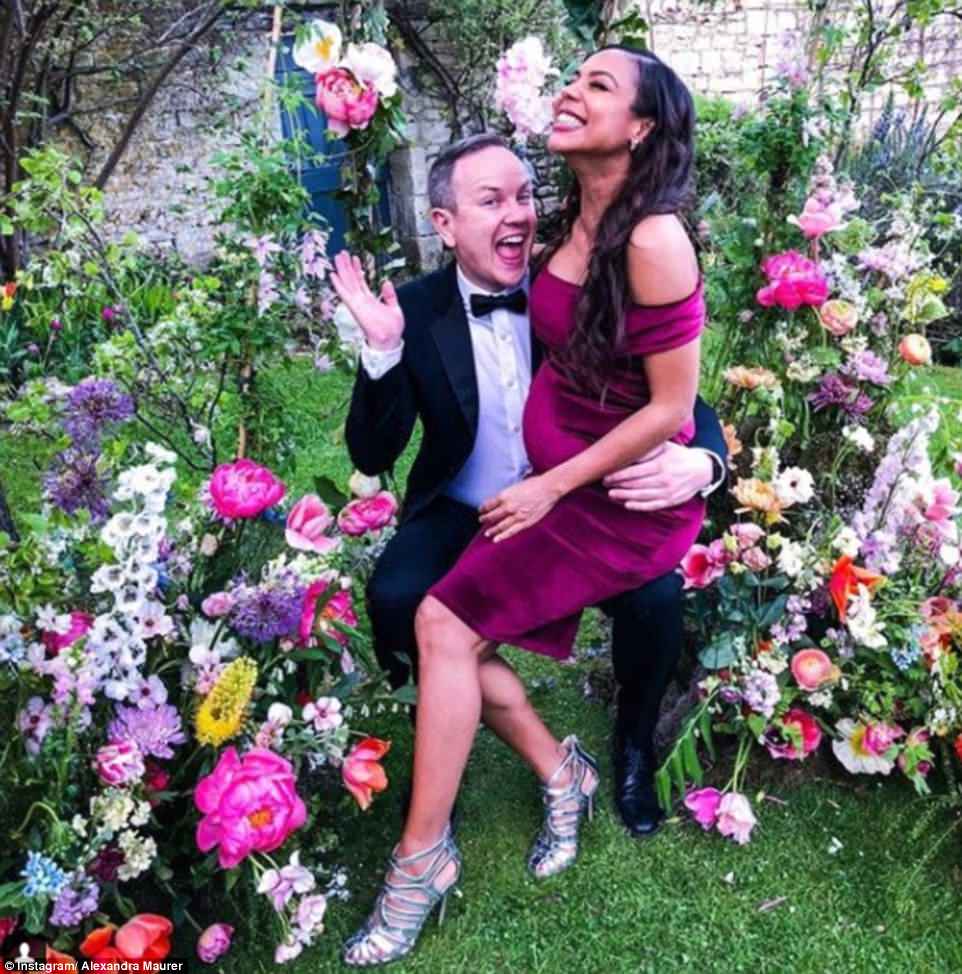