Rose McGowan claims Harvey Weinstein has tried to contact her

Rose McGowan has accused disgraced Harvey Weinstein of reaching out to her since she made allegations of rape against him.

The actress, 44, was in London on Wednesday when she told the BBC’s Victoria Derbyshire that she had ‘no idea’ how he obtained her number to send messages.

Last October, the former Charmed star accused Weinstein of assaulting her in a hotel suite in 1997 and is one of many women who have made allegations of sexual harassment or assault against the disgraced mogul.

Speaking out: Rose McGowan has said that Harvey Weinstein has tried to make contact with her since she accused him of rape. An allegation he denies.

Rose told the interviewer that she believed he had tried to make indirect contact with her through the media and through ominous messages in the last month.

‘Texts, things like that,’ she revealed. ‘I’ve got no idea how he got my number.’

She then accused him of using ‘Mossad agents’ to track her in the past, adding: ‘[So] getting my personal phone number wouldn’t be that hard.’

Rose – who was last seen at a fashion party in London on Wednesday night – explained how she received messages from, ‘Somebody that worked with him a month ago, on his behalf.’ 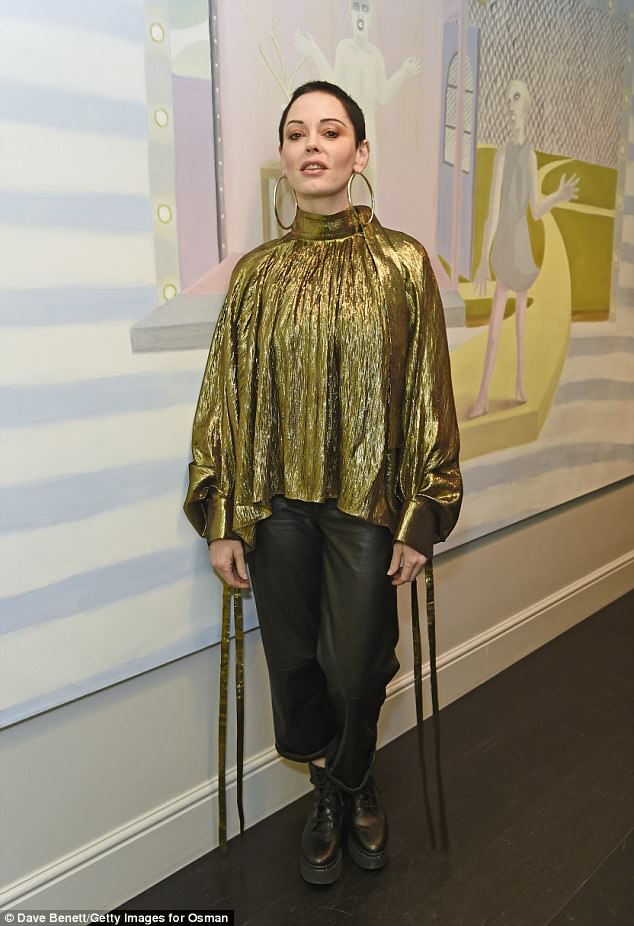 In London: The actress has been in London speaking about the ordeal on radio and TV chat shows 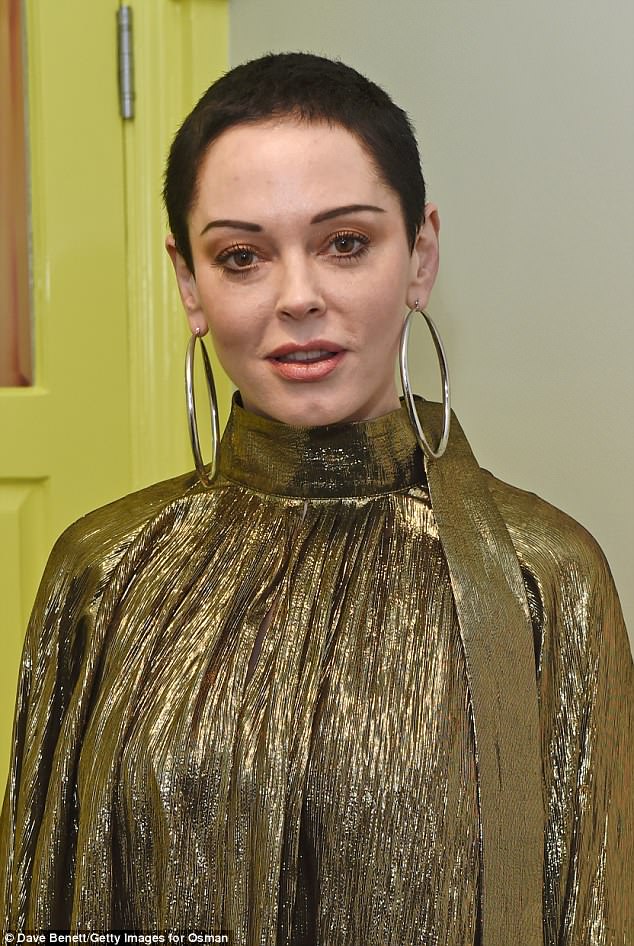 Reaching out: She was pictured on Wednesday night at the House Of Osman launch party

Later, she claimed that she believed the contact was directed at her on behalf of Weinstein.

‘It was essentially: “So and so wants you to…” – alluding to him wanting to get in touch. It could have been some random person but that would also be a long-shot.’ 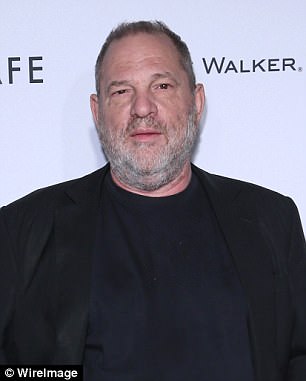 Indirect contact: Harvey Weinstein has been accused of paying off sexual harassment victims ‘for years’ to keep them quiet

Rose has been one of the most vocal of Weinstein’s alleged victims since a damning New York Times article last October, entitled: ‘Harvey Weinstein Paid Off Sexual Harassment Accusers for Decades’.

The Hollywood producer has denied all allegations of non-consensual sex.

‘I said it loud for years,’ Rose told Derbyshire. ‘Because what so many people don’t realise is that the shame is not ours, it’s the perpetrator’s shame. Not ours.’

Rose has been in London promoting the book Brave, in which she discusses her experiences and how women in the film industry have been treated.

In it she contrasts the religious communes she spent her childhood in, with what she describes as ‘the cult of Hollywood’.

While in London, the actress attended the House Of Osman launch party supported by Peroni Ambra on Wednesday evening.

Earlier that day, she had also appeared on the Jeremy Vine Show on BBC Radio 2, saying that she tried to expose Weinstein using the money he gave her to stay silent after he allegedly raped her.

Speaking about the alleged incident, McGowan denied that $100,000 she received afterwards was a settlement.

She said: ‘I requested money. I wanted to buy a billboard that said “his name” is a rapist. 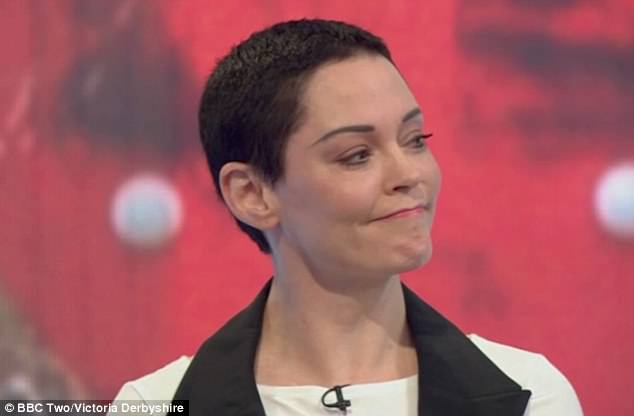 Reaching out: Rose has said that she believes Harvey is using the media and his people to reach out 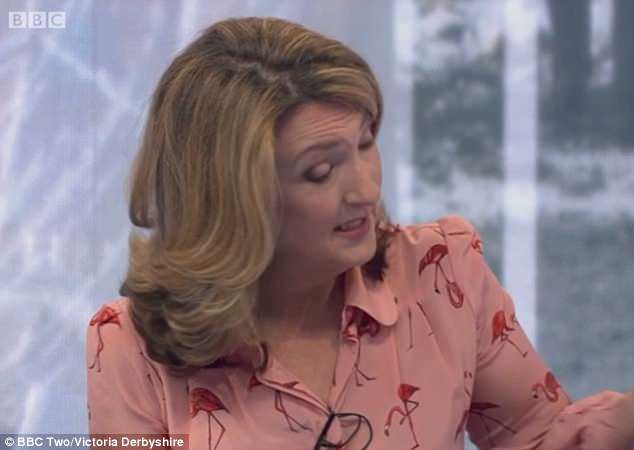 Directly? While she said it has been indirect so far, Rose told Victoria Derbyshire that she knew Harvey was sending a message 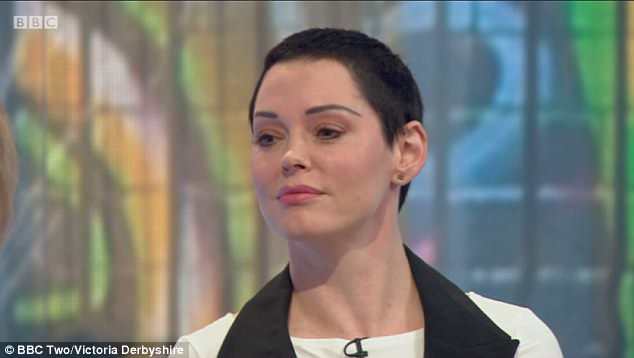 To what end? She said she couldn’t understand why he would need to be in touch when ‘the cat was out of the bag’

‘I thought if no-one was going to listen to me, then I could make them, on Sunset Boulevard, outside the Chateau Marmont hotel. I wanted that billboard right there.

‘I called them myself, Net Outdoors, the biggest billboard company at the time. They turned me down, surprisingly.

‘I donated some (of the money) to a rape crisis foundation.

‘I thought if I went to therapy, bless my young heart, for at least two months I could solve this. And I could get back to who I was.’

McGowan also spoke out against Weinstein’s staff who she says knew about his behaviour but did nothing to stop him.

Describing an encounter moments before he allegedly forced himself onto her, she said: ‘There were two assistants that opened the door when I was sent upstairs. I remember saying a very chipper ‘good morning’ and they wouldn’t look at me.

‘And I remember thinking “you’re not very friendly – that’s rude”. And afterwards you replay every moment, every reason why they didn’t look at you.’

The actress spoke about the ‘toxic masculinity’ that Hollywood films project and how supposedly strong female leads fall within that.

She explained: ‘Let’s look at strong female leads. Arguably in most of them – and I’ve played them – you’re strong.

‘You get to act like a man but we (directors) get to put you in a mini-skirt to wear while you do it. Here’s your gun’.’ 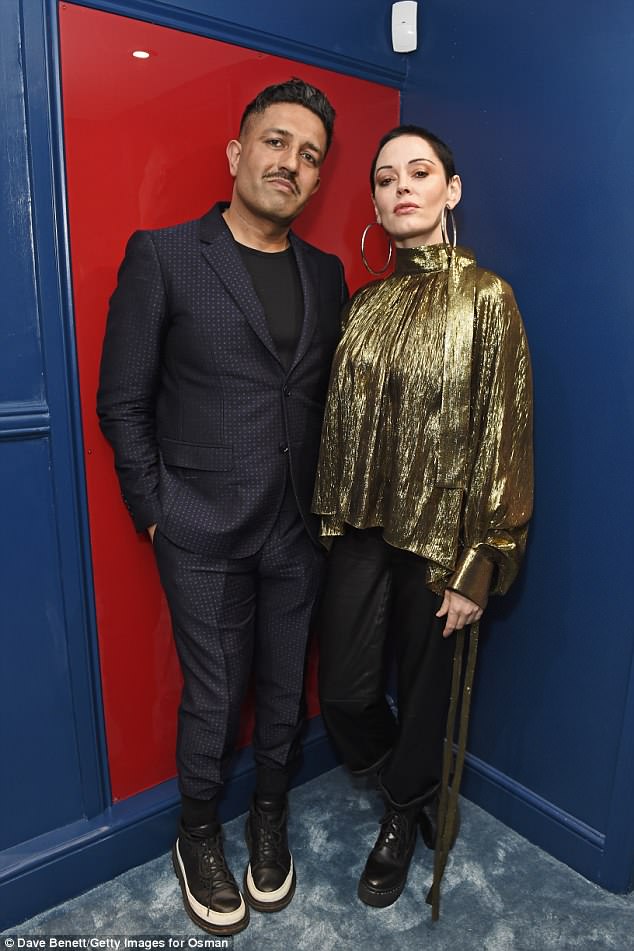 Show off support: The TV star was supporting designer Osman Yousefzada in the British capital while she does promotion for her book, Brave 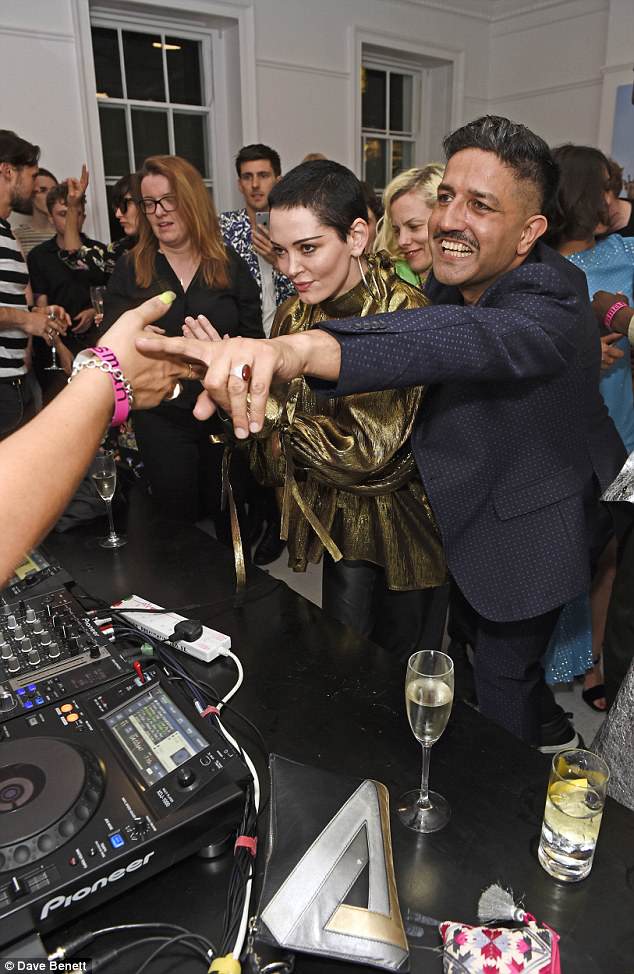 In the spirit: She has been one of Weinstein’s most vocal alleged victims 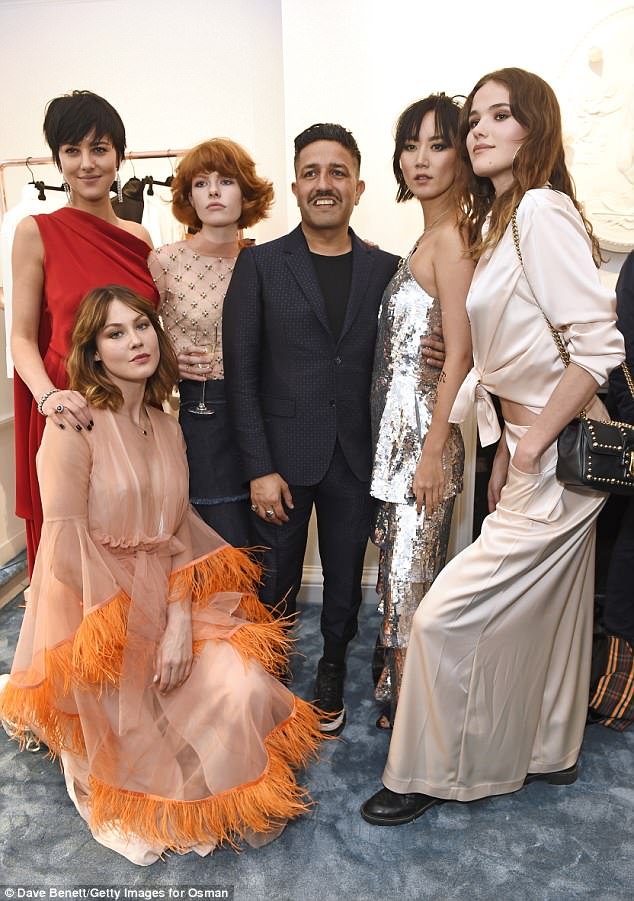