Rose McGowan has revealed a lifetime of abuse in her new memoir Brave.

Before McGowan even met Harvey Weinstein, she had been through hell and back by bouncing between her ‘cruel’ father and her mother, who pawned her off to an older man.

According to McGowan’s new book, obtained by the New York Times, the actress was raised in the polygamous Children of God cult.

Her family escaped the cult when its leadership started encouraging sex with children.

But even after that escape, she spent years bouncing between her father and her mother, who dated a vicious man who McGowan says was later charged with sexually abusing his own daughter.

McGowan and her mother later moved to Los Angeles, where she says, her mom met a pathological liar and moved away with him. 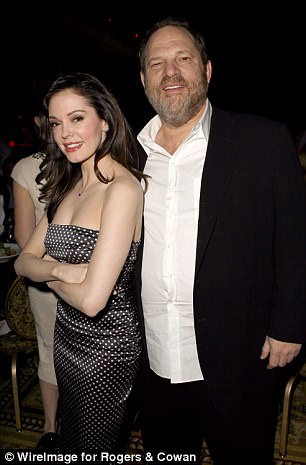 Before Rose McGowan even met Harvey Weinstein (right, with McGowan in 2007), she had been through hell and back by bouncing between her ‘cruel’ father and her mother, who pawned her off to an older man 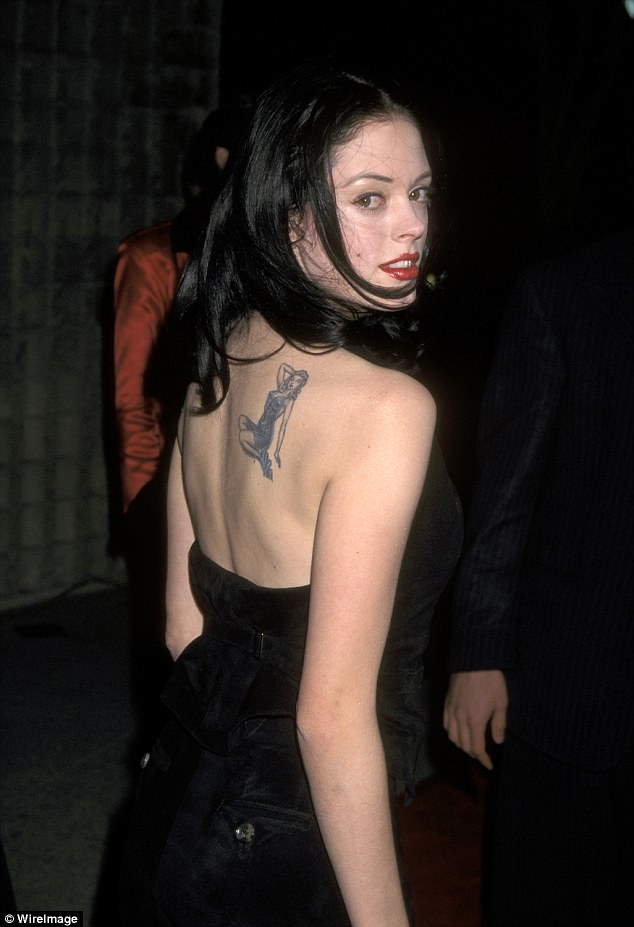 McGowan and her mother later moved to Los Angeles, where she says, her mom left her with a 20-year-old man after she met a pathological liar and moved away with him. McGowan is pictured during the premiere of Scream in Los Angeles

Before her mother moved, she asked McGowan’s boyfriend, who was 20 years old at the time, to take care of her daughter.

McGowan, who was 15 at the time, was forced to move in with her boyfriend, William, who soon turned violent and abusive.

According to her book, William once choked her and dragged her around by her collar, which caused her to lose two toenails.

She eventually escaped by stealing his new Ford Explorer.

‘I forged William’s signature on the car’s “pink slip” and traded it in for a spaceship-like sports car and never looked back,’ she wrote.

‘That was the end of William for me. I felt some guilt but my missing toenails reminded me that I shouldn’t feel too bad,’ she added.

Shortly after escaping her relationship with William, McGowan says she started dating a club owner named Brett Cantor, who was stabbed to death.

The murder is still unsolved, ‘but I have been trying for years to remedy that,’ McGowan writes.

In the new book, McGowan also talks about

McGowan also revealed what allegedly happened between her and Weinstein at the 1997 Sundance Film Festival.

She wrote that she had an appointment with Weinstein on the day of the incident but arrived to learn her breakfast meeting had been moved to his hotel suite. 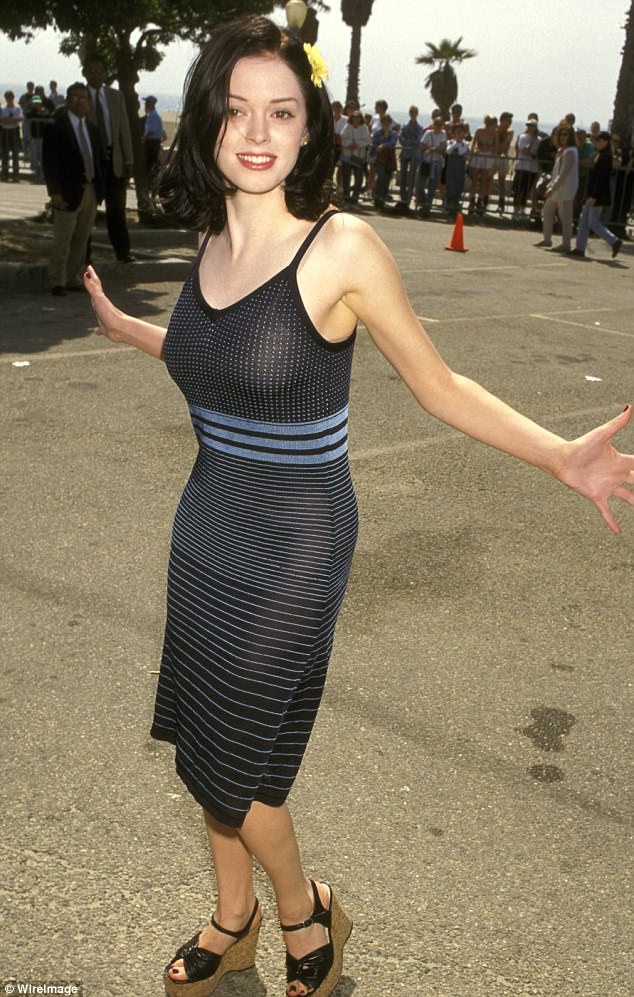 Speaking out: McGowan (pictured in 1997) details Harvey Weinstein’s alleged assault of her at the 1997 Sundance Film Festival in her new memoir Brave 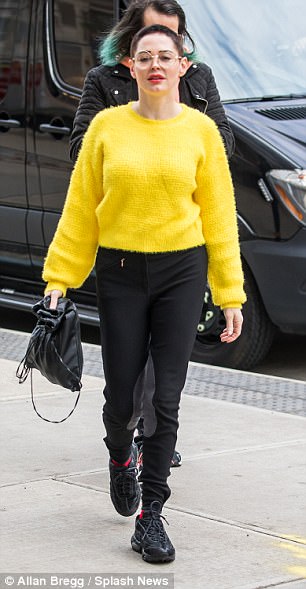 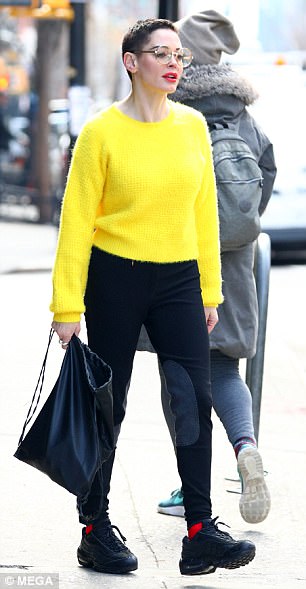 Mellow yellow: McGowan out strolling in new York City on Monday (above) 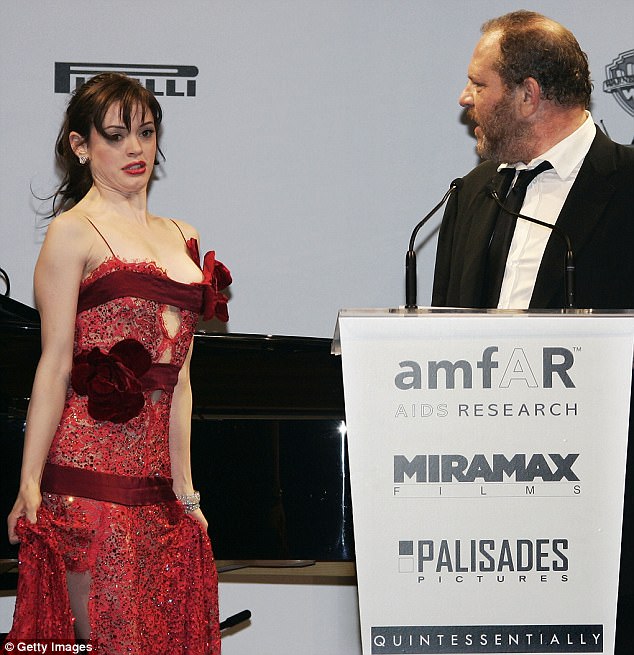 Scream: McGowan (above with Weinstein in 2005) writes that during a breakfast meeting with Weinstein she was asked to go to his suite where he performed forced oral sex on her and masturbated 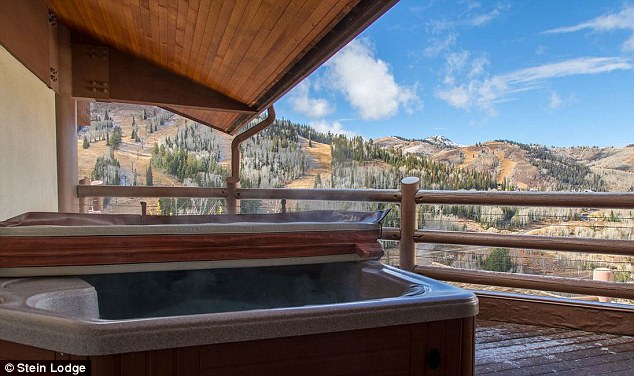 Scene: A Jacuzzi sits on the patio deck of a suite in the Stein Eriksen Lodge in Deer Valley, where Weinstein was staying in 1997 (above)

‘Mr. Weinstein has further confirmed that there were never any acts of retaliation against any women for refusing his advances.’

Soon after this alleged assault, McGowan received a $100,000 settlement from the disgraced mogul.

‘I freeze, like a statue,’ writes McGowan of the moments just before the alleged assault.

Weinstein proceeded to strip naked according to McGowan, and directed her towards the Jacuzzi while ripping off her clothes.

She details how the encounter ended that day at the Stein Eriksen Lodge in Deer Valley, writing: ‘He moans loudly; through my tears I see his semen floating on top of the bubble.’

McGowan’s alleged attack was remarkably similar to the one Asia Argento claims she endured at the Cannes Film Festival just a few months later in 1997, and like Argento, McGowan writes that she faked having an orgasm in hopes of quickly ending the encounter.

Then, in a story McGowan had previously hinted at on Twitter, she was taken to a photo call for her film Phantoms that was playing at the festival.

When he costar Ben Affleck learned about what happened, he allegedly said: ‘Goddamn it. I told him to stop doing that.’

Affleck had done his best to deny McGowan’s claims about their conversation that day by avoiding or ignoring the question. 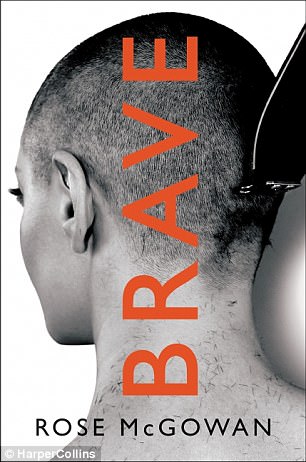 The topic last came up during an appearance on Today in December when Savannah Guthrie very bluntly asked if Affleck had been told by McGowan that she was raped by Weinstein.

Affleck responded by completely avoiding the question, saying: ‘I don’t want to get into other people’s individual stories. Those are their stories and they’re entitled to tell as much or as little of those. I believe Rose. I support her. I like and admire her tenacity and I wish her the best.’

Those feelings are not mutual however, with McGowan briefly getting the boot from Twitter back in October when she wrote: ‘Ben Affleck f*** off.’

It is unclear how much more she will reveal about Affdleck or other stars in her memoir, which hits bookshelves on Tuesday.

‘Very few sex symbols escape Hollywood with their minds intact, if they manage to stay alive at all ,’ McGowan writes at one point in the book.

She quickly took issue with the Times write-up of Brave.

‘For most adult readers, it won’t be much of a revelation that Hollywood trades in distortion and exploitation, writes Michelle Goldberg.

‘But I hope Brave finds its way into the hands of teenage girls who may still look to actresses as they try to figure out how they’re supposed to be in the world.’

McGowan responded by tweeting: ‘Yes, please, reduce my message to teenage girls. Thanks.’

Comments: The actress later hit out at the Times for its write-up which suggested the book would best be appreciated by teens, accusing them of ‘reducing’ her memoir 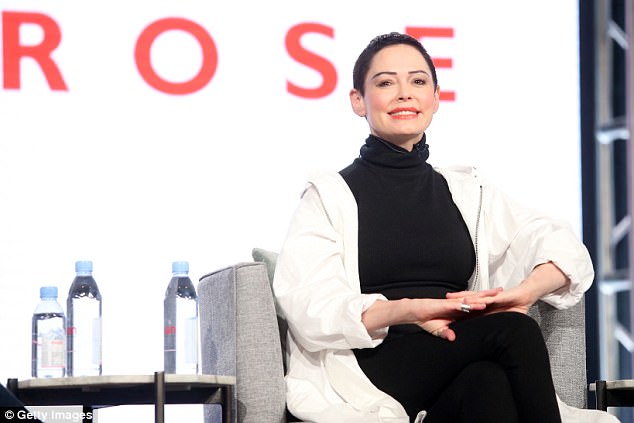 Alleged assaults: McGowan’s alleged attack was remarkably similar to the one Asia Argento claims she endured at the Cannes Film Festival just a few months later in 1997 (McGowan earlier this month at the TCAs)

McGowan found little help or support in the time after he alleged assault, with McGowan saying that her attorney told her no one would believe her in court while others ‘counseled me to see it as something that would help my career in the long run.’

It did not help in the long run, with the actress’ career reaching its height in 1999 with the cult classic Jawbreaker before she was relegated to television, where she starred in the highly profitable but ‘deadening’ drama series Charmed.

Her situation was further complicated by Weinstein’s attacks on her to executives at other studios according to McGowan.

‘It seemed like every creep in Hollywood knew about my most vulnerable and violated moment,’ Rose writes in the memoir.

‘And I was the one who was punished for it.’ Her film career was derailed.’

It was the Times that reported last year about McGowan receipting a $100,000 settlement in the wake of the incident.

That settlement did not require her to sign an NDA, but McGowan very publicly threw caution to the wind in November by alleging on Twitter that Weinstein was her rapist.

McGowan also took aim at Roy Price around that time, days before he was ousted as head of Amazon Studio following allegations of sexual harassment that became public two years after they were first reported to executives.

The actress wrote on Twitter that Price had told her that her rape claims against Weinstein were not credible.

Price is friends with Weinstein and the two men also worked together on projects when they had jobs.

He responded to her comment by killing the project she was developing for the streaming giant claimed McGowan.

‘I told the head of your studio that HW raped me. Over & over I said it. He said it hadn’t been proven. I said I was the proof,’ said McGowan in a tweet directed at company founder Jeff Bezos.

‘I had already sold a script I wrote to your studio, it was in development. When I heard a Weinstein bailout was in the works.’

She then added: ‘I forcefully begged studio head to do the right thing. I was ignored. Deal was done. Amazon won a dirty Oscar.’ 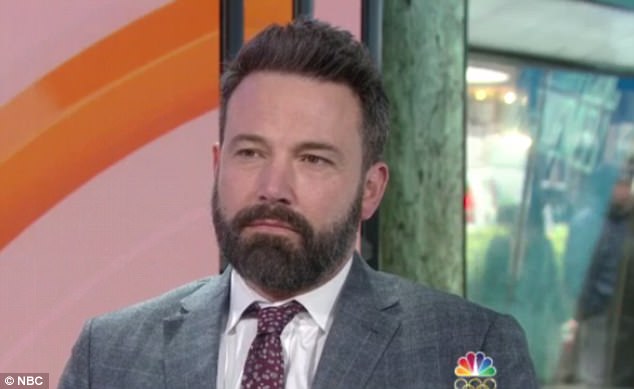 Bumbling Benny: McGowan also reiterates her claim that she told Ben Affleck about the attack immediately after and he said: ‘Goddamn it. I told him to stop doing that’ (Affleck avoiding the question on Today in December)

McGowan is now preparing for the premiere of her new E! reality show on Tuesday, Citizen Rose.

The actress was promoting the project earlier this month when she reveled that she might have to unload her $2million home in the Hollywood Hills to pay for the legal help she has been receiving ever since she began publicly speaking out against Harvey Weinstein late last year.

‘I am having to sell my house right now to pay legal bills fighting off the monster,’ said McGowan, who did not once mention Weinstein’s name during the panel.

Local property records reveal that the home is not currently on the open market and is still owned by McGowan at this time.

She also asked that the reporters and critics in attendance not speak Weinstein’s name either, with a pre-taped segment at the top of the presentation informing those present of McGowan’s wish.

‘There’s a person behind the name so please be respectful and understand this is a very hard and dramatic thing,’ said McGowan in the video.

‘I’d appreciate no mentions of the name that we all know, or anything rude or combative.’

She then opened the panel by quoting Monsters Inc, declaring: ‘I scare because I care.’

McGowan was quick to address her public persona in the panel, admitting: ‘I know I make people uncomfortable. I know that.’

She then said however that many have been fed lies and a smear campaign about her for the past 20 years.

The actress certainly appeared to make her new bosses a bit uncomfortable when she did not shy away from a question about pay disparity between male and female employees at E! in the wake of Catt Sadler’s exit from the network.

‘Let me hang out here for a while. Maybe things will change,’ said McGowan, who also noted that she wanted to do the show with E! because they are a more ‘egalitarian’ network than HBO or Netflix.

McGowan and the producers also spoke about this current ‘time of reckoning,’ and revealed that they began shooting in September just before the Weinstein expose broke open the discussion about sexual assault and harassment.

There is also footage from the past three years that McGowan recorded herself before she had a television deal.

Weinstein will not be seen in the show meanwhile, with a black bar covering his face.