Roseanne Barr returned to Twitter on Tuesday just a few hours after announcing she was quitting the social media platform, and quickly took aim at two of her costars.

Michael Fishman, who started working with Barr when he was just six, was the first to feel the wrath of the show’s creator after he released a statement criticizing her racist tweet about Valerie Jarrett.

Barr was none too happy with that statement however and fired back on Twitter, writing: ‘I created the platform for that inclusivity and you know it. ME. You throw me under the bus. nice!’

Reps for ABC did not respond to multiple requests for comment.

Family Drama: Roseanne Barr returned to Twitter Tuesday evening hours after she announced that she was quitting the social media platform 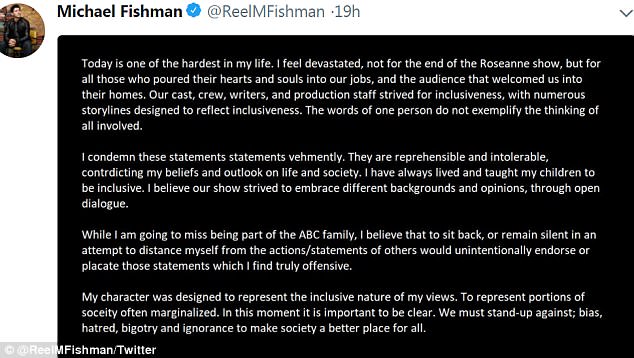 Mother and son: She first went after Michael Fishman, who has a black daughter on the show and said Barr’s racist tweet about Valerie Jarrett was ‘reprehensible and intolerable’

‘I am disappointed in her actions to say the least,’ wrote Gilbert, prompting Barr to say: ‘Wow! unreal’

Fishman was not the only original cast member to take a stand, with Sara Gilbert also releasing a statement that very much echoed the one released shortly after by ABC.

Gilbert was then forgiven soon after by Roseanne, who tweeted: ‘no, I understand her position and why she said what she said. i forgive her. It just shocked me a bit, but I indeed f***ed up.’

There was no response to any of the other cast members who tweeted, including Emma Kenney, who said she was preparing to quit the show when she learned of the cancellation.

Barr did not go after Kenney, who is just 18 and back at work on the set of Shameless, or Wanda Sykes.

It was Sykes whose tweet may have been the final nail in Barr’s coffin over ta ABC, when the consulting producer wrote Tuesday morning: ‘I will not be returning to @RoseanneOnABC

During this all, Barr also retweeted a number of offensive posts in hopes of showing that it was her politics that ultimately led to her termination.

Barr has made no secret of her affinity for President Trump, and he even called her the day after the show premiered to record ratings back in March.