It seems Rosie O’Donnell is not quite finished using her Twitter fingers to go off on the conservative right during the holiday season.

The 55-year-old actress responded to a video House Speaker Paul Ryan posted on Saturday to celebrate Christmas, telling him to ‘go straight to hell.’

‘paul ryan – don’t talk about Jesus after what u just did to our nation – u will go straight to hell u screwed up fake altar boy #JUDASmuch,’ she said on Twitter, Monday. 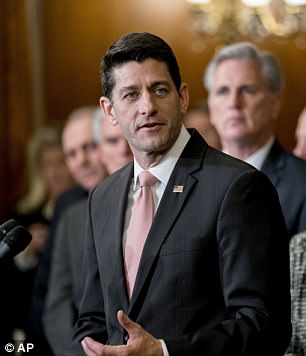 Rosie O’Donnell responded to a video House Speaker Paul Ryan posted on Saturday to celebrate Christmas, telling him to ‘go straight to hell’ 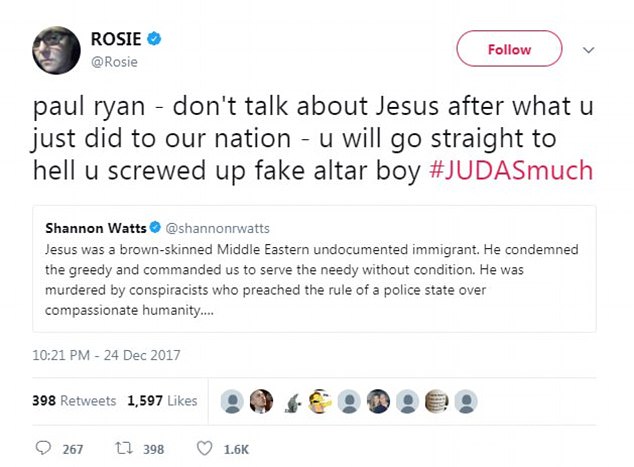 ‘paul ryan – don’t talk about Jesus after what u just did to our nation – u will go straight to hell u screwed up fake altar boy #JUDASmuch,’ she said, Monday

Ryan posted a video of himself giving a speech in Washington DC in hopes of showing his pride in the holiday.

‘At the end of each year, no matter how short—or long—it may feel, there is always Christmas,’ he said on Saturday.

‘Waiting for us is that sense of wonder the shepherds felt when the angels appeared in the night sky to herald the birth of a Savior.’

O’Donnell’s animosity toward Ryan is not new: she tweeted ‘f**k u’ to the speaker back in January.

She famously has feuded with President Donald Trump since before he even became president.

Just last week, Rosie O’Donnell had tried to bribe Republican Senators Jeff Flake and Susan Collins for $2million so that they would vote against the tax reform bill.

And on late Sunday night, Conservative media personality Ben Shapiro shared that Twitter removed tweets that the actress had directed at him, telling him to ‘Suck my d**k Ben.’ 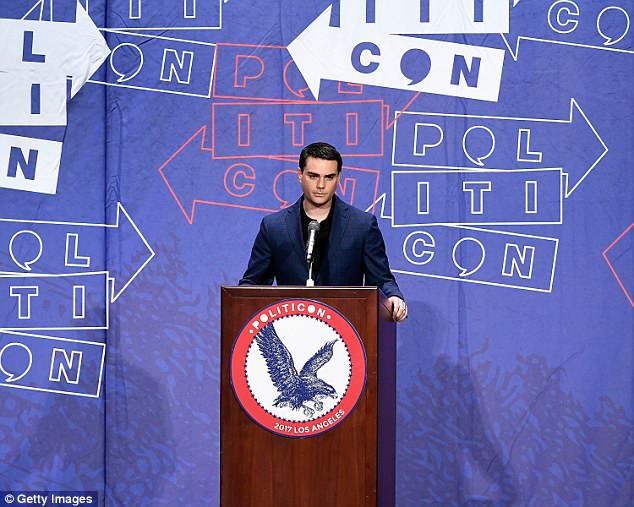 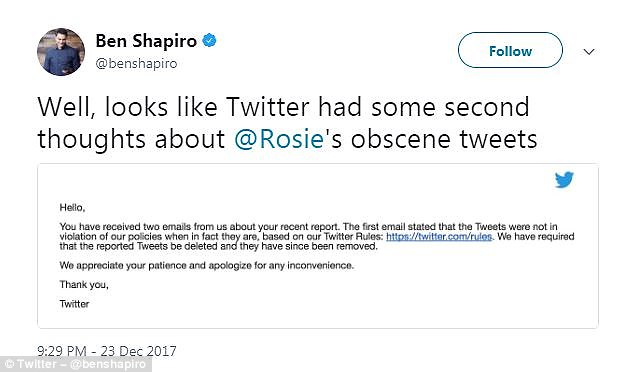 Shapiro posted an email message he received from Twitter saying that the company re-examined the issue and deemed O’Donnell’s tweets as abusive.

O’Donnell continued her onslaught, claiming he looked liked a ‘high school junior’ when he claimed her comments were sexual harassment. 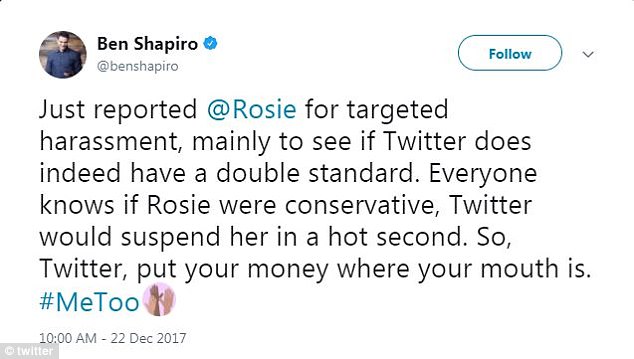 The conservative columnist and commentator reported the former The View host after she directed a vulgar comment at him. O’Donnell told editor in chief of the Daily Wire Shapiro to ‘suck my d*** ben’ in a tweet that she later deleted

Earlier on Sunday, Shapiro slammed Twitter for saying O’Donnell was not abusive when she ‘harassed’ him on the social media platform.

Shapiro wrote in a tweet on Friday: ‘Just reported @Rosie for targeted harassment, mainly to see if Twitter does indeed have a double standard. Everyone knows if Rosie were conservative, Twitter would suspend her in a hot second. So, Twitter, put your money where your mouth is.’ 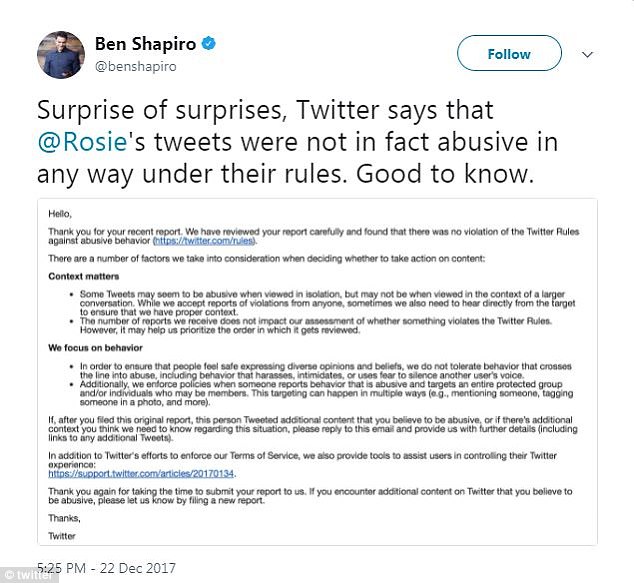 Just a few hours later, Shapiro revealed to his followers that he had already got a response from Twitter, clearing the talk show host

He then wrote: ‘It’s an attempt to clarify Twitter’s standards. I don’t actually want them to ban or suspend Rosie. I want them to stop applying their own rules inconsistently.’

Alongside a screenshot of the decision from Twitter, a few hours later he wrote: ‘Surprise of surprises. Twitter says that @Rosie’s tweets were not in fact abusive in any way under their rules. Good to know.’

The feud between the pair started when Shapiro slammed the talk show host for saying she would give Senators Susan Collins and Jeff Flake $2million for voting against the Republican’s tax reform.