‘I’m gutted I missed, but these things happen’: Ross Barkley insists he was right to take penalty for Chelsea in Champions League loss to Valencia

Ross Barkley launched a defence of his decision to take a late penalty for Chelsea in their Champions League group stage defeat by Valencia.

The midfielder stepped up, but missed the kick as the hosts secured a narrow victory through Rodrigo’s second-half strike.

Barkley insisted that he was assigned penalty duties and would happily step up again if required..

‘We’ve got a lot of good penalty-takers in the squad,’ said Barkley. ‘On a sheet in the changing room, it says I’m on penalties when I’m on the pitch, otherwise it’s Jorginho.’

‘All players feel confident of taking penalties, but we can all miss them. It’s more “good luck with the penalty” type of thing, encouraging me. They would have been willing to take it as well, but I felt confident.

‘I don’t miss them in training and in pre-season I was scoring penalties. I’ve missed penalties before, when I was at Everton. I’m gutted I missed, but these things happen.’ 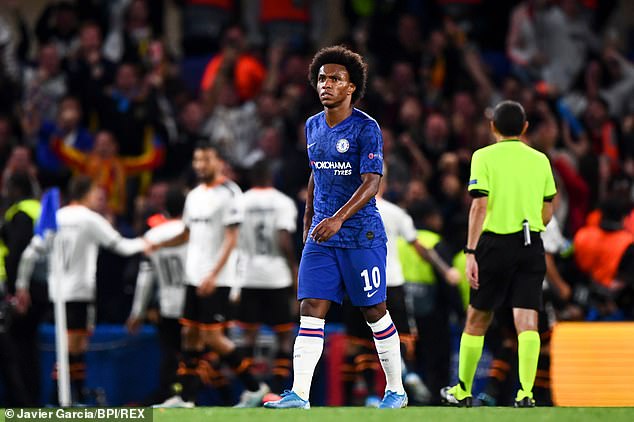 Team-mate Willian confirmed he had tried to take the kick, but backed his team-mate to bounce back from the disappointment.

Willian said: ‘I wanted to take it but he (Barkley) was confident to take it.

‘This is football. He missed the penalty but it could be me that missed, or Jorginho or whoever. So football is like this. But when we win, we win together, and when we lose, we lose together.’

Barkley added: ‘If there was another penalty in the game, I would have been confident of taking it,You can miss penalties. It’s not the end of the world. We’ve got five more group stage games to go that we’re aiming to win. The Valencia game just didn’t go our way, it’s disappointing really.’