Legendary AFL coach Ross Lyon is allegedly central to a sexual harassment payout made by the Fremantle Football Club to a former female employee.

News of a five-figure payout made by Fremantle to an employee broke last week and according to The Age, the deal was made as a result of comments made by Lyon.

Lyon, 51, allegedly harassed a junior employee at a Christmas function several years ago, making ‘inappropriate comments’ to her about the outfit she wore that night.

The woman reportedly wore casual clothes to work during the week but had dressed up for the function.

She no longer works at the club and reportedly launched a claim with Workcover in late last year.

Lyon told Fremantle about the matter in the aftermath of the Christmas party and an investigation cleared him of any wrongdoing, The Age reports.

A similar investigation by the AFL’s integrity unit also regarded the matter to be dealt with.

A father-of-three, Lyon joined Fremantle as head coach in 2012, in a controversial off-season move that is believed to be worth more than $1million-a-season.

Fremantle said in a statement last week, the incident was: ‘a workplace matter that has been resolved by the club’. 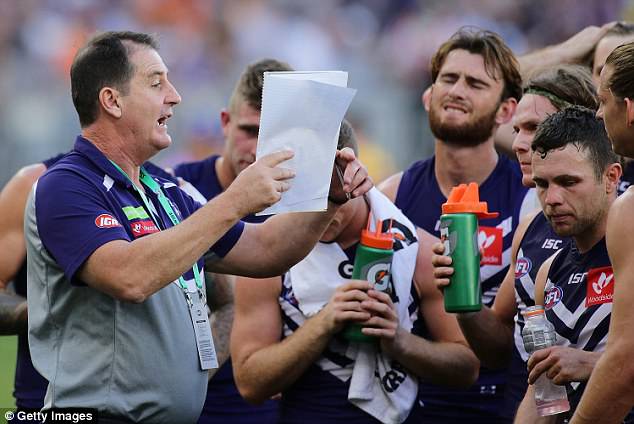 Lyon joined Fremantle as head coach in 2012, in a controversial off-season move that is believed to be worth more than $1million-a-season

AFL chief executive Gillon McLachlan last week said there were a ‘series of options’ available to clubs and the league to deal with sexual harassment claims.

When asked if payouts were in line with the AFL’s Respect and Responsibility Policy, McLachlan replied: ‘A core part of that policy is actually resolving the issue between the complainant and the person they are making the allegation against.

‘Part of the policy is for it to be confidential and there is a wide view, a wide series of options of getting a resolution without making any comment on what’s happened at Fremantle.’