Part of a shady international network that Kim Jong-un uses to smuggle luxury goods into North Korea has been exposed.

It is thought the route – which spans six countries and two continents – was used to ship two $500,000 Mercedes Maybach S600 cars to Kim’s regime last year in violation of international sanctions.

The data, compiled by the Center for Advanced Defense Studies, shows the extent to which North Korea must go to acquire goods that are readily available to the rest of the world. 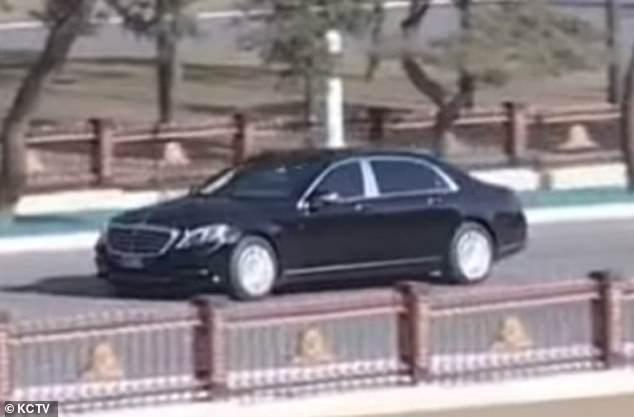 The cars departed the Netherlands at the end of June 2018 and were pictured in Pyongyang, North Korea, for the first time on January 31 (above)

Researchers say the route started in Rotterdam in June last year, when the two Maybachs were loaded on to a ship bound for Dalian, in northern China.

After 41 days at sea, the two containers arrived and were offloaded into the port where they spent more than three weeks sitting on the quayside.

On August 26, the containers were on the move again, this time to Osaka, Japan, where they spent another three weeks being idle.

From Osaka, they were taken to Busan, South Korea.

In Busan they were transferred to a cargo ship sailing under the flag of Togo which is owned by Do Young Shipping, registered in the Marshall Islands.

But, according to the New York Times, the owner of that shipping company is actually a Russian businessman called Danil Kazachuk, who is based in the far eastern port city of Vladivostok.

Once loaded on board the cargo ship, the vessel set sail for the Russian port of Nakhodka, but soon stopped transmitting its location. 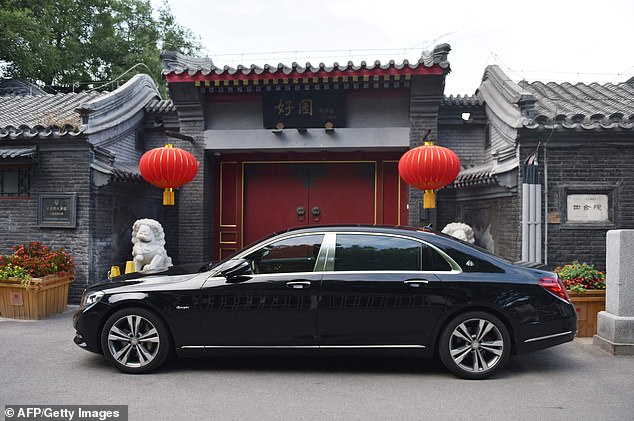 Kim is known to have a love for Mercedes cars, and is typically chauffeured around in a Maybach Pullman Guard, though sometimes takes the smaller S600 version (file)

The ship remained ‘dark’ for 18 days, before finally reappearing as it headed back to Busan, loaded with a cargo of coal.

The exact activities of the ship during the ‘dark’ period are unknown, but researchers believe it actually sailed to Vladivostok, where it unloaded the cars.

On October 7, three planes belonging to North Korea’s state-owned airline Air Koryo landed in the city on a rare visit.

The same three planes typically carry Kim’s limousines when he makes overseas visits, and researchers believe the Maybachs were loaded on to these planes and flown to Pyongyang.

On January 31, a Mercedes Maybach was filmed driving through the streets of the North Korea capital and Kim himself was pictured next to one as he met with an art delegation the same day.

Mr. Kazachuk acknowledged that he was responsible for the ship and its cargo when contacted by The Times, but refused to say what had become of the cargo, describing it as a ‘business secret’. 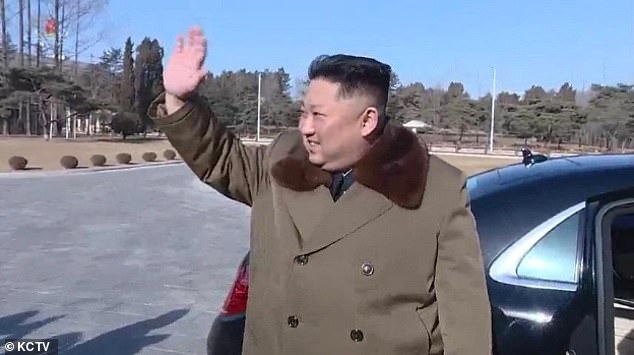 Researchers believe that networks similar to this one were used by North Korea to smuggle luxury goods worth $191million from around 90 countries to the Hermit Kingdom between 2015 and 2017.

All luxury goods were banned from North Korea in 2006 following a large nuclear test, and luxury cars have been specifically banned since 2013.

Kim is known to be fond of Mercedes cars, and is typically chauffeured around in a Mercedes Maybach Pullman Guard, which carries a price tag north of $1million.

The S600 is a smaller version of the same vehicle, and features massage seats and armour plating designed to protect against steel-core rounds.

He has also been spotted inside Rolls Royces.

Researchers hope that exposing the routes luxury goods take to North Korea will help disrupt the smuggling network and bolster the sanctions regime.

They also raise the prospect that networks used to ship components for weapons programmes could be one-and-the-same, and that disrupting one might interfere with the other.

‘As a result, their detection and seizure could be a means to drive action against the Kim regime’s core procurement operations.