Crystal Palace boss Roy Hodgson admitted his emotional farewell from Selhurst Park on Wednesday has proved to be his most memorable night as the club’s manager.

Hodgson, 73, confirmed on Tuesday he will step down from his post in charge of his boyhood club at the end of the season – and tributes to his fine work quickly flooded in from across the football world.

And on Wednesday evening ahead of his final game in charge of Palace at Selhurst Park against Arsenal – before one last trip to Liverpool on Sunday – Hodgson was given a special guard of honour from both teams while he received a rapturous reception from Eagles fans throughout. 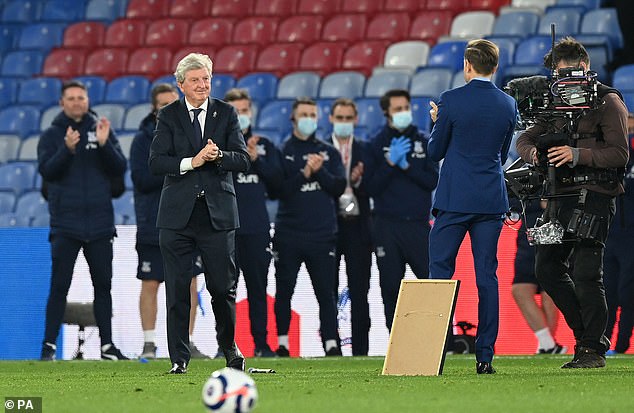 Roy Hodgson walks out at Selhurst Park as the manager of Crystal Palace for the final time ¿¿ pic.twitter.com/5al0v6kUJC

Following the final whistle, after Arsenal scored two injury-time goals to seal a 3-1 victory, Hodgson also was given the chance to address the returning supporters at Selhurst Park.

Hodgson said: ‘I know what my favourite moment would have been if you asked me the question with some sort of distance to tonight. And it will undoubtedly be tonight.

‘That will be my abiding memory, that outpouring of affection and appreciation for the job Ray (Lewington) and I, and the rest of the staff have done here. You don’t always get that at a football club.’

It was an electric atmosphere throughout with numerous chants towards Hodgson and plenty of booing in the direction of Arsenal players, mostly Kieran Tierney after an early spat with Joel Ward.

The Eagles had chances to give their manager of fours years a fairytale ending, but Jordan Ayew had a close-range effort saved and Wilfried Zaha saw penalty appeals waved away. 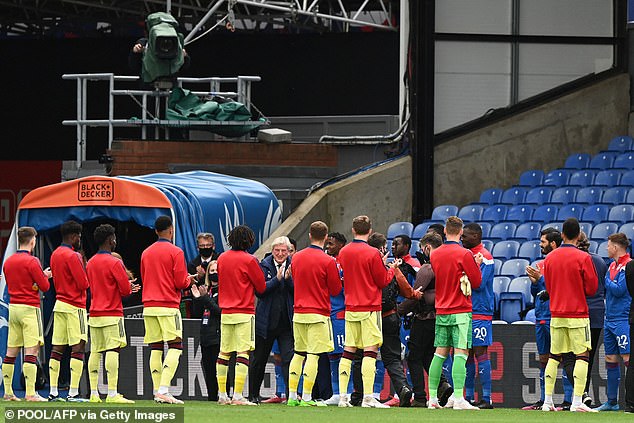 It left the London derby on a knife-edge and Arsenal inflicted two late blows with Martinelli and Pepe able to produce composed finishes inside the area in the first and fifth minute of stoppage time.

But Hodgson insisted that even a cruel late defeat couldn’t dampen his spirits, adding: ‘I am a bit drained, I suppose but it has been such a fantastic couple of days.

‘I have been really knocked over by all the kind words and everything that happened here tonight.

‘And yet I have seen us lose a game in the last five minutes. A game I thought we were good value for a point, so I am afraid the football part of me still feels that, but I know I should be looking at the bigger picture.

‘I should celebrate the wonderful reception I got, the guard of honour and once more the performance the players put in, especially in the second half where we really took the game to Arsenal.

‘I am hoping when the dust settles, I will have a happier feeling about what happened. The one thing I certainly will never forget is the reception I have been given.’ 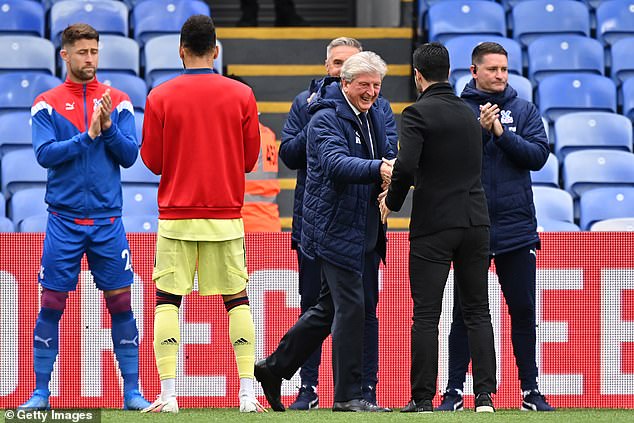 Meanwhile Arsenal boss Mikel Arteta, who labelled Hodgson as a ‘legend of the game’, admitted that the send-off his counterpart received was very emotional.

Arteta told BBC Sport: ‘Very emotional. I thought it was great to have fans on his day because he deserves what happened before and right now. An incredible achievement. He’s someone to try to emulate because what he’s done in football is remarkable.’

Arteta lined up alongside his Arsenal stars with Palace players the other side as Hodgson emerged from the tunnel for his guard of honour before walking to the Selhurst Park dugout for one last time before the match got underway.

The fixture marked the return of Palace supporters at the ground, and the thousands also joined in with applause and chants to celebrate Hodgson’s achievements and wish him well for the future after an astonishing 45 years in management.

A well-travelled Hodgson looked visibly emotional with the rapturous atmosphere, and the veteran coach was unable to hide a rich smile while he walked between both teams and shared a handshake with Arteta. 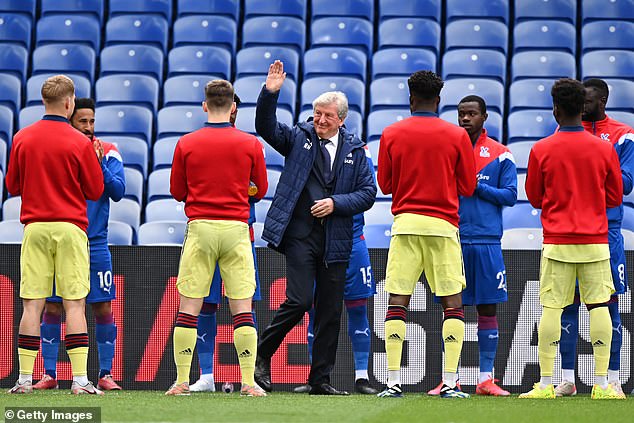 Having helped to stabilise Palace over his four-year tenure, Hodgson departs on good terms with the club – and he has refused to rule out returning to football after enjoying some time away.

Hodgson insisted that his decision is to ‘step away from the rigours’ of the top-flight, hinting at a comeback in the future.

He added: ‘To suddenly start making the bold statement about “retirement” and “this is the end of me in the world of football”… I really don’t know.

‘It’s a dangerous thing to do when you still feel good about yourself and still enjoy your life in football. 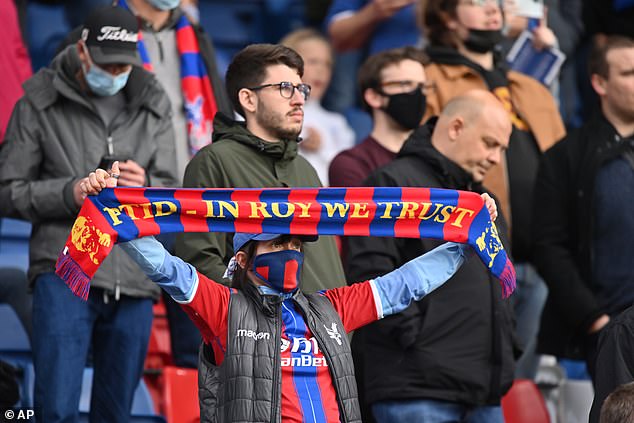 ‘I’m stepping down from the club and away from football for a while. I still have a future I’m looking forward to, whether that be in football or elsewhere. It’s a never say never moment.’

Hodgson told his Palace players of his final decision on Monday morning to help the club begin their planning for next season and beyond.

Palace had anticipated Hodgson’s exit and, as a result, were working on drawing up contingency plans for a possible replacement. They are yet to pick out a preferred candidate, however.