Crowning glory! Royal Ascot revellers pull out all the stops for Ladies Day in VERY elaborate hats and shorter hemlines as the sun finally appears

Royal Ascot Ladies Day is one of the most glamorous occasions in the British social calendar and racegoers certainly did not disappoint as they kicked off the festivities this morning.

Classic white sundresses, extravagant headpieces and very daring leg hemlines were all on show as hundreds of well-heeled revellers descended on the Berkshire racecourse for the third day of the meet.

Among the early arrivals was a woman who brought an edgy twist to the dress code with a black long-sleeve dress with a revealing thigh-high slit, and another who turned heads in a neon pink hat covered in oversized pom poms.

Others plumped for costume-inspired looks with a Queen of Hearts ensemble – complete with faux crown – and Union Jack dress both spotted in the crowds.

Fortunately for revellers, yesterday’s heavy rain has cleared and been replaced with glorious sunshine, which will surely encourage even more trackside fun and frolics. 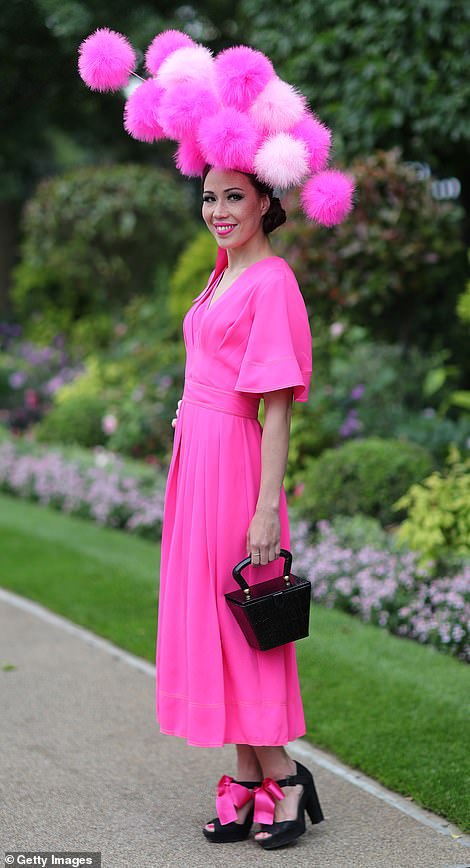 Think pink! Whether it was a pretty daisy print, left, or all vibrant neon, right, pink proved a popular choice for Ladies’ Day 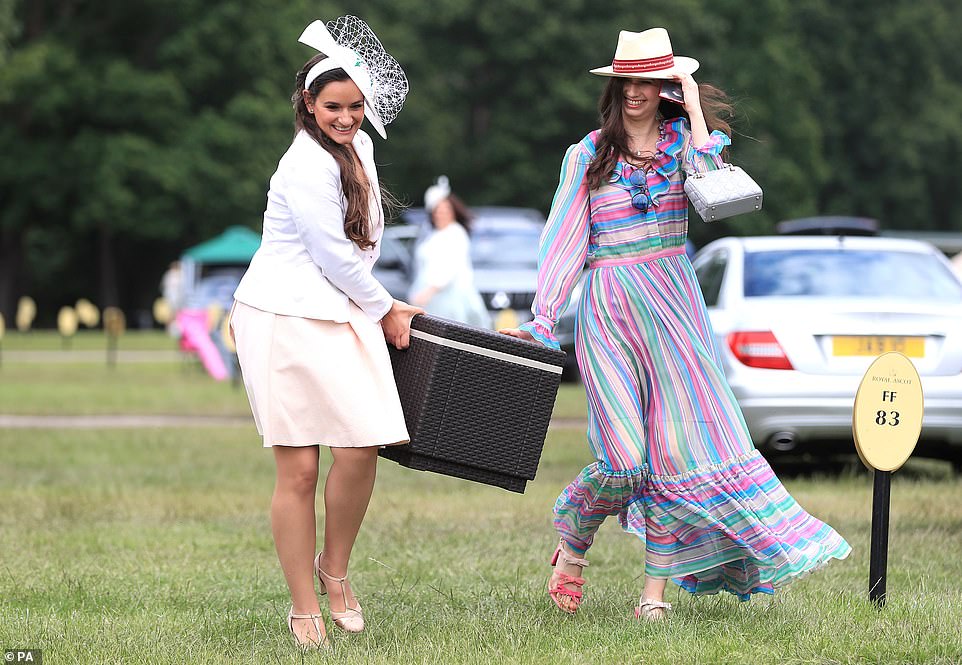 Ready for the day! Two women came prepared with their own cool box as they kicked off the fun at Royal Ascot Ladies’ Day 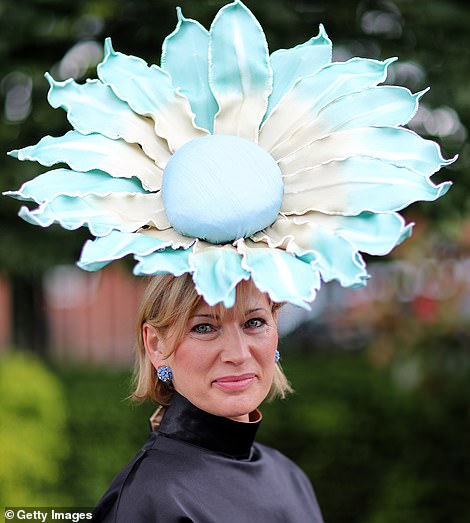 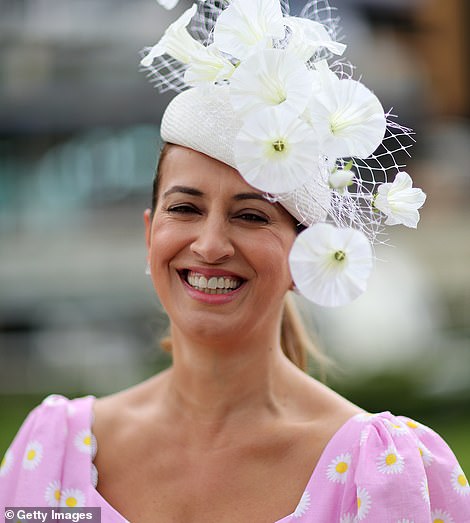 Flower power! A striking blue creation, left, and a pretty white hat, right, were both on show as Ladies’ Day started

Visitors to the Royal and Queen Anne enclosures have to abide by a strict dress code, which does not allow bare midriffs or strapless dresses, but for guests in the Windsor and other enclosures the rules are more relaxed.

The term Ladies Day was first used in 1823 when an anonymous poet described the Thursday of the annual meeting as ‘Ladies’ Day … when the women, like angels, look sweetly divine.’

While there is no official prize on offer for best dressed lady as there is at other race meetings, ticket holders were still eager to put their best foot forward.

Up to 300,000 people are due to descend on the event over the course of five days and naturally the stylish day out is a magnet for celebrities, and is predicted to be a star-studded occasion.

With the clue in the name, Royal Ascot is hugely popular with the monarchy and Her Majesty has attended every year since ascending the throne. 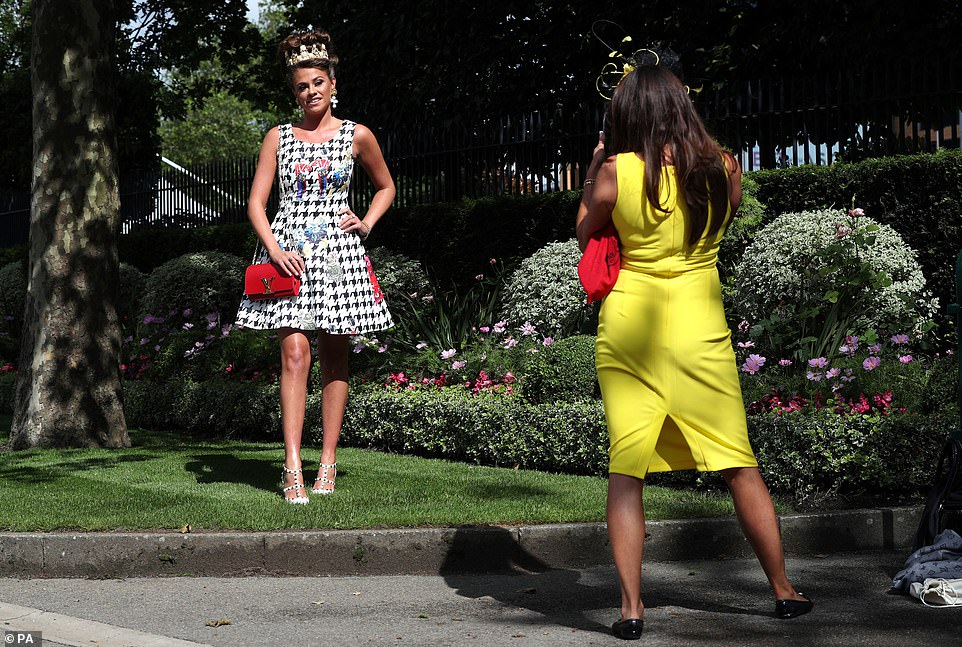 Strike a pose! Racegoer Claudia Smith in a Queen of Hearts inspired ensemble posed for a photo on her way into the course 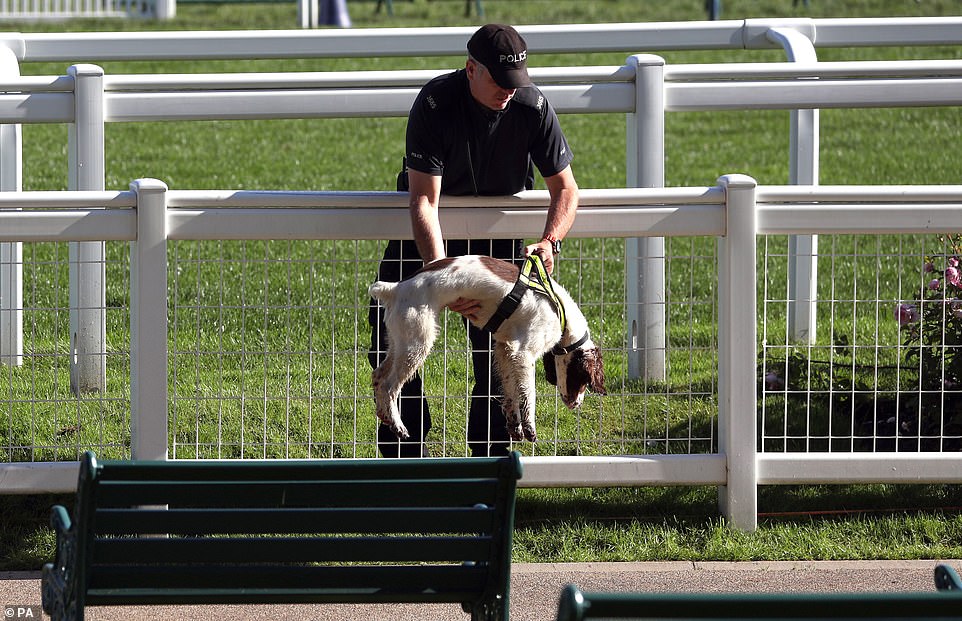 On patrol: A policeman lowers his sniffer dog onto the opposite side of the fence as day three gets underway at Royal Ascot 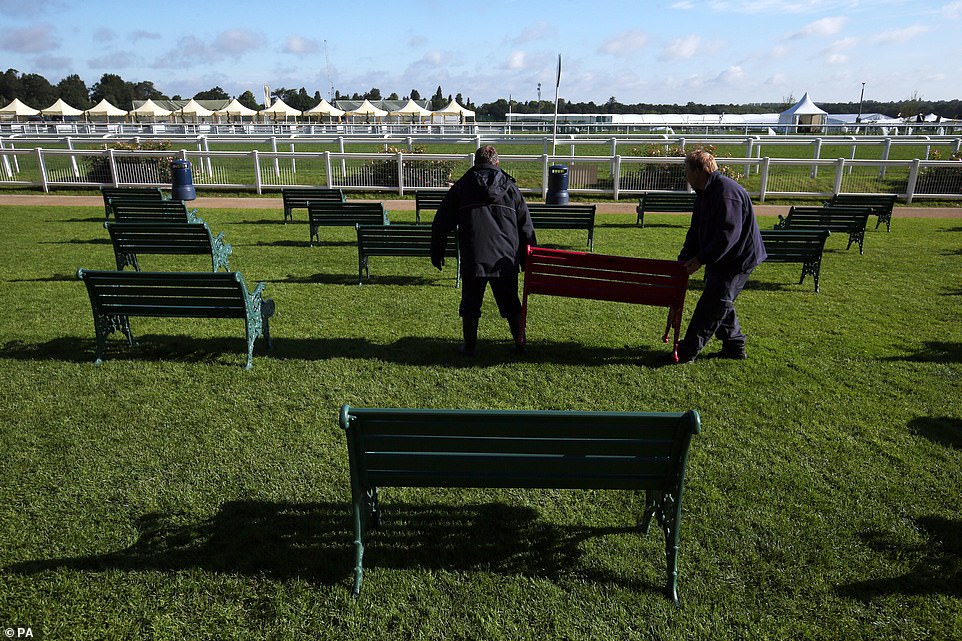 Calm before the storm: Groundsmen move benches in front of the grandstand ahead of day three of Royal Ascot 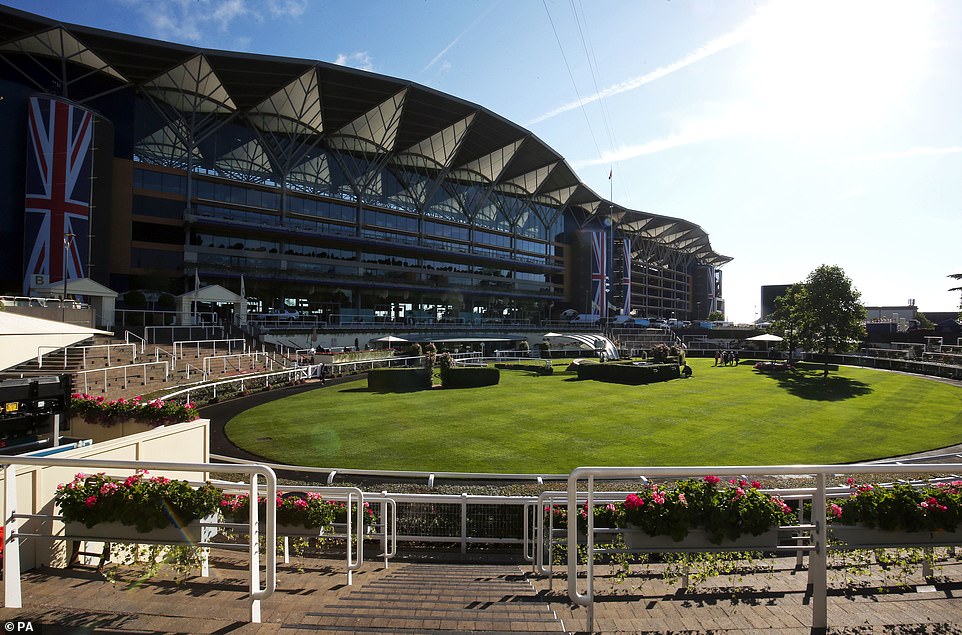 The sun is shining! After battling the elements yesterday, racegoers look set to enjoy better weather at the course today