Royal Mint fury as Queen’s head is defaced with swastikas

A customer was horrified after she was given a 50p piece defaced with Nazi symbols at a petrol station.

Nicola Harrison, 37, spotted the Nazi Party’s eagle symbol, the Reichsadler stamped over Queen Elizabeth’s head on a 50p she was given in change at the service station in Leeds, West Yorkshire.

Now the Royal Mint has said it is aware of offensive coins in circulation amid concerns a Hitler enthusiast is stamping them at home.

Nicola Harrison, 37, spotted the Nazi Party’s eagle symbol, the Reichsadler stamped over Queen Elizabeth’s head on a 50p she was given in change at the service station in Leeds

The 1997 coin was also defaced with a swastika. Ms Harrison posted a photograph of her 50p coin on Facebook at the weekend to ask if anyone else had seen one.

She said she was now ‘too scared to spend it in case she gets arrested’.

Nicola was given it in change after she bought a drink with a £5 note at a petrol station in Leeds, West Yorkshire.

‘I have never seen a coin with this on,’ she said.

‘I don’t like what it represents at all. My first thought was how has someone managed to get away with this?’

The Mint’s Currency Security Technical Expert, Scott Kuperus, said: ‘The Royal Mint strongly disapproves of the defacing of coins in this way, as such action could bring into question the integrity of the United Kingdom coinage.

‘Doing so is often counterproductive as the defaced coins are quickly removed from circulation.’

Similar coins have been found in Germany, where Nazi symbols are illegal. 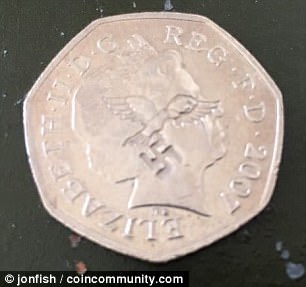 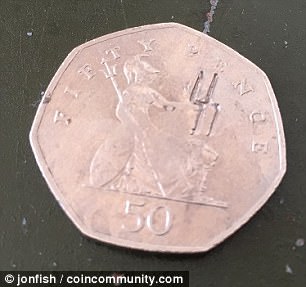 German law prohibits ‘use of symbols of unconstitutional organisations,’ encompassing all Nazi symbolism and, as a result, the swastika.

The German Strafgesetzbuch (Criminal Code) section 86a bans any form of display of a swastika, even if used in ‘innocent’ situations. 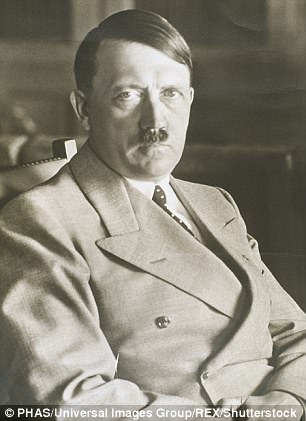 There is speculation a Nazi or Hitler enthusiast is stamping coins

Earlier this year, a Euro 2 coin was discovered at a restaurant in the city of Neuss stamped with banned imperial eagles and a swastika.

He said: ‘This is the first I’ve seen of this and hopefully the last.

‘Being very honest, I can’t imagine these being worth anything as I can’t believe there’s anyone who’d want to buy them.’

A 50p discovered in July 2015 was stamped with a bird carrying a Swastika and on the other side the initials SS – representing the Nazi paramilitary Schutzstaffel group.

On a thread on the subject, posted on chat site Reddit, one coin enthusiast said: ‘Someone out there is pretty dedicated, and I’d like to know which die manufacturer would create a Nazi stamp.’

Another coin collector said he’d found the symbols on a £2 coin he received in Coventry.