Royal Navy only ordered one carrier, four patrol vessels, five subs and a frigate for next TEN YEARS

The Royal Navy has only ordered one aircraft carrier, one submarine, a handful of offshore patrol vessels and a frigate for the next decade as a report says its force will shrink even further.

It comes as serious questions have been raised over Britain’s ability to defend itself following attacks on Union Jack-flagged vessels by Iran.

The aircraft carrier HMS Prince of Wales, which will be a sister to HMS Queen Elizabeth, is the only other of the behemoths in the pipeline – but will not be commissioned until next year.

There are two types of submarines underway, with the four Astute class vessels expected to be commissioned over the next five years.

Dreadnought-class nuclear ballistic missile submarines are also set to be part of the Royal Navy’s fleet, yet just one out of the four planned is being built and will not be ready until 2028.

In a bid to stem the flow of migrants trying to reach the UK mainland, four river-class offshore patrol vessels are being developed and all are expected to be operational by the end of this year.

A fleet of frigates are to join the UK’s defence force, but again details surrounding these are sketchy, as only one – HMS Glasgow – has been given a commissioning date of 2026.

It comes after an independent report warned of the threat to Britain if it continues to scale down its Navy.

Sir John Parker, who wrote a review on the National Shipbuilding Strategy, said the frigate fleet risks falling below 13 unless a new breed of Type 31s are built soon.

Julian Lewis MP asked him during a Defence Select Committee session on the National Shipbuilding Strategy last year: ‘So what you are saying—and this is a critical point—is that unless we start building the Type 31e frigates in parallel with the Type 26s, there is little chance of not reducing below our existing figure of 13 frigates all told.

‘That, I must say, fits in with the projections I have seen and it follows from that, therefore, that we have to consider the best way of building two classes of frigates in parallel, rather than in succession.’

The sister ship to HMS Queen Elizabeth, which has delighted crowds as it sits in Portsmouth harbour, HMS Prince of Wales has had a confusing route to construction.

There was growing uncertainty over the second ship in the fleet, but the then Prime Minister David Cameron confirmed in September 2014 that she too would take to the seas – with it planned for her to be starting trials this year.

The 65-000 tonne behemoth had been taking shape at Rosyth Dockyard in Fife over the past five years and was built in the record-breaking design of the £3.1billion HMS Queen Elizabeth.

The sister ship to HMS Queen Elizabeth, which has delighted crowds as it sits in Portsmouth harbour, HMS Prince of Wales (pictured) has had a confusing route to construction

The Prince of Wales, however, is not planned to be commissioned until 2020.

However, it will be one of the most powerful surface warships ever constructed in the UK, boasting a flight deck more than three football pitches long.

Its size it was makes it noteworthy, as it will be able to store 36 F-35B and four Merlin Helicopters as it sails.

The ship, which has been described as a floating city, is expected to last for 50 years and will have the option to travel 500 miles a day if needed.

Either HMS Prince of Wales or HMS Queen Elizabeth can expect to be transformed so they could work in amphibious operations, according to the Strategic Defence and Security Review 2015.

This comes after the decommission of the HMS Ocean last year, which had been the navy’s helicopter landing ship.

The Dreadnought class of ballistic submarines is currently being built for the Royal Navy.

Successor was the name for the programme until the first boat was named as HMS Dreadnought in October 2016.

The Dreadnought class are being made to take over from the Vanguard class submarines from 2028 – and will host the UK’s nuclear deterrent. 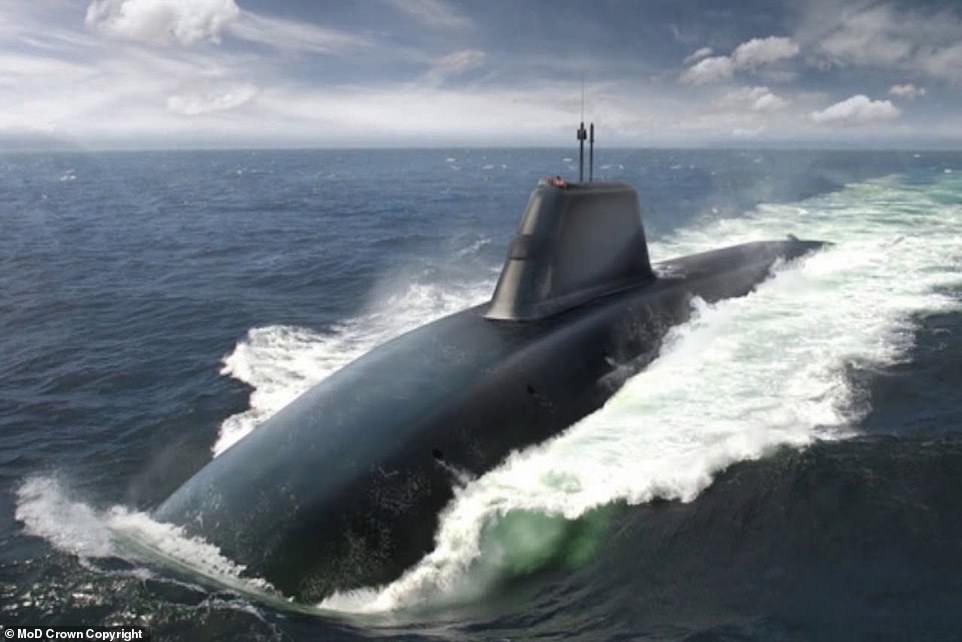 Last year, it was announced an extra £600million would be ploughed into a new generation of ‘dreadnought’ submarine (pictured) – which would carry the UK’s nuclear deterrent

The idea for the name being the sub was ‘dread nought’ – or to fear nothing.

The vessel is being made in Barrow-in-Furness shipyard in Cumbria and will be the largest ever created by Britain at more than 17,200 tonnes and 504ft. 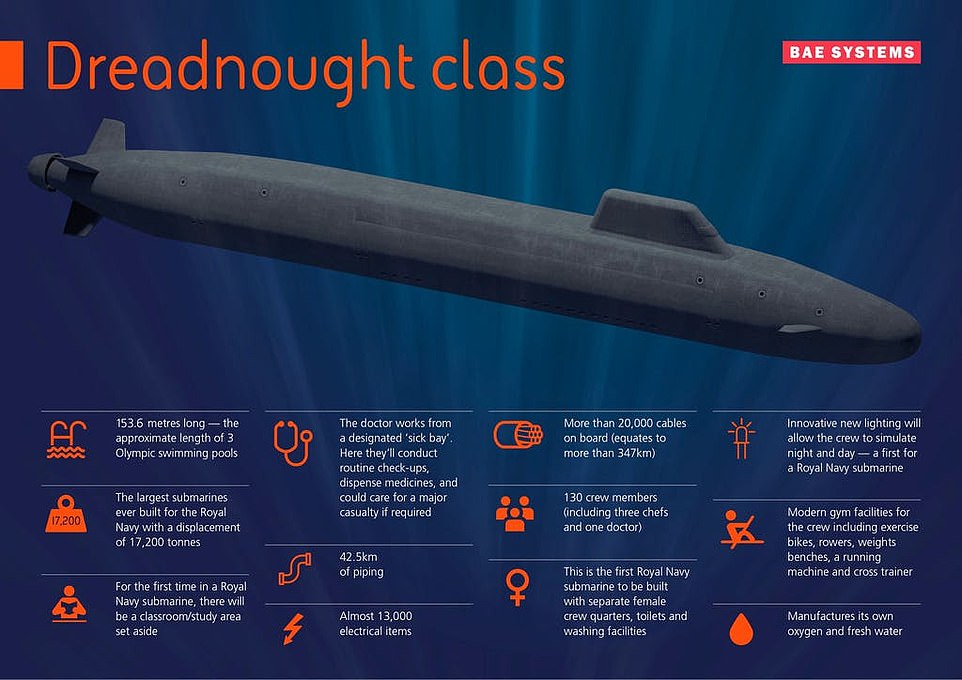 Last year, it was announced an extra £600million would be ploughed into the class of nuclear submarine, rising the total cost to more than £31billion.

The ballistic subs are expected to last between 35 and 40 years, which is an increase of 25 per cent over the previous class the Navy used, but it is yet to be announced when the rest of the Dreadnought fleet will be made.

The Astute class are a fleet of submarines that, unlike the Dreadnought class, have an expected finished date.

The four ships – called Audacious, Anson, Agamemnon, Agincourt – will be completed between now and 2024.

Being the most advanced and most powerful attack submarines ever operated by the Royal Navy, the vessels combine specialist sensors, design and weaponry in a versatile vessel. 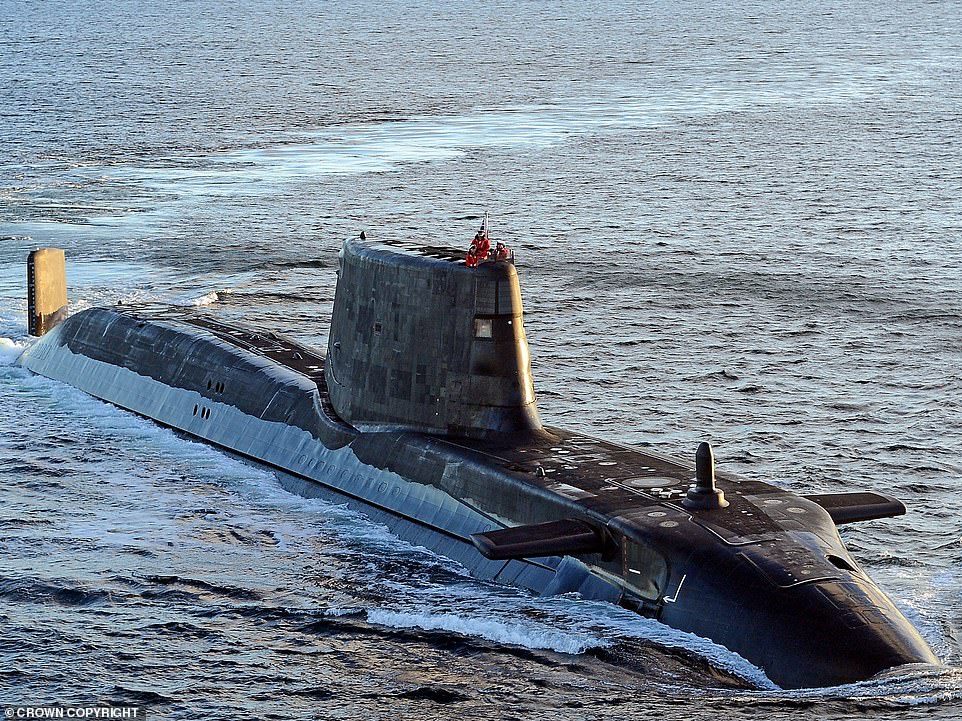 The Astute class (pictured) are a fleet of submarines that, unlike the Dreadnought class, have an expected finished date

Some of its weapons are particularly specialised, with the the Tomahawk IV allowing it to strike at ground targets hundreds of miles inland with extreme accuracy.

They are also powered by a nuclear reactor that can run for their 25-year lifespan without refuelling.

As the UK struggles to patrol its border as more migrants desperately try to reach its shores, vehicles such as these are in high demand.

From November 2013, plans were made to build three new boats, which would have the ability to launch Merlin helicopters from its deck.

But in last year’s National Security Capability Review it said there would be five of these offshore patrol vessels. 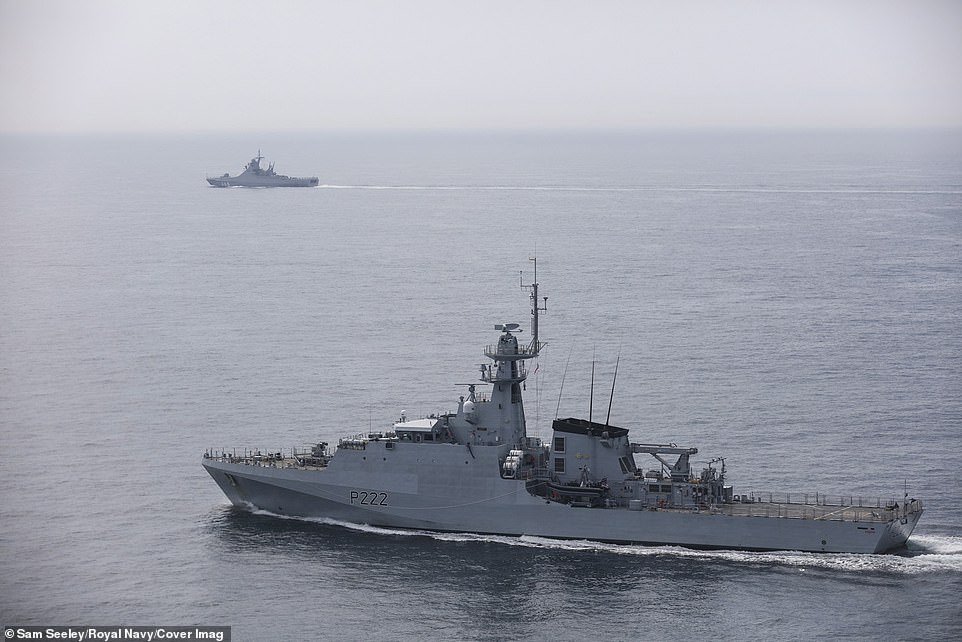 The HMS Forth, which was commissioned in April 2018, is the first of the new vessels and hit headlines last month when it escorted Russian warship Vasily Bykov through the English Channel on her first week of service.

After patrols around the UK, HMS Forth is due to be sent to the Falklands at the end of this year to replace HMS Clyde as the islands’ permanent naval guardian.

It will be joined by HMS Medway, Trent, Tamar and Spey, which are all expected this year.

The small boats can only house 60 servicemen, but have a range of 5,500 nautical miles and can hit speeds of more than 20 knots.

The remit for these boats is to protect the nation’s interests at sea, whether that means safeguarding fishing stocks in UK waters, or offering reassurance and protection in the Falklands on the other side of the world.

She also has a flight deck and is armed with an array of weaponry, meaning she can support a range of operations, from counter-piracy to anti-smuggling.

The number of frigates has also taken a battering.

The Navy has 13 of its Type 23 frigates, with an unknown number in maintenance, but these are based on outdated technology – the first Type 23 Frigate entered service in 1989.

Some of the older ships are being upgraded to replace their outdated Falklands-era fossils.

It is understood that the active ones include the HMS Montrose, which is has been deployed Arabian Gulf for three years, HMS St Albans, HMS Sutherland, HMS Argyll and HMS Northumberland which are in UK waters, HMS Kent, which is preparing to deploy to the Gulf, and HMS Westminster, which recently returned from Baltic exercises.

But the list of inactive frigates is also long, with HMS Richmond, HMS Lancaster, HMS Somerset, HMS Portland, HMS Iron Duke – all being in for extensive refit at the Navy’s Devonport base in Plymouth.

There is also the HMS Monmouth, which is awaiting a refit.

The Navy is set to launch a new type of frigate called the Type 26 class, which will partially replace the exhausted Type 23s.

The Navy is set to launch a new type of frigate called the Type 26 class, which will partially replace the exhausted Type 23s

Work began on the first of eight, HMS Glasgow, in Scotland in July 2017 and it will enter service in the mid 2020s.

The ships will specialise in anti-submarine warfare and work closely with the Navy’s Trident nuclear deterrent and the two new aircraft carriers.

The fleet will eventually completely replace the current Type 23 frigates.

The contract for the second batch of five ships will be negotiated in the early 2020s.

After this will come the second batch of frigates, Type 31e General Purpose Frigates, which will enter service by 2023.