Going home for the first time: Royal Navy’s newest aircraft carrier the £3.1bn HMS Prince Of Wales dwarfs houses at it sails into its new Portsmouth base after passing tough sea trial tests

The Royal Navy’s newest aircraft carrier, the £3.1billion HMS Prince of Wales, sailed into its base at Portsmouth for the first time today.

The 65,000-tonne warship dwarfed the surrounding buildings as it arrived at the mouth of Portsmouth Harbour, Hampshire, and was welcomed by a fly-past of two Hawk jets and a Wildcat helicopter.

Shipping lanes were closed and an air exclusion zone put in place as part of security measures for the arrival.

The Royal Navy’s newest aircraft carrier, the £3.1billion HMS Prince of Wales, sailed into its base at Portsmouth for the first time after passing rigorous sea trial tests (pictured) 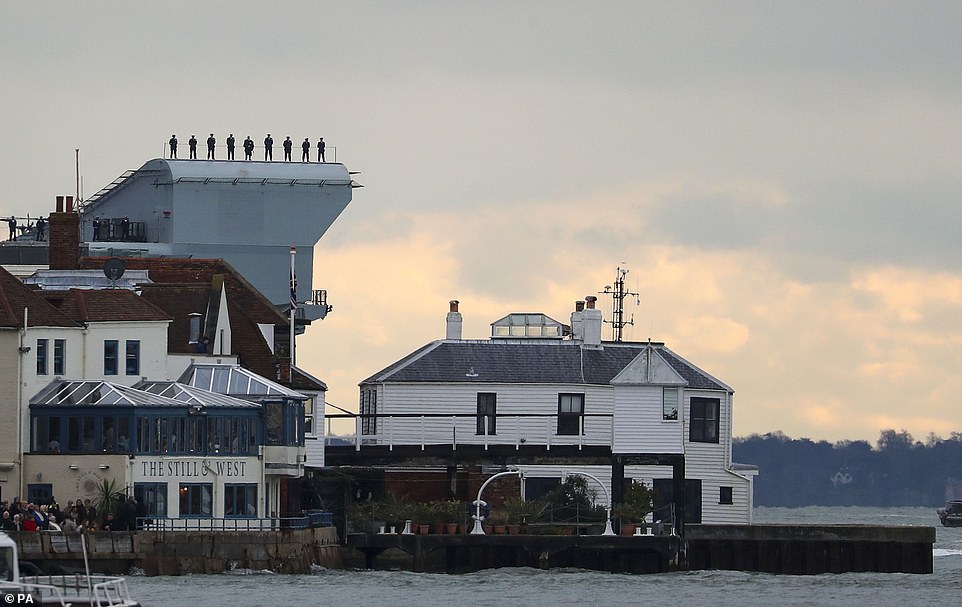 Sailors lined the flight deck (pictured) as the £3.1billion carrier approached the dedicated Princess Royal jetty at the naval base in Portsmouth Harbour, Hampshire 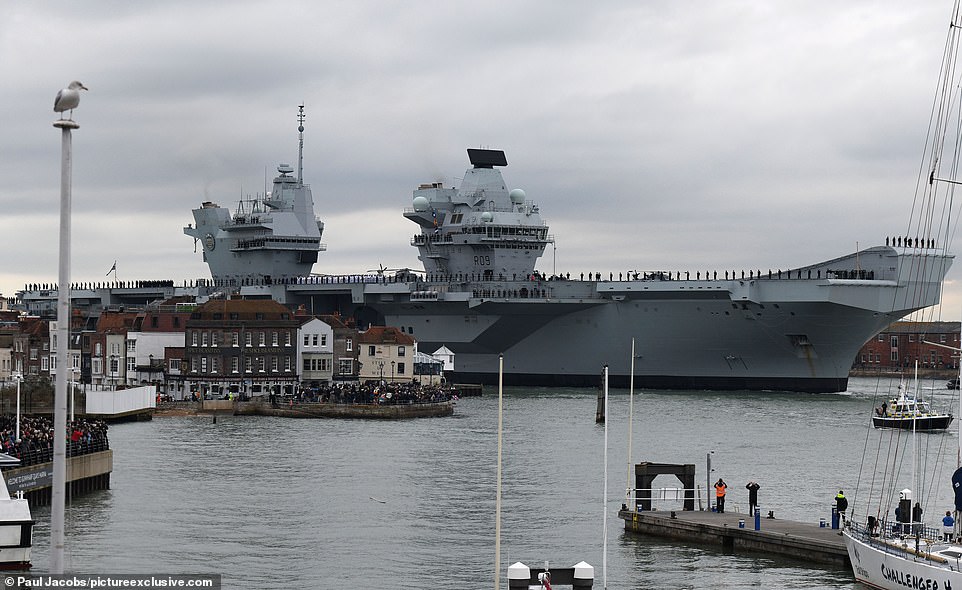 The 65,000-tonne warship dwarfed the surrounding buildings (pictured) as it returned from eight weeks of rigorous sea trials

Sailors lined the flight deck as the £3.1billion carrier approached the dedicated Princess Royal jetty at the naval base.

Commanding officer Captain Darren Houston said: ‘Our first entry to Portsmouth represents the successful culmination of the build and sea trials period in which my ship’s company and industry partners have worked so closely together to bring HMS Prince of Wales into service with the fleet.

‘I am extremely proud of them and their families for their perseverance, patience and extraordinary efforts.’

Air engineering technician Ben Daniels, one of the 600-strong crew on board along with 300 contractors, said: ‘I feel immensely proud to be a member of HMS Prince of Wales’s ship’s company while the ship is heading into its home port for the first time.

‘It is a historic moment for the Royal Navy and I am looking forward to many years of service on this incredible ship.’ 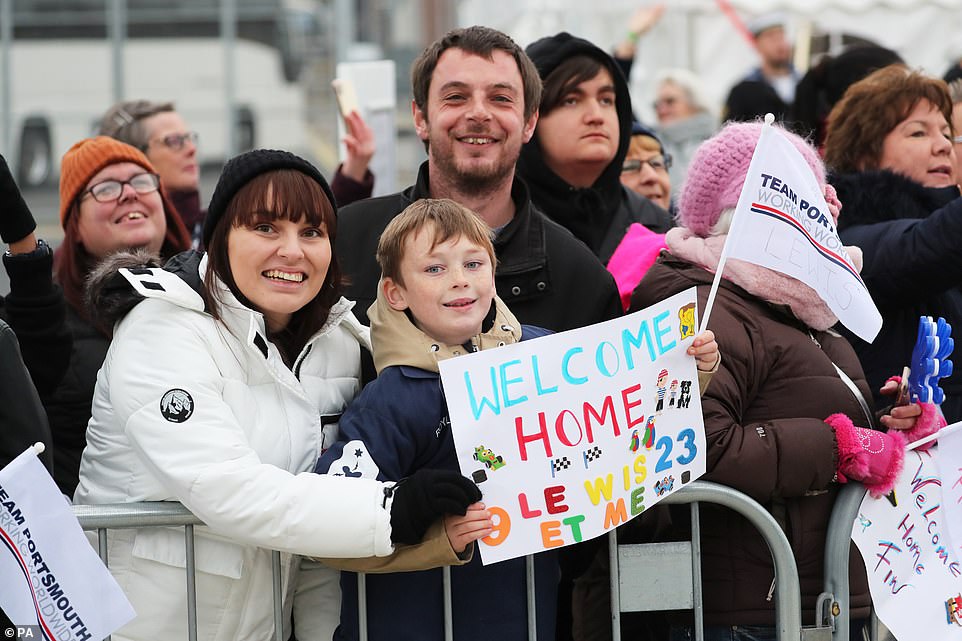 Hundreds of people lined the sea walls to see the ship on its arrival with many holding placards that read: ‘Welcome Home’ 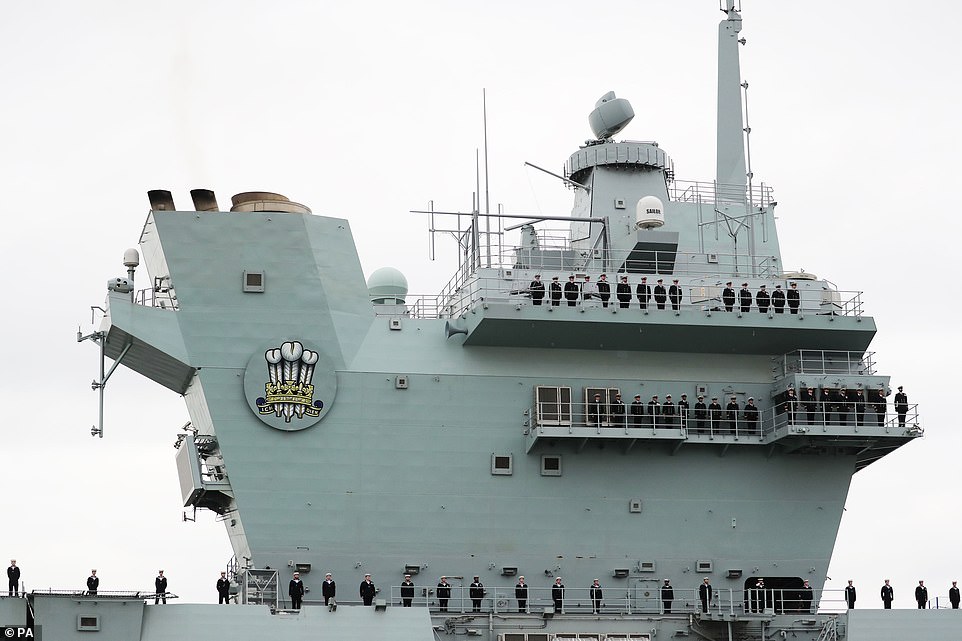 The carrier left Rosyth dockyard in Fife, eastern Scotland, where it was built in September. Pictured: Members of the crew lined the tiers of the warship as it sailed in 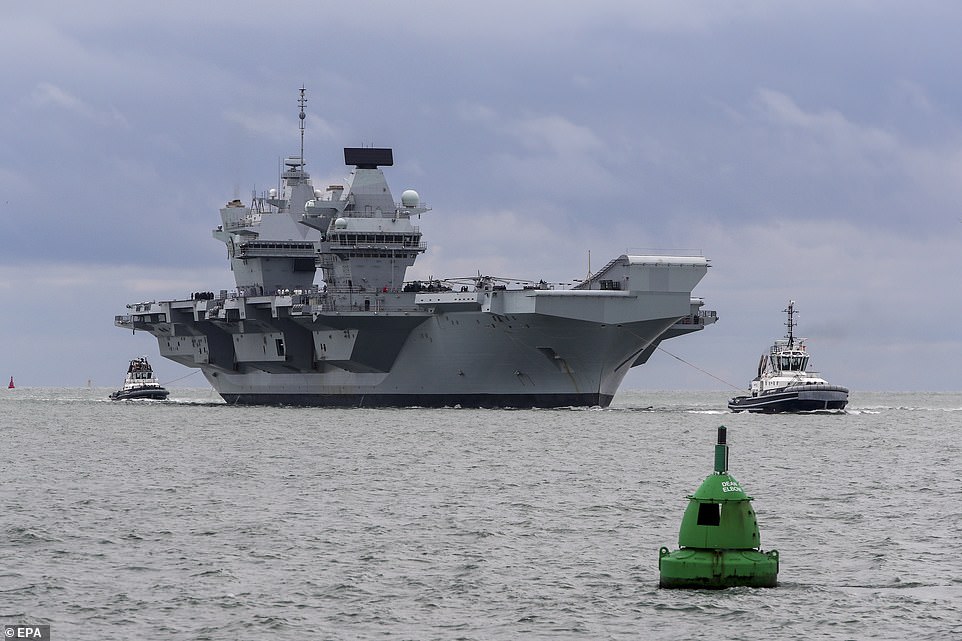 The carrier left Rosyth dockyard in Fife, eastern Scotland, where it was built in September before undergoing eight weeks of sea trials ahead of its arrival in Portsmouth.

A Navy spokesman said: ‘During the trials, the first aircraft touched down on the flight deck, as a Merlin helicopter was guided safely into land, before the ship then hit top speed as she tested her engines to the max.

‘Following a brief pit stop in Invergordon (northern Scotland), HMS Prince of Wales was tested in heavier seas to see how she handles in challenging weather.

‘The carrier faced waves up to 20ft high and carved through them relatively untroubled.’ 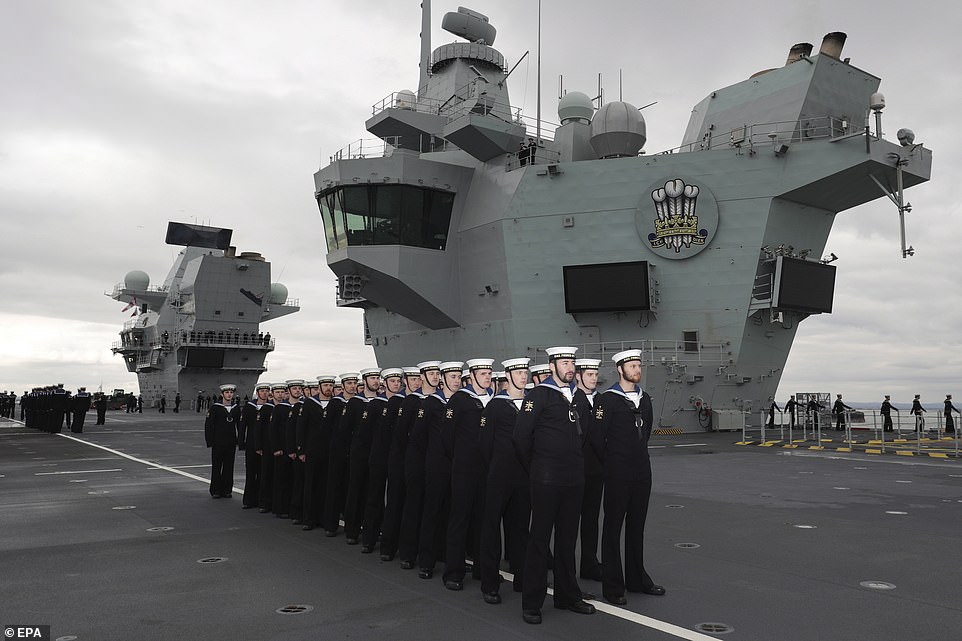 HMS Prince of Wales is set to be formally commissioned before the end of the year. Pictured: Sailors lining the flight deck of the British Royal Navy’s aircraft carrier 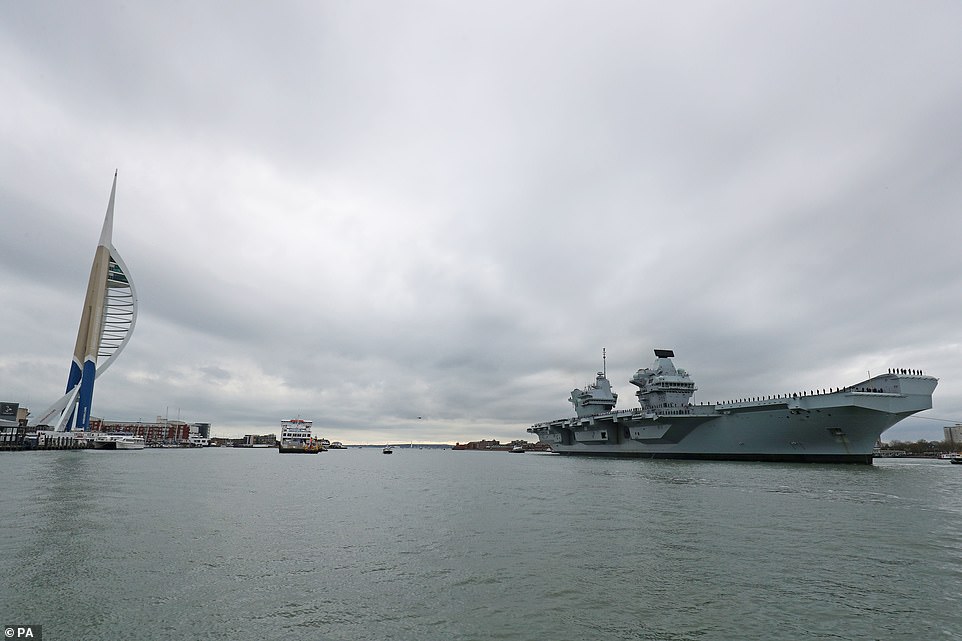 Overall, six shipyards around the UK – Appledore, Birkenhead, Govan, Portsmouth, Rosyth and Tyne – have been involved in building various parts of the HMS Prince Of Wales (pictured) and its sister ship HMS Queen Elizabeth

The carrier’s sister ship, HMS Queen Elizabeth, is also based at Portsmouth but is currently on a visit to the USA to undergo trials of the F35 Lightning jet fighters ahead of its first operational deployment planned for 2021.

Major upgrade work has been carried out at the jetties at Portsmouth so the two giant ships can berth next to each other.

During their 50-year service, the two 280-metre long aircraft carriers can be pressed into action for various work such as high intensity war fighting or providing humanitarian aid and disaster relief.

They have been built by the Aircraft Carrier Alliance (ACA) – a partnership of BAE Systems, Babcock, Thales and the Ministry of Defence.

Overall, six shipyards around the UK – Appledore, Birkenhead, Govan, Portsmouth, Rosyth and Tyne – have been involved in building various parts of the carriers.

HMS Prince of Wales is set to be formally commissioned before the end of the year.