Under the terms of the deal, shareholders in RPS will still be entitled to any interim dividend for the six-month period to 30 June up to 0.45p per share.

‘Applying an information-led approach to environment and heritage consulting’, RPS Group works with clients ‘to manage the interface between built and natural environments’

It marks the second time this summer Toronto-based WSP has swooped on London-listed business, having agreed to buy Wood Group’s environmental consulting business for £1.5billion back in June.

Founded in 1970 and headquartered in Abingdon, Oxfordshire, RPS employs 5,000 staff across 125 countries.

The acquisition represents a multiple of approximately 14.9x RPS Group’s adjusted earnings in the year to 30 June ‘once the full benefit of expected synergies are taken into account’, WSP said.

In order to be confirmed, the deal requires at least 75 per cent of RPS shareholders to approve the deal at tits next general meeting.

RPS shares were up 74.4 per cent to 204p approach midday, having nearly doubled in value over the last year.

Ken Lever, chairman of RPS, said: ‘The RPS Directors believe that RPS has a clear strategy and is strongly positioned for the future, underpinned by favourable trends in its end markets and the benefits that are starting to flow from investments in RPS’ talent programme, brand, marketing strategy and technology initiatives.

‘However, this is a compelling offer from WSP which fully values the business and its future prospects.

‘It represents a highly attractive premium to recent trading levels and provides certain value in cash today for RPS shareholders.

‘The RPS Directors also believe that the acquisition will provide career opportunities for our employees within the enlarged WSP Group as well as access to a comprehensive and expanded service offering for our clients.’

President and chief executive of WSP Global Alexandre J. L’Heureux added: ‘Combining the capabilities of the RPS Group and the WSP Group is strategically compelling and will allow us to leverage our collective know-how and provide a broader range of complementary services to our clients while building a world-class ESG advisory business.

‘We are looking forward to welcoming the RPS Group’s talented employees and believe they will benefit from the expanded career and development opportunities this acquisition will bring the employees of both firms.’ 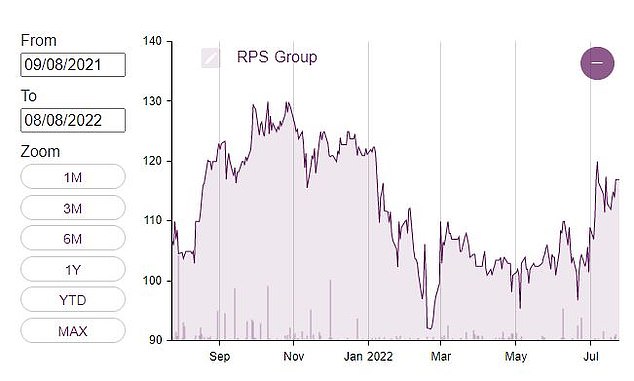