Like a nervous Grandma, the RSC will have you over again, but insists you stay in the garden. Specifically, in its Covid-friendly Lydia & Manfred Gorvy Garden Theatre: an intimate outdoor amphitheatre named after the billionaires who forked out for it.

On a sultry July evening — can of cold wine clutched in my fist, the splash of Avon rowers keeping a beat in the background — this production finally made it in front of a live audience, a mere year-and-a-bit later than planned.

‘It has been so, so hard,’ the RSC’s artistic director Gregory Doran told me beforehand, slipping down his mask. ‘With this theatre, we’re in luck.’ No roof means, distanced or not, they can still make it work, and make it safe.

The Comedy Of Errors — not the spicy Dido Harding satire you just know is coming, but that Stratford staple — is transplanted to a world which appears to be a mash-up of Middle Eastern wealth and 1980s Britain style, or lack thereof. 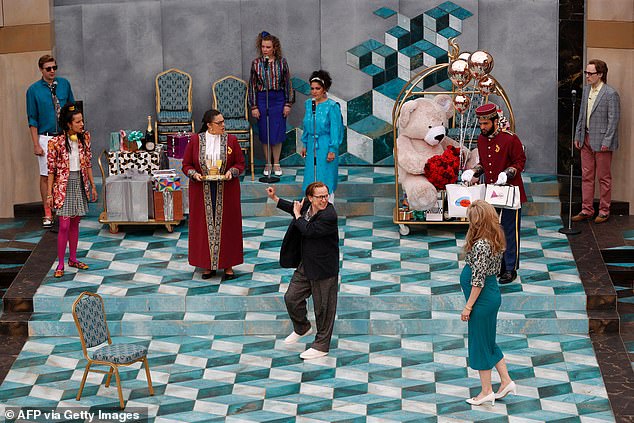 Like a nervous Grandma, the RSC will have you over again, but insists you stay in the garden. Specifically, in its Covid-friendly Lydia & Manfred Gorvy Garden Theatre: an intimate outdoor amphitheatre named after the billionaires who forked out for it

Think vibrant shades of teal, big frizzy hair, shoulder pads under ornate robes, and beardy soldiers with swords. Designer Max Jones has us in a tiled piazza, with festoon lights drooping round us.

The dire mishap which gives the play its title is long-lost twins with the same name, finally crossing paths in the same town… while handily dressed in the same outfits. Oh, and each with a servant who’s also a long-lost twin. Also named and dressed the same. Cue comedy.

A passing waiter gives us perfect Fawlty. Our hero mistakenly squirts hand sanitiser metres into the sky out of sexual nervousness. A guru minces around with a comedy bulge — and Luciana, mid yoga pose (legs behind ears, gusset bursting) utters the line: ‘First he praised my beauty, then my speech.’ The old ones really are the best.

Rowan Polonski and Hedydd Dylan steal the night as Antipholus of Ephesus and his manic, pregnant wife Adrianna.

When Antipholus of Syracuse (the other twin, played by Guy Lewis) doesn’t recognise her, Dylan whips into a most entertaining fury, bouncing around in heels, clutching her bump in full ‘make-a-scene’ mode.

Polonski gets his moment, too: a crowd-pleasingly wild breakdown, after the weight of the mix-up has left him muddied and bloodied.

The two servants don’t quite match up. Jonathan Broadbent (Dromio of Syracuse) has the smarter comedy chops, even turning one speech about an obese wannabe lover into a stand-up pastiche, toying with his microphone stand and winking at the crowd: ‘She is spherical… I could find countries in her.’ Netherlands? ‘I did not look so low.’ The other Dromio (Greg Haiste) is too clownish, with gurns and children’s TV intonation from a lesser production.

Tying the whole affair together is a glorious band. Well, I say band. It is four musicians somehow producing sounds of funky disco, brass and guitar using nothing but mouths and microphones.

For a balmy, luscious Warwickshire evening it was all pitched just right. Classic RSC quality, welcoming us back to close quarters with fellow theatre-lovers again: a merry example of what we’ve all missed, why we love it and why it matters.

A tale of woe spelled out in capitals

Romeo and Juliet can be a theatrical graveyard. It’s particularly vulnerable to directors who have important stuff to say. That is, sadly, the case in Ola Ince’s take on the play at Shakespeare’s Globe (HHHII), which seeks to turn the romance into a sociology lesson.

A digital screen at the back of the austere council estate set starts each sequence with a socio-political bullet point. Following the opening affray, we are told in block capitals ‘RATHER THAN UNDERSTAND THE VIOLENCE, THE PRINCE THREATENS HIS COMMUNITY’. Followed by ‘THE RATIONAL PART OF THE BRAIN IS NOT FULLY DEVELOPED UNTIL 25’. Sometimes, alas, not even then.

Mercifully, in Alfred Enoch, we have a bright, chatty Romeo. And Rebekah Murrell (pictured) makes a genuinely sparky Juliet.

Both could do with being a little less knowing, but Ince’s purpose is clearly to demonstrate that if only they’d kept their feet on the ground, and enjoyed ‘A SECURE ATTACHMENT TO A GUARDIAN’, they might have grown up and had kids.