The series, which showcases the country’s most sensational drag queens, sees actress Elizabeth, 55, join RuPaul, Michelle Visage, Graham Norton, and Alan Carr on the judging panel as the queens serve their first looks.

Liz said: ‘My whole family is obsessed with the show and would have disowned me if I hadn’t said yes to being a judge. I am in awe of Ru Paul and couldn’t take my eyes off him.

Speaking of her time as a judge, she said: ‘I like the ladies to look magnificent and make me laugh, so anyone who achieved that got my vote.’

Actress and Drag Race superfan Sheridan, 39, will join the panel for the music and dance week, while Lorraine, 61, returns to the panel for a fun TV segment challenge.

Cilla actress Sheridan said: ‘That was amazing! I am such a superfan! I’m shaking! Ru was sat next to me! And Michelle Visage! And Alan Carr! It’s been amazing. The queens are fabulous. I had the best day. I felt like I’d won a competition. 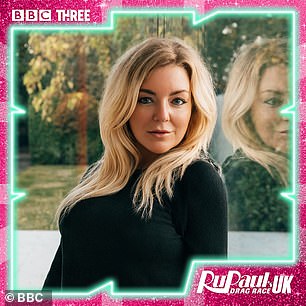 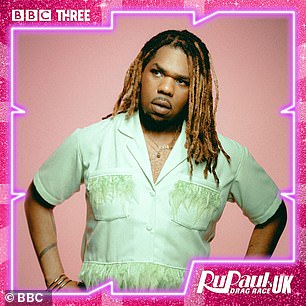 The star, who welcomed son Billy in May,  added that viewers  should look out for her ‘fangirling and my massive pregnant belly!’

Finally, supermodel Jourdan, 30, will impart her knowledge of the catwalk as she helps the Queens work the runway. 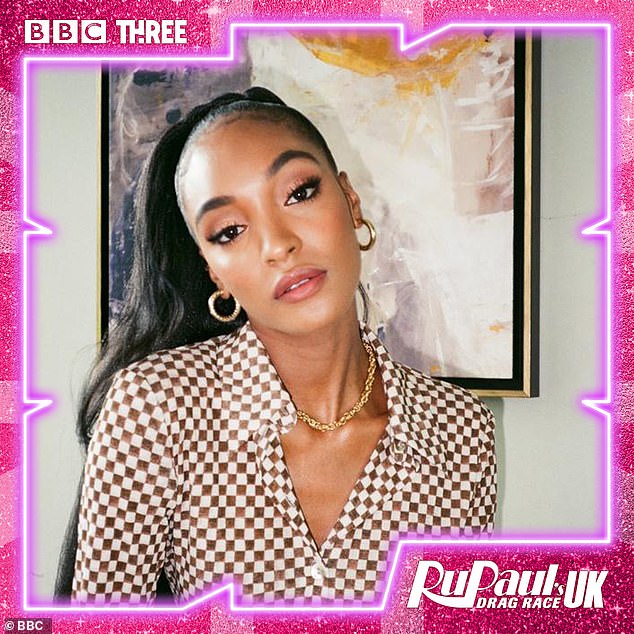 Here she is: Supermodel Jourdan Dunn, 30, will impart her knowledge of the catwalk as she helps the Queens work the runway 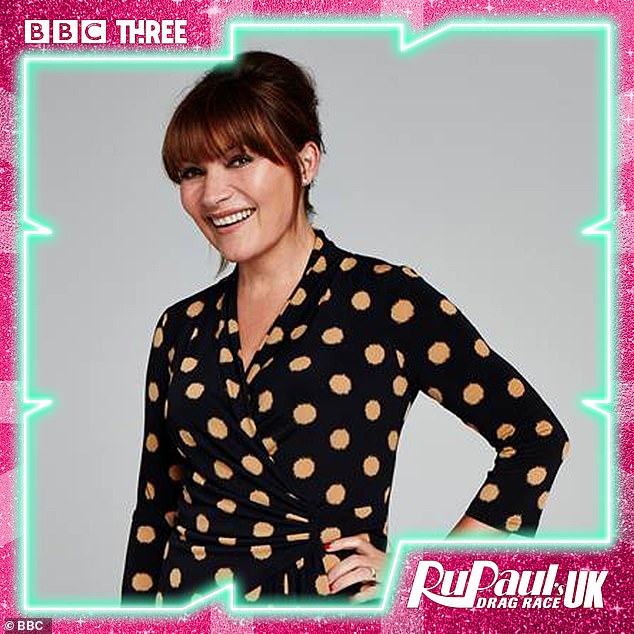 Fashion powerhouse Jourdan Dunn lends her catwalk expertise to the queens of series two, imparting the knowledge she’s gained from decades in the industry, as the Queens werk the runway.

The line-up for the second series of RuPaul’s Drag Race UK was unveiled earlier this week.

In a tweet shared on Monday, BBC confirmed the popular show, which sees judges RuPaul, Michelle Visage, Graham Norton and Alan Carr crown one contestant a UK Drag Race Superstar, will start from January 14 at 7PM, available to watch on iPlayer. 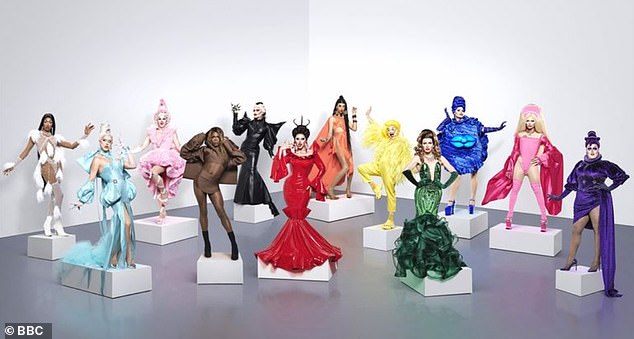 This upcoming edition will see the queens compete in weekly challenges, where their lip syncing, fashion sense, sewing, humour, singing, make-up, acting and dancing will be put to the test for ten weeks.

Following the franchise’s mantra, the group will be assessed on their Charisma, Uniqueness, Nerve and Talent, before the bottom two queens will be asked to lip sync to save their position in the competition.

RuPaul, 60, and Michelle, 52, will be joined by comedians Alan, 44, or Graham, 57, on a rotational basis, while an extra special celebrity guest judge will sit on the panel each week. 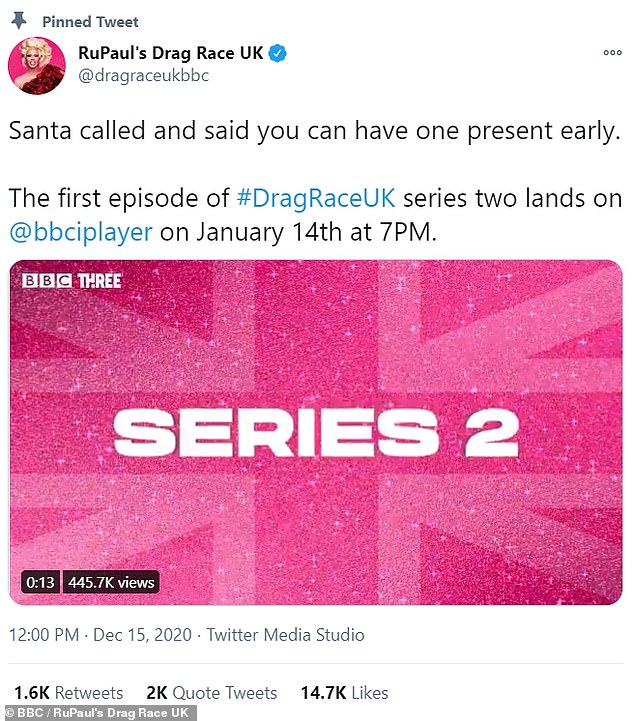 ‘Santa called and said you can have one present early!’ In a tweet shared on Monday, BBC confirmed the popular show will start from January 14 at 7PM, available to watch on iPlayer 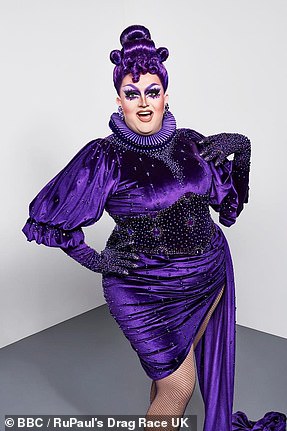 Who are you? I’m from Glasgow and every single stereotype that you are thinking right now about a Scottish person is, is true for me! I love Irn-Bru, and a caramel wafer. I’m almost the Austin Powers ‘fat bastard’ of drag! I think of my Scottishness as an asset. I am definitely very proud to be Scottish and Glaswegian. 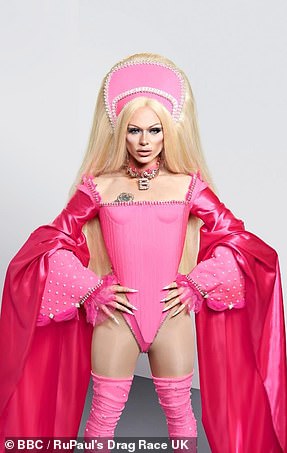 Who are you? I have a degree in journalism, and I have done a lot of social activism, which is something I’d like to pursue further. I invented veganism about seven years ago…haha! No, I’ve been vegan for about seven years. I love yoga, and I’ve never been healthier. 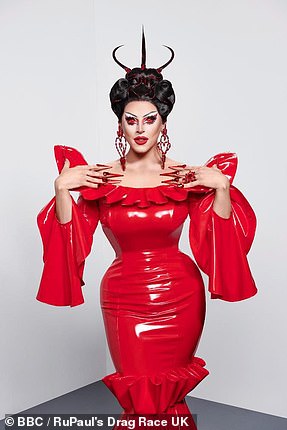 Who are you? Cherry Valentine is everything. She is glamour, she is a club kid, she’s dark, she’s gothic, she’s a dancer, she’s flippy. Look at me, I am a queen. 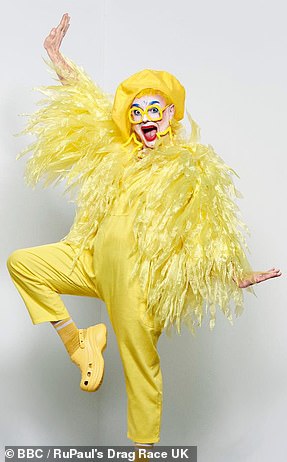 Who are you?  I’m basically a drag troll. I’m the hairiest woman in show-business! I’m the only nonbinary drag queen in the UK…with a sense of humour! I don’t do traditional drag; I am a character. My look is a 90’s daytime TV presenter. I wear my face which suits me. For me, it’s not about makeup. It’s all about the performance. 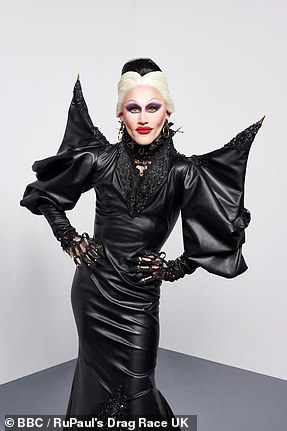 Who are you? I come from the world of cabaret so it’s all ostrich feathers, glitter and burlesque. What a lovely place to come from. Oh, and I am the first person from Drag Race to hail from Brighton. 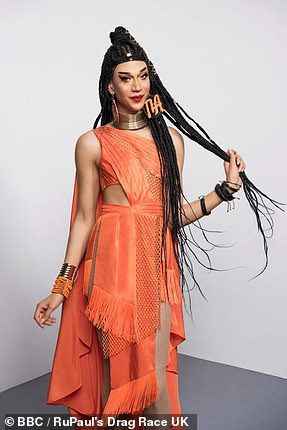 Location: London (via Essex and Nottingham)

Who are you? Originally from Essex, I am now the queen of Clapham. My name, Tia Kofi is a very camp and very British – Tea or Coffee darling? It’s very me, and at the very least, it’s memorable! I’m a mashup of the drag styles. I love comedy, camp, old school, contemporary, and cultural references. As there aren’t a huge number of POC queens on the scene, I’ll often throw in something from my Nigerian heritage too. I’m also a geek. One day I might be a character from Dr Who, and I love channelling a bit of Star Trek. My drag is a melting pot! 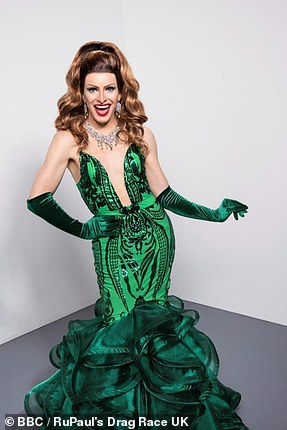 Who are you? When I was a little boy, my brother and I used to make our own comic books, and when our baby sister, Veronica, came along we were so jealous that we created a supervillain in our comic books and called her Veronica Green! Unwittingly, my sister’s birth sparked off my drag persona! She’s going to be mortified at all of this – I stole her prom dress and everything. 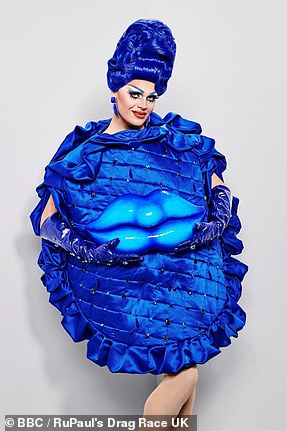 Who are you? I’m from Liverpool where the drag scene is incredibly varied. We have the grand high mistress, Lily Savage, who paved the way for drag queens everywhere, God bless her! You have the gorgeous queens of drag town, like angels from a high, then you have the grungy queer scene who like to get down dark and dirty, and throw condiments, and then you have me! I think I fit in to the middle of lots of different worlds. I’ve always had a strong aesthetic and I’ve always had a strong sense of what I think is funny and when you put those things together: it looks, and sounds like me. 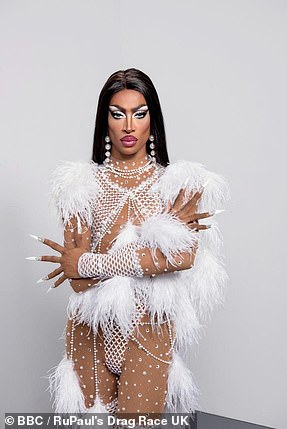 Who are you? I’m from the Welsh lands of Newport. Newport can be a bit grey, dingy and so I just love to bring a bit of colour to the world. Since I was born, I have been prancing around in little skirts and wigs. I’ve always been full of life and energy. I’ve always got a smile on my face and I have been wearing crazy looks from day dot. 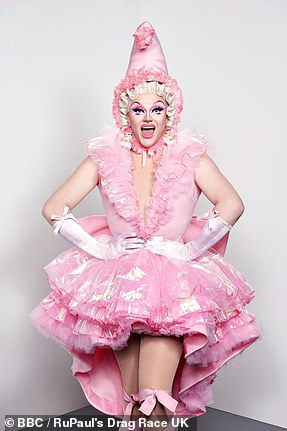 Who are you? I’m 6ft 4 out of heels, and in drag, I love to go even taller. I like the biggest wigs, heels, outfits, lashes, makeup and ass. I would describe my drag as a cartoon character that has come to life. If you were to search online for a photo of drag queen, then a picture of me would come up. 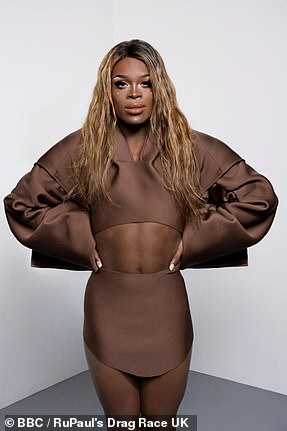 Who are you? I am known for giving very extravagant MTV style performances. I have up to twelve dancers with a big concept show. There are lights, and pyrotechnics and extravagance. It’s very interactive, sometimes with a bit of comedy. I have been dancing since I was tiny, and I have been dancing professionally since I was 20 years old. I am trained in ballet, tap, contemporary, Latin, hip hop, funk and street and it’s all in my show. I have worked with Little Mix, Pussycat Dolls, Melanie C, Sophie Ellis-Bextor, Fleur East, Kayne West at the Brits. Now it’s my time to be on the poster and get the headlines. I can’t wait. 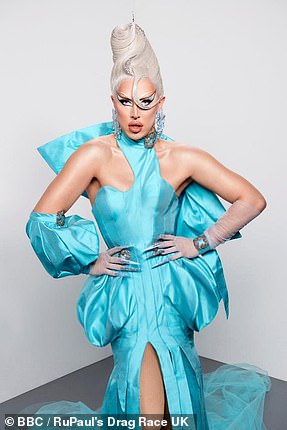 Who are you? I’m from Nottinghamshire originally. I now live and work in London, but I’m still Northern as Hell. I’m a fashion designer and A’Whora is my muse, best friend and alter ego. She is well known as a fashion queen, but I’m here to prove she’s so much more than that. She is different to anyone you will ever meet. She is striking, she has presence, and you will never see her in a High Street dress. I’m gagging at the thought! 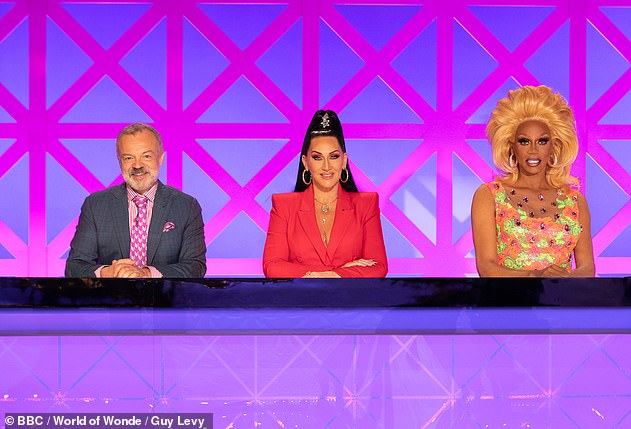 They’re back! The series will see judges RuPaul, Michelle Visage, Graham Norton (pictured together in 2019) and Alan Carr crown one contestant a UK Drag Race Superstar

Last month, it was announced that the show has also been renewed for a third season.

‘We’re also currently casting season three with the best and the brightest Great Britain has to offer.

‘We feel honoured that you’ve embraced our little show, and our only wish is that we can offer a smile at a time when we can all use it the most.’

The first series saw 10 contestants put through their paces as they took part in weekly challenges in the bid of earning a RuPeter badge and showing the best of British drag. With the bottom two contestants fighting for their spot in a lip sync battle. 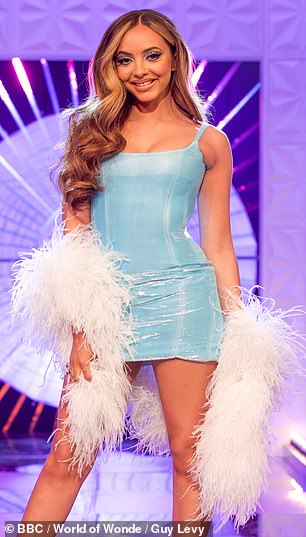 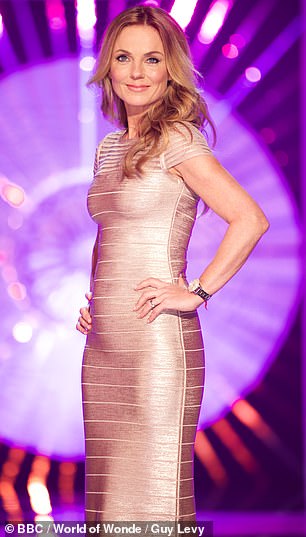 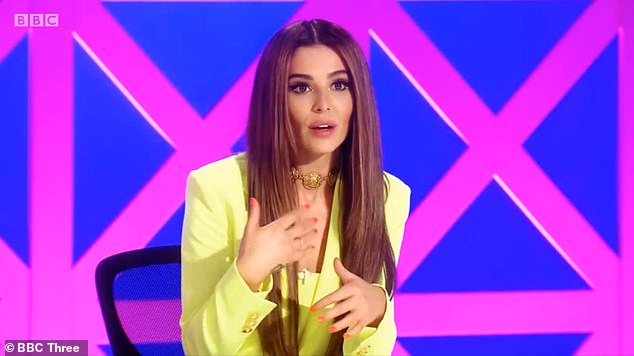 The Vivienne was crowned the first-ever UK Drag Race Superstar with Divina De Campo and Baga Chipz as runner-ups.

While the popular series has had an impressive 15.6 million requests on iPlayer so far. 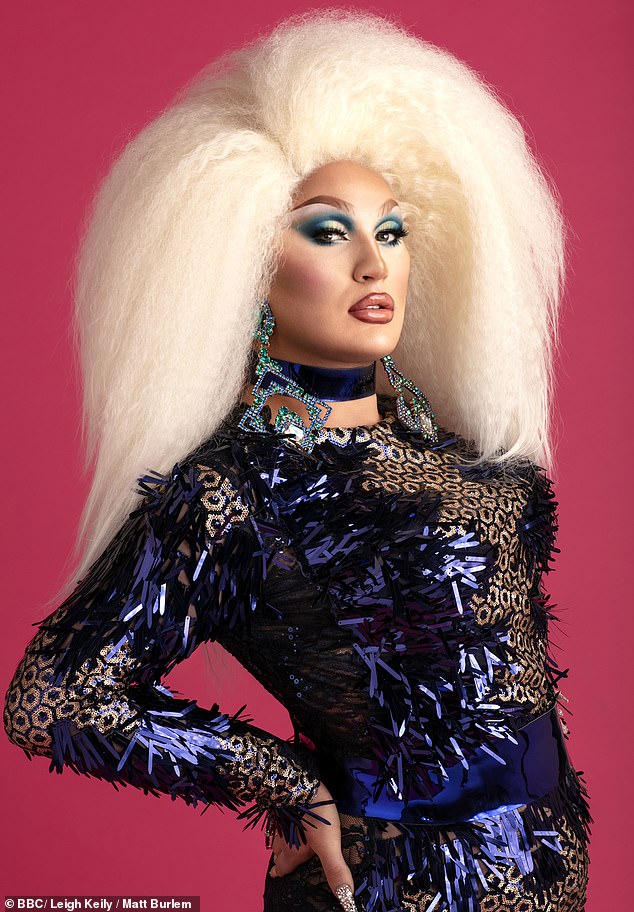