Rush-hour traffic in London continues to rise with SEVEN per cent more cars on the roads compared to last week despite increase in congestion charge from £11.50 to £15

Traffic congestion in London continued to increase today as coronavirus lockdown restrictions fall, with rush-hour levels up again despite the congestion charge rising.

TomTom traffic data showed a 29 per cent congestion level as of 9am – a rise of 7 per cent or 2 percentage points on the 27 per cent figure at the same time last week.

The 8am figure was 28 per cent, which was the same as last week, while the 7am level was also 28 per cent, above the 27 per cent level at the same time last week.

The rise in traffic will have been boosted by the warmer weather – with Britons still on furlough likely to be making more trips to see family and friends outdoors as temperatures in southern England hit 84F (29C) today and 93F (34C) by Thursday.

Meanwhile Apple mobility data based on requests for directions under its Maps app shows that journeys continue to rise in London as the UK comes out of lockdown.

Requests for driving are down 29 per cent, walking down 57 per cent and public transport down 64 per cent based on a January baseline – but this is much higher than the figures seen in April which got as low as nearly 90 per cent down.

The rise in traffic this week comes despite a 30 per cent rise in London’s congestion charge from £11.50 to £15 and an extension in its hours of operation.

Transport for London said the temporary measures – which both came into force yesterday – were introduced under the terms of its £1.6 billion Government bailout. 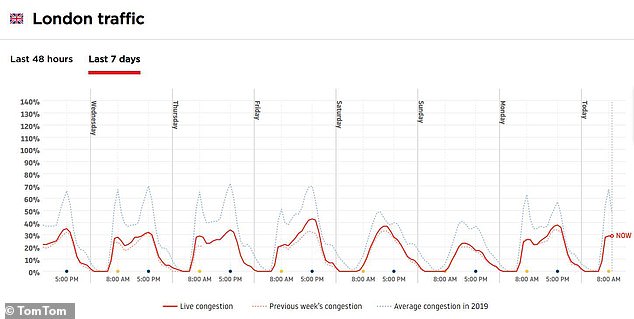 Why was the London congestion charge increased to £15?

The congestion charge – the daily fee for driving a car into central London – rose from £11.50 to £15 yesterday.

Transport for London is concerned about major congestion in the capital, with data showing the number of cars in the zone is already the same as before lockdown started on March 23.

It has therefore increased the charge to discourage people from driving amid fears levels could double if those who would have used public transport get behind the wheel instead.

This would result in insufficient space on the streets for the higher number of people walking and cycling to ensure compliance with social distancing.

TfL says car traffic in the charging zone is already back to pre-coronavirus pandemic levels, and roads will become ‘unusably congested’ if no action is taken as restrictions are eased further.

It believes the changes being made could reduce car trips by a third and encourage more people to make journeys by walking or cycling.

A scheme which reimburses NHS staff making additional journeys in the zone as part of their role in tackling the pandemic is being extended to include more people, such as ambulance workers and care home staff.

TfL’s director of city planning Alex Williams said: ‘It is not sustainable for London’s recovery to be dominated by cars.

‘We are already seeing a surge in traffic and need to act now to stop the city grinding to a halt.’

Traffic levels have increased since non-essential shops were allowed to reopen last Monday, and are set to rise further when the hospitality and tourism industry gets the green light to welcome people back in from July 4.

More commuters heading to work will also increase levels, with public transport usage also expected to rise as large numbers of people take the London Underground or buses to get into the office.

Today, friends and family could be given the green light to meet up indoors for the first time in months as Prime Minister Boris Johnson eases the lockdown.

Cinemas, pubs and hairdressers are set to allowed to reopen in England from July 4 – dubbed ‘Super Saturday’ by some MPs – in a dramatic effort to get the country up and running again. 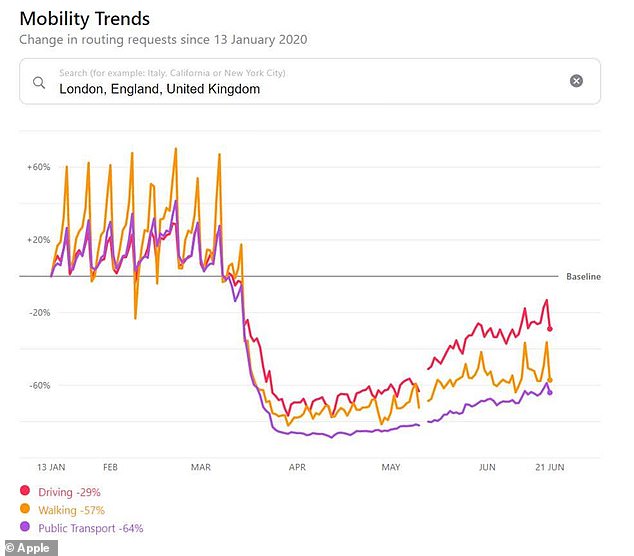 Apple mobility data based on requests for directions under its Maps app shows that journeys continue to rise in London. Requests for driving are down 29 per cent, walking down 57 per cent and public transport down 64 per cent based on a January baseline figure

Throwing the dice with the economy threatening to go into meltdown, the Prime Minister will halve the two-metre social distancing rule crippling thousands of businesses and announce a return for staycations.

There is also speculation that people will be permitted to meet up in each other’s homes, although it is understood the proposal will not be the same as Northern Ireland where up to six people can gather indoors from today.

It is not clear whether the blueprint – being signed off by the Cabinet this morning before Mr Johnson makes a statement to the Commons later – will mean children can hug their grandparents yet. Reports suggest a mooted expansion of social ‘bubbles’, which would allow people to mix freely in groups, might have been dropped.

In a sign of the risks involved, Mr Johnson will warn that the changes will be reversed immediately if people abuse the new rules and the disease flares up again.