Russia has threatened to search British plane in retaliation to UK Border Force officers boarding an Aerflot flight at Heathrow.

The country’s Ministry of Transport today said Moscow would demand an official explanation from Britain for why the plane was searched yesterday.

The ministry said: ‘If there is no explanation, the Russian side will deem the actions towards our plane as illegal and also reserve the right to take similar action against British airlines.’

An embassy official had earlier suggested that the jet, which had arrived from Moscow on a scheduled return trip, had been searched in connection with the diplomatic crisis over the Salisbury spy poisoning.

An embassy official suggested that the jet, which had arrived from Moscow on a scheduled return trip, had been searched in connection with the diplomatic crisis over the Salisbury spy poisoning 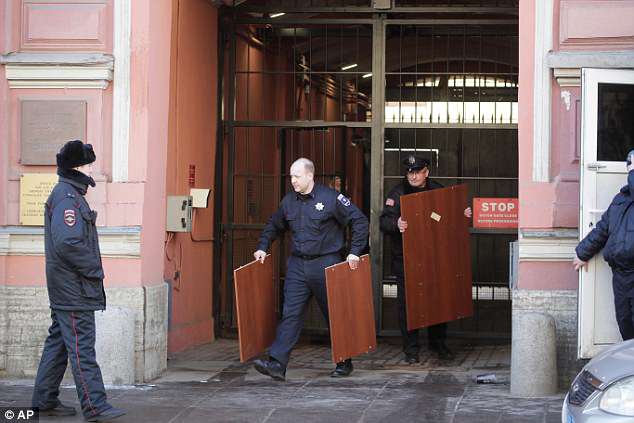 Security personnel carry pieces of furniture out of the US consulate in St Petersburg, Russia 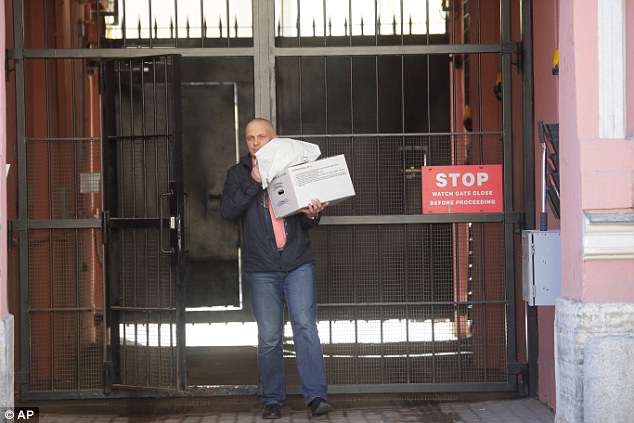 Sergei Skripal (left) remains in a critical condition after the attack in Salisbury on March 4. and The condition of his daughter Yulia (right) is said to have improved

The row intensified on Friday after the Kremlin ordered Britain to reduce the number of diplomats in Moscow down to the same amount that Russia has in London.

It came as ambassadors from more than 20 countries were called into the foreign ministry in Moscow to be told of the latest wave of retaliatory measures being imposed.

As the crisis notched up the Russian embassy in London said British officials had searched an Aeroflot jet that had landed at Heathrow from Moscow.

According to an embassy officer Border Force and customs officers at first tried to search the plane without the crew, although the captain was eventually allowed to be present.

‘Today, we have witnessed another blatant provocation by the British authorities,’ the official said. 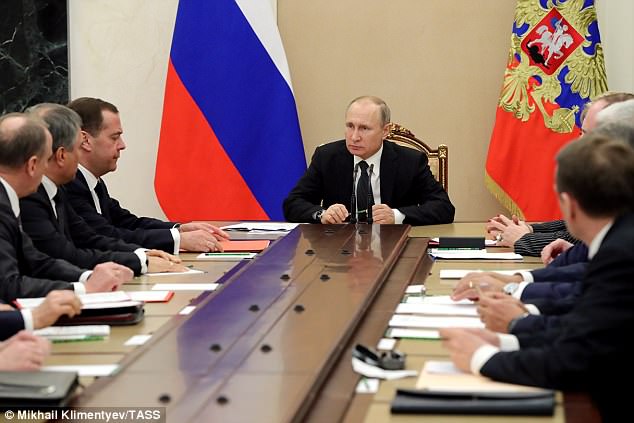 Russia’s President Vladimir Putin (centre), and Prime Minister Dmitry Medvedev (third left) at a meeting of the Security Council of Russia in the Kremlin

‘Border Force and Customs officers have searched the aircraft that was conducting the Aeroflot flights 2582 / 2583, Moscow – London – Moscow. This kind of event is extraordinary.’

The British government did not immediately comment on the embassy’s complaint.

The Metropolitan Police, which is coordinating the investigation into the poisoning of Sergei Skripal and his daughter Yulia, denied it was part of the search.

The Russian embassy said it had complained to British counterparts and called for an explanation.

‘At this moment, we have no other explanation but that the incident at Heathrow is in one way or another connected with the hostile policy that the UK government is conducting with regard to Russia,’ the official said.

The UK expelled 23 Russian diplomats in the wake of the poisoning of Mr Skripal, 66, and his daughter Yulia with the nerve agent Novichok. 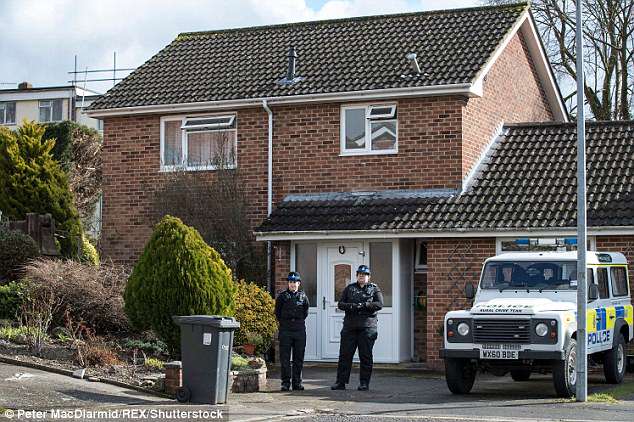 Police outside the house of poisoned Russian spy Sergei Skripal, who is in a critical condition at hospital after being exposed to a nerve agent with his daughter

Laurie Bristow, the UK ambassador in Moscow, was among those called into the foreign ministry in Moscow on Friday.

He told reporters: ‘It is important to bear in mind why this crisis has arisen in the first place.

‘It’s the use of a chemical weapon on the streets of the United Kingdom that has threatened the lives of a number of people in my country.

‘We asked certain questions of the Russian state and have still not received adequate answers.’ 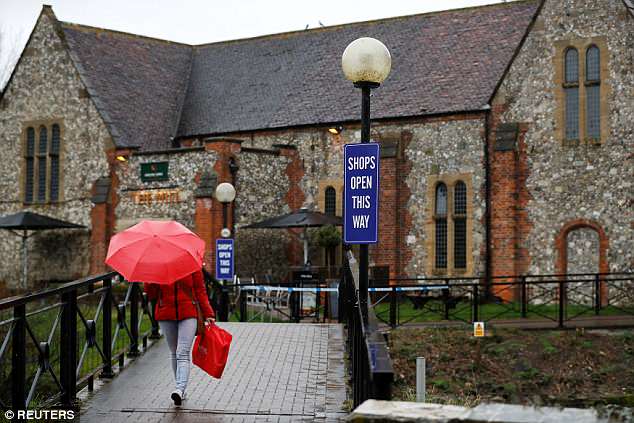 Russia has told a number of countries – including Ireland, Germany, Italy, France, Spain, Finland, Poland, the Czech Republic, the Netherlands, Norway and Australia – they must send home the same number of diplomats as they had ordered to leave their nations.

So far, more than 150 Russian diplomats, some of whom are suspected spies, have been told to return home by the UK’s allies.

The Russian Embassy said on Friday it ‘insists’ on the right to see Ms Skripal, 33, after it emerged on Thursday she was improving rapidly.

She spent three weeks in a critical condition after being exposed to Novichok on March 4.

Ms Skripal’s father remains in a critical but stable condition in hospital.

On Friday afternoon, the Russian Embassy published a list of 27 questions it claimed it had for the British authorities over the treatment of the Skripals.

The list included demands to know the exact nature of their condition and how they were being treated, and whether British doctors’ approach ‘helped or harmed’ the Skripals.

It also claimed Mr Skripal’s niece had been inquiring after her uncle’s health but that she had been ignored by the Foreign Office, and wondered why no images or footage of the Skripals alive in hospital had been published. 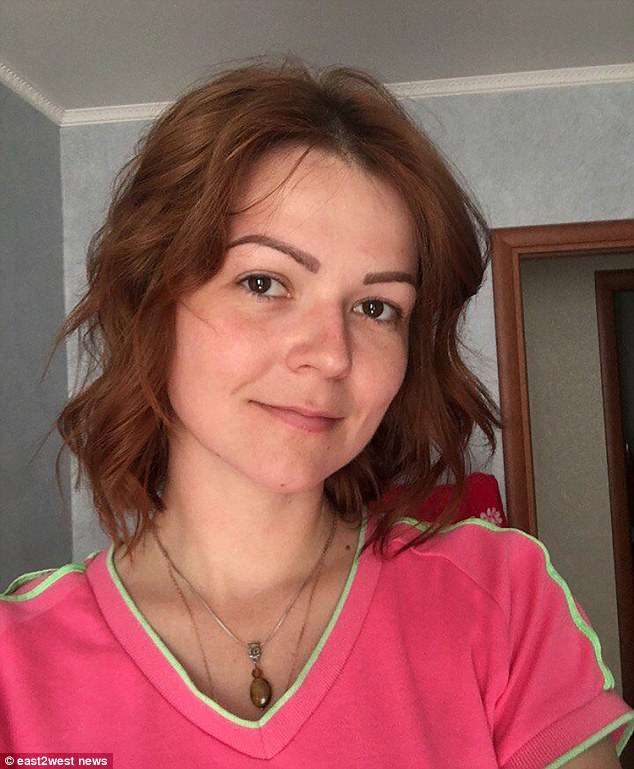 Scotland Yard believes Mr Skripal and his daughter, who was visiting him from Russia, first came into contact with the deadly chemical at his home.

Detailed forensic testing revealed the highest concentration of Novichok was found on the front door.

The vast attempted murder investigation continues to unfold in the Wiltshire city, most recently leading police to cordon off a children’s play area at Montgomery Gardens.

Detectives said traces of the nerve agent had been found at some of the other scenes where investigations had been carried out, but at lower concentrations.

Efforts will now focus in and around the address, and specialist teams will step back from some of the other areas investigated over the past few weeks.

Mr Skripal and his daughter have been patients at Salisbury District Hospital since they were discovered unconscious on a park bench close to The Maltings shopping centre nearly four weeks ago.

Wiltshire Police Detective Sergeant Nick Bailey, who was also exposed to the nerve agent, was discharged from the hospital last week.