Russia’s cutting edge military hardware including a drone shaped like an owl, nuclear weapons, and unmanned tanks has gone on show at its annual military exhibition.

The International Military Technical Forum will present foreign commanders and members of the public with 27,000 different weapons and vehicles.

The show, held at Patriot Park on the outskirts of Moscow, boasts a 500,000 metre squared outdoor exhibition area and its website claims there will be more than 1,250 Russian and foreign exhibitors.

Russian defence minister Sergey Shoygu said in a statement: ‘Being one of the world’s biggest and most prestigious exhibitions of armaments and military hardware, the Forum has a crucial role in bringing civilians and armed forces together, enhance the authority of the Armed Forces, and cultivating a sense of national pride amongst the young generation…

‘Without a doubt, innovative developments presented by both domestic and international enterprises will attract great interest of experts and guests of the exhibition. Moreover, all the attendees will find an exhibition devoted to the Russian force grouping in the Syrian Arab Republic most interesting.’

As well as displays for various categories including drones, robotics and nuclear weapons, famed Russian aerobatics teams will be on show.

The colossal exhibition which began today will also feature naval and land vehicle displays and runs through to the end of this month. 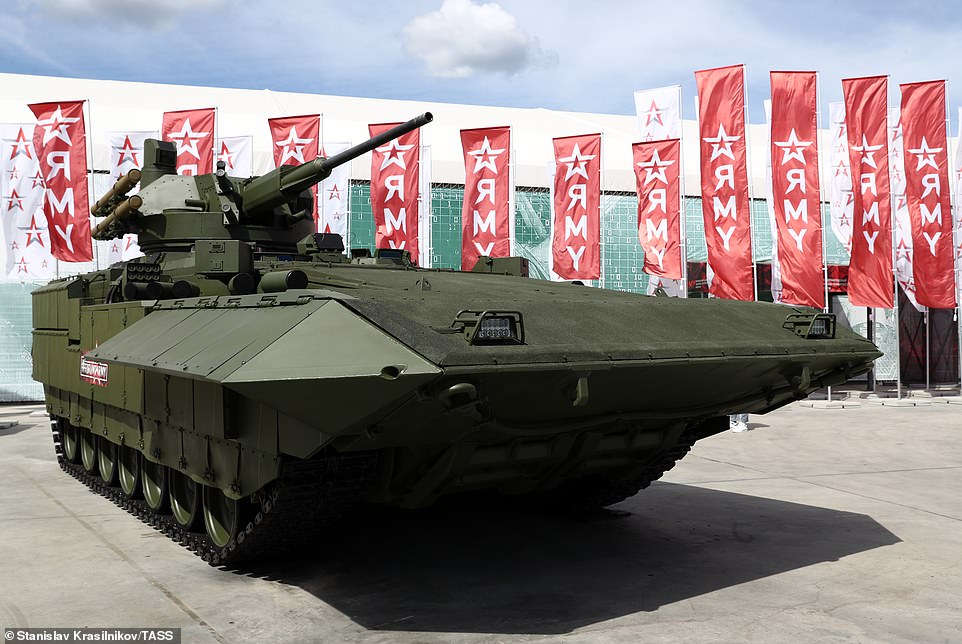 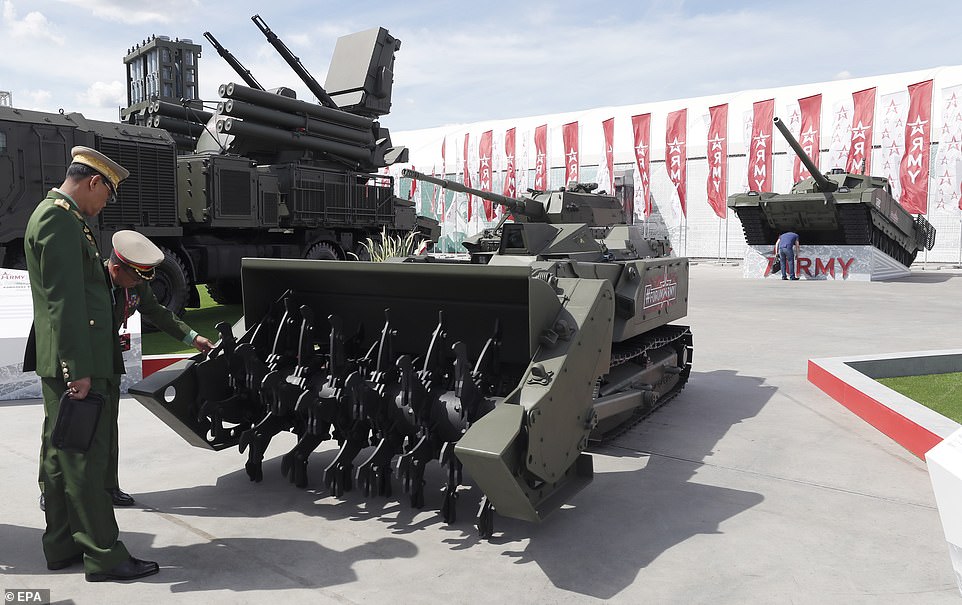 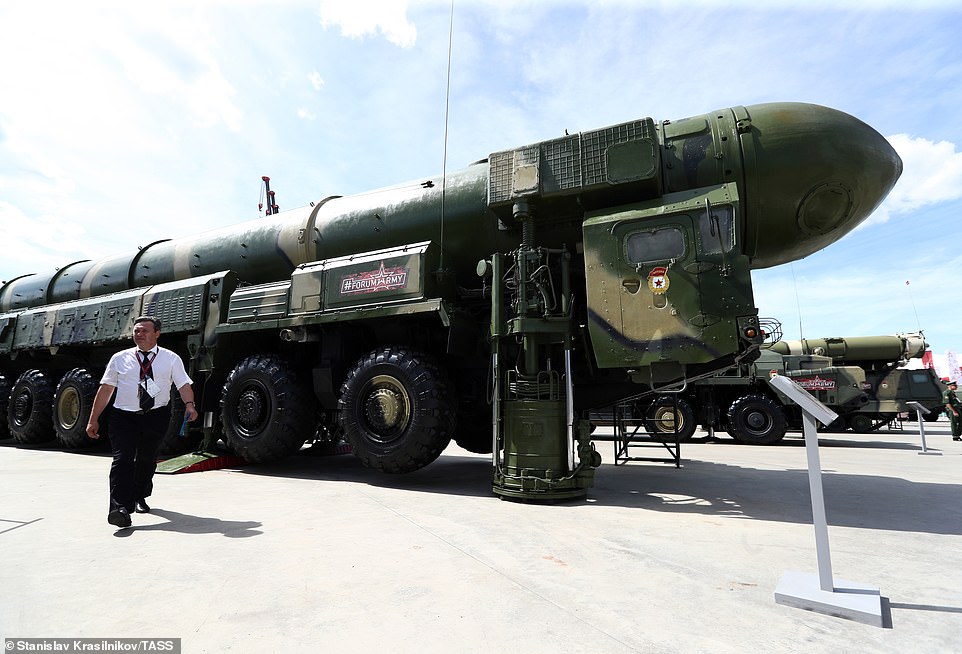 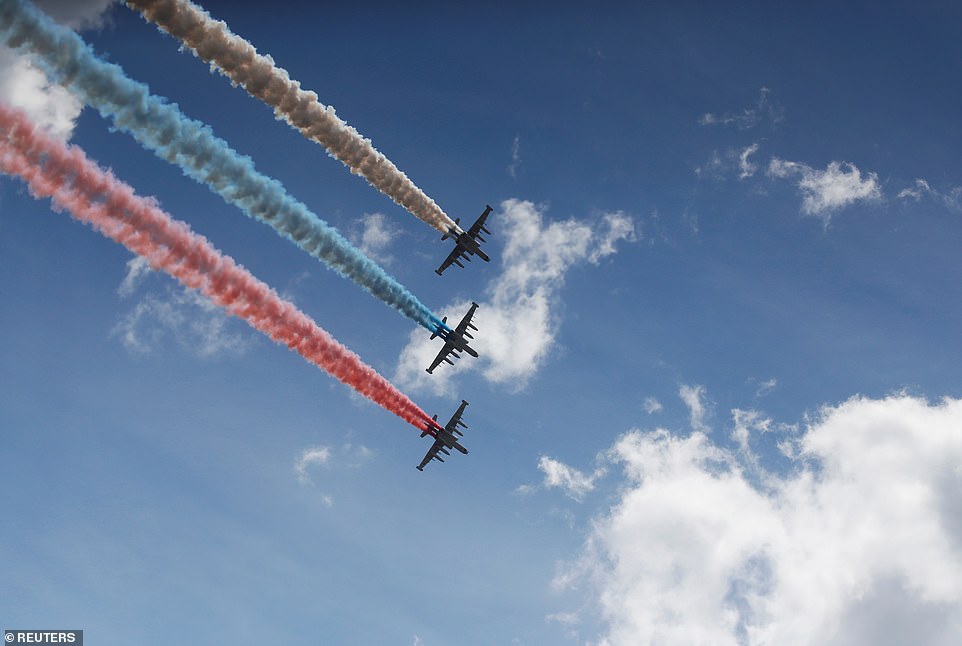 Su-25 jet fighters release smoke in the colours of the Russian state flag during the opening ceremony on Tuesday – the conference website says ‘the legendary Russian aerobatic teams: The Swifts, The Russian Knights and The Golden Eagles’ will be on display during the week 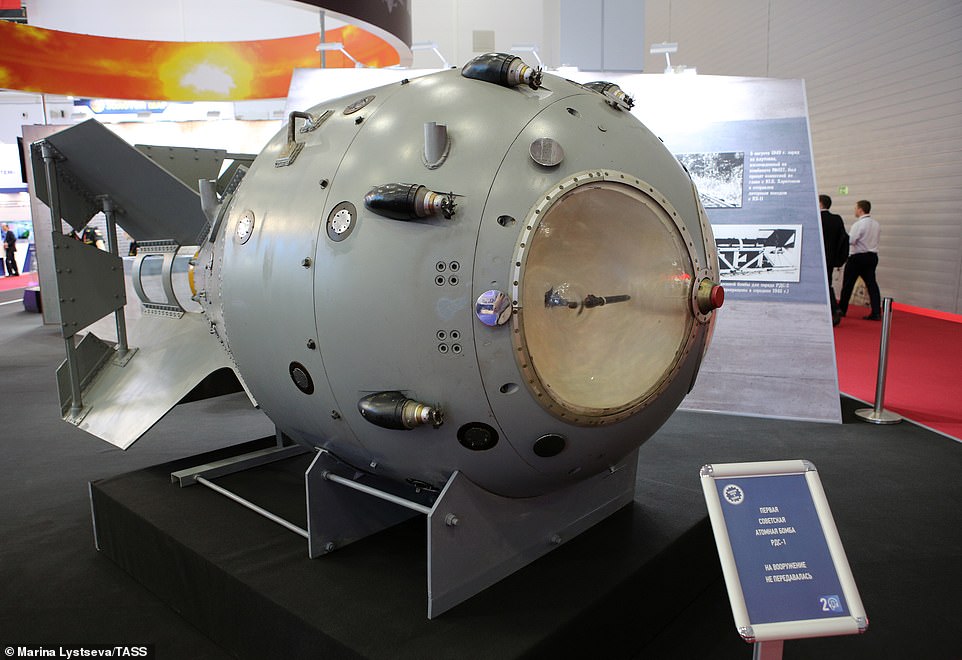 The RDS-1, the first Soviet-made nuclear bomb, on display – the United States nicknamed it the Joe-1, a reference to the communist tyrant Joseph Stalin. It was first tested in 1949 in the Kazakh region during Soviet times following a top secret development project 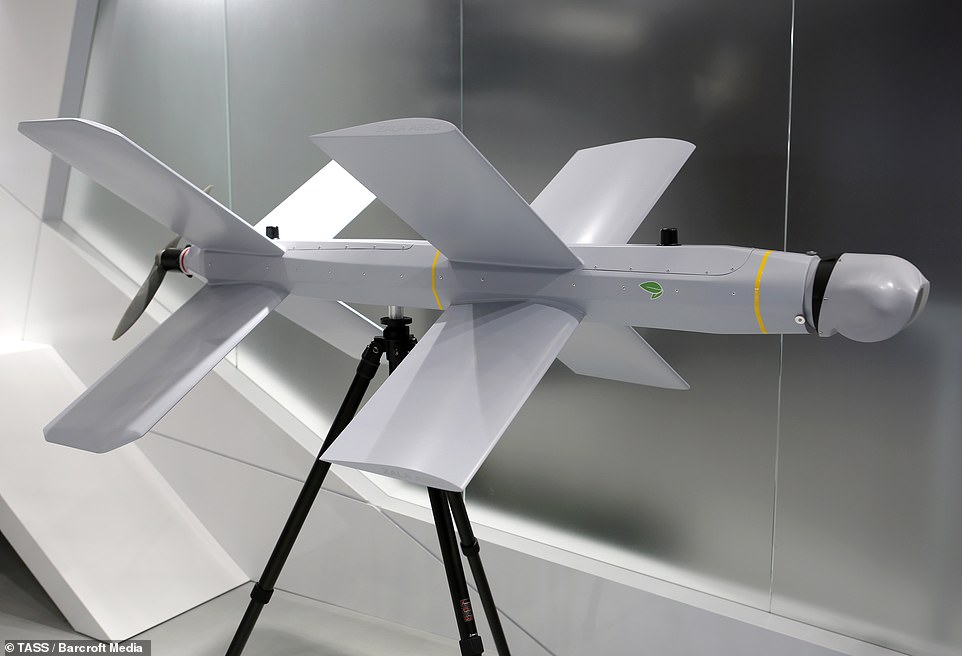 A ZALA Lancet attack drone developed by Kalashnikov Concern on display, as well as providing live video reconnaissance the drone is designed for precision strikes with a maximum range of 25 miles – the exhibition boasts a 500,000 metre squared outdoor area and its website says there will be more than 1,250 Russian and foreign exhibitors 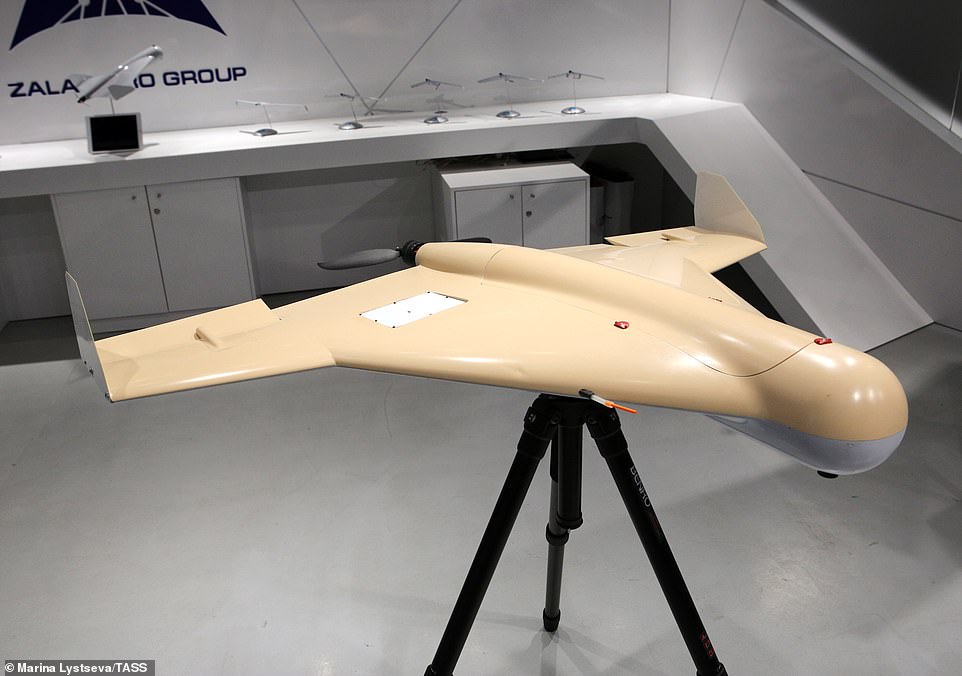 A ZALA-KYB attack drone developed by Kalashnikov Concern on display, it can fly at speeds of 80mph and delivers a payload of up to 7lbs worth of explosives 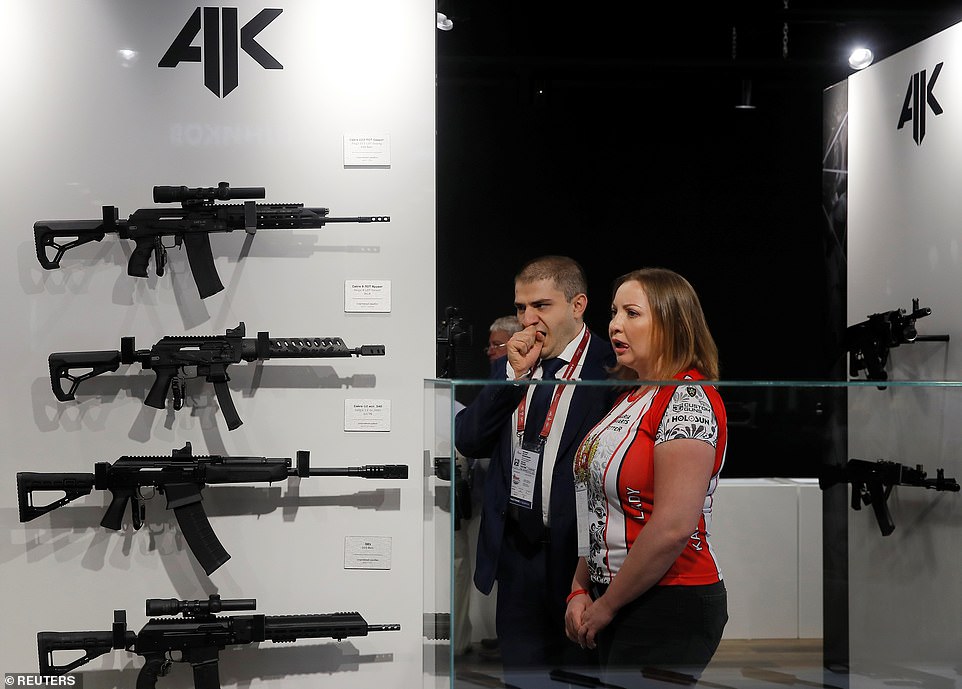 The Kalashnikov Group’s display of various assault and tactical rifles at the centre near Moscow – the company supplies the vast majority of all Russian firearms and boasts the Kalashnikov assault rifles, RPK light machine guns and the Dragunov sniper rifle 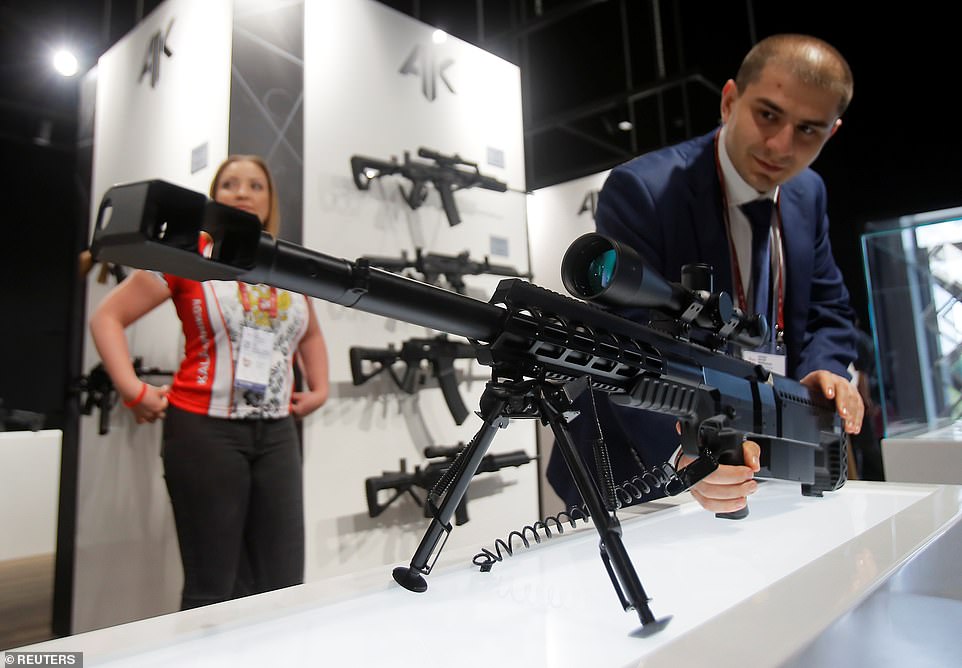 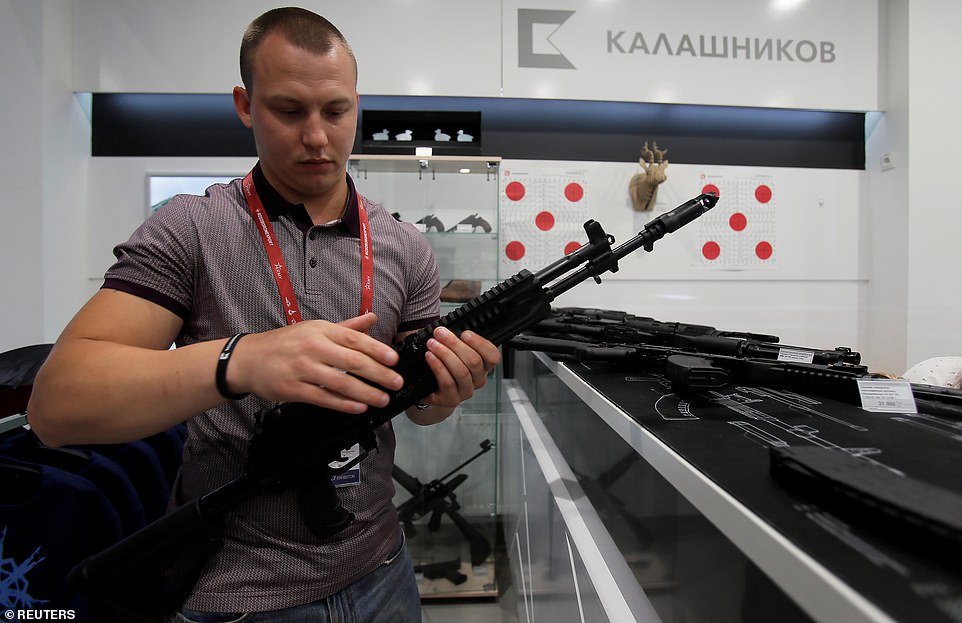 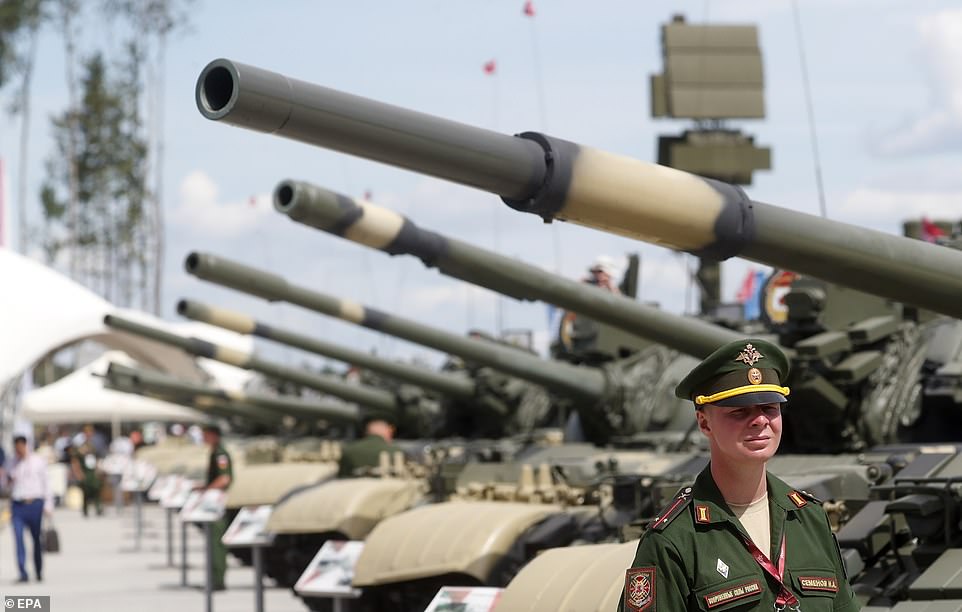 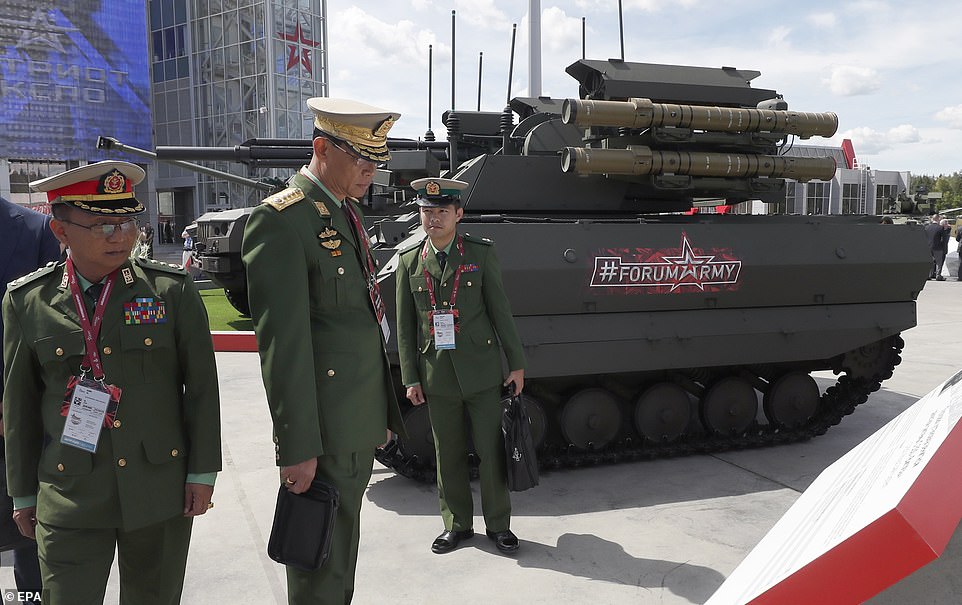 Foreign military visitors inspect tanks on display – as well as members of the public of all ages, there are days on which only a professional audience are invited, including foreign delegates 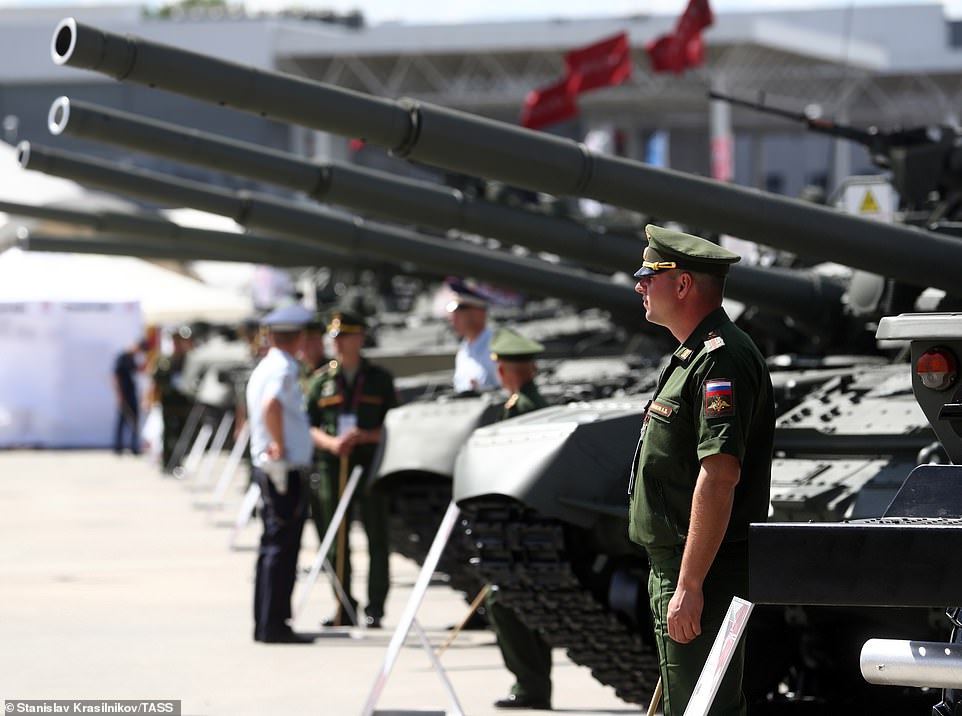 Russian servicemen stand before tank displays on the first day of the annual military show to which foreign delegates are invited by the state – not only is it used to advertise Russia’s arms for sale, it is also a propaganda tool to display cutting-edge military technology to the general populace 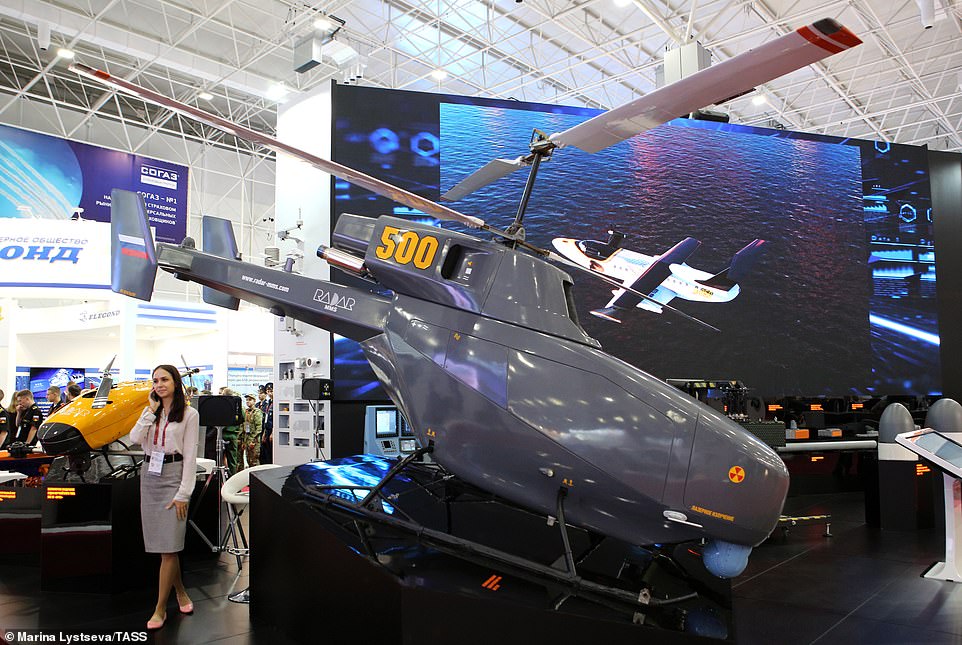 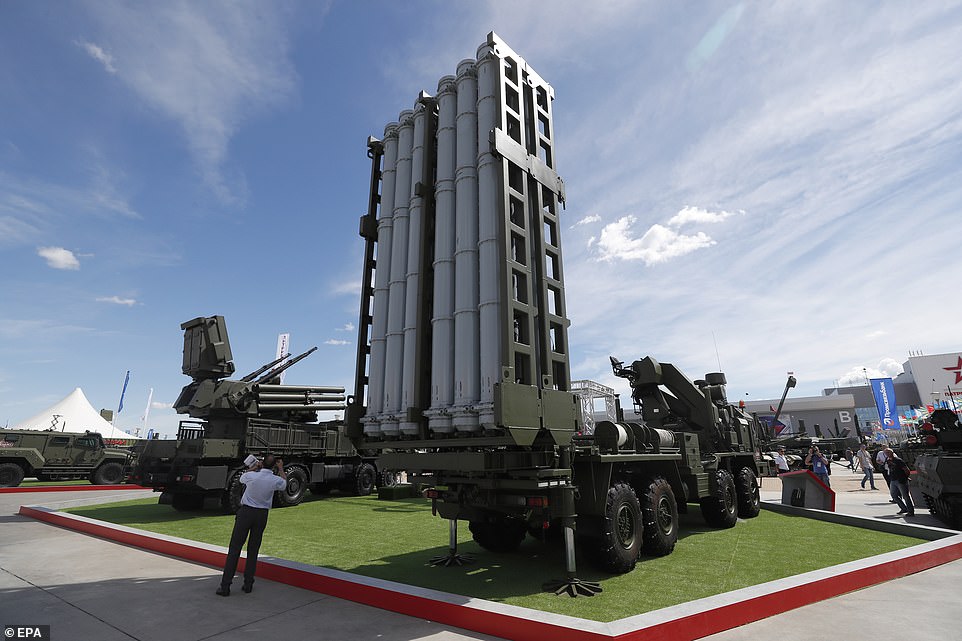 A visitor stands next to the S-350 Vityaz SAM anti-aircraft missile system – it was first deployed in the Hama province of Syria, according to the FARS news agency, to help guard President Bashar al-Assad’s airspace. The Russian defence minister said there will be ‘an exhibition devoted to the Russian force grouping in the Syrian Arab Republic’ 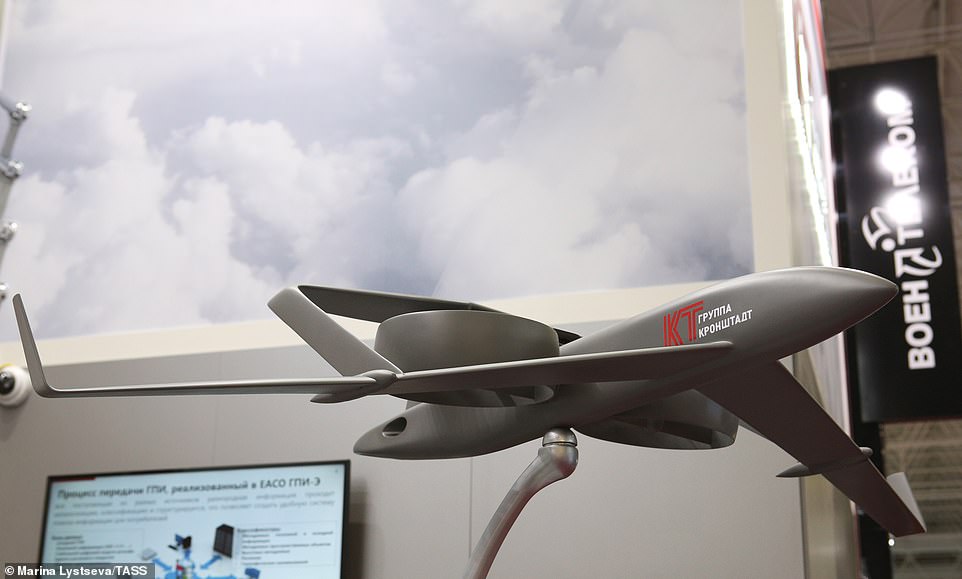 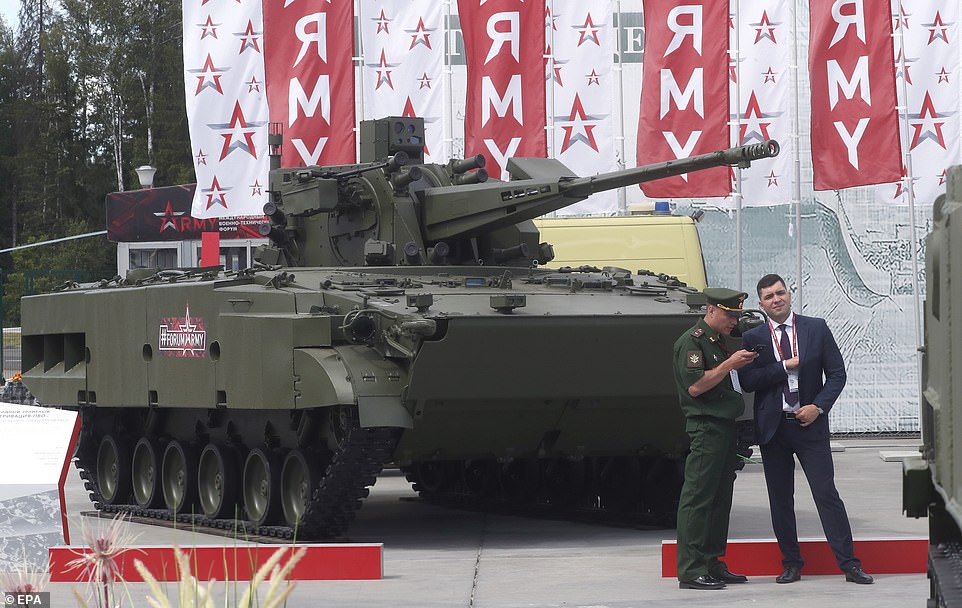 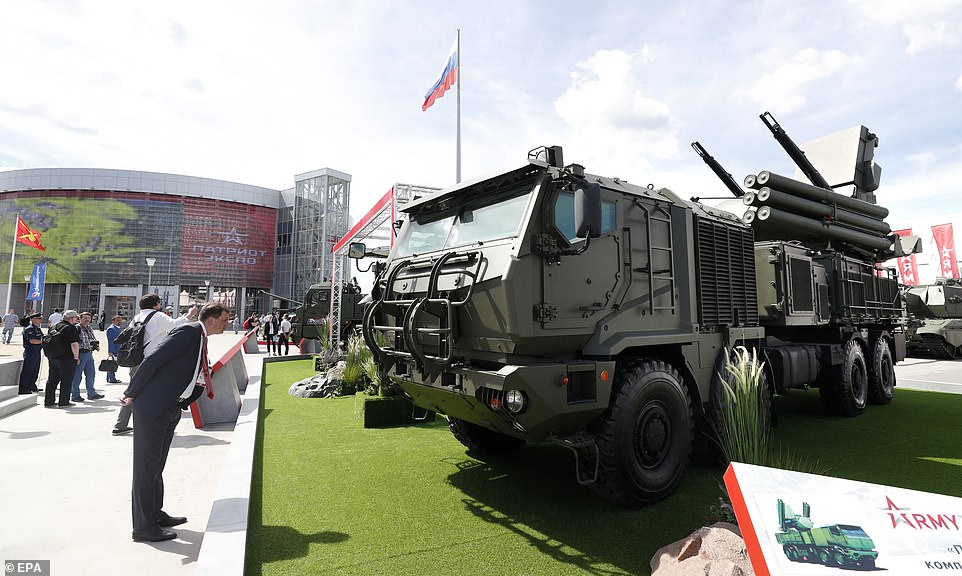 A visitor inspects the front of Pantsir-SM surface to air missile and anti aircraft artillery system – termed the SA-22 Greyhound by NATO, it is the latest in Russia’s vast arsenal designed to deal with airborne targets 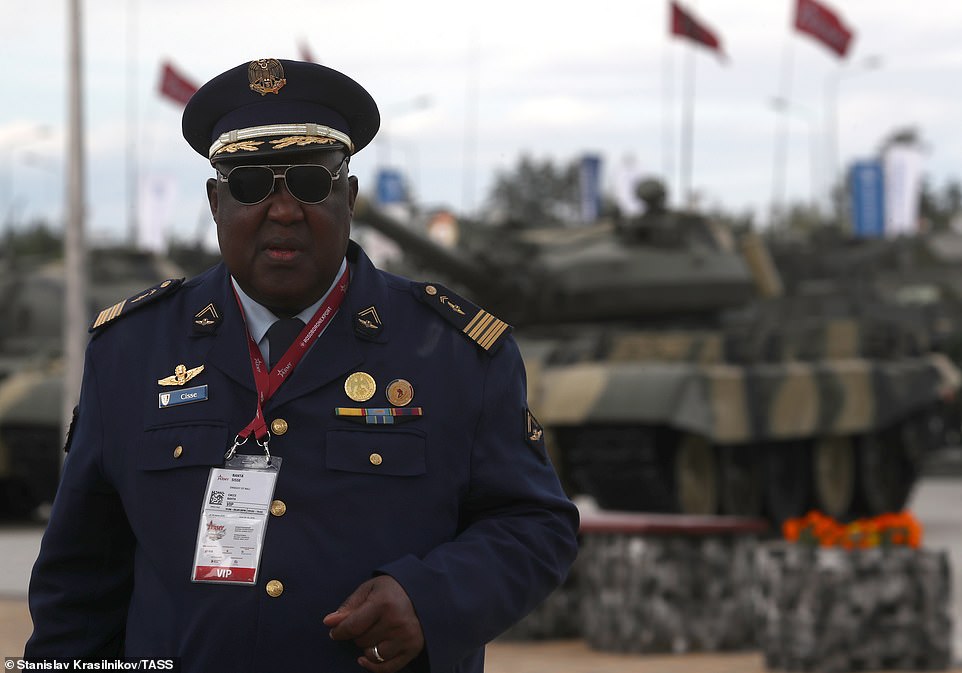 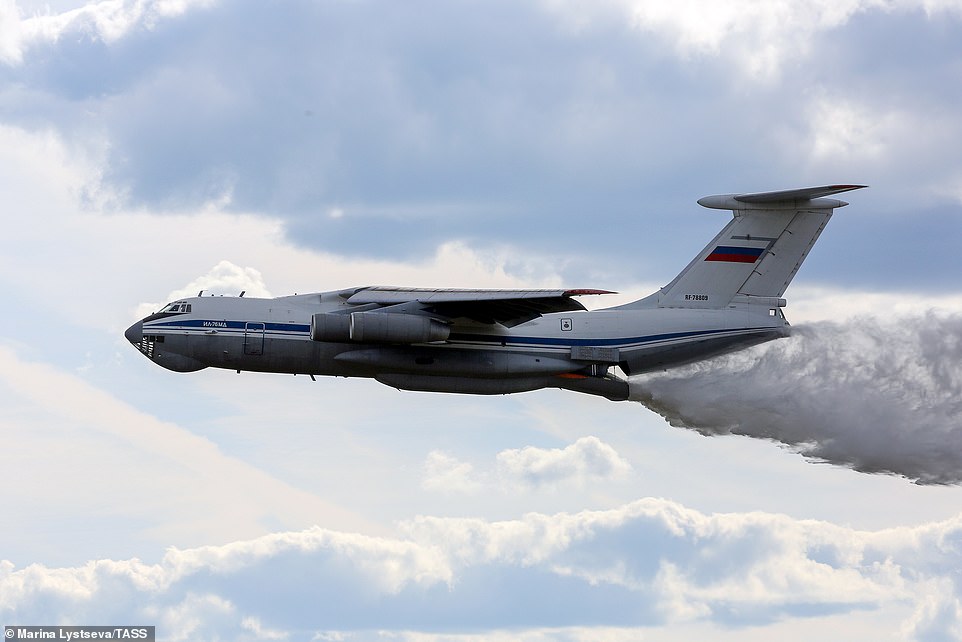 An Ilyushin Il-76 multi-purpose strategic airlifter releases water over Alabino firing range – the Il-76 is a heavy freighter capable of landing on improvised runways in remote areas. Aerial, naval and ground vehicle displays will be put on throughout the exhibition.