Russia simulated going to war against NATO and Germany

A massive programme of war games featuring tens of thousands of troops and code named ‘Zapad’ took place near the Belarus capital Minsk in September.

At the time there were fears Moscow was using the training as a cover to station soldiers and equipment in the country.

Analysts from two Western intelligence agencies have now claimed that the exercises, which included artillery, tanks, rocket launches and simulated air and navy raids, were a dry-run for a ‘shock campaign’ against Western European NATO members.

Russia simulated going to war against NATO, bombing Germany and invading Baltic states during its ‘West 2017’ military exercises, analysts have revealed. Troops are pictured during the drills 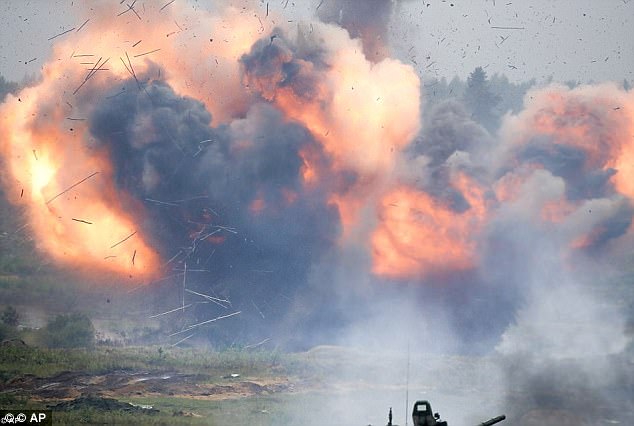 Explosive: Shells explode during the Zapad (West) 2017 Russia-Belarus military exercises at the Borisovsky range in Borisov, Belarus in September

Russia’s neighbours claimed at the time that the Kremlin was using the exercises as a rehearsal for an occupation of adjacent nations like Poland,Ukraine or the three Baltic republics – all of which were under Moscow’s rule before the Communist Soviet Union broke up in 1991.

Moscow has repeatedly said the exercises, which began on September 14, were purely defensive in nature and were not aimed at targeting a third country or group of countries.

However, according to German newspaper Bild, analysts said the drills imagined the invasion of the Sulwalki Gap, a small area of NATO land that links Belarus with the Russian enclave of Kaliningrad. A mock state was created for this invasion drill on a similar stretch of land.

Analysts also claimed Russia practised ‘neutralising or taking under control air fields and harbours (in eastern Europe), so there are no reinforcements arriving from other NATO states there’. 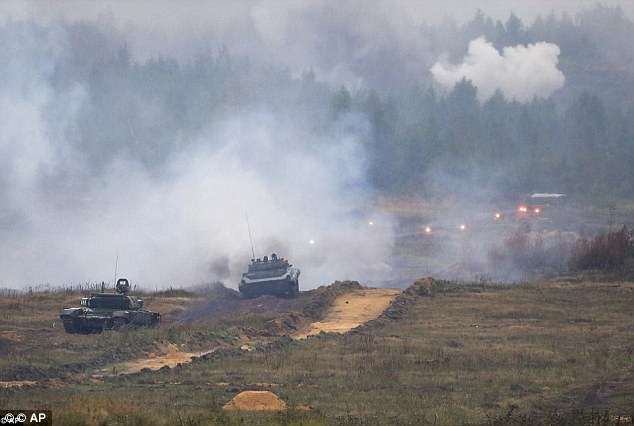 Military power: Tanks could be seen rumbling across open land in Belarus – which borders Poland, Lithuania and Ukraine. Analysts say the drills were a dry-run for a ‘shock campaign’ against Western European NATO members 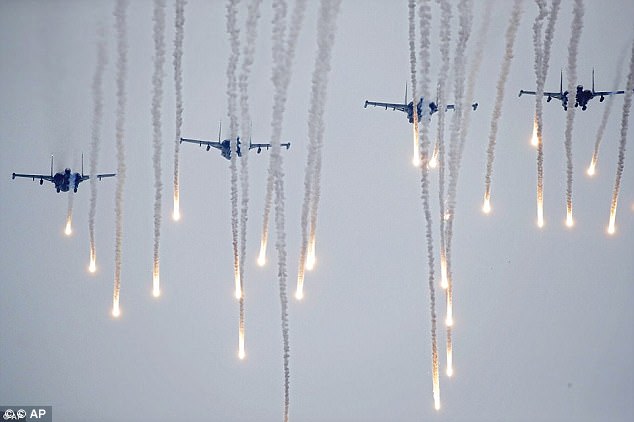 Analysts also claimed Russia practised ‘neutralising or taking under control air fields and harbours (in eastern Europe), so there are no reinforcements arriving from other NATO states there’

The analysts also said that the country’s air force flew through the North Sea and past Germany and the Netherlands for two days to rehearse taking out the likes of airports, power reactors and naval bases.

At the time, the Kremlin said it had provided exhaustive information on the exercises before they were held to the military attaches of all interested countries and allowed their observers to attend the event to allay any concerns.

But Polish Prime Minister Beata Szydlo voiced disquiet at the exercises and said Warsaw opposed any lifting of Western sanctions imposed on Russia over its annexation of Ukraine’s Crimea region and role in its separatist conflict.

‘We are very concerned by what is happening in Belarus, from the exercises there,’ Szydlo said during a visit to Bulgaria.

Lithuanian President Dalia Grybauskaite made the exercises the centrepiece of her annual speech to the United Nations General Assembly in New York.

‘Even as we speak, around 100,000 Russian troops are engaged in offensive military exercise “Zapad 2017” on the borders of the Baltic States, Poland and even in the Arctic,’ she said at the time.

‘The Kremlin is rehearsing aggressive scenarios against its neighbours, training its army to attack the West. The exercise is also part of information warfare aimed at spreading uncertainty and fear.’