Russia has been accused of hacking encrypted FBI communications in 2010, giving their spies access to the U.S. intelligence services most sensitive communications, in what one official has called a ‘stunning’ breach.

The move meant Vladimir Putin’s operatives in Washington, New York, and San Francisco were able to access both the location of FBI surveillance teams and communications between them, Yahoo News reports.

And it was said to be behind the decision by then President Barack Obama to expel 35 diplomats weeks before Donald Trump took office.

The US government had accused them of ‘acting in a manner inconsistent with their diplomatic status’ over the hacking of US political groups during the 2016 presidential election.

But new information suggests their actions had been part of the plot which hindered the Bureau from tracking Russian spies in the US and stopped the CIA from contacting their assets overseas.

One former senior official called it a ‘stunning’ technical breakthrough.

Another said it was a ‘lightbulb’ moment for the US when the activity was discovered, adding: ‘This could be why we haven’t seen [certain types of] activity.’

Russia has been accused of hacking encrypted FBI communications in 2010, giving their spies access to the U.S. intelligence services most sensitive communications. Russia’s President Vladimir Putin is pictured earlier this month 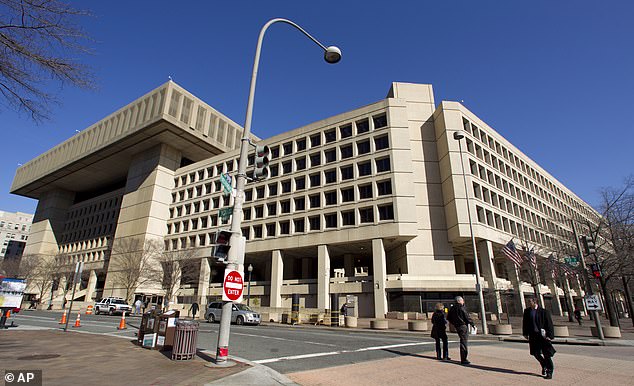 The Federal Bureau of Investigation (FBI) headquarters in Washington. The hack reportedly meant Vladimir Putin’s operatives in Washington, New York, and San Francisco were able to access both the location of FBI surveillance teams and communications between

At the time the Russian government dismissed hacking allegations as absurd but Mr Putin declined to order a tit-for-tat expulsion of American diplomats, claiming he would not ‘stoop’ to Obama’s level.

HOW DID THE RUSSIAN SPIES HACK THE FBI?

The Russians are said to have accessed  the FBI’s encrypted radio systems as well as the backup communications systems.

These breaches were reportedly monitored at the Russian diplomatic compounds on the East Coast seized by the Obama administration in 2016.

It hampered the US’ ability to track the movements of Russian spies in America, according to reports.

From secret ‘listening posts’ it is said the Russians also were able to crack FBI radio communications codes.

The wives of some spies were involved, staffing the annexes.

Compounds in Maryland and New York were allegedly being ‘used as signals intelligence facilities’ and were closed in 2016.

And they are also said to have used ‘mobile listening posts’.

Lightweight but outdated radios left America vulnerable, one official said, adding: ‘The amount of security you employ is the inverse of being able to do things with flexibility, agility and at scale.’

One former counterintelligence executive said: ‘Eventually they switched to push-to-talk cellphones. The tech guys would get upset by that, because if they could intercept radio, they might be able to intercept telephones.’

Mark Kelton, who served as the chief of counterintelligence at the CIA until he retired in 2015, said: ‘The Russians are a professionally proficient adversary who have historically penetrated every American institution worth penetrating.’

A former senior CIA official told Yahoo News: ‘It was a very broad effort to try and penetrate our most sensitive operations.’

Another former senior intelligence officer added: ‘Make no mistake, we’re in an intelligence war with the Russians, every bit as dangerous as the Cold War. They’re trying all the time and we caught them from time to time.’

And the impact of the reported breach was not only felt in the FBI. The CIA were also forced to stop certain types of communications with sources abroad, according to reports.

The threat of Russian spying resulted in meetings between lawmakers and the FBI and CIA, officials say.

It was reported earlier this month that the CIA pulled a spy with deep access inside the Kremlin out of Russia in 2017 because of leaks.

His position was so high up in Russia’s government ranks that, according to CNN, he was able to photograph documents Russian President Vladimir on Putin’s desk and send them to his American handlers.

The information was considered too sensitive even for President Barack Obama’s daily intelligence briefing; the CIA sent it to the Oval Office in a separate sealed envelope.

And according to the New York Times, the agent was deeply involved in intelligence-gathering about Russia’s efforts to interfere in the 2016 U.S. election. That information gave American officials confidence that Putin had ordered the hacking of Democratic emails during the campaign.

The spy is now reported to be living in Washington under his real name but officials still fear for his life.

He added: ‘This is, in fact, the core risk and it’s right that it should be the focus. But we were neither organized nor resourced to deal with counterintelligence in networks, technical networks, electronic networks.’

An unidentified official added: ‘Anytime you find out that an adversary has these capabilities, it sets off a ripple effect. The Russians are able to extract every capability from any given technology. They are singularly dangerous in this area.’

Another added: ‘There was a gap between when they were really onto us, and when we got onto them.’ 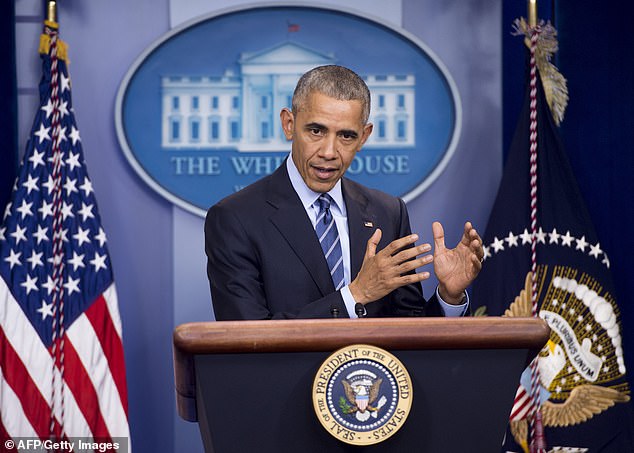 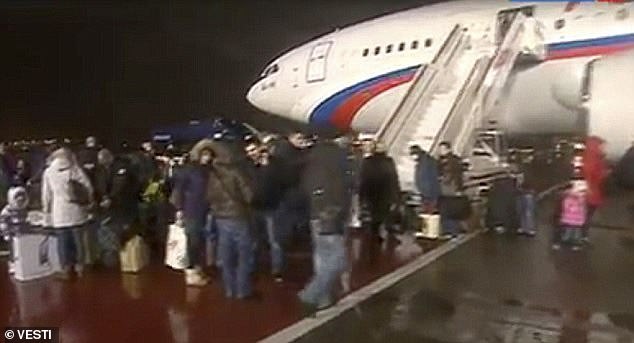 President Obama expelled 35 diplomats over the hacking of US political groups during the 2016 presidential election. They are pictured arriving back home in Moscow

The reported breach sparked fears of a mole within the U.S. government and it is still not known exactly how the Russians were able to carry out the breach.

It also created a ‘huge concern’ for the safety of those identified and the FBI even reportedly stopped contact with some of its sources in Russia.

And it forced the switch back to encrypted radios in what one senior official called a ‘expensive venture’.

The FBI, the CIA and the Russian Embassy in Washington, D.C. each declined to comment on the reported breach to Yahoo News.