A man who was raised by dogs as a child has spoken of how the street strays saved his life.

Ivan Mishukov, now 27, was rescued by officials when he was five after having lived on the streets for two years. According to him, the animals were his ‘only family’.

Each morning the boy went to the local bakery with his dogs to beg for food in Reutov, a town near Moscow. 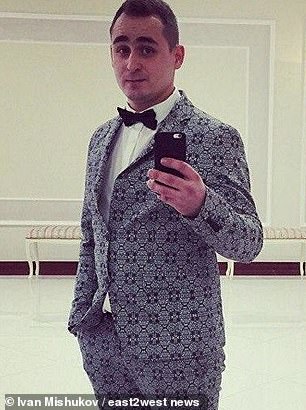 Ivan Mishukov, 27, attributes his survival on the streets of Russia to a pack of stray dogs. He now works as an operator at a plant producing wire in Reutov

Ivan’s love for dogs continued throughout his life. ‘They gave me a lick on the face – that’s how dogs give kisses,’ he said

His case became known around the world and now Ivan – also known as Vanya – has spoken of the debt he owes to the strays.

While usually trying to avoid talking about this grim period of his life, he admitted: ‘I understand that if it wasn’t for those (dogs) I wouldn’t have survived in the street. He now earns his own living with a factory job.

‘I am also grateful to policemen who took me from the pack, and of course to my foster mum who raised me,’ Ivan added. 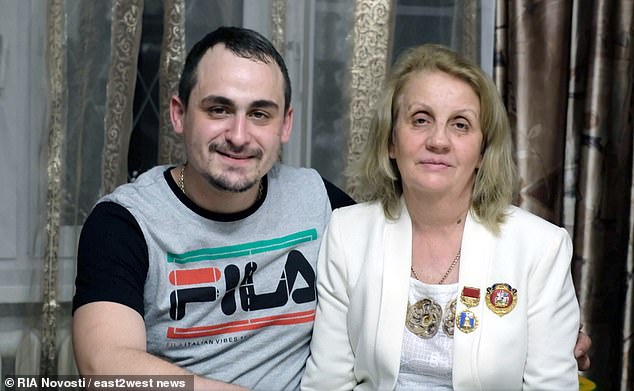 Ivan with his foster mother Tatiana Babanina. Tatiana took him into her care when police discovered Ivan living in the streets 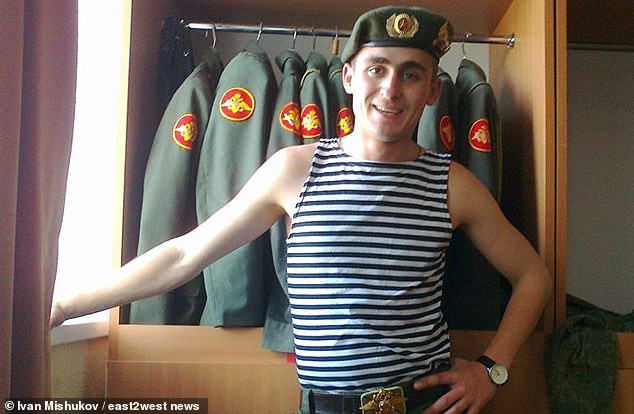 Tatiana helped Ivan in his recovery. He then gained entry to prestigious Kronshtadt naval cadet school where he once paraded in front of Vladimir Putin 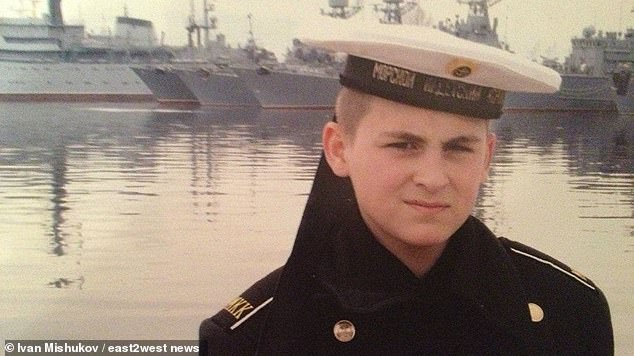 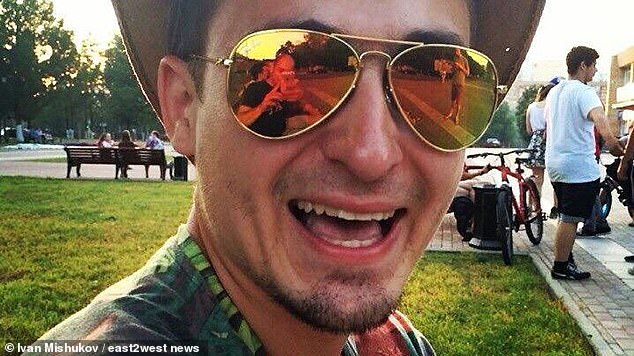 Ivan’s case became known around the world and although he doesn’t like to openly discuss the dark period in his life, he expresses his gratitude to the dogs who saved him 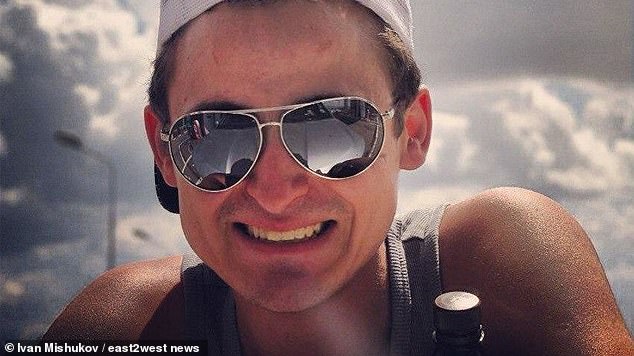 ‘I am also grateful to policemen who took me from the pack, and of course to my foster mum who raised me,’ says Ivan

As a young child, Ivan lived with his alcoholic grandfather who abandoned him for days on end. He turned to the street dogs for solace.

It took police three attempts to take the boy away from the dogs as the strays refused to let them come close to the child.

‘I loved the dogs and they loved me,’ Ivan told social workers after he was rescued.

The dogs were named Jesse, Goga, Masha and Seva – and when the animals scavenged food they shared it with Ivan, and vice versa. 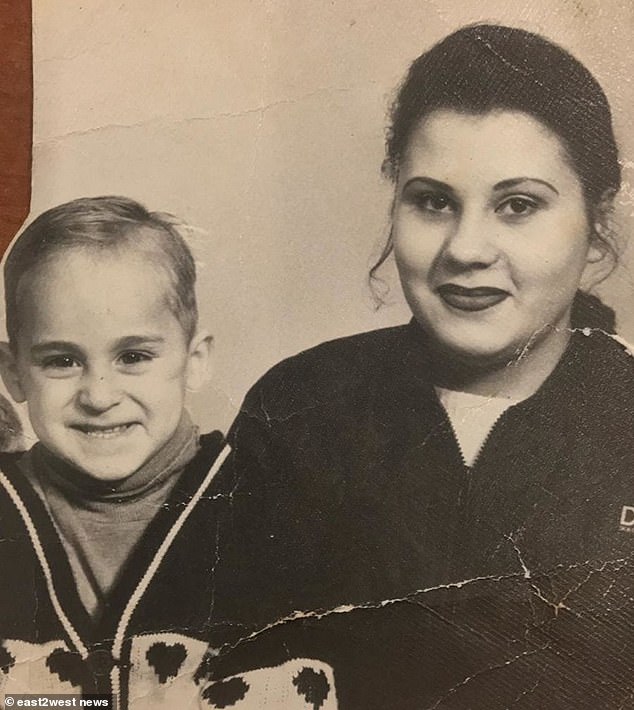 Ivan is pictured here with his aunt. Prior the streets, Ivan lived with his alcoholic grandfather who abandoned him for days on end 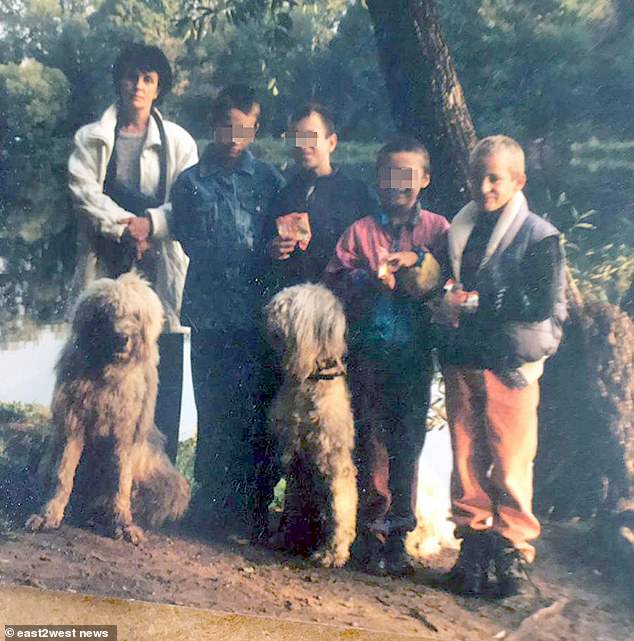 Ivan is pictured here with a foster family. His love for dogs continued after leaving the streets 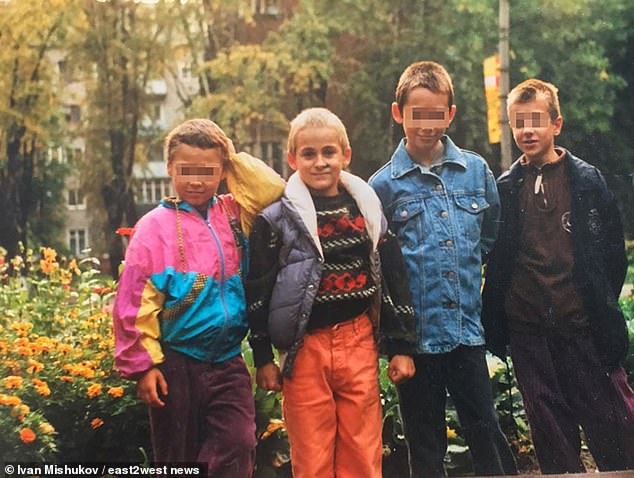 Ivan (second to left) with his brothers. The stray dogs kept Ivan alert on the streets as well as providing him with comfort 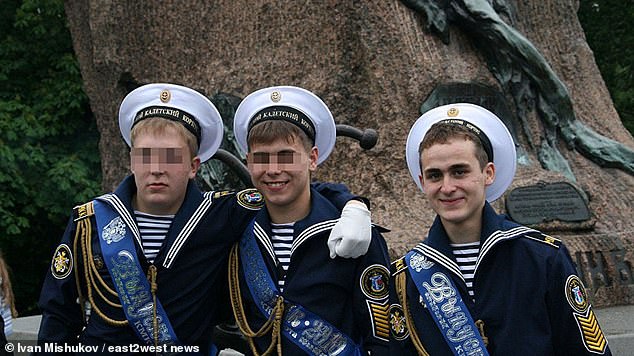 Ivan revealed that the dogs kept him warm during the cold Russian winter months by cuddling up to him.

They kept him warm on icy nights when he cuddled up to them, Ivan revealed earlier.

‘They gave me a lick on the face – that’s how dogs give kisses,’ he explained.

Social workers ‘dumped’ the child in a grim orphanage near Moscow.

Incredibly, his beloved dogs sensed his location and waited in vain for him at the institution’s gate.

Later they were killed on the orders of cruel officials.

Soon afterwards, Ivan was raised by caring foster mother Tatiana Babanina. Tatiana’s loving care ensured Ivan recovered. He then gained entry to the prestigious Kronshtadt naval cadet school. There, he had the opportunity to parade in front of Vladimir Putin.

Ivan hoped for a career in the FSB security service but instead returned to Reutov and now works as an operator at a wire producing plant.

Another former feral child, Viktor ‘Vitya’ Kozlovtsev, from Podolsk, now 20, spent four years living with a Rottweiler, sleeping on the same rug and sharing a bowl. 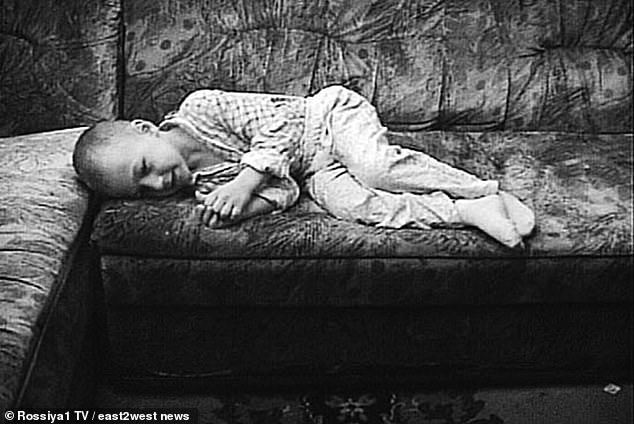 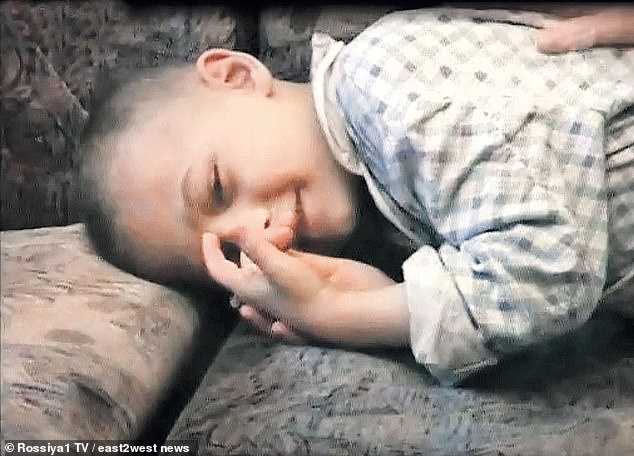 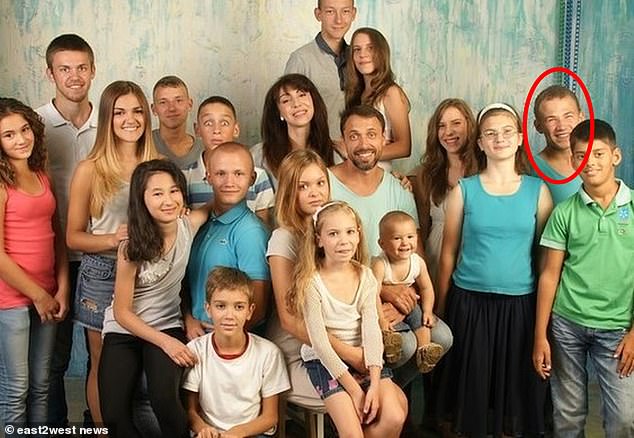 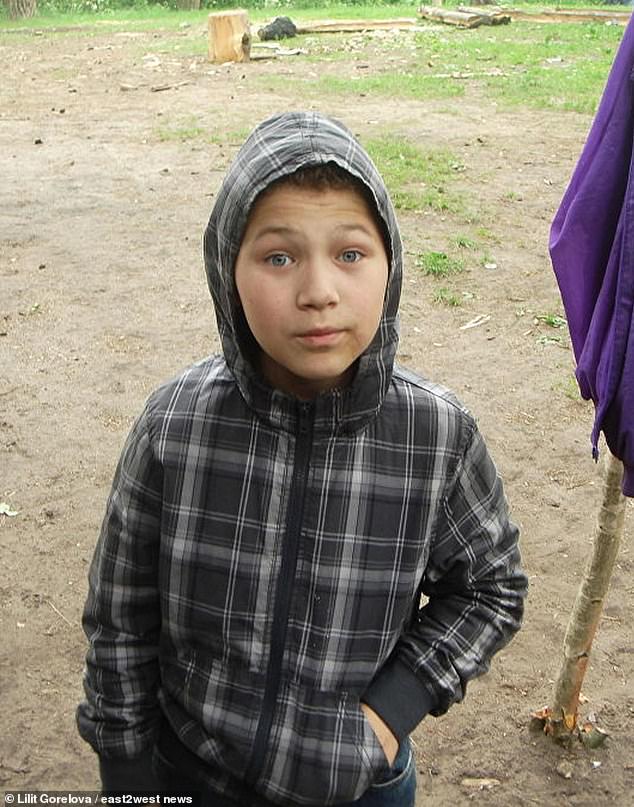 After living with the Rottweiler, Viktor’s foster mother said ‘he likes sewing, he is happy with a needle in his hand’

When he was found at the age of seven, he could hardly talk and instead barked, walked on all fours, and ate like a dog from a bowl.

Viktor slept on the carpet on the floor.

His mother – an alcoholic – was deemed ‘incapable’ of raising him.

According to a Russian report, ‘only the dog cared for him.’

Later with the help of a loving foster mother Lilit Gorelova, he began studying to become a tailor.

‘He likes sewing, he is happy with a needle in his hand,’ Lilit said. ‘But he also has an idea to become a gardener.’ 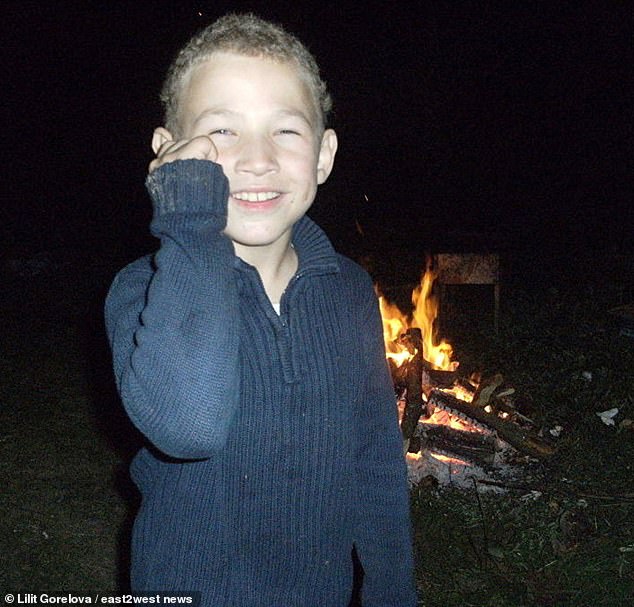 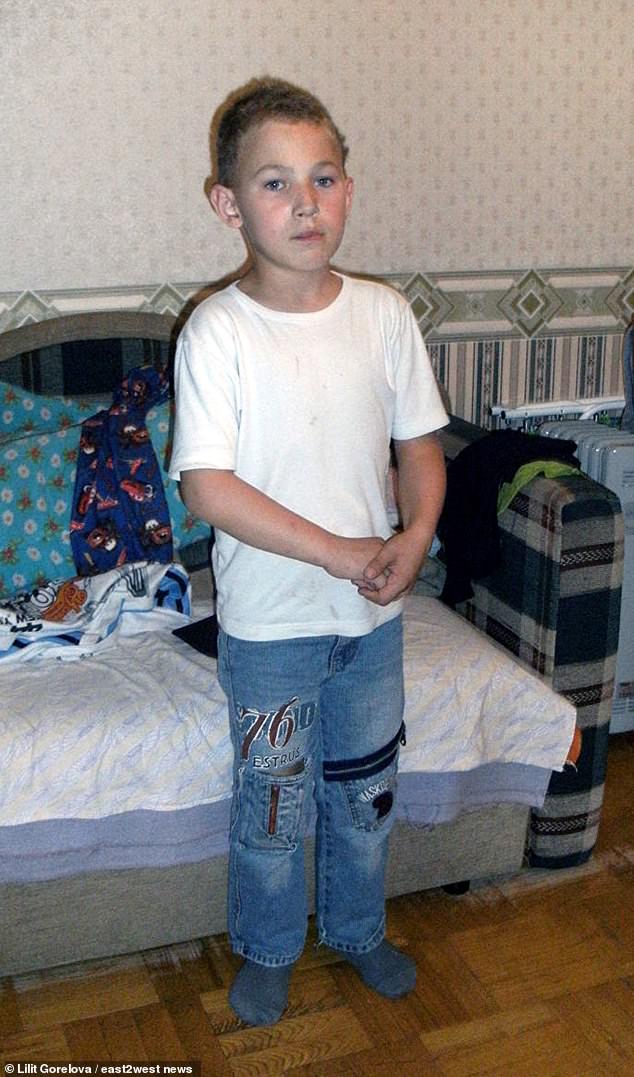 With the care of his foster family, Viktor is beginning to catch up to others his age. He is learning new skills and made ‘big progress’

His experience as a child has left a deep impact and slowed his cognitive development.

‘Of course we are trying to teach him all the skills of an adult person and he’s making big progress,’ Lilit said proudly. ‘For example, this year he started commuting in public transport on his own’, she added. 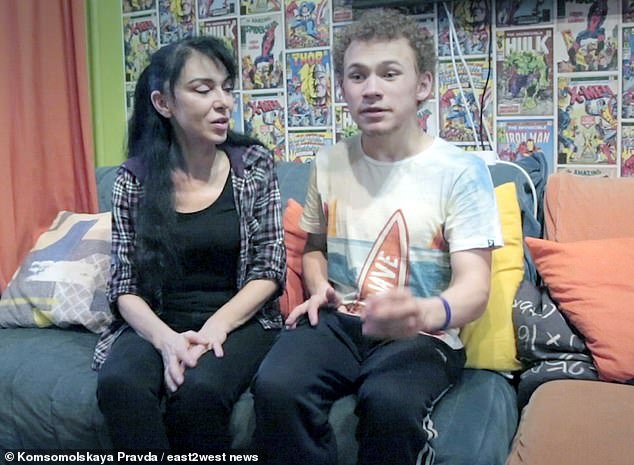 Viktor now enjoys tailoring as well as gardening. This year, he began taking public transport on his own 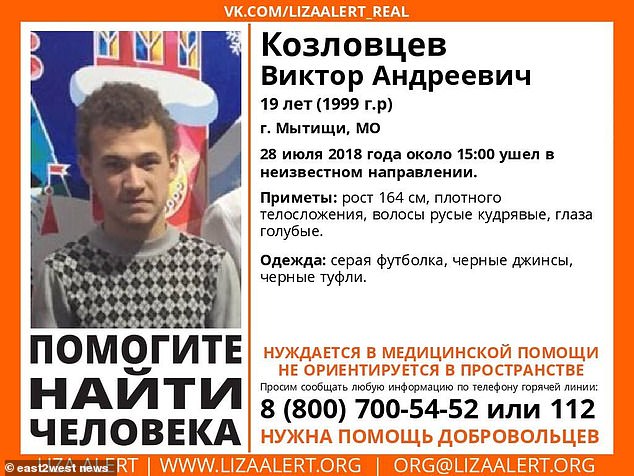 Abandoned as a child, Viktor’s mother was an alcoholic and deemed ‘incapable’ of raising him

‘Sometimes we secretly follow him in a car and see if he behaves well,’ Lilit continued.

When asked whether he remembers his childhood, Viktor shakes his head and hides his head in his shoulders.