Russian MP accuses Theresa May of acting like Hitler

A firebrand Russian MP has compared Theresa May to Hitler and accused of UK of creating ‘fake news’ over the poisoning of double agent Sergei Skripal.

But he was cut off after making a series of wild accusations, branding Mr Sikorski ‘a prostitute’ and insisting claims Russia poisoned former spy Sergei Skripal were ‘fake news’. 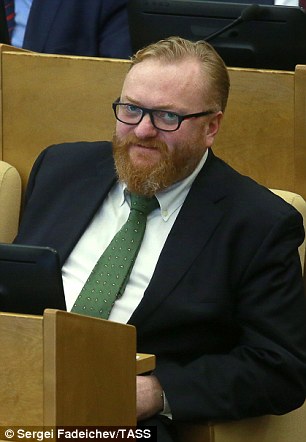 Shouting down a phone line from Russia, Milonov said: ‘We’ve been told you think a guy who was imprisoned in Russia and was sent as a useless fake agent to you as an exchange in some spy drama was poisoned by some 50 years old Soviet gas. It’s nothing to do with Russia!’

When asked how the nerve agent came to be in Britain, he replied: ‘This poison is 50 years old, it’s not modern stuff. You can take this poison from any laboratory in Ukraine or other fake countries that are happy to help you.

‘This is something like theatre or James Bond movie that you created such a horror about new Russia which is very dangerous. For us this guy is useless.’

Mr Sikorski, a former Polish Foreign Minister, said Russia’s motivation was to make Putin look strong and to get rid of spies who they perceived as having betrayed them.

But he inflamed Milonov by insisting he wasn’t ‘a real MP’, as Russia didn’t have real elections.

Milonov exploded, calling Sikorski a ‘prostitute’ and Poland a ‘small country, dependent on the US’.

Milonov added: ‘My personal point of view is that Theresa May and her colleagues have created a fake story because they need an explanation for the British people why they are going to perform some anti-British steps in favour of US policy against Russia.

‘So they had to make this fantasy, they had to try to kill this poor pensioner, useless for us. This is a drama for British TV. It’s the behaviour of Hitler.’ 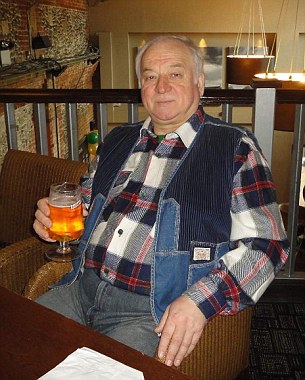 He started talking about the burning of the Reichstag before Today programme host Sarah Montague cut him off and spoke to Mr Sikorski only.

Mr Sikorksi said Milonov gave ‘best witness to his own character’, adding that his showed how Britain was being ‘taunted and humiliated’ by Russia over the poison plot.

Milonov is well known for a series of homophobic statements he has made amid his attempts to ban what he calls the ‘propaganda of homosexuality’ in Russia.

Listeners to Radio 4 questioned why the Today programme had brought him on.

One Twitter user wrote: ‘Utterly moronic Russian ‘MP’ Milonov on Radio 4 just now. Don’t they do they their research there?’

Others branded Milonov ‘a clown’ and said the interview was ‘shameful’.