Russian mum who let baby starve to death is jailed

Viktoria Kuznetsova, 17, from Rostov, Russia, sat emotionless as her sentence was read out in court

A teenage mother who let her baby starve to death so she could party with friends has been jailed for just six and a half years.

Viktoria Kuznetsova, 17, from Rostov, Russia, sat emotionless as her sentence was read out in court.

The court was told that Kuznetsova had been planning to kill nine-month-old Egor when she started college.

She said the toddler kept her up at nights and didn’t let her go out with friends.

After her husband was called up for military service, the teen put baby Egor in a pram, locked the door and went off to see her friends.

She then spent the whole week partying and staying in college dorms while her baby slowly starved.

She returned once to give some water to her dog.

The judge said: ‘The cause of nine-month-old Egor’s death was dehydration and starvation.

‘When the baby was found Inside Viktoria’s house he was already dead, though his eyes were still wide open from terror.

‘According to investigators the baby was literally skin and bones.

‘An autopsy showed the baby’s internal organs shut down one after another because of lack of food and water.’

When police arrived at the teen’s room the baby was already dead and rotting.

According to police, Kuznetsova did not show any guilt and only cared about what would happen to her.

Now there has been a public outcry on social media over the leniency of her punishment. 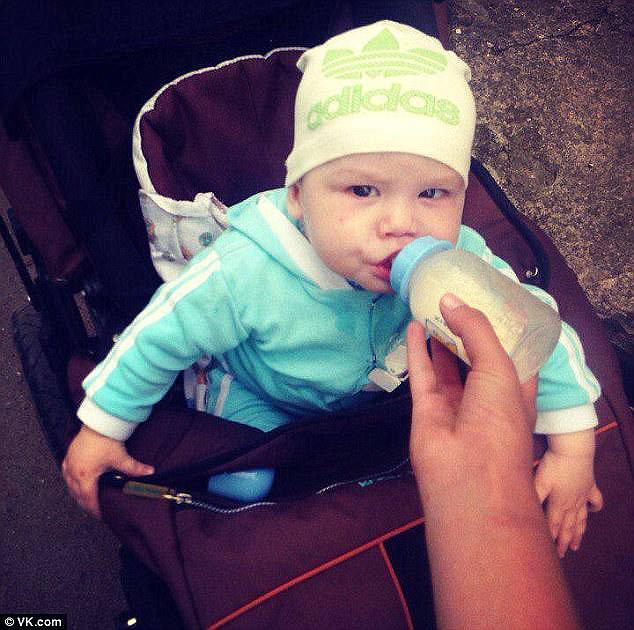 It was previously reported that when the baby was just one month old, Kuznetsova had passed him to an orphanage. Pictured: Egor

Nanar Hachatryan posted: ‘She fed her dog, but not her baby, I am at loss of words. She has to be sterilised.’

Someone calling himself Yegor wrote: ‘I would allow beheading of such w*****.’

While Mihail commented: ‘Six and half years for killing her baby? Are they crazy?’

It was previously reported that when the baby was just one month old, Kuznetsova had passed him to an orphanage – only for the organisation to return the baby to her when he was seven months old.

Her devastated husband was said to be seeking a divorce.