Russian singer attacks her ex on the red carpet

A Russian celebrity couple erupted into a row on the red carpet of an awards ceremony, held a day after they called their relationship quits.

Female singer Alina Yan is seen pushing her ex Roman after he is heard criticizing the outfit that she worn to the Russian Music Box awards ceremony. He eventually relents and pushes back.

Roman is said to have been the host of the show, which took place in Krasnogorsk, near the Russian capital of Moscow yesterday.

The slightly uncomfortable incident was caught on camera near the press section of the show, which is perhaps why it escalated so quickly.

Roman said that Ms Yan – a songstress with over 90,000 Instagram followers – looked like ‘puss in boots’ with her lavish sliver chrome knee high boots that shewas wearing on the night.

She responded by publicly announcing how he had ‘cheated on her’ with his ex during their relationship and repeatedly hitting him.

Alina Yan is a Russian singer with over 90,000 Instagram followers. She poses on the red carpet of the Russian Music Box Awards held near Moscow

Ms Yan is seen slamming Roman on the head with her clutch bag and kicking him as he bends down to pick something up off the ground.

Roman retaliates by pushing her against the wall, where she stumbles, finding it difficult to find her balance. 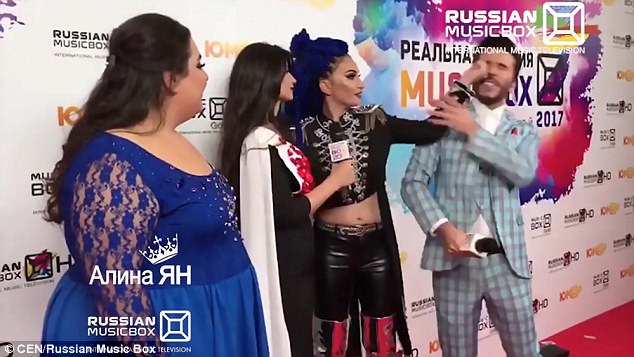 The Russian songstress is seen violently attacking her ex boyfriend Roman, who was the host of the awards ceremony. She said he had cheated on her 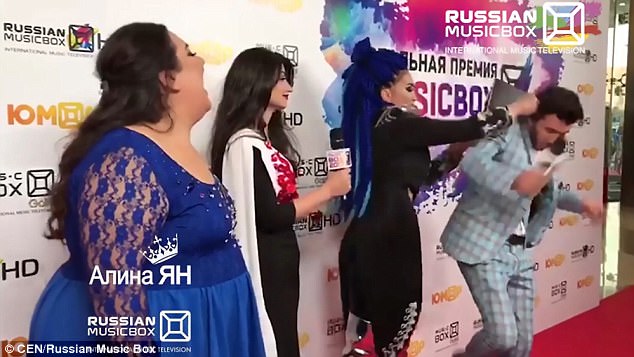 The incident came after Roman criticized the singer’s outfit, saying she looked like ‘puss in boots’ 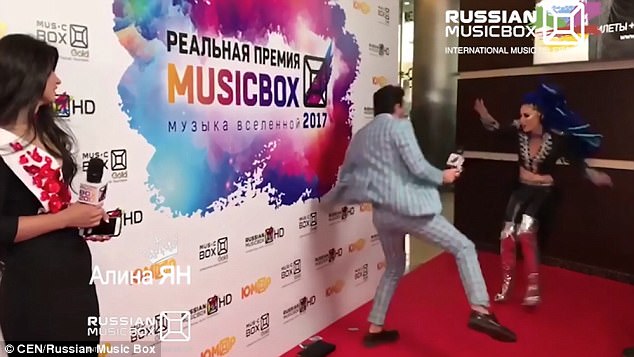 Roman eventually pushes Alina against a wall, causing her to stumble. It was quite the scene for the press wall

Roman said he was in a relationship with Ms Yan for two months.

He added: ‘When I saw her near the press wall, I found her costume was ridiculous and told her about it. She went angry and attacked me. Everything happened very quickly, I did not even understand what happened.’