This is the moment two US aircraft were buzzed by Russian fighter jets in a tense encounter over the Black Sea.

Footage apparently taken from one of the Russian jets shows one of the US bombers being refuelled mid-air. The supersonic U.S. Cold war-era planes were originally designed to carry nuclear bombs and missiles but now carry conventional payloads.

‘After the foreign warplanes had been turned away from Russia’s state border, the Russian fighters safely returned to their home air base.’

The encounter coincided with a visit to the region by US defense secretary Lloyd Austin who said that Russia was an obstacle to peace in eastern Ukraine and called on Moscow to end destabilising activities in the Black Sea and along Ukraine’s borders. 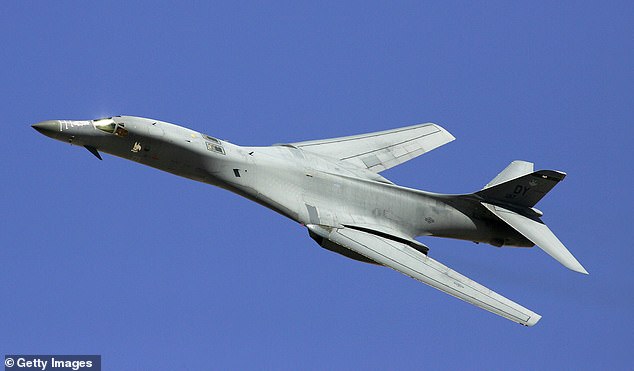 Pictured: Stock image of a US B-1B bomber, the type of aircraft escorted over the Black Sea by Russian fighter jets

Moscow blames Kiev for a lack of progress in implementing a peace deal covering eastern Ukraine, something Ukraine denies.

B-1B bombers are being used in a series of exercises with NATO allies across Europe encompassing the Arctic, the Baltics and the Black Sea, Air Force Magazine reported earlier this month.

In the latest incident, the Russian defence ministry added that once the American aircraft had altered their course and the jets had ‘escorted them over the Black Sea’, the Russian pilots returned to base.

A similar incident occurred on Sunday over the Sea of Japan, just days after a Russian confrontation with a U.S. naval destroyer, also on Russia’s Pacific coast.

Russia claimed one of its warships on Friday forced a U.S. Navy destroyer to abandon what it said was an attempt to intrude into its territorial waters in the Sea of Japan.

Video released by the Russian ministry of defense appears to show the moment its anti-submarine vessel Admiral Tributs closed to within 60 yards of the U.S. destroyer USS Chafee in Peter the Great Gulf, to the south of Vladivostok. 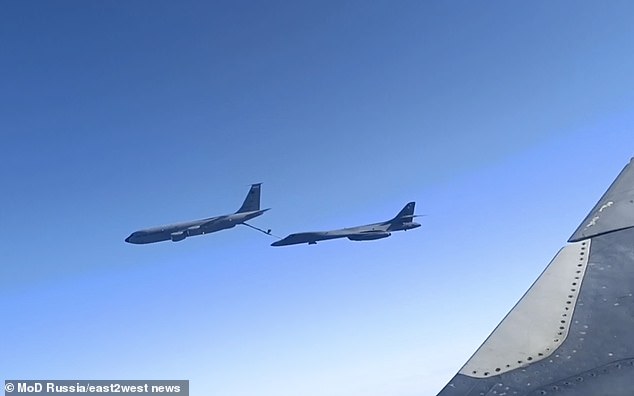 The Russian defence ministry released video footage, taken from inside one of their Su-30 fighter jets, showing the tense situation as one of the two US B-1B bombers and a KC-135 tanker plane flew alongside the Russians 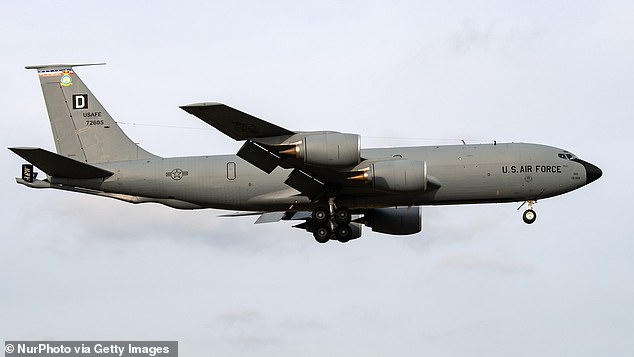 Pictured: A stock image of a KC-135 tanker plane, the type of aircraft seen in the video footage released by the Russian defence ministry

But the account was disputed by the U.S. Navy which said the Russian statement was ‘false’ and that the interaction was ‘safe and professional.’

The incident came while Russia and China conducted joint naval drills in the area, and is the latest in a series of close encounters between Russian and Western warships.

Relations between Russia and the U.S. are at their lowest point since the Cold War.

The Russian defense ministry said the Admiral Tributs radioed a warning to the billion-dollar USS Chafee to say she was ‘in an area closed to navigation due to exercises with artillery fire.’ 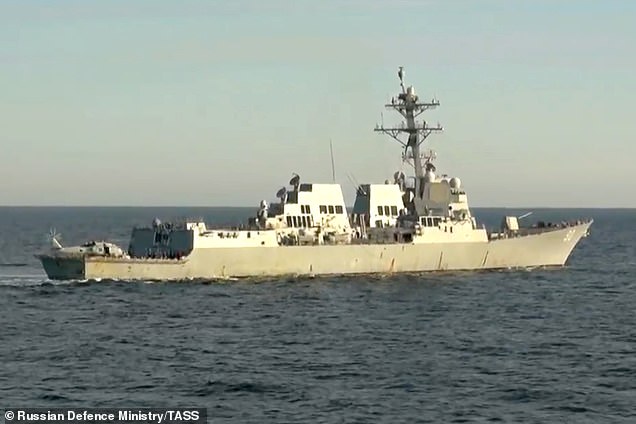 Pictured in this video screen grab is the guided missile destroyer USS Chafee (DDG 90), which has been deployed in the Sea of Japan, near Russia’s territorial waters, for a few days 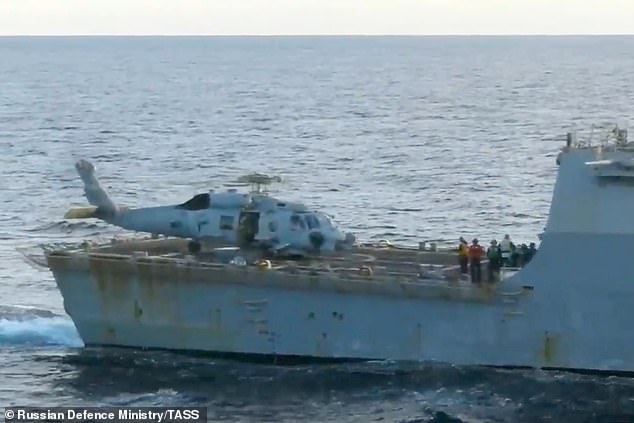 The USS Chafee responded to requests to change course by raising flags indicating it was about to launch a helicopter, according to the Russian defence ministry

‘Acting within the framework of the international rules of navigation, the Admiral Tributs set a course for ousting the intruder from Russian territorial waters,’ it said.

USS Chafee changed course when the two ships were less than 65 yards apart.

It said the episode lasted less than 50 minutes and denounced what it said was U.S. ‘crude violation’ of rules on averting ships collisions.

But a spokesman for the U.S. Pacific Fleet contradicted the Russian account.

‘The statement from the Russian Defense Ministry about the interaction between our two Navy ships is false,’ he said. 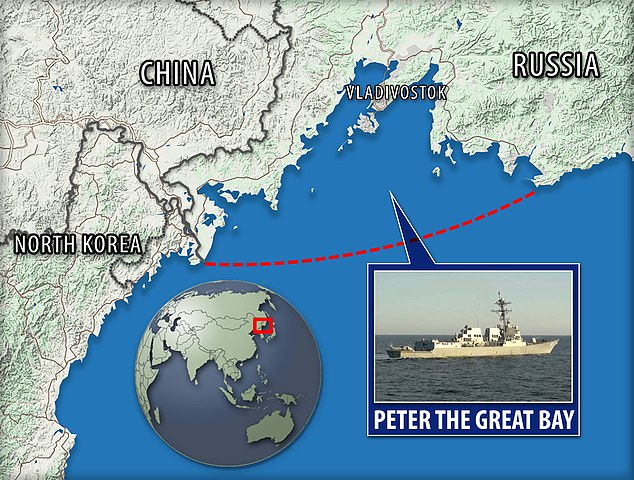 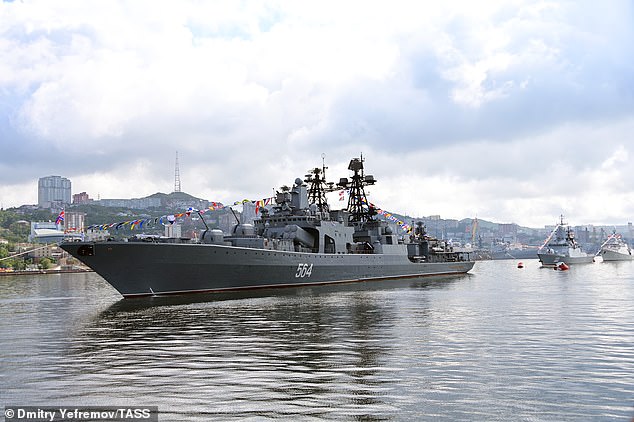 The Russian destroyer Admiral Tributs pictured in Zolotoy Rog, or the Golden Horn Bay, during a parade in the Sea of Japan

The USS Chafee was conducting routine operations in international water when a Russian destroyer came to within 65 yards of the U.S. warship while it was preparing for flight operations.

‘The interaction was safe and professional,’ he said.

‘Although Russia issued a Notice to Airman and Mariners (NOTAM/NOTMAR) in this area for later in the day, the NOTAM/NOTMAR was not in effect at the time of the interaction.

Either way the diplomatic fallout was swift. The RIA news agency reported that the defense ministry summoned the U.S. military attache in response.

The attache was told about ‘unprofessional actions’ of the crew of the Chafee, said the report.

It comes as Russia has put tens of thousands of army reservists through retraining as Vladimir Putin authorises a ‘record’ £10 billion boost in military and security spending.

Spending on nuclear weapons is set to soar 23 per cent to permit the purchase of the most modern missiles, said one report, with the West blamed for an arms race. 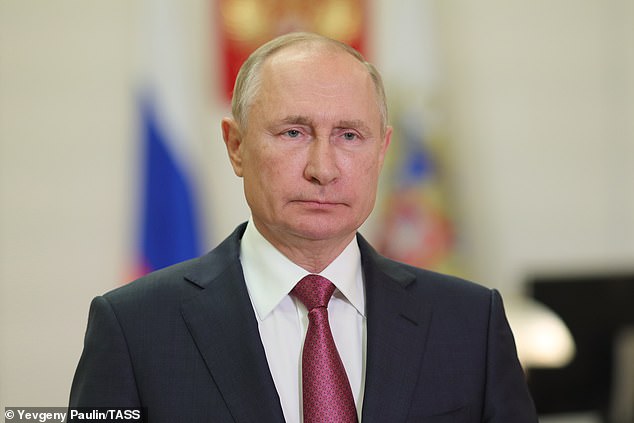 ‘Five cohorts of reservists have already sharpened up their military skills,’ reported Zvezda TV, owned by the Russian defence ministry.

This follows a barrage of war games and new missile tests – including hypersonic – conducted by Russia in recent months.

Only this week, Russian forces practised ‘invasion tactics’ in Crimea, annexed from Ukraine in 2014.

New footage shows the country’s combat reserve in action at field camps in nine army training grounds going on during September and October.

The Kremlin has boosted remuneration for former conscripts or ex-army officers signing up for the reserve for a state that has more than one million service personnel. 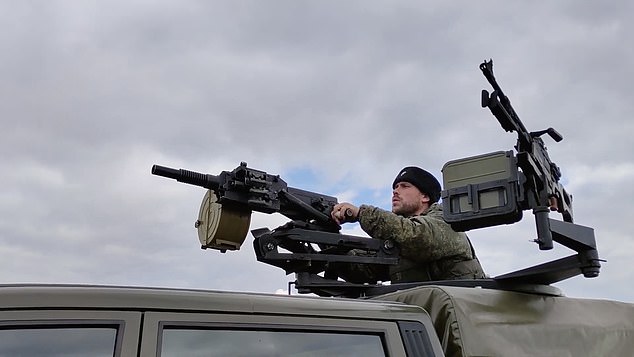 ‘The reservists underwent a course of combined-arms instruction, shooting from standard small arms, and studied the configuration and capabilities of artillery guns and military hardware,’ said a report by the channel.

‘They also acquired the principal skills needed to ensure and organise the guarding and defence of military and state facilities.’

Any former conscript can join the reserve from the age of 19 with a maximum age for soldiers and sailors of 50.

But male senior officers – holding the rank of colonel or captain first class – may be aged up to 70.

For women the maximum is 45 for junior ranks, and 50 for officers.

This comes as Russian spending on Russia’s defence and security services and law enforcement is ‘likely to break a record’ for the coming three year period, according to Nezavisimaya Gazeta. 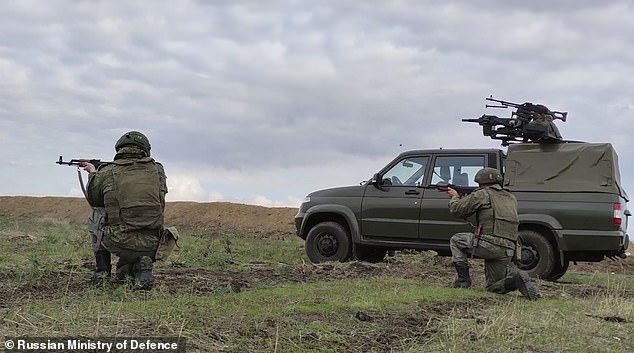 It will ‘increase by an aggregate of almost one trillion roubles (£10 billion) and will amount to about a quarter of all government spending,’ said the paper.

Chairman of the Russian parliament’s defence committee Colonel-General Andrei Kartapolov has announced a 14 per cent rise in spending on nuclear weapons.

This will allow ‘the purchase of the most modern weapons systems’ and research to create ‘new types of weapons’. 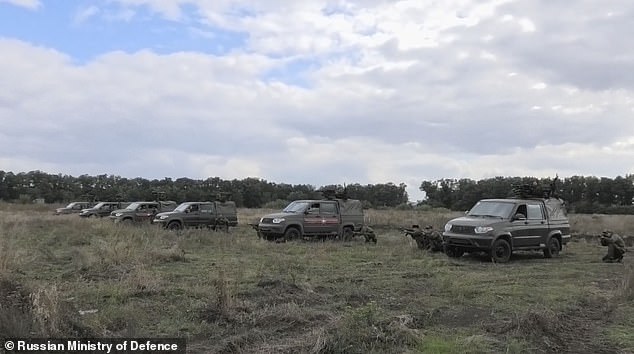 Pictured: A number of Russian army vehicles line up alongside one another with reservist soldiers crouching on the floor during retraining

The United States continues the arms race despite Russia’s proposals to stop it, he claimed.

Washington had pulled out of the Intermediate-Range Nuclear Forces Treaty, one of the ‘cornerstones of the European security system for many years’. 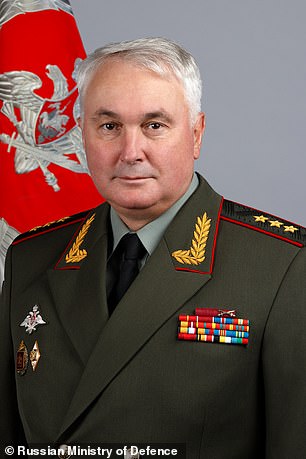 He said: ‘You cannot win in the arms race because this is a thing where there can be no victors by definition.

‘And our partners should not be complacent about having once defeated the Soviet Union.

‘Well, they did. So what? Has it made peace any easier?

‘Has the world become a calmer place? Of course not.’

Kartapolov said spending on nuclear weapons would rise by 14 per cent.

But Nezavisimaya Gazeta said the figure over three years was more than 23 per cent.

Military, security and law enforcement spending would amount to around a quarter of government spending, allowing for the boost in reservists,

‘This is the best defence budget in modern Russia,’ he said.