This is the shocking moment the host of a TV talk show fought a guest speaker during a heated debate.

The fight happened during a discussion on the War in Donbass, Ukraine, on the Mesto Vstrechi (Meeting Point) show on Russia’s NTV channel.

Ukrainian expert Dmitriy Suvorov and host Andrey Norkin battled it out after an emotional conversation.

Suvorov became upset after another guest claimed many children were dying in the region.

The pair ended up shouting at each other and Suvorov started yelling: ‘You b******! Show the photos!’

Norkin suddenly decided to intervene and walked over to Suvorov and grabbed hold of him.

Suvorov jumped to his feet, whipped off his glasses and angrily pushed Norkin away as the host jumped on a barrier to fight back. 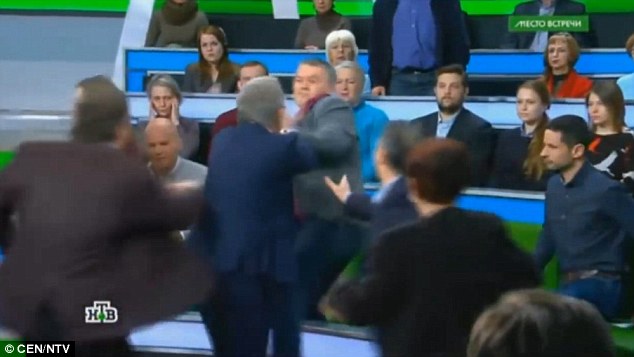 Members of the show’s crew and other guests tried to separate the pair and the studio floor descended into chaos.

Norkin is apparently knocked to the floor at one point while a woman, who had been sitting next to Suvorov and holding a microphone so he could be heard, is also sent flying.

Norkin’s co-host, Olga Belova, defended her colleague and said that Suvorov had been acting in a ‘boorish’ manner.

She said: ‘There couldn’t have been any other outcome. Unfortunately I’m a woman, so I couldn’t hit him.’ 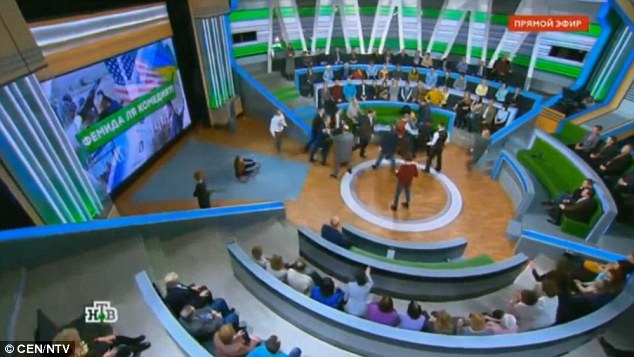 The footage of the confrontation proved an instant online hit – attracting more than 150,000 views in less than 24 hours.

Netizen ‘Vasiliy Bushnev’ said: ‘Russian TV got flooded by moronic TV hosts’, while ‘Kung fury’ commented: ‘F*cking clowns. The things they are ready to do for TV ratings.’

And another online commentator, going under the name of ‘3’, noted: ‘Both of them are adult men, but they still don’t know how to fight.’

The War in Donbass is an armed conflict between government forces and pro-Russian separatists in the Donbass region of Ukraine.