Brutal fist fights, football matches blended with wrestling and strongmen flinging dumbbells – this is how one Russian village marks their religious festivals.

Competitors gathered in Atmanov Ugol, Tambov Region, this weekend to celebrate the Orthodox feast of the Dormition of the Mother of God.

And the traditional festival, known as Atmanovskie Kulachki, involves some bloodthirsty folk games.

The wall line fight involves participants forming two opposing rows then lunging at each other with their fists.

Fighters often end up breaking off into pairs to continue the battle – which sometimes ends in bloodshed, missing teeth and fractured ribs.

Meanwhile wrestlers grappled and locked each other in chokeholds, and strongmen launched logs over their heads.

And in a twist on traditional football, the ‘rusmyach’ was also underway.

During the clash, competitors try to get the black ball into the goal using whatever means at their disposal – including wrestling and dragging their opponents to the ground. 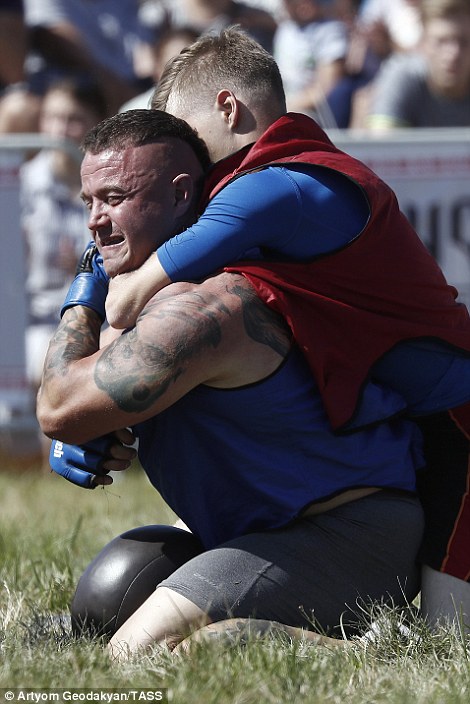 The competitor in blue gloves tried his hand at two bloodthirsty folk games at the festival. He made an appearance in the wall line fight (left) as well as the ‘rusmyach’ (right) 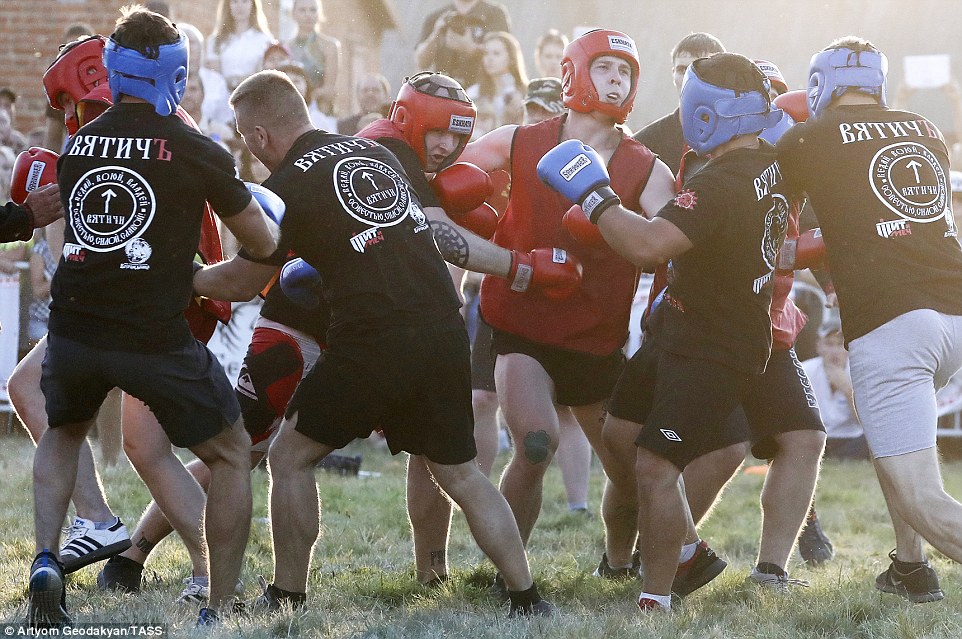 Brutal: Competitors in the wall line fight charge at each other with their boxing gloves raised during the religious festival 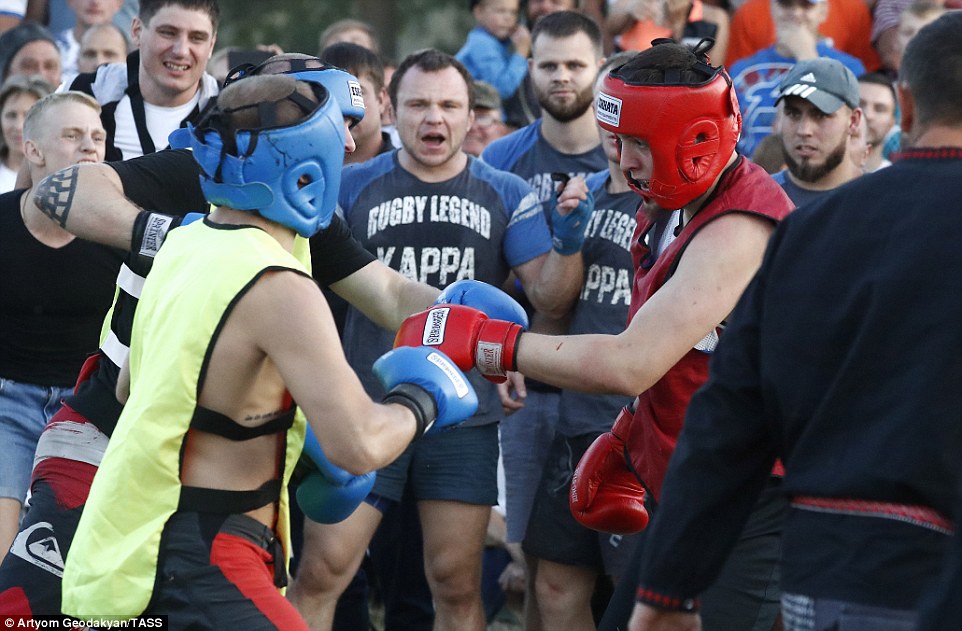 Head to head: Spectators cheer on the participants of the wall line fight as competitors square up to each other 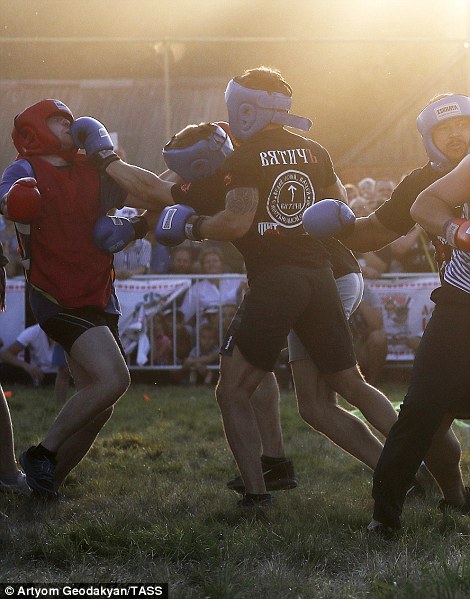 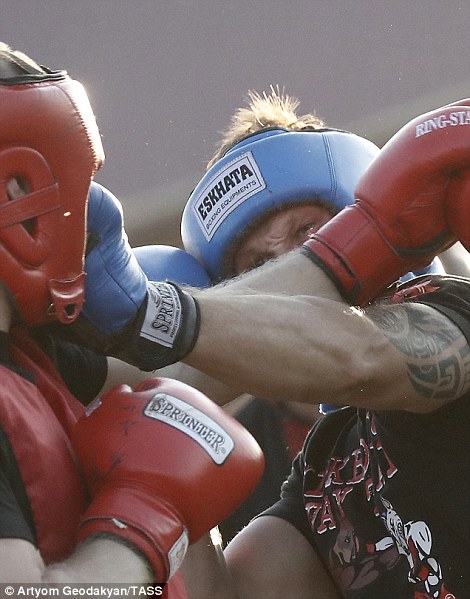 Competitors in the wall line fight rain down punches, with some hitting their opponents on the nose and chin 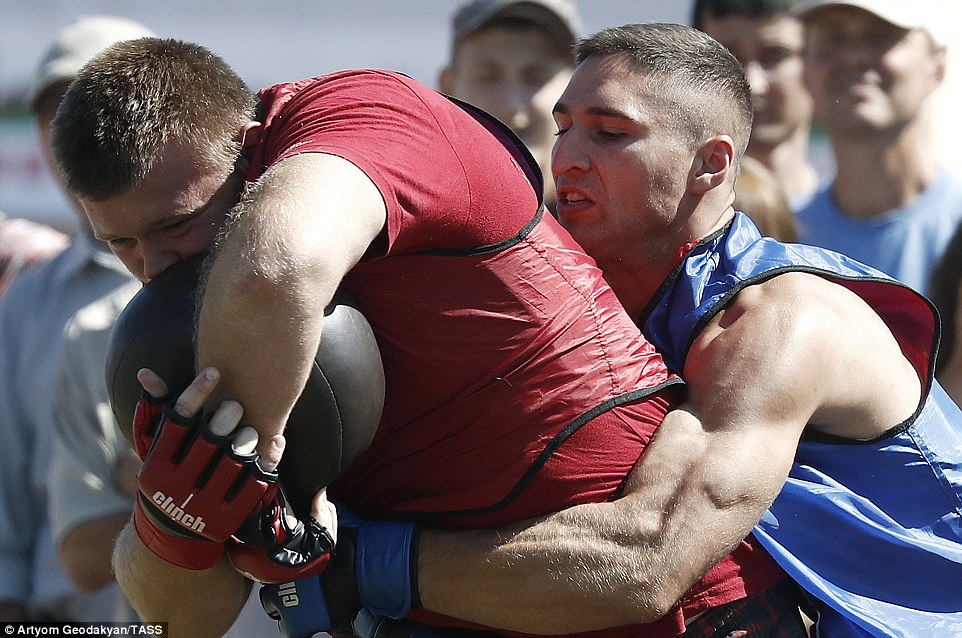 Football blended with wrestling: A ‘rusmyach’ competitor tries to grapple his opponent to the floor and rob him of the ball 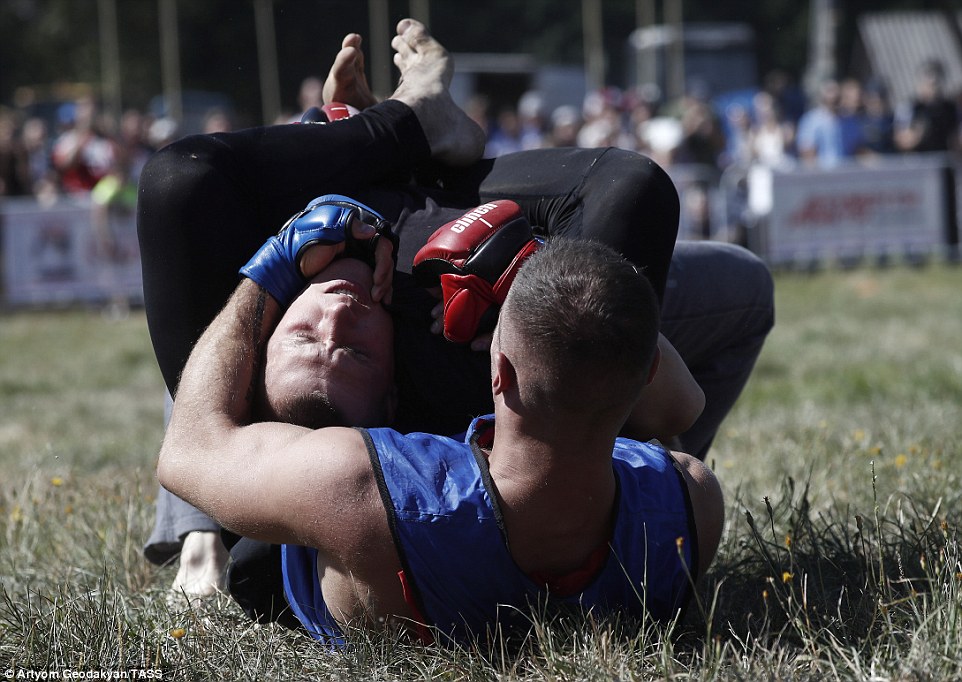 Ruthless: A ‘rusmyach’ participant shows no mercy as he locks his opponent in a chokehold with his legs during the match 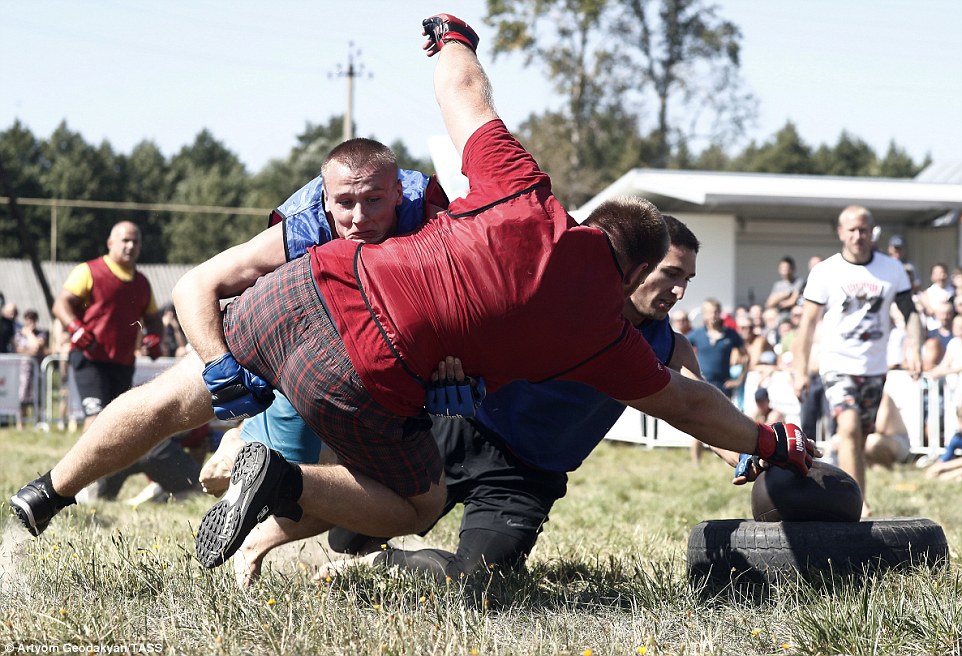 Goal? A member of the red team in the ‘rusmyach’ is tackled to the floor by the blue team as he tries to score 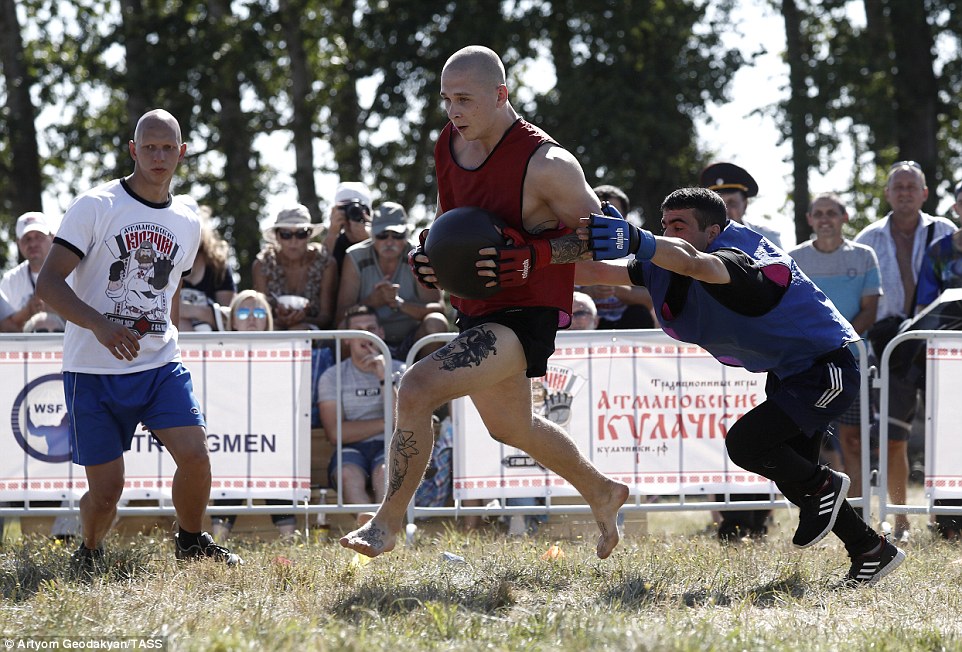 Nimble: A ‘rusmyach’ player, who bravely opted to go barefoot during the match, outpaces a member of the opposing team 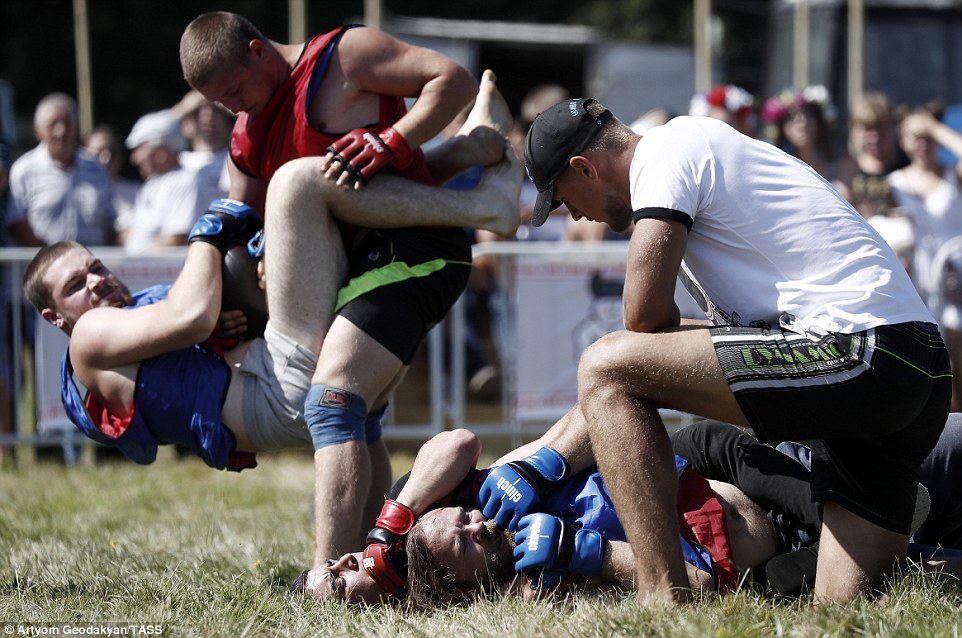 ‘Rusmyach’ players grapple in the grass during the bloodthirsty game. The player holding the ball (left) locks his legs around an opposing player who tries to wrestle it out of his grip 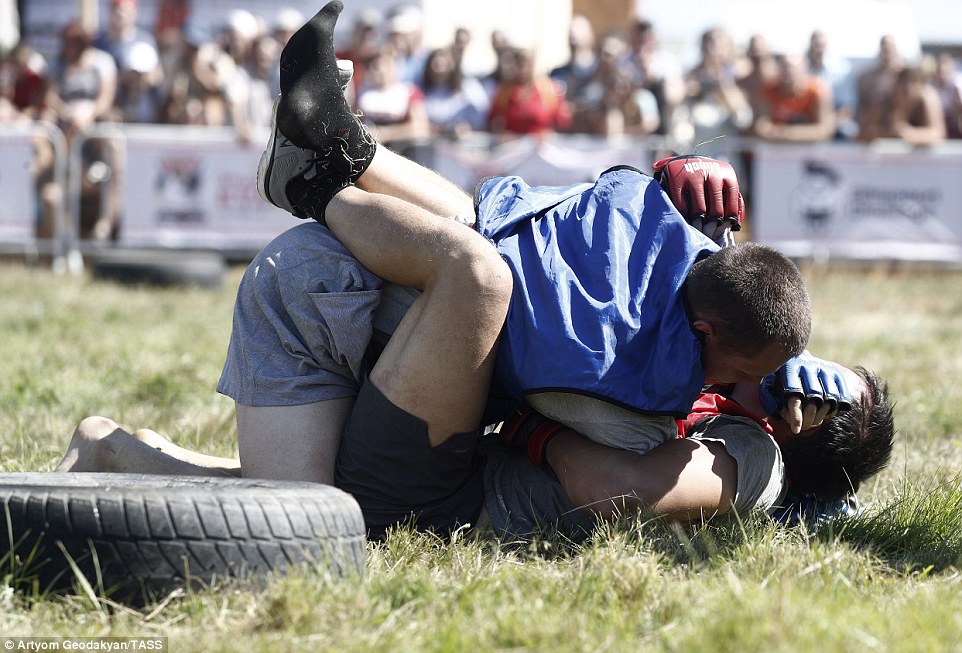 Tenacious: One player stops at nothing to get the ball off the opposite team, lunging at the opponent and pushing his face with the palm of his hand 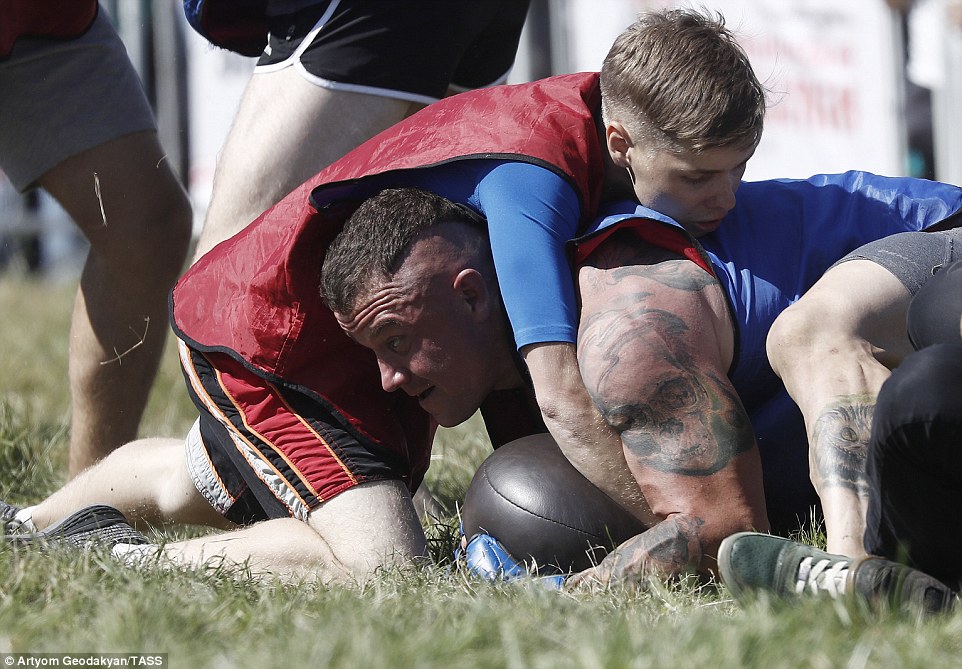 Eyes on the prize: A muscular man with a determined gaze refuses to relinquish the ball during the ‘rusmyach’ 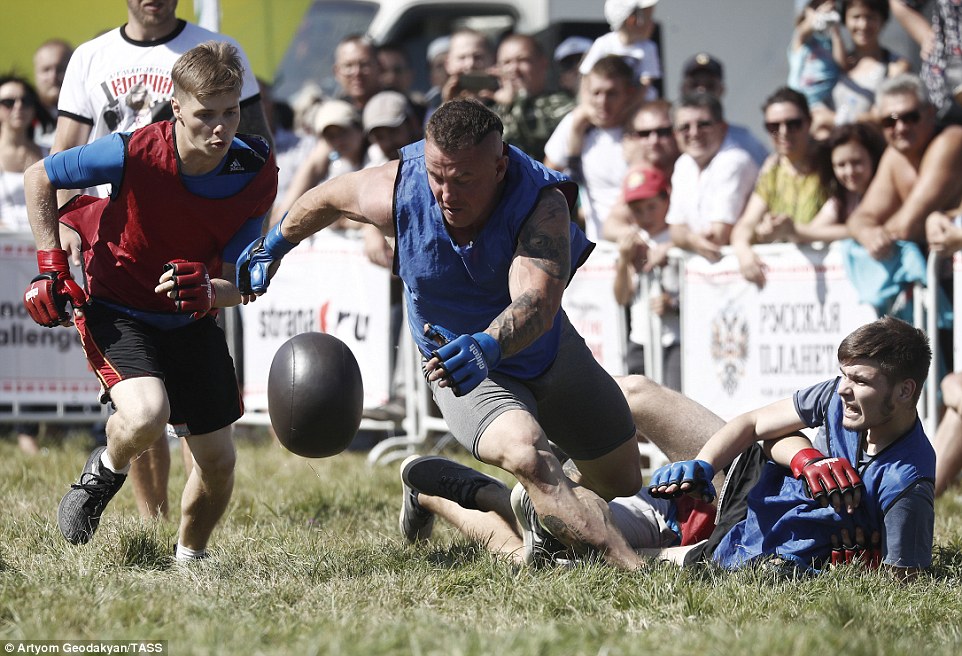 All to play for: Competitors lunge towards the ball during the ‘rusmyach’ match after it is flung free from the grappling players 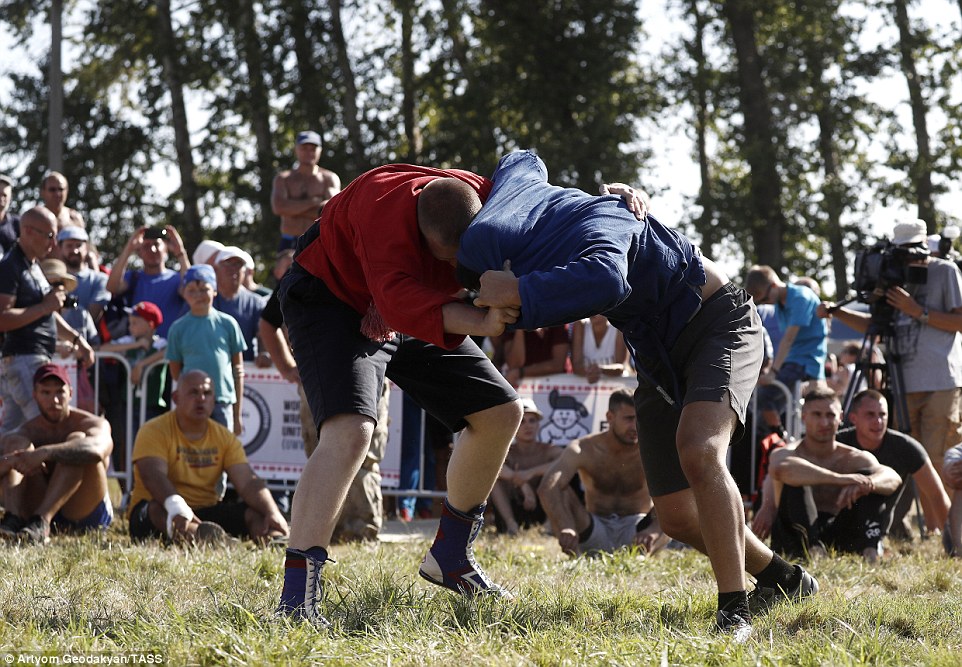 Locking horns: Spectators watch from the sidelines and take pictures as two wrestlers go head to head at the festival 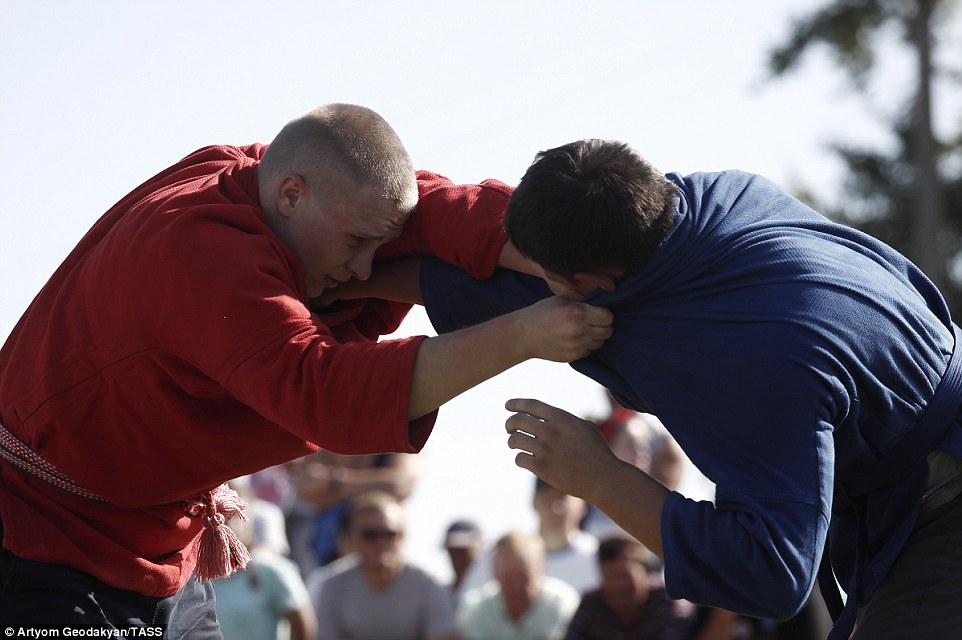 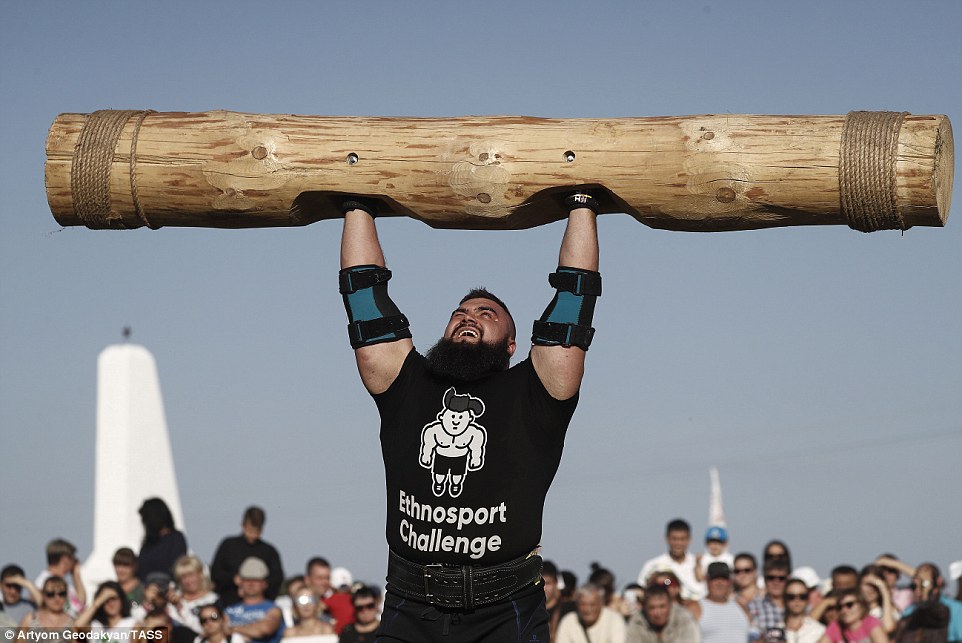 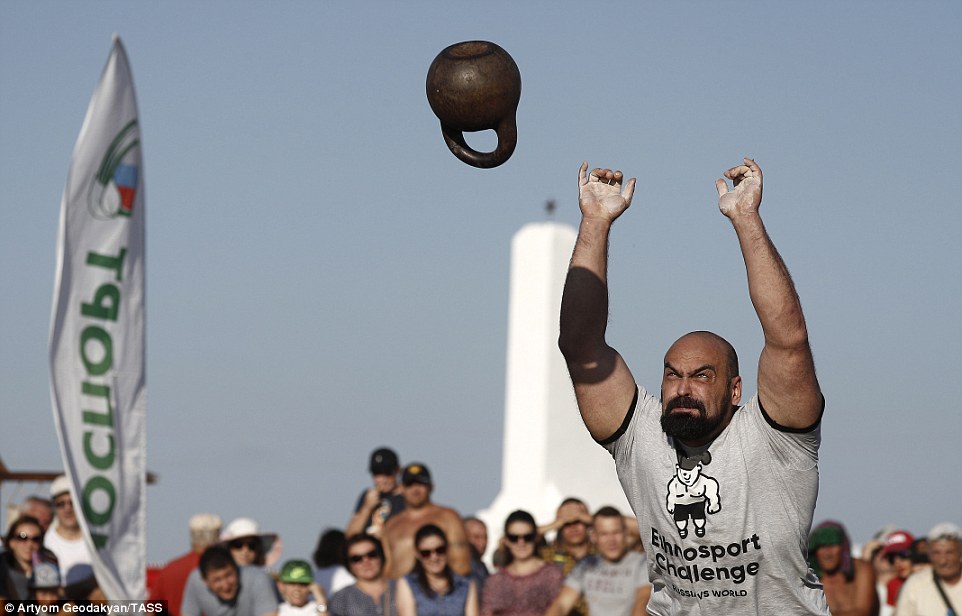 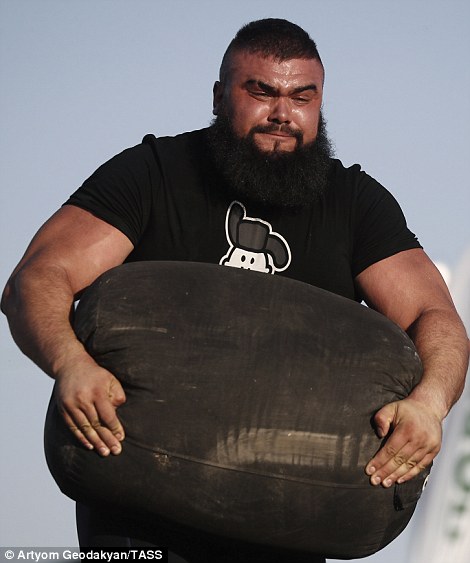 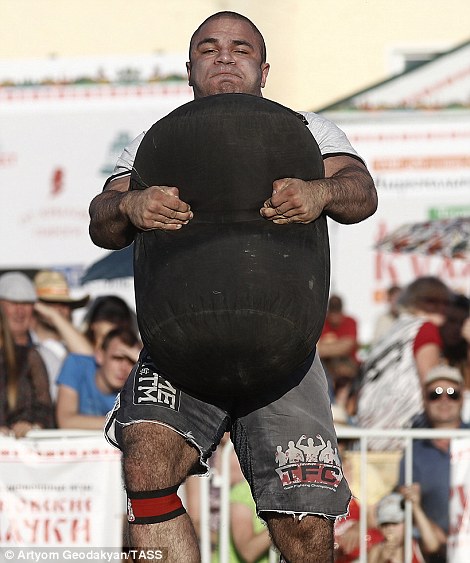 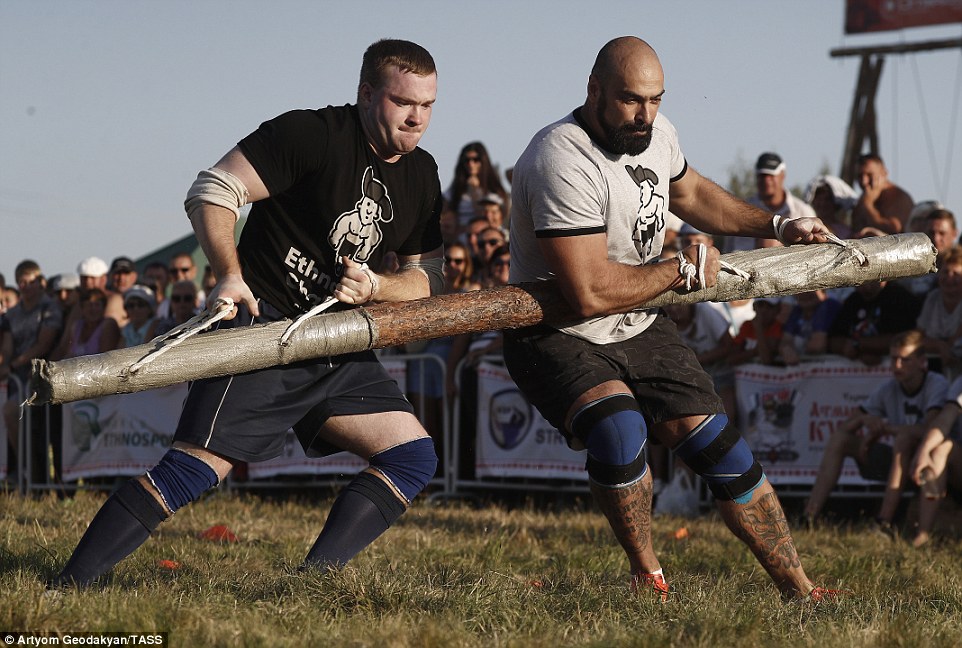 Two strongmen go head to head in a folk game similar to tug of war. They try to drive the opposing player across the lawn using handles fed through a thin log 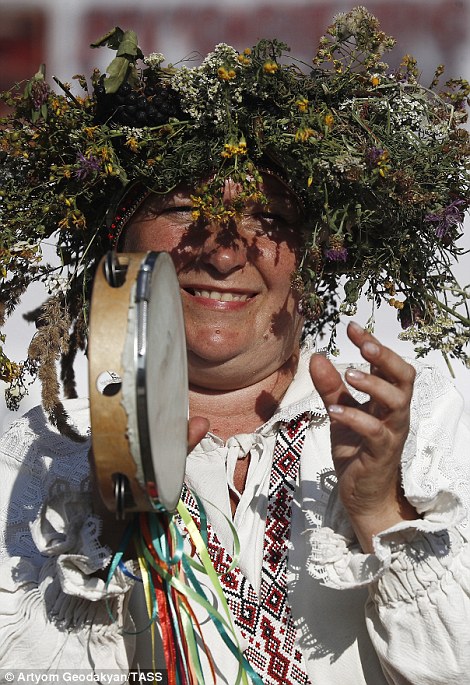 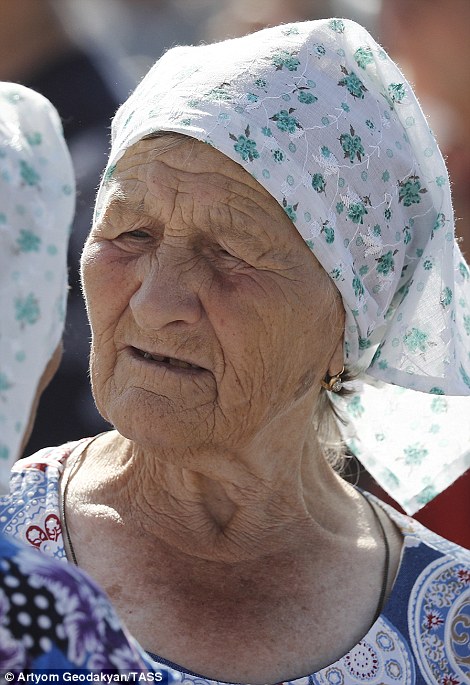 Cheering them on: A woman wearing traditional folk dress plays a tambourine (left) while an elderly lady chats with a friend during the festival (right)