Russian-backed hackers gained access to web sites and voter registration systems of seven states just before the 2016 presidential election, it was reported on Tuesday.

The claims being made by officials in the US intelligence community were reported by NBC News.

The officials say that these states were not told at the time that their databases were being targeted by Russia.

Despite the breach by Russian-backed hackers, the covert effort did not have any impact on the vote count, NBC News reported.

Americans vote at a polling station in Chicago on November 8, 2016. Russian-backed hackers gained access to web sites and voter registration systems of seven states just before the 2016 presidential election, it was reported on Tuesday

The extent of the Russian penetration varied, with some hackers gaining access to voter registration databases.

While federal and state officials agree that the breach had no practical impact on the elections, the US intelligence community believes that these states were ‘compromised’ – meaning that their systems had been breached by covert operatives.

Despite the findings of the US intelligence community, six of the seven states say they conducted their own cyber investigations.

Those probes failed to turn up evidence of a hack, according to NBC News.

The only state that has acknowledged coming under ‘malicious cyberattack’ is Illinois, where officials say that voter rolls were accessed but nothing was altered.

Earlier this month, NBC News reported that Russian hackers targeted the voter registration rolls of 21 states during the 2016 presidential election. 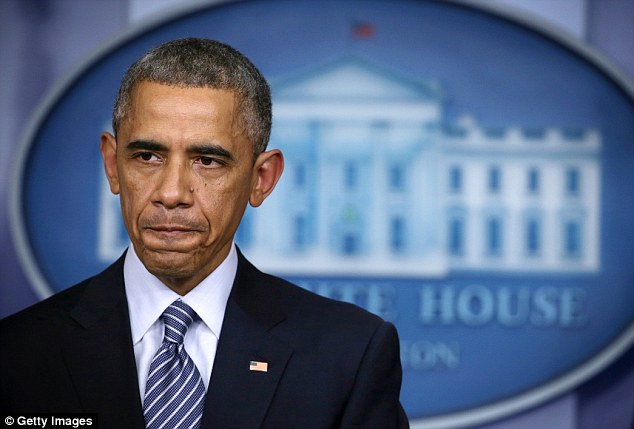 Jeanette Manfra, head of cybersecurity at the Department of Homeland Security, spoke with NBC News and said that of the states targeted, the Russians were able to gain access to the rolls of a ‘small number’.

The fear is that if hackers can get into the voter registration rolls, they can remove voters, causing chaos on Election Day and potentially swinging elections.

The revelations about the extent of Russian hacking were first picked up by US spies during the waning days of the Obama administration.

Officials have disagreed as to whether Barack Obama did enough to either deter Russia from attempting to hack into the elections or adequately punished the Russians after the fact.

‘I think the Obama administration should have been doing much more to push back against the Russians across the board,’ said Juan Zarate, a former deputy national security adviser for combating terrorism under President George W. Bush.

‘I think the US was very meek and mild in how we responded to Russian aggression.’

But Obama’s then-chief of staff, Denis McDonough, denied this.

‘The administration took a series of steps to push back against the Russians to include far-ranging sanctions, diplomatic steps to push people associated with the Russian effort out of this country and also warning our friends and allies,’ he said. 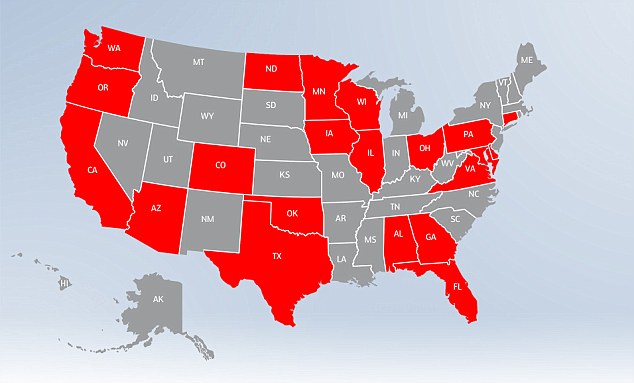 Russian hackers targeted the voting registration rolls in these 21 states. US intelligence officials said on Tuesday that they managed to breach the systems of seven states – Alaska, Arizona, California, Florida, Illinois, Texas, and Wisconsin

A top intelligence official said Tuesday that the US response to Russian meddling and disinformation campaigns has not been strong enough to deter Moscow’s activities.

‘I believe that President Putin has clearly come to the conclusion that there’s little price to pay and that therefore, “I can continue this activity,”‘ Adm. Mike Rogers told Congress.

‘Clearly what we have done hasn’t been enough.’

Rogers, director of both the US Cyber Command and the National Security Agency, said he’s taken steps to respond to the threat, but that neither President Trump nor Defense Secretary James Mattis has granted him any additional authorities to counter Russian efforts to sow discord in the United States.

‘I’ve never been given any specific direction to take additional steps outside my authority. I have taken the steps within my authority, you know, trying to be a good, pro-active commander,’ Rogers said at a Senate Armed Services Committee hearing.

‘I have not been granted any additional authorities,’ he added.

‘Nobody is denying him the authority,’ Huckabee Sanders said.

‘I can tell you that we are taking a number of steps to prevent this and we are looking at a variety of other ways that we’re going to continue to implement over the coming weeks and months,’ Huckabee Sanders added during Tuesday’s press briefing.

Sen. Jack Reed of Rhode Island, the ranking Democrat on the committee, said Rogers’ testimony was an indication that the US had not yet taken action against Russia for its meddling. 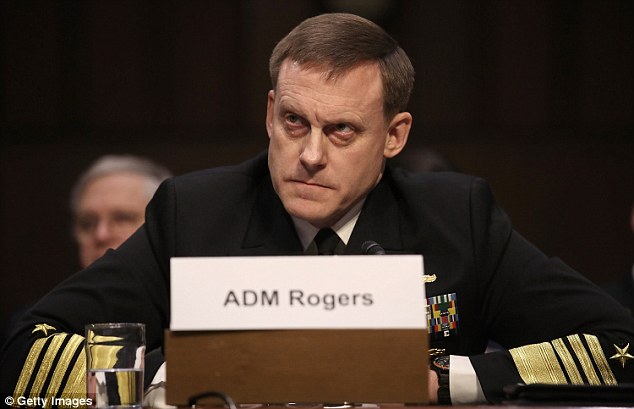 Adm. Mike Rogers, commander of the United States Cyber Command and director of the National Security Agency, made a fresh warning about Russian meddling when he appeared before the Senate Armed Services Committee on Tuesday

Rogers said he didn’t fully agree with the characterization that the U.S. was just sitting back and waiting.

But he said: ‘It’s probably fair to say that we have not opted to engage in some of the same behaviors that we are seeing’ from Russia.

Rogers said he doesn’t have the day-to-day authority to try to deter Russian activities at their source.

He said that authority is held by Trump and Mattis.

‘There are some things I have the authority to do and I’m acting on that authority,’ he told lawmakers.

He said US sanctions and recent indictments of Russians have had some impact.

But Rogers said: ‘It certainly hasn’t generated the change in behavior that, I think we all know we need.’

Rogers is retiring and his appearance before the committee was expected to be his last.