The anonymous ‘professor’ who allegedly tried to facilitate a meeting between the Trump campaign and Russian officials has been identified as Joseph Mifsud, a ‘diplomacy’ expert from Malta who runs a training center for prospective ambassadors in London.

Federal prosecutors say the professor – who was not named in court documents but was identified as Mifsud by the Washington Post on Monday – had high-level ties in Russia and helped introduce Trump campaign advisor George Papadopoulos to an individual connected to the Russian Ministry of Foreign Affairs in April 2016.

That Russian official was identified in reports on Monday as Ivan Timofeev, a program director at the Kremlin-backed Russian International Affairs Council.

According to prosecutors, the professor also passed on information to Papadopoulos about ‘dirt’ the Russians had uncovered on Clinton, including ‘thousands of emails’ they collected.

Meet the professor: Jospeh Mifsud (right) runs the London Academy of Diplomacy and helped introduced George Papadopolous, the Trump campaign aide, to a Russian official. He has other ties to Moscow: In July he was phtoographed with a Russian diplomat based at its London embassy, Ernest Chernukhin 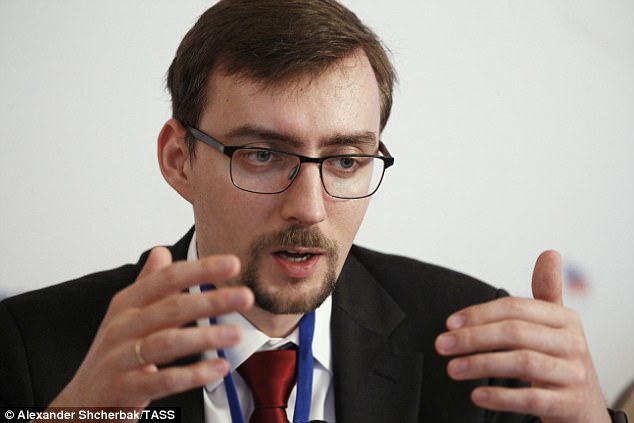 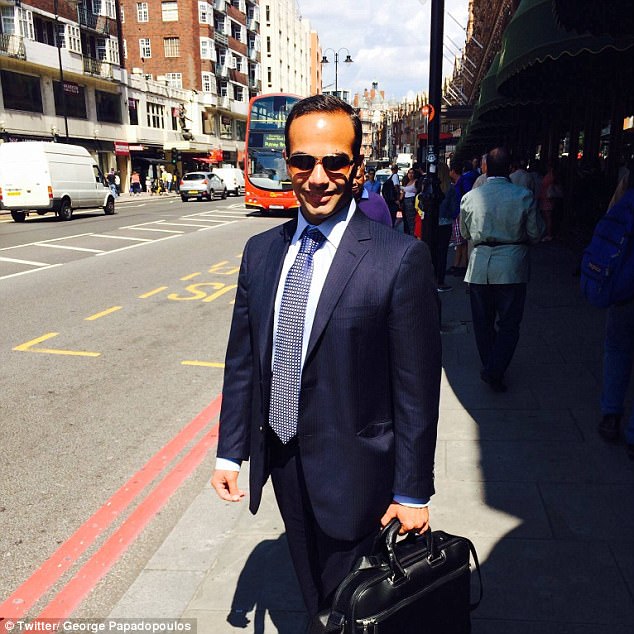 In London: George Papadopoulos posted a photo outside department store Harrods during a trip to the UK. He has now pleaded guilty October 5 to lying to the FBI’s Russia collusion probe 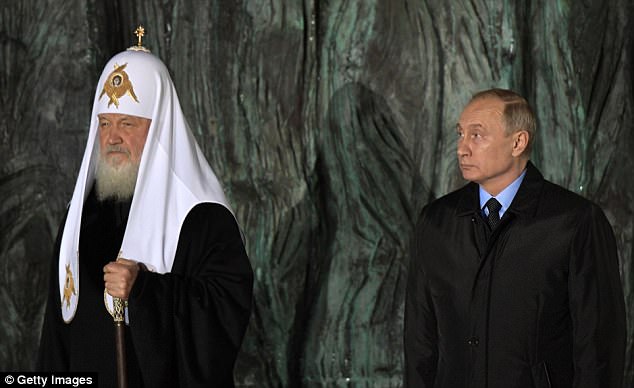 Not my niece: Vladimir Putin was not the uncle of the woman who Papadopolous corresponded with and lied to the FBI about

Prosecutors say Papadopoulos also tried to use the professor’s Russian connections to set up a meeting between then-candidate Donald Trump and Vladimir Putin in the spring of 2016.

But the ill-fated attempt at diplomacy never got off the ground – and it has now resulted in federal charges against Papadopoulos, after authorities say he lied to investigators working for special counsel Robert Mueller.

Prosecutors said Papadopoulos misled investigators who were probing possible collusion between the Trump campaign and Russian officials in January, downplaying his efforts to arrange meetings with Russian officials.

According to prosecutors, Papadopoulos reached out to Mifsud after getting tapped as a foreign policy advisor for the Trump campaign in early March 2016, because he was under the impression Mifsud had close ties to the Russian government.

Mifsud, a ‘diplomacy’ expert who specializes in energy policy issues, worked for the Malta ministry of foreign affairs and the education ministry in the 1990s.

He was recently listed as director at the London Centre of International Law Practice, but his biography page on the website was removed without explanation two days ago.

The biography described Mifsud as ‘the founding father of the term ‘Academic Diplomacy’,’ and said his research is focused on the European Union ‘especially accession and enlargement.’

Mifsud currently serves as honorary director of the London Academy of Diplomacy, a diplomatic training institute associated with the University of East Anglia, outside London, and the University of Stirling, in central Scotland.

He has described the academy as ‘one of the best diplomatic academies in the world’ and says it teaches students ‘how to be flexible in thinking, how to engage with the business community and how to act at different levels, from the highest level of diplomacy to more mundane people-to-people skills, as well as the ability to think strategically and geopolitically.’

Mifsud has also spoken about the importance of diplomatic ‘branding’ in the age of Twitter and the importance of establishing connections between ambassadors and businessmen. In a 2014 interview with the Washington Diplomat he said his role model is Henry Kissinger, who he called ‘a fantastic diplomat.’ 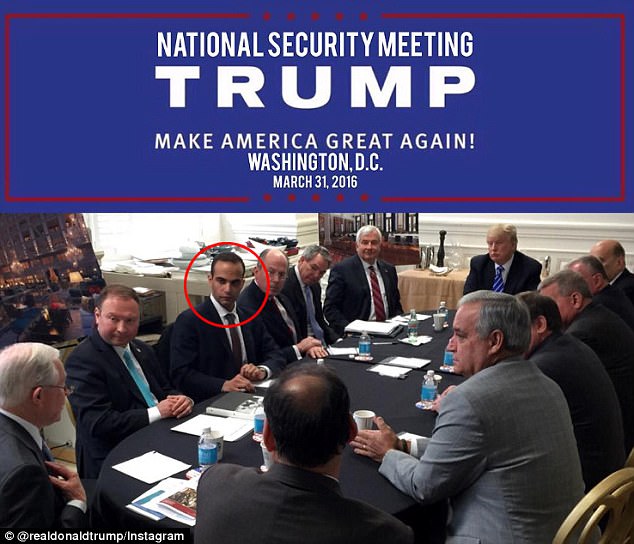 Inner circle: Trump praised Papadopolous as an ‘excellent guy’ and he was part of a meeting about ‘national security’ at the same time as he was corresponding with the Russians 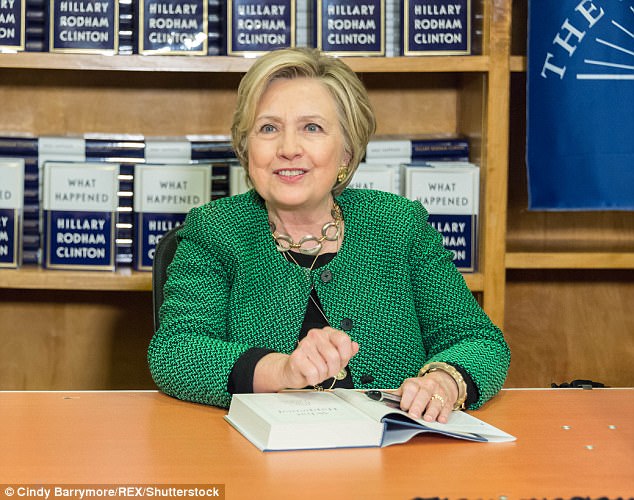 What happened: Papadopolous was offered ‘dirt’ on Hillary Clinton by Mifsud at a meeting in London, but he couldn’t interest his superiors in meeting Russian officials themselves or paving the way for a Putin-Trump summit, possibly also in London

On March 24, 2016, Papadopoulos met with the professor in London to discuss setting up a meeting between Trump and Putin. The professor reportedly brought along a woman who Papadopoulos believed was Vladimir Putin’s niece.

In the weeks that followed, Papadopoulos, the Russian woman, and the professor allegedly exchanged emails about arranging meetings with officials in Russia.

‘As mentioned we are all very excited by the possibility of a good relationship with Mr. Trump. The Russian Federation would love to welcome him once his candidature would be officially announced,’ wrote the Russian woman in one email to Papadopoulos.

The Russian International Affairs Council was established by the Russian government in 2010 and is funded by the ministry of foreign affairs.

Mifsud and Timofeev have a working relationship dating back at least several years.

In 2014, Timofeev met with Mifsud in London to discuss a collaboration between the Russian International Affairs Council and the London Academy of Diplomacy, where Mifsud served as honorary director.

Both Timofeev and Mifsud also spoke at the Russian government-sponsored Valdai Discussion Club on April 18, 2016.

The Trump advisor and the MFA-linked Timofeev went on to have ‘multiple conversations over Skype and email’ about arranging meetings between the campaign and Russian officials, according to prosecutors.

As the discussions continued, Papadopoulos pressed other Trump campaign officials to consider the proposed meeting between Trump and Putin.

He told one senior campaign official by email that he wanted to ‘to discuss Russia’s interest in hosting Mr. Trump. Have been receiving a lot of calls over the last month about Putin wanting to host him and the team when the time is right.’

Around the same time, Mifsud allegedly passed on a tip to Papadopoulos about the Russian government tampering in the presidential election.

During a breakfast meeting on April 26, 2016, the professor reportedly told Papadopoulos that ‘They [the Russians] have dirt on [Clinton]’; and ‘they have thousands of emails.’

But Papadopoulos’s diplomatic efforts seemed to draw little interest from others in the Trump campaign.

Campaign director Corey Lewandowski simply ignored Papadopoulos’s messages when he received them in early May.

Lewandowski’s successor, Paul Manafort, seemed more open to the idea but nixed the possibility of Trump attending a meeting with Russians.

‘We need someone to communicate that [Trump] is not doing these trips,’ Manafort wrote to another Trump aide in May. ‘It should be someone low level in the campaign so as not to send any signal.’

On June 19, Papadopoulos tried again to get campaign approval for a meeting with Russian officials, offering to attend it himself if Trump couldn’t make it.

‘The Russian ministry of foreign affairs messaged and said that if Mr. Trump is unable to make it to Russia, if a campaign rep (me or someone else) can make it for meetings?’ wrote Papadopoulos to another Trump campaign official on June 19.

‘I am willing to make the trip off the record if it’s in the interest of Mr. Trump and the campaign to meet specific people.’

The meeting did not occur, and Papadopoulos’s exchanges with his Russian connections appeared to stop at the same point, according to prosecutors.