Ryanair passenger, 70, who hurled racist abuse at passenger will not be prosecuted

Ryanair passenger, 70, who called a Windrush pensioner, 77, an ‘ugly black b*****d’ as he bombarded her with racial abuse on a flight from Barcelona will not face prosecution

A pensioner who unleashed a racist tirade at a black woman on a Ryanair flight will not be prosecuted.

David Mesher, 70, hurled vile abuse at 77-year-old Delsie Gayle, calling her an ‘ugly black b*****d’ during a row on a plane in Barcelona.

But Mesher later claimed he was not racist and said he lost his temper during a dispute over seats on the aircraft last October.

Mesher (pictured, right) hurled racist abuse at Delsie Gayle (left) in a vile tirade that went viral but lawyers say he will not face prosecution

A fellow passenger filmed him abusing Ms Gayle and flight staff then reported him to Essex Police when the flight touched down at Stansted.

After a four-month UK police probe, Mirror Online has revealed that the investigation has been shelved because lawyers ruled the offence can only be prosecuted in Spain. 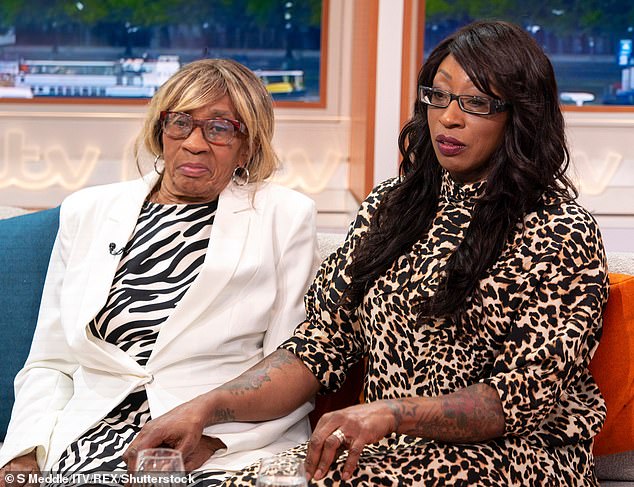 Ms Gayle (pictured with her daughter, Carol, on Good Morning Britain) said that the abuse she suffered left her feeling depressed

Spanish police are understood to have passed a file to prosecutors in the country after Essex Police said that it sought advice from the Crown Prosecution Service.

Windrush pensioner Ms Gayle said in the aftermath of her ordeal that she felt ‘really depressed about it’, adding: ‘I go to my bed and say, “What have I done?”

‘I haven’t done anything for you to attack me. Because of the colour of my skin I was abused like that.’

Mesher appeared on Good Morning Britain shortly after the row and insisted that he was not racist.

‘I’m not a racist person by any means and it was just a fit of bad temper at the time,’ he said.