Ryder Cup Europe have released a bombshell statement confirming that Henrik Stenson has been stripped of his role as captain for the 2023 tournament after opting to join the Saudi-backed LIV series.

Stenson has confirmed his decision to defect to the new mega-rich breakaway tour in a statement on social media, after Sportsmail reported on Tuesday night that the decision was set to be announced this week, with the Swede set to take a sign-on fee in the region of £40million.

Before his own announcement, Ryder Cup Europe said in a statement on their website: ‘Henrik Stenson’s tenure as Captain of Team Europe for the 2023 Ryder Cup at Marco Simone Golf and Country Club in Rome, Italy from September 25 – October 1, 2023, has been brought to an end with immediate effect.

‘In light of decisions made by Henrik in relation to his personal circumstances, it has become clear that he will not be able to fulfil certain contractual obligations to Ryder Cup Europe that he had committed to prior to his announcement as Captain on Tuesday March 15, 2022, and it is therefore not possible for him to continue in the role of Captain.

‘Confirmation of the new 2023 European Ryder Cup Captain will be made in due course. Ryder Cup Europe will be making no further comment on any aspect of the process until that time.

Stenson later issued a statement confirming he was joining LIV Golf and said while he said he disagreed with the decision to remove him as captain ‘for now it is a decision I accept’. 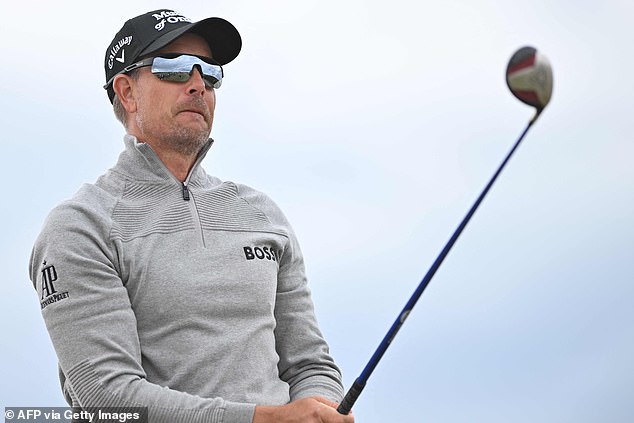 Stenson, pictured at the 150th Open at St Andrews last week, is the latest big name to join LIV 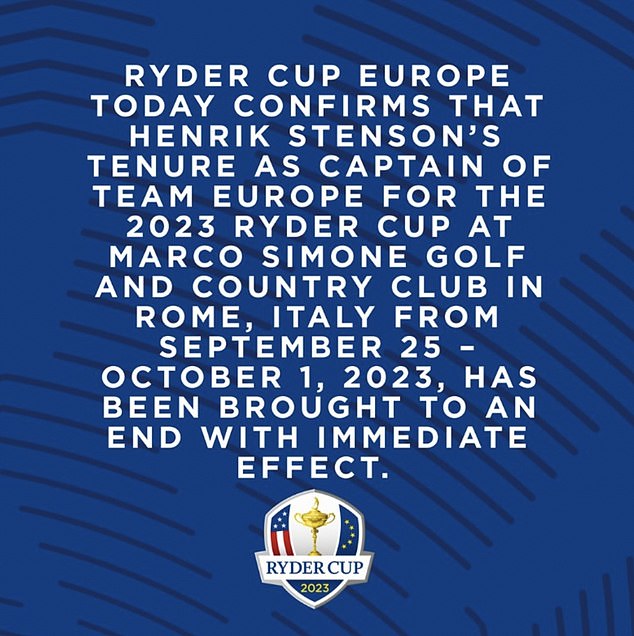 ‘Unfortunately my decision to play in LIV events has triggered Ryder Cup Europe to communicate that it is not possible for me to continue in my role as Ryder Cup captain,’ he wrote.

‘This is despite me making specific arrangements with LIV golf, who have been supportive of my role as captain, to ensure I could fulfil the obligations of the captaincy.

‘While I disagree with this decision, for now it is a decision that I accept.

‘I am hugely disappointed to not be allowed to continue in my role but wish you all the best in your ongoing preparations.’

It is as yet unclear whether the Ryder Cup will allow players to participate for Team USA and Team Europe if they are also playing on the LIV Golf tour, but this is the first stand made by one of the teams in terms of their captaincy.

The likes of Lee Westwood, Ian Poulter, Sergio Garcia and Graeme McDowell – all legends of previous European success at the Ryder Cup – have all confirmed their defection to LIV in recent weeks, sparking huge controversy.

On the American side, Phil Mickelson, Dustin Johnson, Bryson Dechambeau, Patrick Reed and Brooks Koepka are among the names participating in the breakaway league, leaving a potentially disastrous situation for the Ryder Cup in 2023. 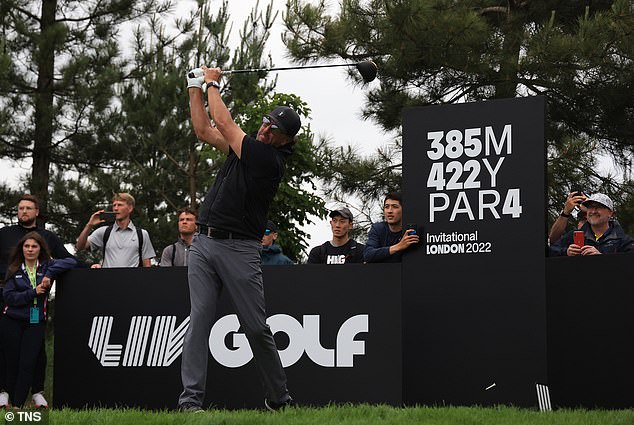 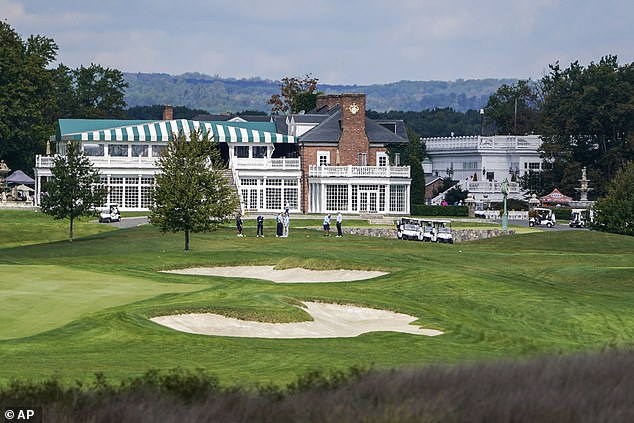 Donald Trump’s course in Bedminster, New Jersey will be next to hold a LIV competition

Tournament organisers are likely to be left with a huge decision over whether to allow LIV players to participate, or to take a hard-line stance and ban them completely – therefore leaving a whole host of big names out of the event in Italy.

Stenson’s decision to join the LIV Golf tour is a huge coup for the Greg Norman-fronted series, perhaps their biggest to date given Stenson’s previous Ryder Cup commitments.

The 46-year-old had only signed a contract with Ryder Cup Europe in the last four months, which specifically contained a clause forbidding him to join a breakaway tour like LIV.

It read: ‘The successful candidate will be expected during his tenure to commit to supporting the Ryder Cup and the DP World Tour exclusively, and therefore, by extension, not supporting or promoting other properties (including, without limitation, other Tours, Leagues, Series or Competitions).’

It is also understood that Open Championship winner Cameron Smith and 2021 Masters champion Hideki Matsuyama could be the next two defectors to the new tour.

Smith was asked specifically about the potential switch after winning the 150th Open at St Andrews last week, but he gave a frosty response and refused to answer questions. 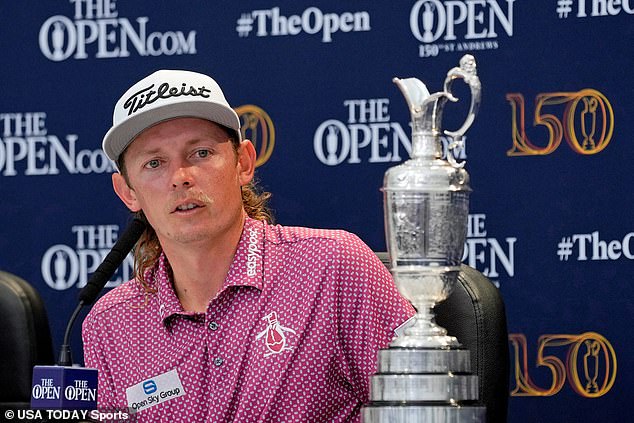 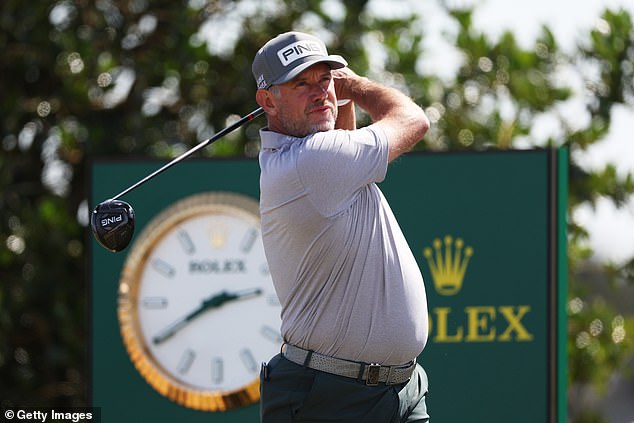 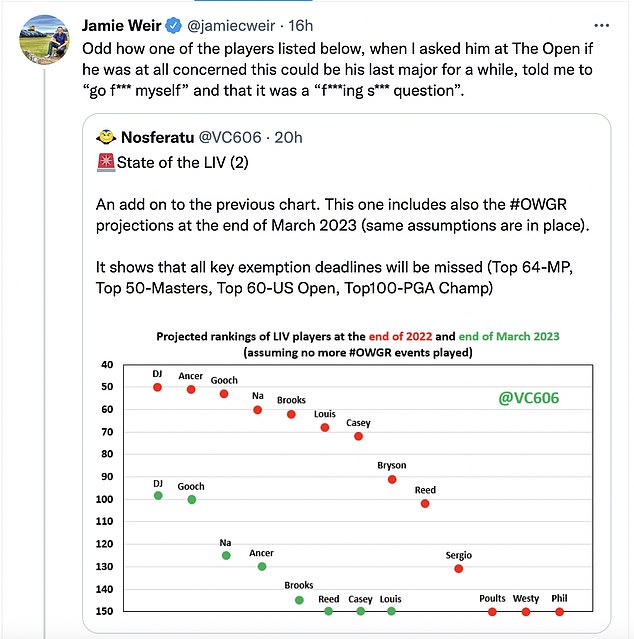 Westwood says it wasn’t him who made the comment, but he too questioned Sky’s loyalties

A tetchy Westwood, meanwhile, has become the latest LIV Golf defector to hit out at media coverage of the Saudi-backed breakaway series, after a Sky Sports reporter was told to ‘go f*** himself’ at The Open last week.

The decision of some of the world’s top golfers to take a massive payday and join the new LIV tour has been hugely controversial, and was the talk of the town at St Andrews for the 150th Open Championship.

Westwood is among the big names who have swapped the DP World Tour for the Saudi series, and he was angered by a Sky Sports journalist probing players about their decision.

In response to reports that Jamie Weir – Sky’s resident golf reporter – had been told to ‘go f*** himself’ after asking a ‘f***ing s*** question’ to an unnamed LIV defector, Westwood was keen to distance himself from social media rumours it was him, while also siding with his colleague.

Taking to Twitter, Westwood replied: ‘It wasn’t me but I did overhear the conversation in question. Jaimie [sic] works for Sky. They cover the PGA & DPWT. Where do you think their loyalties lie and what their agenda is?’

A five-way race is developing for the European Ryder Cup captaincy after Henrik Stenson was stripped of the role on Wednesday.

In one of the most dramatic sagas in the history of the Ryder Cup, Stenson is believed to have breached the contract he only signed in March by agreeing to join the Saudi-backed LIV series.

DP World Tour chief executive Keith Pelley and European Ryder Cup director Guy Kinnings had attempted to talk Stenson out of the switch on Tuesday, but with the 46-year-old resolved to accept an offer north of £30million from Greg Norman’s breakaway group, those efforts have failed.

Stenson is expected to be announced as a LIV player on Thursday. With only 14 months until the match against the US in Rome, Europe is now frantically considering replacements.

Sportsmail understands the shortlist includes Cup veterans Luke Donald, Robert Karlsson and Paul Lawrie, who were all in the running when Stenson was selected.

The list also features Stenson’s vice-captains Thomas Bjorn and Edoardo Molinari, though the latter is considered less likely on the grounds of Cup experience. Bjorn, the winning captain from 2018, is known to have a number of backers, as does Donald. 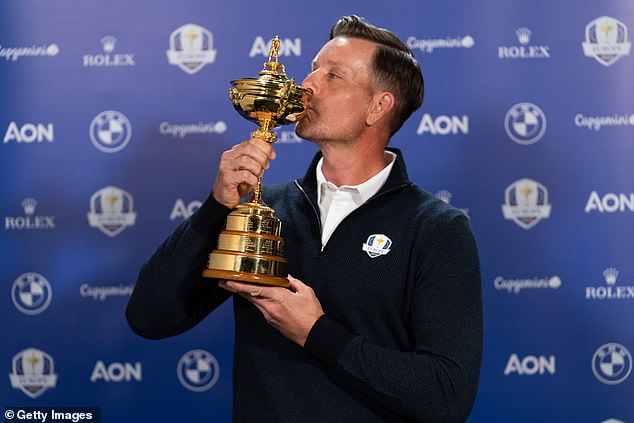 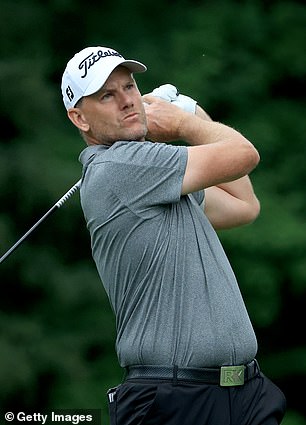 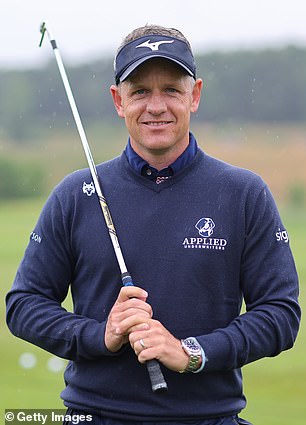 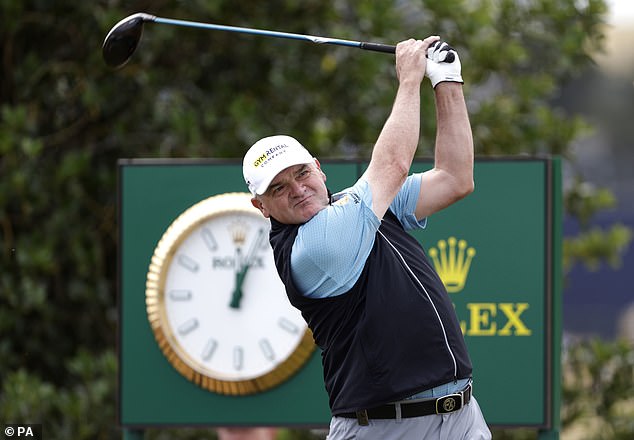 The situation around Stenson has been rumoured in golf for months, including around the time of his appointment, which he described as a ‘dream come true’.

That he has now joined the gold rush to the LIV series ranks as a seismic disruption in a sequence of many that has hit the sport since its formation.

In rubber-stamping Stenson’s departure, Ryder Cup Europe said in a statement that they ‘confirm Henrik Stenson’s tenure as Captain of Team Europe for the 2023 Ryder Cup at Marco Simone Golf and Country Club in Rome, Italy has been brought to an end with immediate effect. 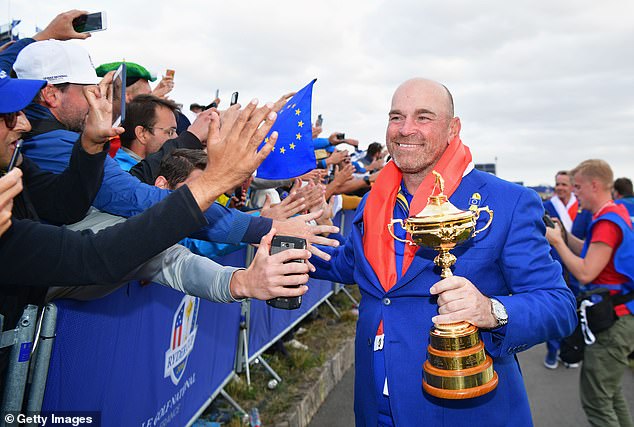 Thomas Bjorn has already tasted success as a Ryder Cup winning captain, back in 2018 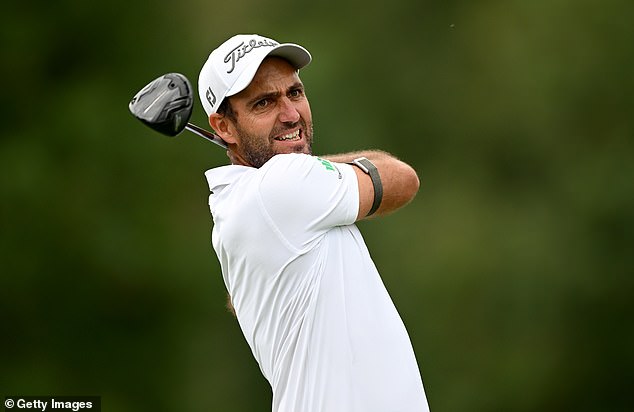 ‘In light of decisions made by Henrik in relation to his personal circumstances, it has become clear that he will not be able to fulfil certain contractual obligations to Ryder Cup Europe that he had committed to prior to his announcement as captain on Tuesday March 15, 2022, and it is therefore not possible for him to continue in the role of captain.

‘Confirmation of the new 2023 European Ryder Cup captain will be made in due course.’

Sportsmail understands no announcement will be made on the new captain imminently, though it could be decided next week.