David and Joss Sackler, a fixture in New York’s high society have decided to flee the Big Apple and move to Florida after being shunned over their alleged role in the opioid crisis.

The family are accused of deceiving patients and doctors about the risks of opioids and pushing prescribers to keep patients on the drug longer. 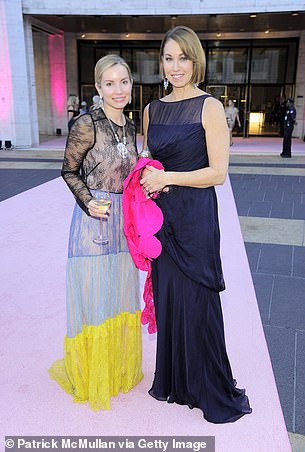 So far, eight members of the Sackler family have been named in lawsuits brought in several states. Joss and David Sackler, Manhattan socialites are planning to flee to Florida. Pictured: Mortimer Sackler and Jacqueline Sackler in September 2006, and Joss Sackler and Alison Bruhn in September 2017 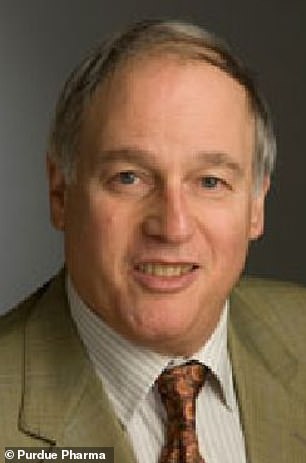 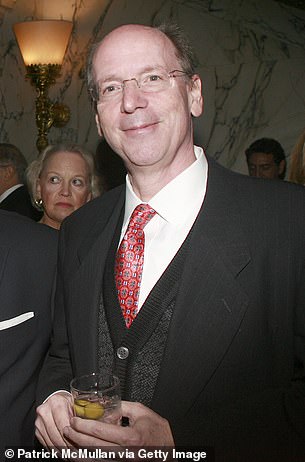 The Sacklers are one of the wealthiest families in the world, worth around $13 billion, in part because of sales of the drug.

Purdue reportedly paid $4 billion to the Sackler family between 2008 and 2015.

Until the scandal broke, the Sacklers were a highly respected family who mingled with the cream of New York society and fixtures on the city’s social scene.

The couple were big art patrons and donors to major museums including the Met, which named a wing after them.

Joss also founded an activewear line and a wine club.

But now the couple Now they are selling their $6.5 million Upper East Side apartment and heading south as they relocate to Palm Beach, Florida. 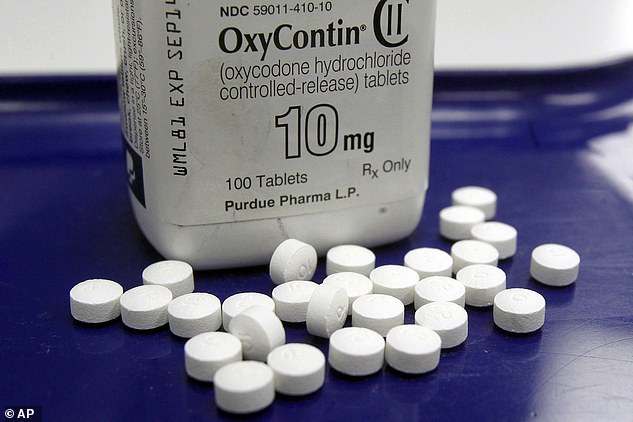 According to a 2005 study from the Washington University School of Medicine, by 2004, OxyContin became the most prevalent abused prescription opioid (file picture) 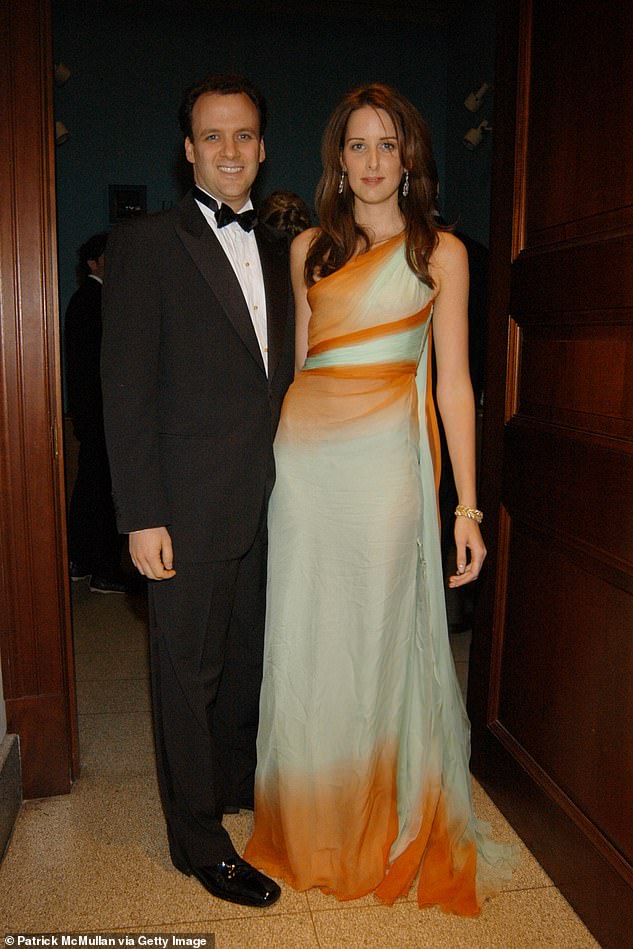 A growing number of institutions are refusing further donations or cutting ties with the Sackler family altogether due to their link to the opioid crisis. Pictured: Dr Mortimer Sackler (left) and  his wife Jacqueline Sackler attend The Winter Dance 2006 Desert Oasis in New York

‘Imagine if you had three young kids and were being accused of creating an opioid crisis . . . where would you rather live?’ a source said to Page Six.

‘They unfortunately symbolize all that is wrong with the epidemic. Their reputations are in the cesspool,’ said a ‘social insider’ allegedly told The New York Post.

‘There is a reluctance to hobnob and socialize [with] and openly stand next to the Sacklers. They aren’t being invited to small dinners on Fifth Avenue.’

Over the years, the Sacklers have gifted various institutions with generous detonation and, in turn, have had their names stamped on buildings.

There’s the Sackler Institute at Columbia University, the Sackler Center for Arts Education at the Solomon R. Guggenheim Museum and the Sackler Wing at the Metropolitan Museum of Art – and that’s just in New York.

But as Purdue Pharma and the Sacklers are getting dragged into more and more lawsuits, a growing number of institutions are refusing further donations – or cutting ties with the family altogether.

OxyContin was approved by the US Food and Drug Administration (FDA) in 1995 and made available in 1996.

Drug manufacturer Edwin Thompson told CBS’s 60 Minutes that when the FDA approved the drug, it was based on research that showed it was effective for ‘short-term’ use.

But, in July 2001, the FDA changed the label and broadened OxyContin use for those with more moderate and long-term pain such as arthritis.

According to a 2005 study from the Washington University School of Medicine, by 2004, OxyContin became the most prevalent abused prescription opioid.

Meanwhile, the opioid epidemic has led to more than 200,000 overdose deaths and forced hundreds of thousands of children away from addicted parents and into foster homes.

More than 47,000 people died from overdoses involving opioids in 2017.

Thousands of lawsuits have been brought against Purdue Pharma, particularly in New York and Massachusetts.

So far, eight members of the Sackler family have been named including Richard and Jonathan Sackler, sons of the late Raymond Sackler.

His widow Beverly and his grandson David have also been named.

Three children of the other founding brother Mortimer Sackler – Ilene, Kathe and Mortimer David Alfons – are all named as is his widow, Theresa.

Insiders reportedly told the Post that many Sackler family members view themselves as disconnected from the opioid crisis.

Yet, just earlier this year, it was revealed that Richard Sackler, then senior vice president of sales, told people when the prescription launched that it would be ‘followed by a blizzard of prescriptions that will bury the competition’.

Author Michael Gross, told the Post that Sacklers are bound to face even further backlash,

‘What you are seeing now is a much less forgiving environment for bad behavior,’ said Gross, author of Rogues’ Gallery: The Secret Story of the Lust, Lies, Greed, and Betrayals That Made the Metropolitan Museum of Art.

‘The laundering of reputations through philanthropy used to be a frictionless process. Now it’s a bumpy road and sometimes even detours lead to dead ends.’

In March, the National Portrait Gallery refused a grant of $1.3 million from the Sacklers.

And the Guggenheim, which has a wing with the family name on it, said it would no longer accept monetary gifts from the Sacklers.

In February, protesters descended on the museum and rained hundreds of scraps of paper designed to look like 80mg prescriptions down the Guggenheim’s central spiral

The Tate Museum in London also said it would not longer be accepting contributions from the Sacklers.

‘I wouldn’t accept donations from them,’ an anonymous member of ‘multiple museum boards’ told the Post. ‘The name is definitely sullied. And deservedly so.’ 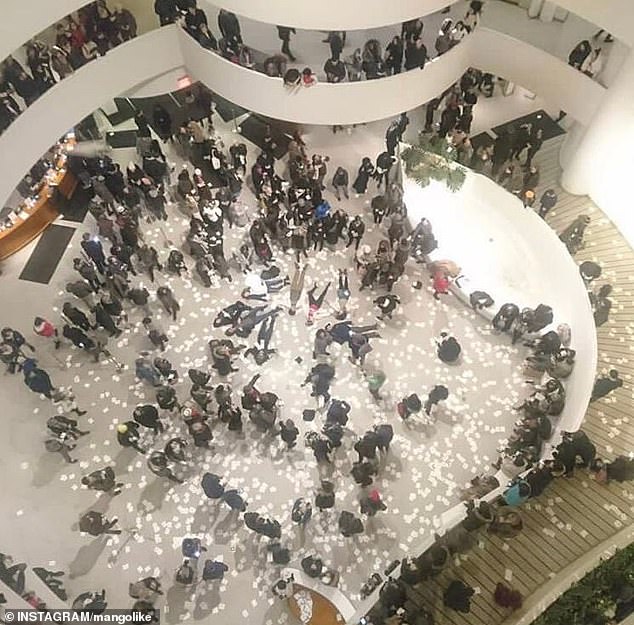 The Solomon R Guggenheim Museum, which has a wing with the family name on it, said it would no longer accept monetary gifts from the Sacklers 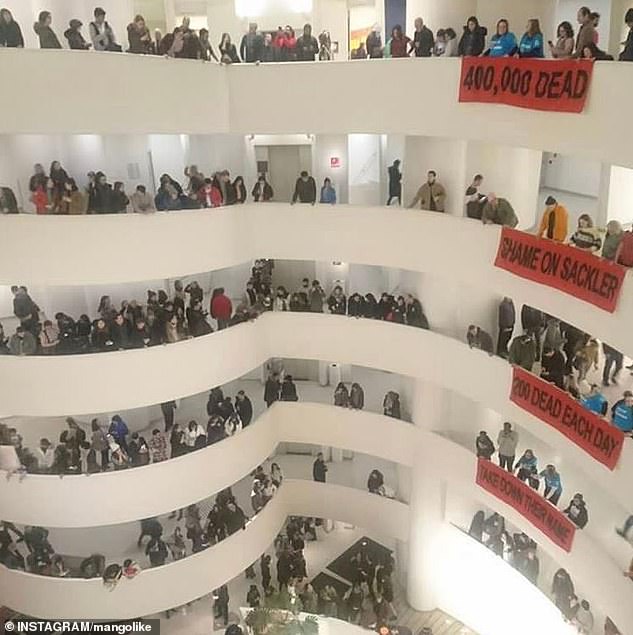 In February, protesters descended on the museum and rained hundreds of scraps of paper designed to look like 80mg prescriptions down the Guggenheim’s central spiral

Even some family members have been trying to get out from under the shadow that the lawsuits have cast on the Sacklers.

Elizabeth Sackler, whose father Arthur held a one-third option in Purdue said in a statement in January 2019 that the role her family’s company played in the opioid crisis is ‘morally abhorrent’ in a January 2019 statement.

She also argued that her father died in 1987, before OxyContin was produced, and that his option was sold to his younger brothers, the principal owners of Purdue Pharma a few months after his death.

‘None of [Arthur’s] descendants have ever owned a share of Purdue stock nor benefited in any way from it or the sale of OxyContin,’ Elizabeth said.