Emotions ran high as loved ones gathered to honor the life of 22-year-old Stephon Clark, an unarmed black father-of-two shot dead by Sacramento police in his grandparents’ backyard last week.

Stevante Clark, his distraught older brother, took over the mic from Alice Huffman of the California NAACP as she spoke during the funeral at Bayside of South Sacramento church on Thursday.

The 25-year-old led the crowd of hundreds to chant his dead sibling’s name, while vowing that the ‘Clark family will not be forgotten’.

As others tried to lead him away from the mic, Huffman said, ‘Everyone has their own way of grieving.’

But as Rev. Al Sharpton took to the mic to deliver the eulogy, he brought Stevante back to the stage. ‘You don’t tell people in pain how to handle their pain!’ Sharpton said.

‘You don’t tell people when you kill their loved one how to grieve. We came because this boy should be alive today … It’s time … to stop the madness. We will never let you forget the name of Stephon Clark until we get justice. This is about justice.

‘This brother could be anyone of us. This is not a Sacramento fight anymore, this is a national fight. Stephon has woken up the nation. We going to make Donald Trump and the whole world deal with the issues of police misconduct.’

Stephon Clark’s brother Stevonte embraces Rev. Al Sharpton as they speak at the funeral for his sibling who was shot dead by cops 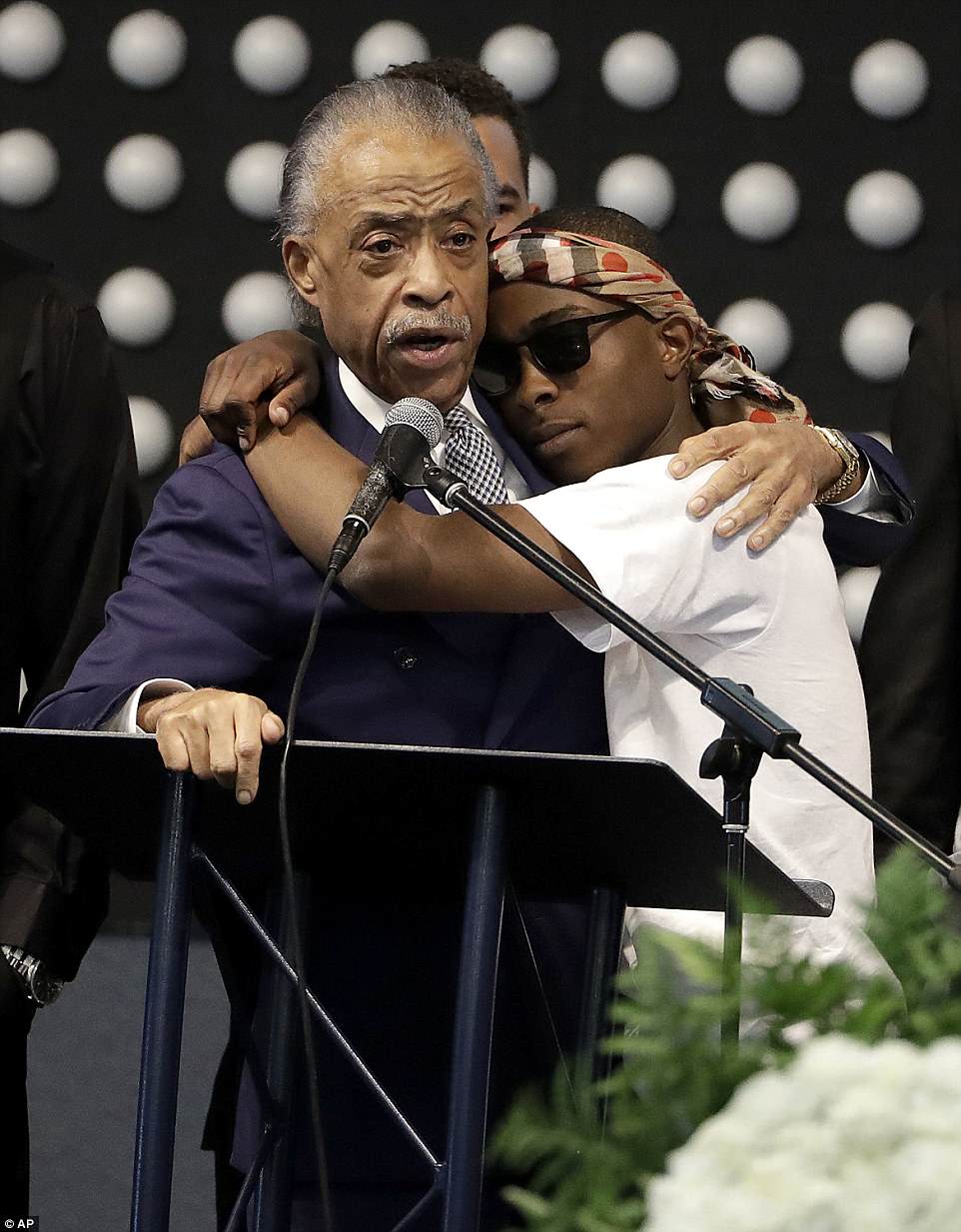 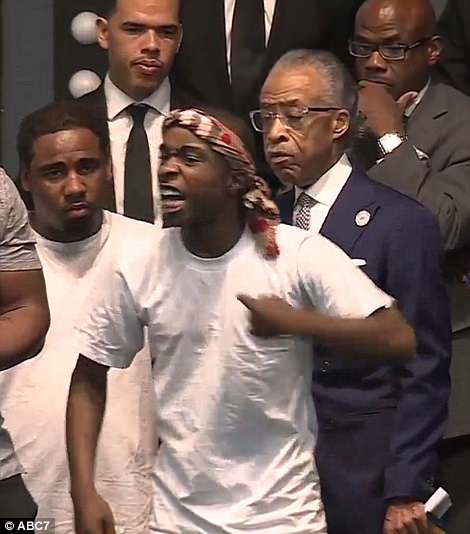 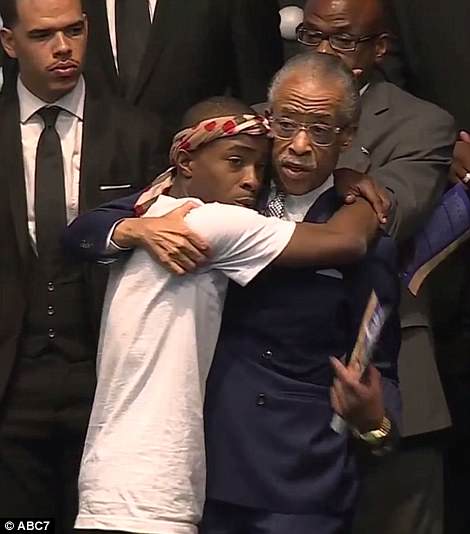 ‘You don’t tell people in pain how to handle their pain!’ Sharpton said as he led Stevante back to the mic with him. The duo are seen embracing right 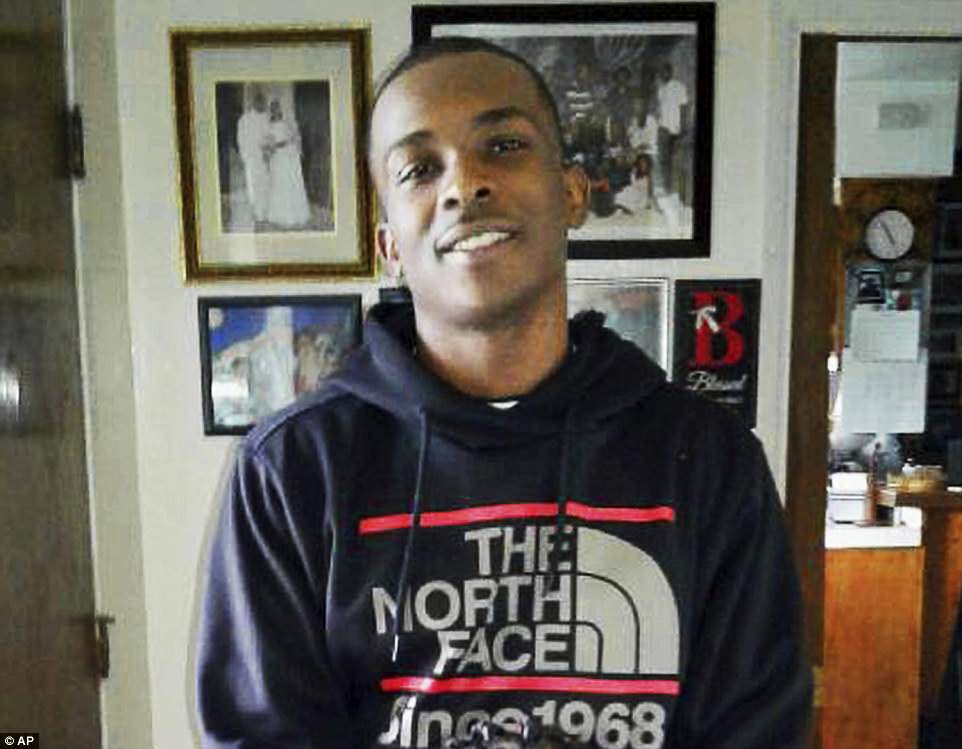 This March 18, 2018 photo, courtesy of the family, shows Stephon Clark at 5:20 p.m. in the afternoon before he died in a hail of police gunfire in the backyard of his grandmother Sequita Thompson’s home in Sacramento, Calif. On Monday, March 26, Thompson called for changes in the way police confront suspects, such as sending in a police dog, using a Taser, or aiming for an arm or leg when shots are fired

Clark was shot dead on March 18 after two police officers fired 20 shots at him in the backyard of his grandmother Sequita Thompson’s home in Sacramento.

Police had been responding to a report of someone breaking car windows in the area. They said they thought he was holding a gun, but he was found only with a cellphone.

Sharpton also praised protesters who have been out in force the streets of Sacramento every day since Clark’s death calling for police officers to fact charges over his shooting.

‘They were not violent. They would not shoot at anybody 20 times,’ he said of the demonstrators. ‘They didn’t take anybody down. We saw the video. Do the right thing. We will never let you forget the name of Stephon Clark until we get justice.’

He added: ‘I want the folk in California to know there is nothing wrong with the way these young people are standing up. They are trying to express their pain. We got their back!’

As the funeral started, a grieving Stevante was seen greeting other mourners by walking around the congregation and giving handshakes, hugs and kisses before kissing his brother’s casket, which was surrounded by a heart-shaped floral arrangement that read: ‘Rest in Power.’

Other family members took turns to share their memories of Stephon Alonzo Charlie Evan Atheo Clark, who was affectionately known as ‘Big Papa’.

His sister remembered how she would sometimes do his homework while he took honors classes at Sacramento Charter High School. 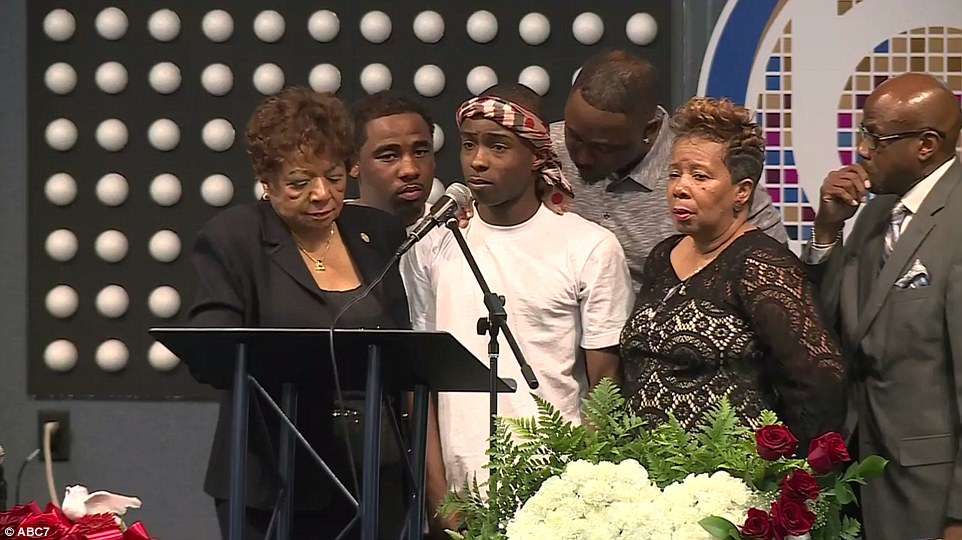 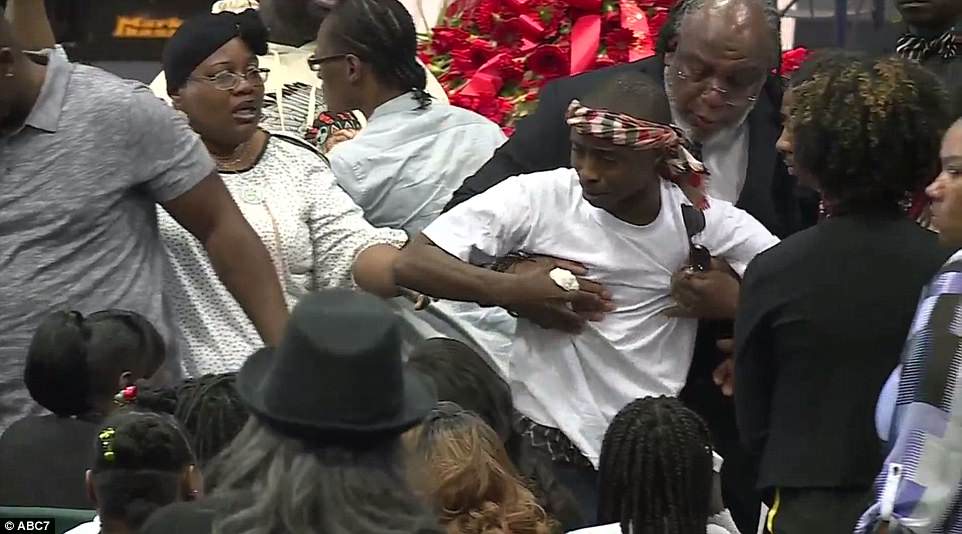 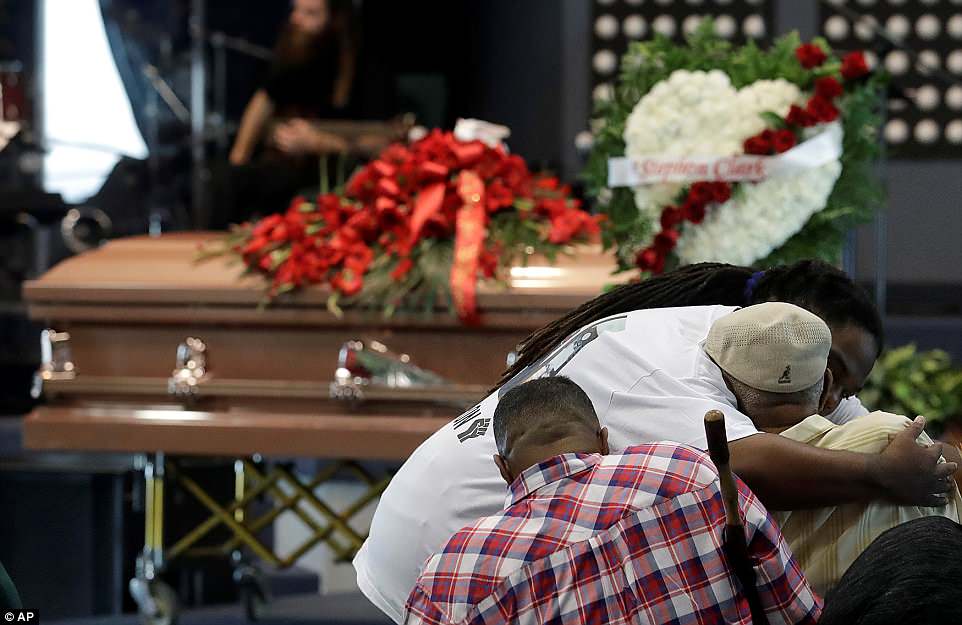 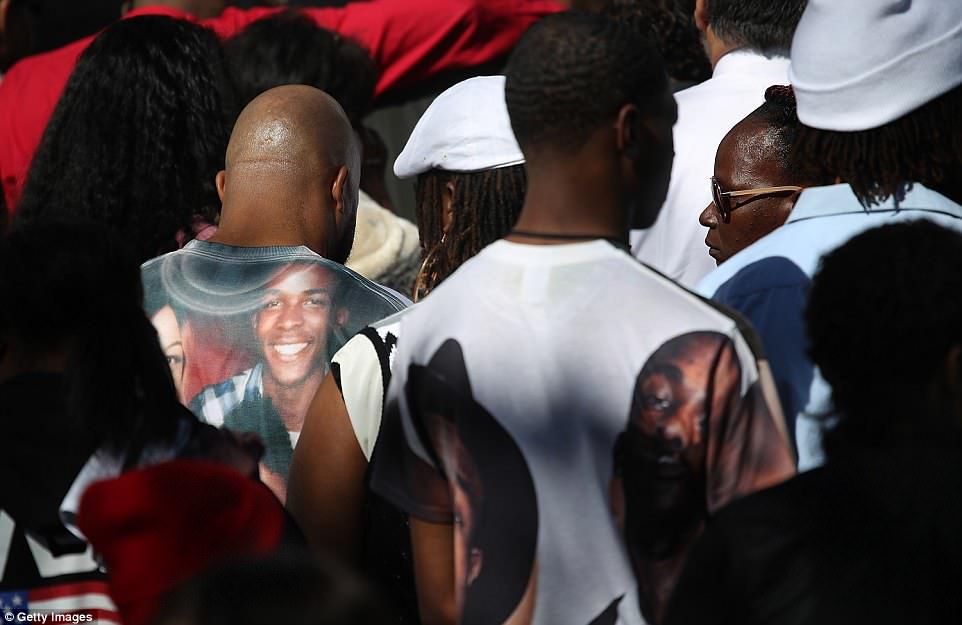 Some mourners at Wednesday’s wake for Clark predicted increased unrest beyond the unruly but mostly nonviolent protests that have disrupted traffic and two professional basketball games since the March 18 shooting.

The Rev. Ray Morsheth of Sacramento Revival Center previously said would stay away from the funeral for fear things could turn ugly, while the Rev. Phillip Goudeaux of Calvary Christian Center called it a time for peace and forgiveness.

‘I am very concerned about the climate and what’s going on right now,’ Goudeaux said of the high emotions since Clark’s death.

Mourners in attendance to the wake on Wednesday called for police to face criminal charges and donned black shirts calling for justice. One woman was seen wearing ‘Black Lives matter’ earrings.

Beforehand Stevante had to be held back by friends as he screamed at the media outside the wake for his sibling, who was shot 20 times by cops who said they mistook his cellphone for a gun.

He moved towards reporters set up outside the Bayside of South Sacramento church and shouted at them to ‘go away’ because they ‘don’t care’ about his family.

A security guard ran over to intervene before one of Clark’s friends pulled him away towards the church where his family were already gathered.

Several minutes later Clark came back outside to heckle reporters – who were allowed to set up outside a public wake – but was quickly carried away. 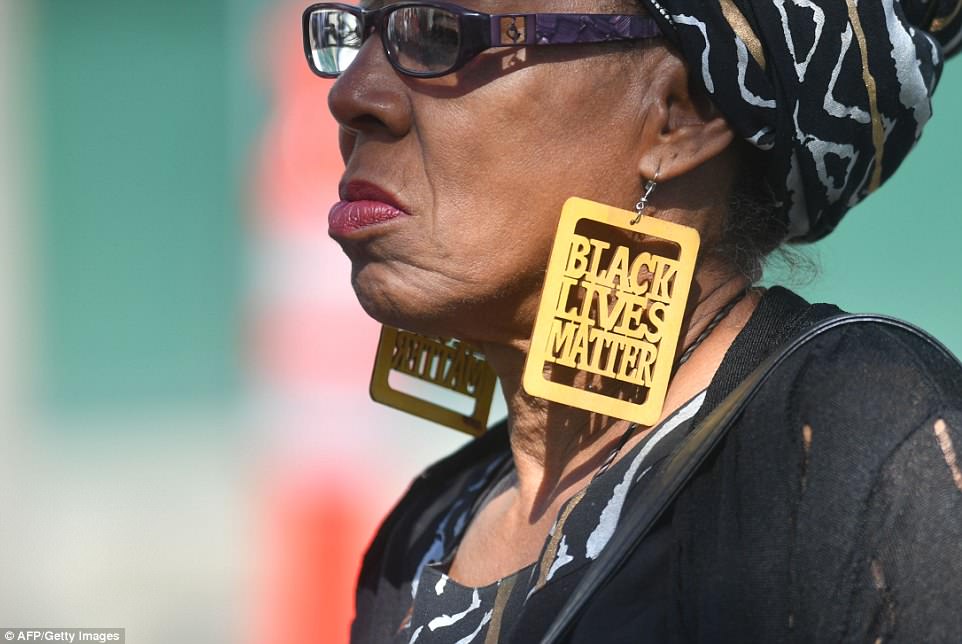 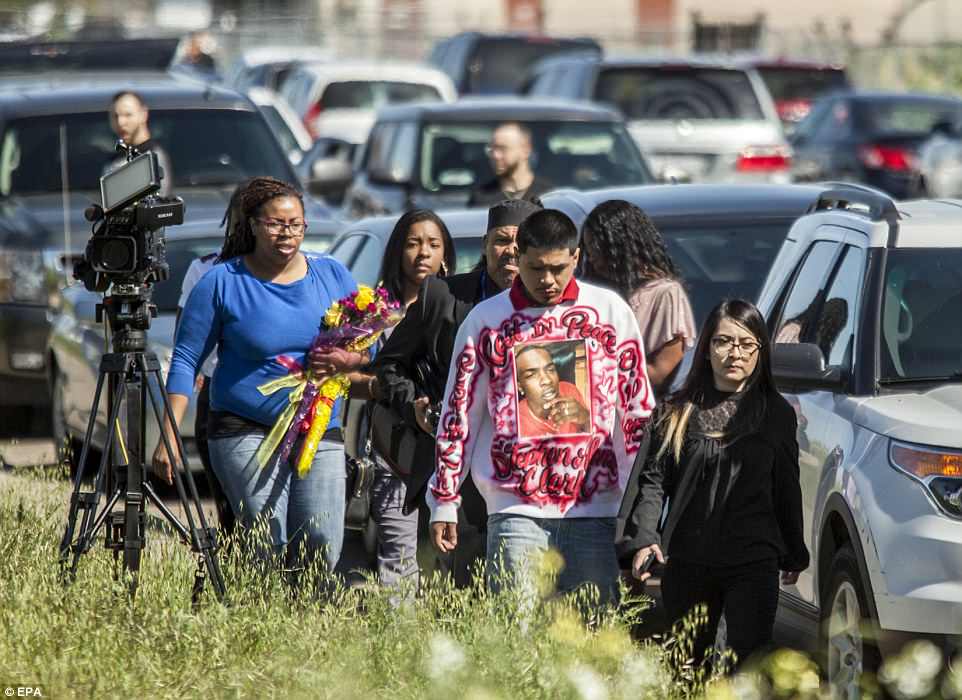 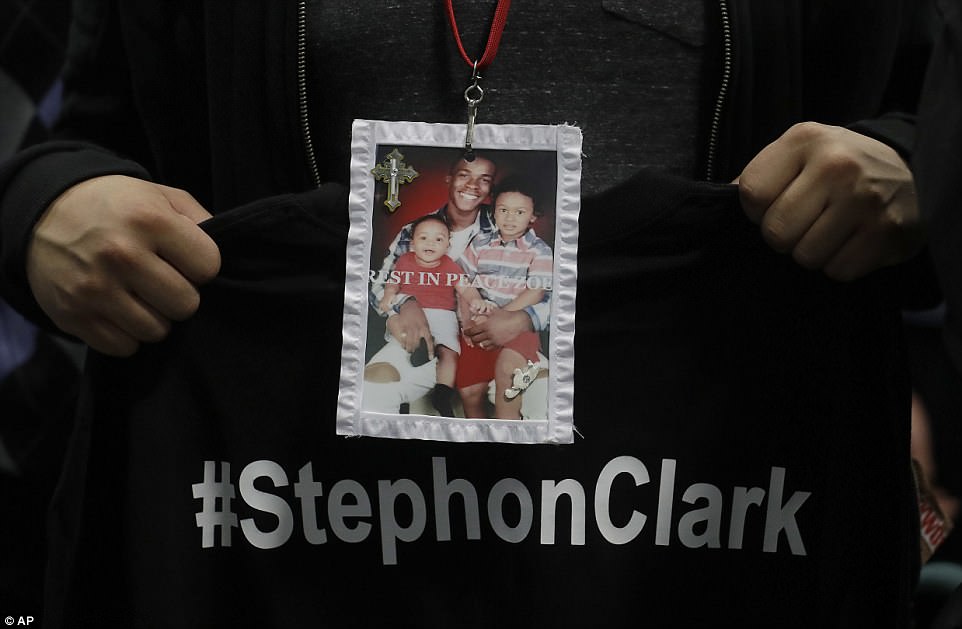 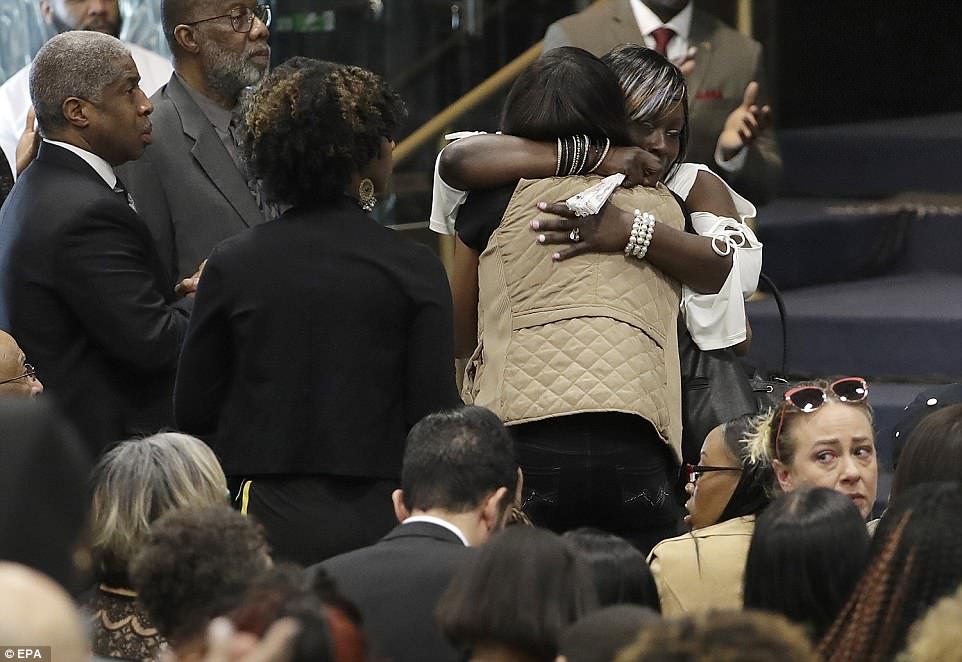 Friends and family gathered today to pay their respects for Clark, an unarmed black man killed by Sacramento police in his grandparents’ backyard a week ago 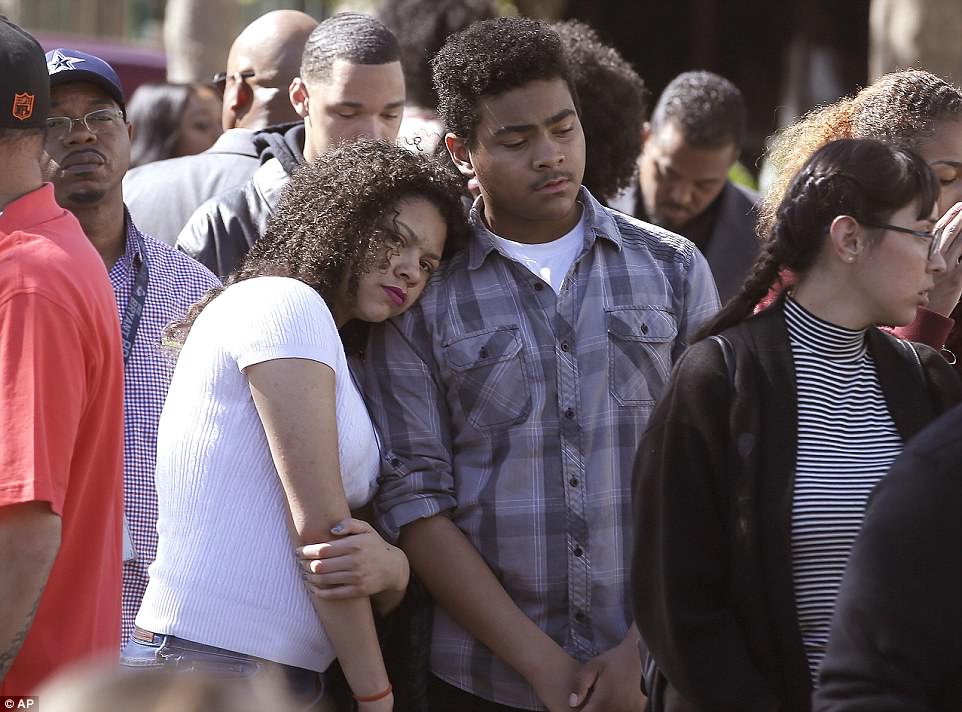 That evening Stevante clashed with Don Lemon during an uncomfortable live interview about his brother’s death.

The distraught sibling repeated ‘say his name, say his name’ as the CNN anchor asked him to talk about his brother and hit out against the media for ‘following us everywhere we go’.

Lemon said ‘I know you are in grief’ before Clark moved on to discuss how he had teamed up with Sacramento’s mayor to build a library and recreation center in his sibling’s memory.

As the ceremonies took place, angry protests continued on the streets of the California state capital, with Black Lives Matter activists demonstrating outside the office of Sacramento district attorney Anne Schubert.

Protests have been held almost daily and marchers have twice blocked fans from entering the NBA arena downtown for Sacramento Kings games.

There were also protests over Clark’s death in New York, with Black Lives Matter activists carrying banners and chanting slogans through Times Square. 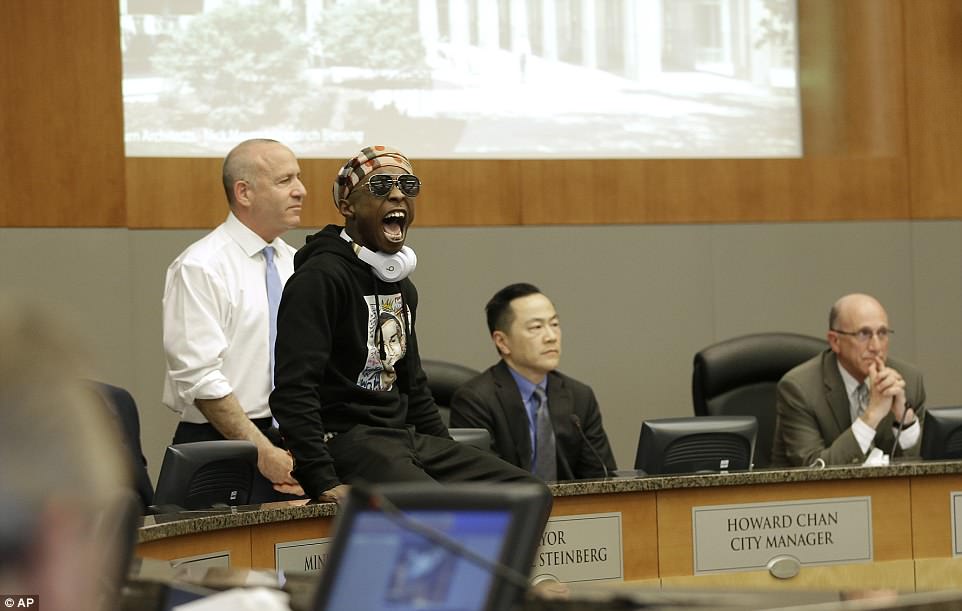 Stevante Clark disrupted a city council meeting on Tuesday, jumping on the platform and chanting his brother’s name at Mayor Darrell Steinberg 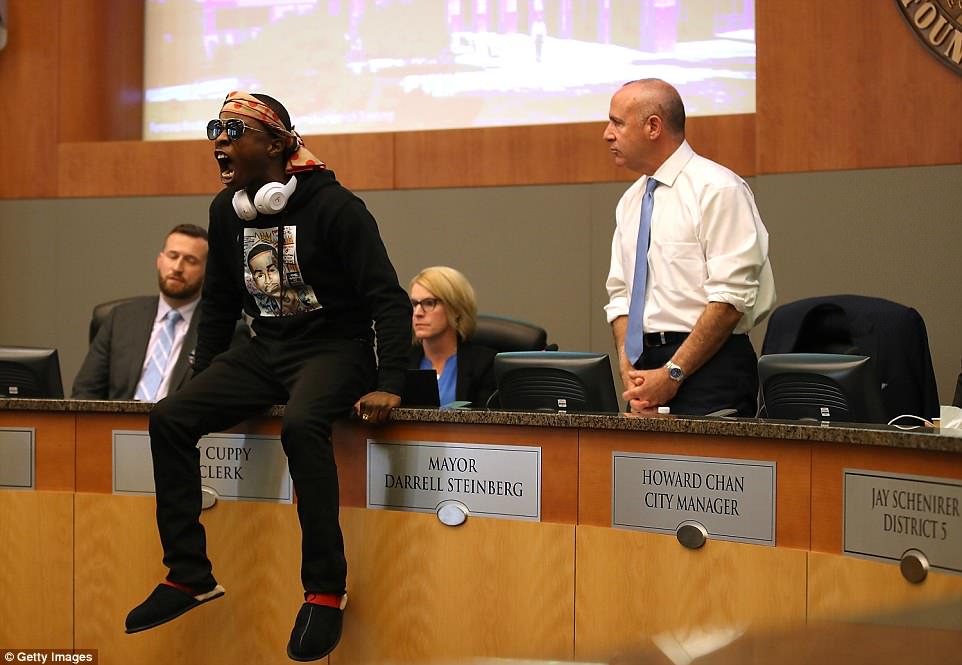 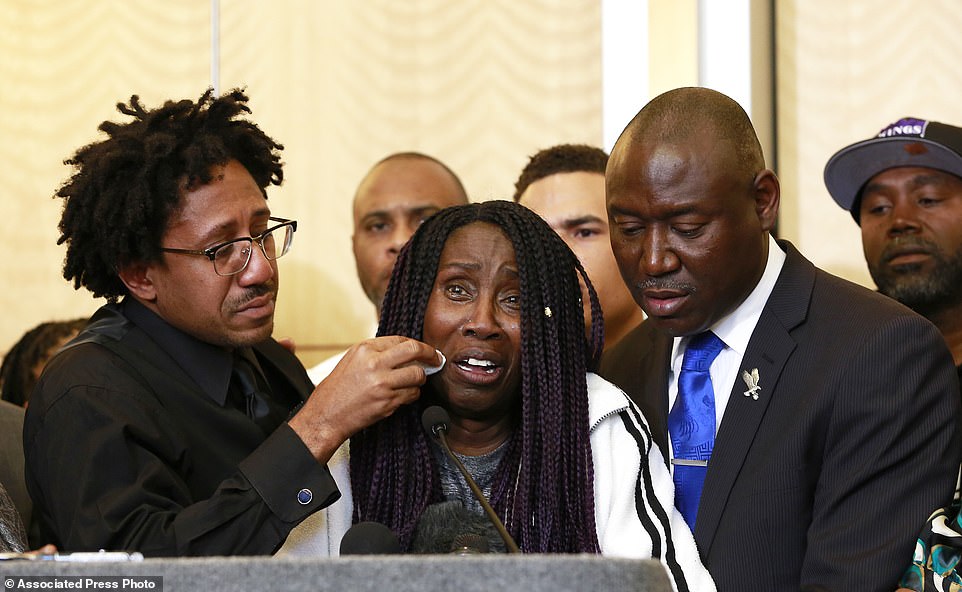 As Sequita Thompson, center, discusses the shooting of her grandson, Stephon Clark, Clark’s uncle, Curtis Gordon wipes a tear from her cheek during a news conference on Monday 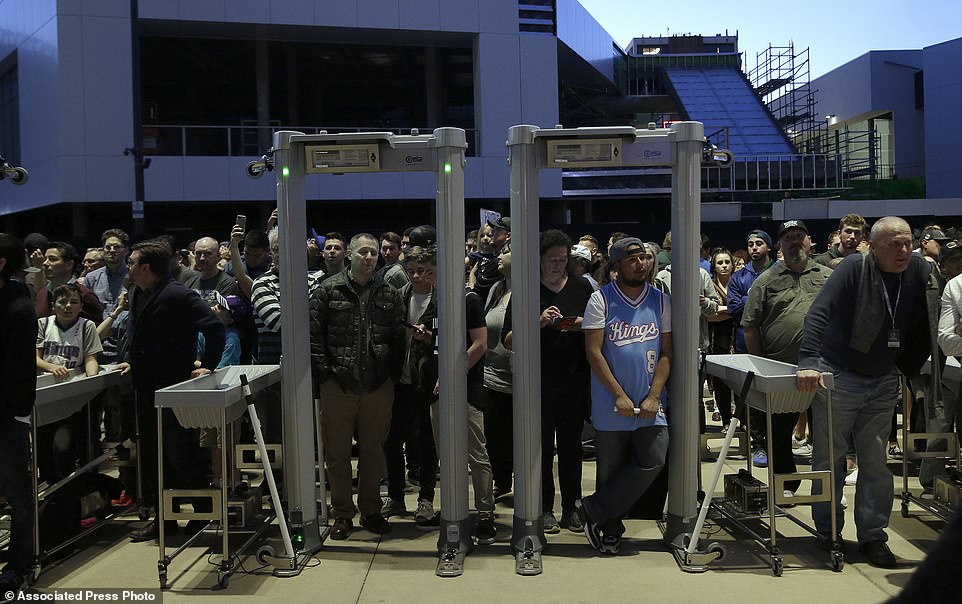 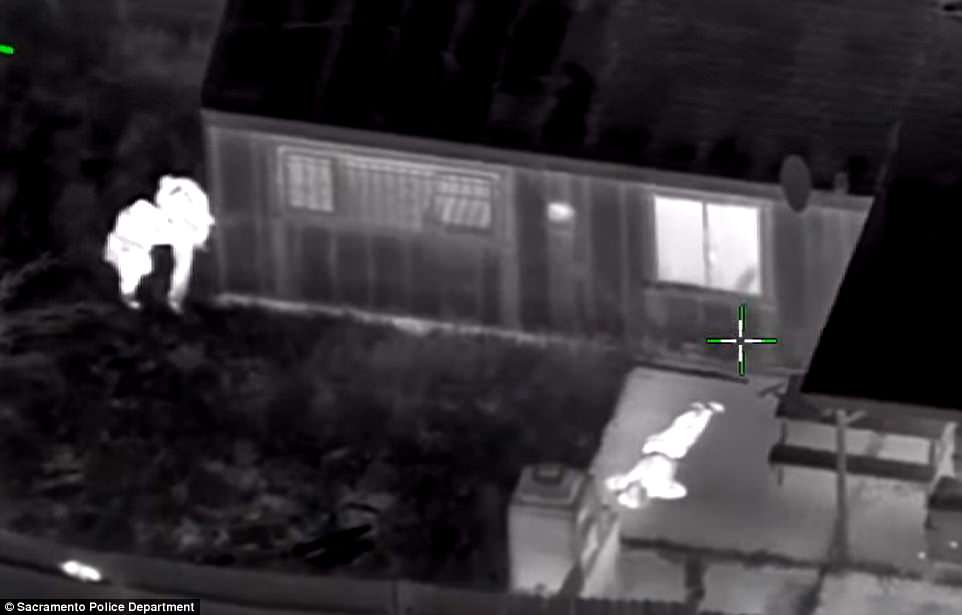 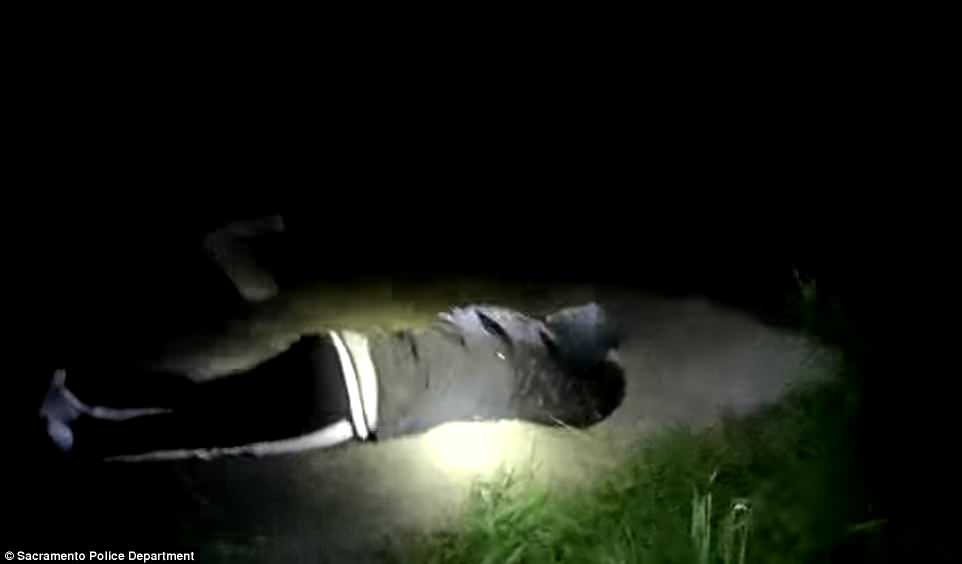 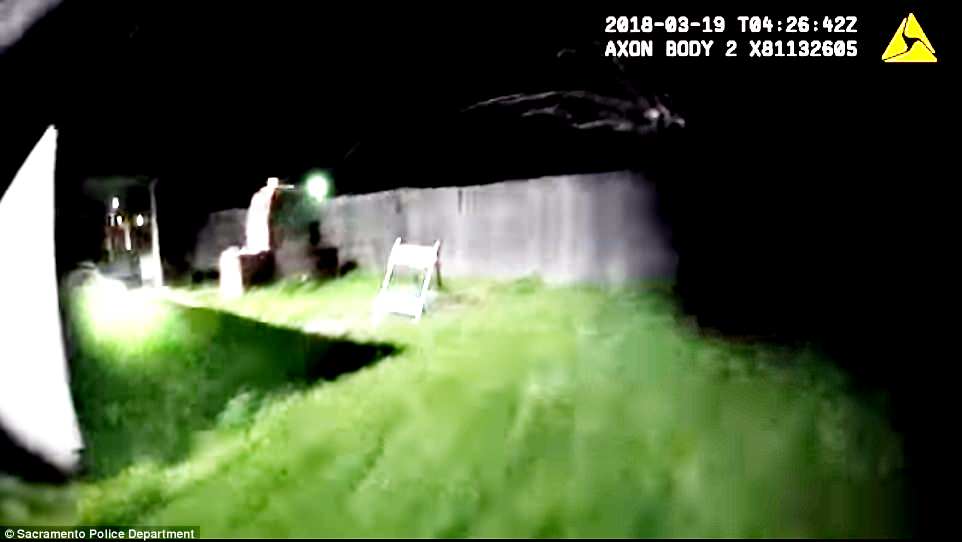