Sadiq Khan admitted he has failed to provide ‘proper leadership’ as he opens up about how lockdown has affected his mental health.

The London Mayor said that he was used to stressful situations, but the past 10 or 11 weeks had been ‘the hardest of [his] professional life, in relation to the loneliness’.

‘I’ve found it really tough,’ he said in a interview with The Times. ‘So, for eight weeks I didn’t leave, literally, my home and Tooting Common. That’s it. I thrive on company, on being out and about. And I was struggling.’

When asked if it had affected his mental health, Mr Khan said: ‘I’ve got no doubt it did. In the sense of just feeling a bit down. There are days when I’m not providing proper leadership. I definitely … I felt fragile.’

The interviewer said that when she met the London Mayor in City Hall he had been checking whether his trousers still fit for the occasion – which was only the third time he had put them on in 11 weeks.

Mr Khan added: ‘Being a leader is lonely. And I’ve struggled. I also realised I should feel confident talking about it. I shouldn’t feel that I’ve got to be this alpha male who demonstrates his virility by being superhuman. I’ve got to be honest because, you know, I have struggled.’

The London Mayor said that he was used to stressful situations, but the past 10 or 11 weeks had been ‘the hardest of [his] professional life, in relation to the loneliness’

When asked if he had cried, Mr Khan admitted he was ‘a cried’ who could ‘cry in a film’.

Mr Khan was not invited to a meeting until March 16, even though he had written to the health secretary asking to be involved in Covid planning in February. The Mayor said he had no doubt they were keeping him in the dark on purpose.

Speaking on the environmental opportunity the crisis offers the capital, Mr Khan said that, although it was an ‘awful, awful’ virus that led to lockdown, there is a potential silver lining in the possibility of converting Londoners to greener forms of transport like walking and cycling.

On the topic of the protests that have erupted across the world following the killing of George Floyd in America, Mr Khan said he endorsed Black Lives Matter, and he likely would have joined the demonstrations had it not been for coronavirus.

Mr Khan said when he saw police officers at Black Lives Matter protests kneeling in solidarity, he was ‘proud that they had the confidence to express their feelings without worrying about being disciplined’.

It comes after Mr Khan announced he would slash his own pay by 10 per cent as he warned coronavirus has caused a £500million hole in London’s finances. 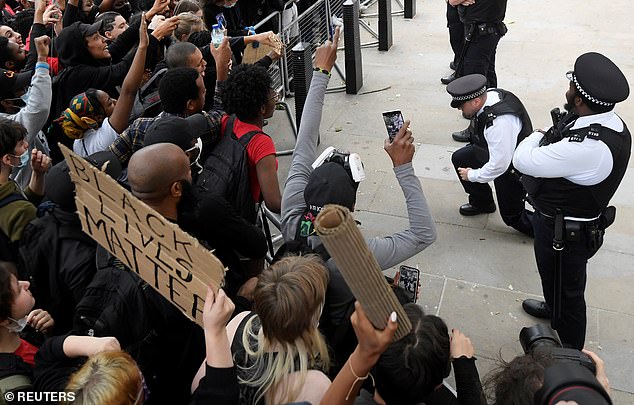 Mr Khan said when he saw police officers at Black Lives Matter protests kneeling in solidarity, he was ‘proud that they had the confidence to express their feelings without worrying about being disciplined’

On Wednesday the mayor revealed he is reducing his salary by more than £15,000 as he threatened cuts to police, fire services and the Tube unless the government bails the capital out.

Concerns have been mounting about the impact of lockdown on the economy, with fears GDP will plunge by a third this quarter as the UK endures the worst recession in 300 years.

Mr Khan has been heavily criticised for slow progress in getting transport services in the capital to full levels, with images of workers packed in to carriages.

The government has already offered a £1.6billion injection to shore up Transport for London, while slamming the ‘pre-existing poor condition’ of its finances.

But Mr Khan said the GLA, in common with other authorities across the country, faces a £493million budget shortfall over the next two years, due to loss of business rates and council tax income from coronavirus.

There have also been costs to ‘support Londoners during the pandemic’, he insisted. 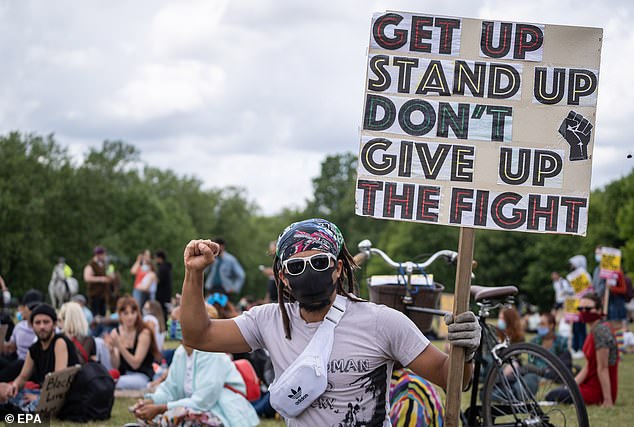 Activists, some wearing face masks as a precautionary measure against Covid-19, hold placards as they attend a BLM protest in Hyde Park, central London, June 20

He suggested the shortfall will undermine the government’s efforts to recruit 20,000 new police officers across the UK and overhaul the London Fire Brigade after Grenfell.

Mr Khan is currently paid £152,000 a year, and his decision to take a cut could heap pressure on ministers to follow suit. Politicians in New Zealand have taken a temporary cut.

The mayor’s 15 direct political appointments will also have pay freezes.

Mr Khan claimed London’s finances were in ‘great shape’ before the pandemic – something hotly disputed by his critics – but have been ‘devastated’.

He said: ‘Londoners did the right thing to tackle Covid-19 by following the rules, staying at home and helping to save lives. But now the Government is punishing them with a new era of austerity.

‘TfL’s fares income has dropped by more than 90 per cent and local business rates and council tax income has fallen off a cliff.

‘This is the worst possible time for a return to austerity – just when we need to invest in London’s recovery.

‘Unless Ministers act, the current number of police officers will need to be reduced and it will be impossible to tackle youth violence or make the changes to the London Fire Brigade that are desperately needed after the awful Grenfell Tower tragedy.

‘I didn’t enter politics to administer government austerity, and I will do everything in my power to persuade ministers not to force another era of austerity on local and regional government.

‘Whatever happens I will protect the frontline services that Londoners depend on as much as possible – and it’s only right that I should volunteer for an immediate pay cut in these extremely difficult circumstances and continue not to take any pension contributions.

‘In addition, I have taken the decision to freeze the salaries of my political appointments at City Hall.’