Now you WON’T have to socially distance in lifts: Workers will be allowed to pack into elevators because it would take HOURS for people to get into offices

There is one place where it’s now acceptable to ignore social distancing rules.

Safe Work Australia amended its coronavirus guidelines on Wednesday to abolish the four square metre per person restrictions in lifts.

The revised rules allow workers to pack into elevators as thousands of employees prepare to gradually return to their workplaces in the coming weeks.

‘There is no requirement to provide  four square metres of space per person in lifts, however you must still ensure, as far as you reasonably can, that people maintain physical distancing in lifts and lift waiting areas,’ the revised guidelines states.

High rise office tower landlords and the property industry have welcomed the changes, where elevators were reduced to only two people at any one time under 1.5 metre social distancing rules, which were described as unworkable.

Safe Work Australia has revised  its social distancing guidelines for elevators after concers workers would be forced to wait in queue. Pictured are residents queuing to get into the lifts

‘The new guidelines on lift usage are sensible and practical, and give our building owners, managers and their tenants the certainty they need to plan their return to the office in coming weeks,’  Property Council of Australia chief executive Ken Morrison said in a statement.

‘It recognises that people spend only short periods of time in a lift each day, and much less than the 15 minute period, which is the threshold for the COVIDSafe app handshake.’

‘The guidance rightly emphasises the need for measures to mitigate the risk of spreading COVID-19, and also highlights a number of complementary measures that will contribute to a safer workplace environment.’

Mr Morrison acknowledged other challenges do remain, including the need to maintain working from home arrangements for some workers, stagger arrival times to workplaces to avoid travel peaks and using technology to reprogram lifts for more efficient travel. 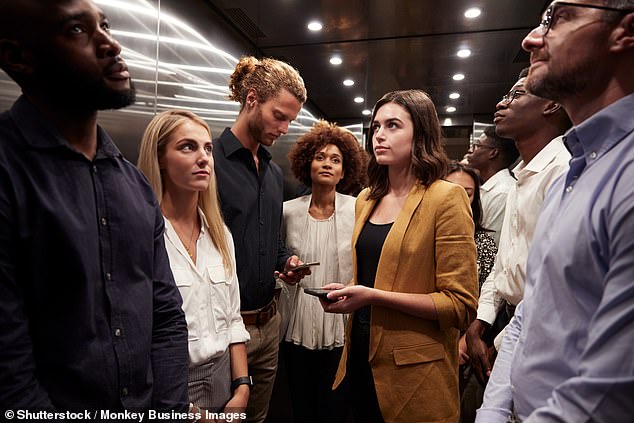 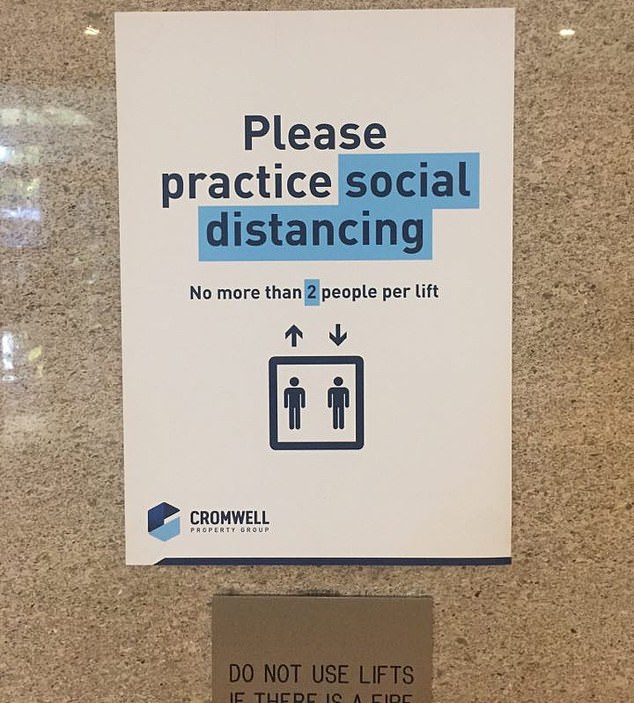 Safe Work Australia has abolished the four square metre per person restrictions in lifts. Pictured is an elevator sign at the Symantec House office tower in Sydney’s CBD

Australia’s largest office landlord welcomed the revised rules, where workers would have waited up to three hours to get into the lift when they returned to work at office towers such as Sydney’s Australia Square.

Dexus recently surveyed 700 tenants, where up to 43 per cent of staff are expected back in office by June.

‘It is a far more sensible approach because it is all about the worker experience when we get back to work full time and this would have been a major detractor, spending a significant amount of time waiting for lifts,’ Dexus chief executive Darren Steinberg told the Australian Financial Review. 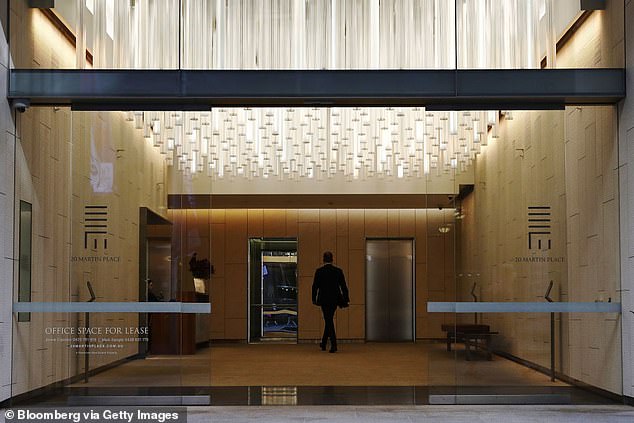 There will be increased demand on lifts as workers gradually return to offices in the coming weeks. Pictured is an office tower in Sydney’s Martin Place

JLL, which manages more than 500 office buildings and shopping centres across Australia warned workers could be forced to wait their turn in lobbies.

‘I’m going to have to put in place a queueing channel,’ he recently told the Australian Financial Review.

‘I’ll put marks on the floor 1.5 metres apart with ‘Stand here’ and I’ll put a guy in the lift lobby and he will be the only person that will press the button.’