Sailor on USS Roosevelt is found unresponsive with coronavirus

BREAKING NEWS: Sailor from USS Roosevelt is found unresponsive in isolation on Guam base after testing positive for coronavirus a week after its captain was fired for sounding the alarm

A sailor from the USS Roosevelt – the COVID-19 infected Navy ship which a captain was fired from for sounding the alarm – has been found unresponsive in isolation on a Guam military base after testing positive for the virus.

No details about the sailor have been released aside from that they tested positive for COVID-19 on March 30.

Since then, they have been in isolation on land.

They were found unresponsive in their room on Thursday morning and have been taken to the Naval Hospital on Guam where they are in intensive care.

It has caused a military row after Captain Brett Crozier – the former captain – was removed over a letter he wrote to top brass asking them to allow him to evacuate the crew because he was concerned about the spread.

A sailor from the USS Roosevelt (pictured docked on April 7 in Guam) was found unresponsive in isolation on Thursday morning. The sailor tested positive for coronavirus on March 30. They have since been isolating on the military base in Guam

The letter was leaked to the media and Crozier was instead removed from his post last Thursday.

The crew cheered and saluted him as he left the ship.

He was later accused by Acting US Navy Secretary Thomas B. Modly of weakening the military’s position by publicly revealing that the ship’s crew had been compromised.

Modly called him ‘naive and stupid’ during an address to the ship’s crew about the scandal and was heckled by the sailors for his unkind remarks.

He has since resigned.

There have now been 416 positive cases of coronavirus on board the ship.

Captain Crozier is among those infected.  In his letter to top Navy brass, he begged them to allow him to evacuate the ship.

‘We are not at war. Sailors do not need to die,’ he wrote.

The memo was leaked to the press and Crozier was then accused of harming national security. 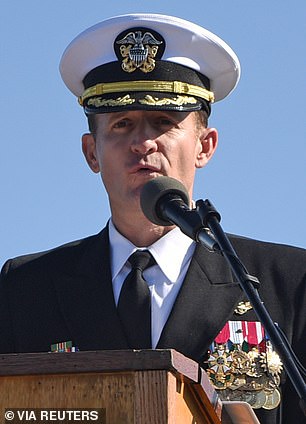 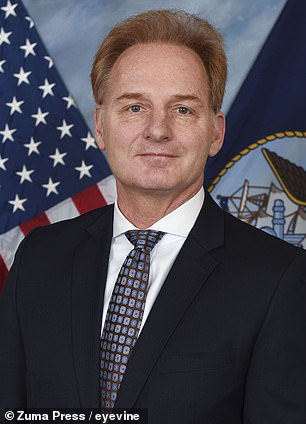 Captain Brett Crozier (left) was fired for writing a memo which raised concern about the infection on the ship. Former Acting US Navy Secretary Thomas Modly (right) called him ‘naive and stupid’. He has since resigned

As he left the ship last Thursday, thousands of sailors on board saluted him and cheered his name.

When Modly arrived in Guam shortly afterwards to give a briefing on the decision, the crew heckled him.

One secretly recorded him calling Crozier naive and stupid. He has since apologized for the rhetoric and has resigned.

Trump initially sided with Modly and said he was right to strip Crozier of his position.

He has since distanced himself from the scandal and said he heard Crozier is a ‘great guy’.

Modly stepped in after former US Navy Secretary Richard Spencer was fired from the post for protesting President Trump’s decision to intervene in the case of Eddie Gallagher, a Navy SEAL who was accused of war crimes but acquitted of the most severe ones.